I’ve perfected vegan taco meat! Seriously, if you’ve gone vegan but have a craving for beefy tacos, then this recipe is for you!

I grew up in Texas. Which means I ate my fair share of Tex-mex. So, when I went vegan, I had to make sure my taco cravings were covered.

Taco meat is something I haven’t had in years. Especially, proper taco meat. Because, before I went vegan I was living in NYC and they simply don’t have the kind of Mexican food I’m used to.

So, when I found vegan ground beef for my vegan taco meat recipe with it, I was thrilled. It’s a perfect substitute, especially considering no one was hurt to make it.

The Perfect Vegan Taco Meat Base 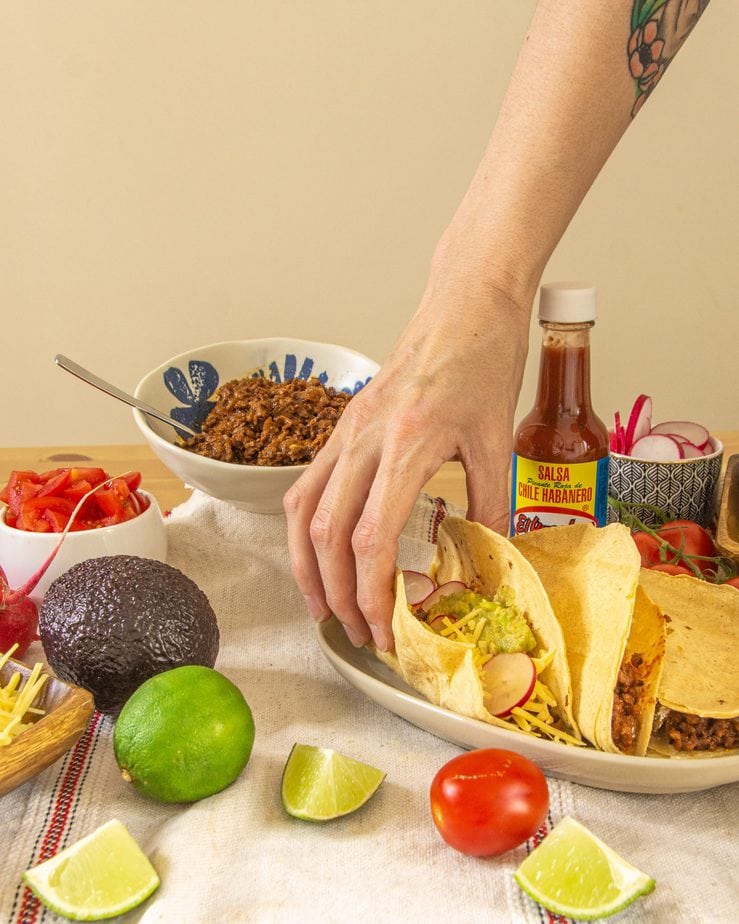 I’ve use to make this recipe with tofu and it was tasty, but the texture was slightly mush.

I recently discovered a few vegan mince meat replacement product that are perfect for this recipe. They’ve taken my tacos to the next level.

Funny enough, one of the products is called Next Level Hack and it’s available at Lidl stores.

This product is scarily similar to ground beef, or mince as they call it here in Europe. It’s made from vegetables, pea protein, soy protein, and wheat protein. It looks very much like minced meat with a slightly more pale color. The texture of the raw mince is more firm that the “real” deal, but once cooked it’s very convincing…as far as I can remember anyway.

Plus, as an added bonus the package is 100% recyclable and climate neutral.

It’s perfect for tacos, burritos, enchiladas, beefy quesadillas, nachos and any other Mexican concoction you can imagine.

Like tofu, it doesn’t have much flavor on its own. So, you can pretty much flavor it how you like.

TVP is high in protein and iron, and low in fat. It’s also absurdly cheap. So, if you’re on a budget this is an excellent product to have in your vegan pantry. It’s super diverse and I even use it in my delicious vegan bolognese recipe.

For this vegan taco meat I’d suggest rehydrating it with a mixture of water, olive oil, vegan beef bouillon (or miso paste). This combination will flavor the TVP and be perfect for this recipe. Here are the measurements:

Mix the water, miso/bouillon, and oil until well incorporated and there aren’t any lumps. Add the TVP crumbles and mix well. Set aside until it’s ready to use.

Other Vegan Options for this Vegan Taco Meat

Of course, Next Level Hack and TVP aren’t the only optimal vegan meat options on the market. Different brands will be available depending on where you live. Choose your favorite option and use it as instructed in the recipe below.

Additionally, you can use extra firm tofu or minced up tempeh in this recipe. It’s really up to you which protein to use!

How to Serve Vegan Taco Meat 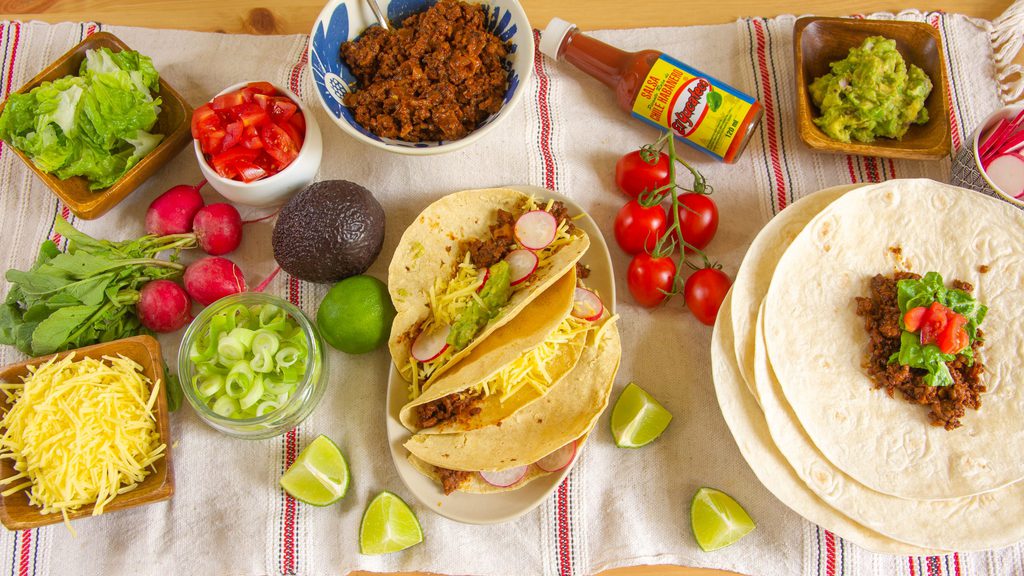 These tacos can be topped with all kinds of ingredients. Lettuce, vegan cheese , tomato, green onion, radish slices, vegan sour cream, or guacamole. Whatever your tastebuds fancy, go for it!

You can even make tacos with corn or flour tortillas. If you opt for the latter, I do suggest making a burrito instead. And if you want to bring it to the next level, grill the rolled burrito on a grill pan for an extra crispy crunchy exterior. Trust me, it’s worth the extra few minutes!

You can also pair these tacos with hot sauce or salsa. Make a side of rice and beans, and you have created the perfect vegan Tex-mex feast!

Everyone Loves This Vegan Taco Meat 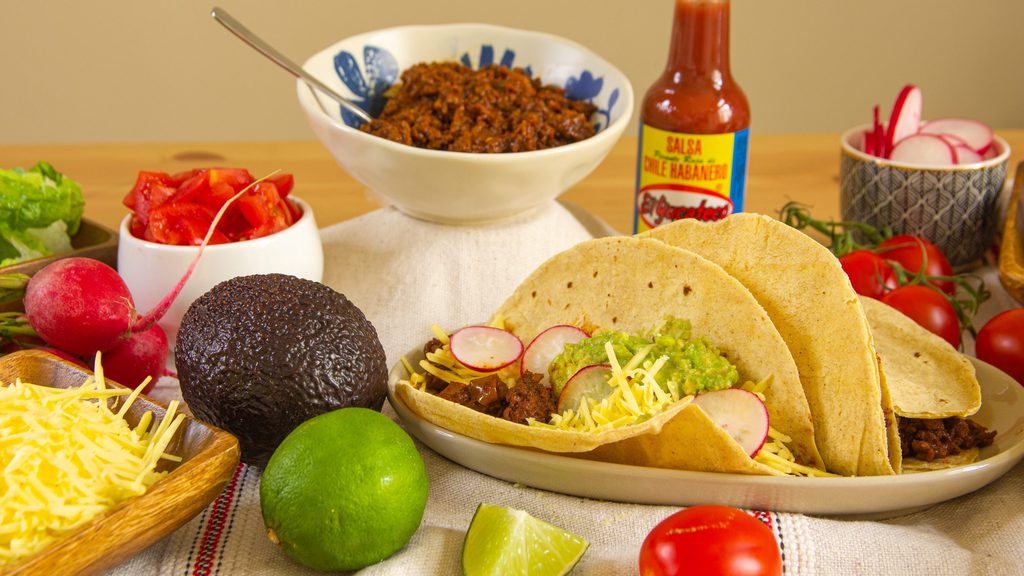 I recently brought this taco meat to a garden party for a friend’s birthday celebration. Three vegans and four non-vegans were at the part. As is usually the case, the non-vegans wanted to sample the vegan meat. Luckily, they were polite enough to wait until us vegans had finished eating.

The verdict? Vegans and omnivores alike gave this mixture two thumbs up!

Is This Recipe Really Fast?

Don’t worry! Just because these tacos are incredible, it doesn’t mean they take forever to make. You can have tasty vegan taco meat in under 30 minutes! Just watch the above video and you can see for yourself.

So, without further ado…here’s is my Vegan Taco Meat Recipe!

Enjoy this taco meat on corn tortillas or flour tortillas. Top with lettuce, tomato, guacamole, hot sauce, radishes, or whatever your heart's desire. TVP Note: If using TVP use 1 cup of crumbles. Hydrate them in 1/2 cup boiling water before adding them to the mix. 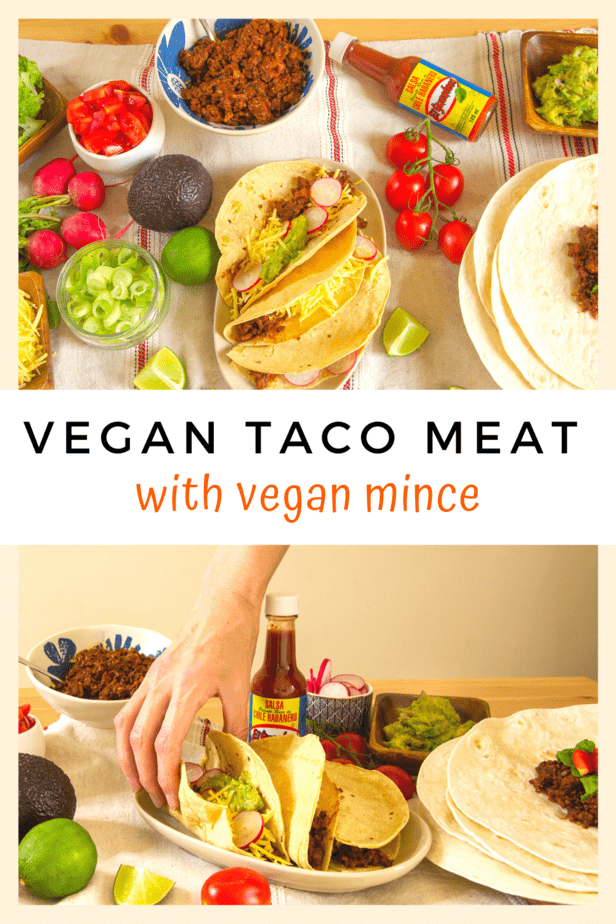 If you’re looking for a vegan breakfast taco recipe…I have you covered there too. Click here for the recipe.