Vegan bolognese sauce. Let that roll around on your tongue; marinate in your mind. How is it possible to make a meat sauce vegan? Can it ever be like the real thing?

Considering meat is only one ingredient in bolognese sauce, and there are plenty of excellent vegan meat replacements out there, I’m going to say the answer is yes.

Now, the bolognese sauce I ate in Bologna Italy was pretty oily, and I’m not going to lie here. There currently aren’t vegan meats that will give you the same mouthfeel and meaty flavor. That said, I have a few tricks up my sleeve that will duplicate the rich, complex flavors that you’d expect in a bolognese sauce. Plus, all of the other ingredients in this hearty sauce are already vegan. So, I don’t have to totally reinvent the wheel to make exceptional vegan bolognese sauce! 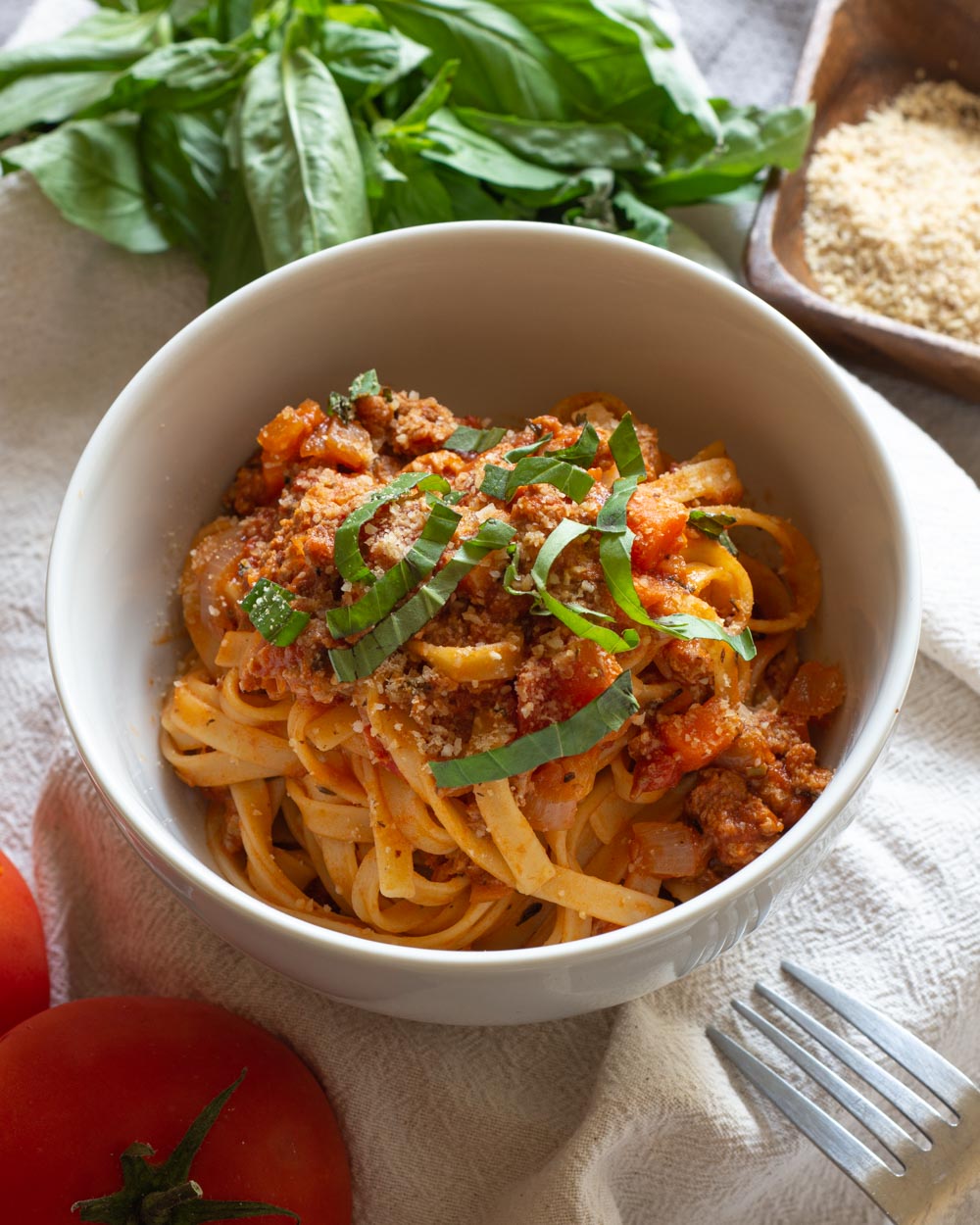 My Bolognese Obsession Started When…

I remember exactly when it started, this obsession with bolognese sauce. It wasn’t eating the RAGÚ branded sauce with ground beef I grew up on. It wasn’t when I visited one of the myriad Italian restaurants in NYC while living there. And it wasn’t when I made it at home with Rao’s sauce.

Nope, it was in the city which the sauce gets its namesake. Bologna Italy.

My sister and I visited in 2009. Though we’re six years apart in age, we managed to graduate from college at the same time. So, we took a trip to Europe to celebrate that included several places in Italy, one of which was Bologna. Obviously, when in Bologna, even if it does seem a bit cliché, one must eat bolognese!

The first time I ate it in a cozy little Italian restaurant I was blown away! The flavors, texture, oiliness, and ingredients were totally different from the spaghetti and meat sauce I’d been eating all my life. Hell, even the pasta was different. That first plate of bolognese with tagliatelle was level 10 good. It made me realize that what I had been eating previously was probably a four.

It became an obsession and I ordered it at least once every day I was in Bologna. If I’m being honest I ordered it twice in a day a few times.

Fast forward several years and my vegan self has started to crave this dish. So, I had to replicate it. Luckily, there isn’t much to change in the authentic Italian recipe. Plus, as far as vegan meat goes, I just discovered a product that serves as an excellent ground beef substitute!

What Pasta Goes with Bolognese? 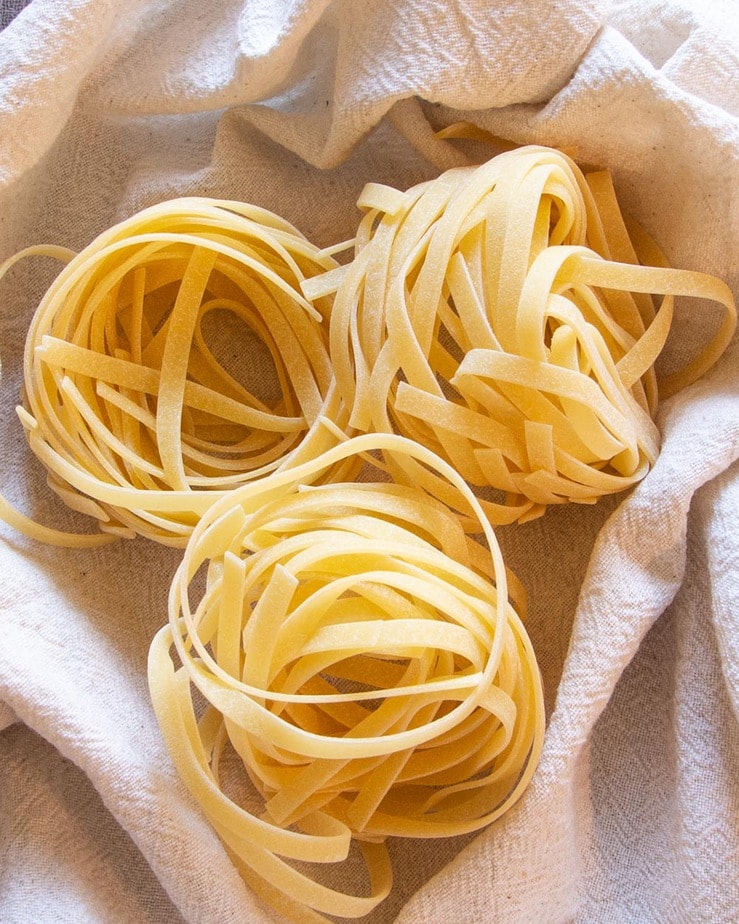 I grew up eating spaghetti with meat sauce. Little did I know this is not authentic at all. In fact, spaghetti isn’t even the right shape!

The preferred pasta for bolognese sauce is tagliatelle. If’ you’re not familiar with tagliatelle then you should know it’s a long, flat pasta. It’s hearty and pairs excellently with bolognese. Fresh tagliatelle usually contains eggs though, so if you’re going to hunt some down for this bolognese recipe, make sure to check the ingredients list before buying it.

Don’t worry, if you can’t find tagliatelle there are other options. Broad, flat pastas like pappardelle or even fettuccine are also totally acceptable pairings for bolognese. If you’re not in the mood for a long pasta, then rigatoni or penne are also good matches.

I think these pastas are the best options for my vegan bolognese sauce, but if you want to use spaghetti go for it. The pasta police aren’t going to break down your door any time soon over it. That said, whatever you do…please, please, please cook your pasta al dente. Soggy, overcooked pasta does deserve a visit from the authorities.

One more thing, please combine your pasta and sauce before plating it. Throwing naked noodles on a plate and topping it with the sauce is a huge missed opportunity. You need to give the pasta and sauce time to marry. This means adding the al dente pasta to the sauce and letting it cook for a a minute or two. The sauce gets a chance to grab on to the pasta, coat and absorb into it.  This won’t happen if you just throw everything on a plate separately. 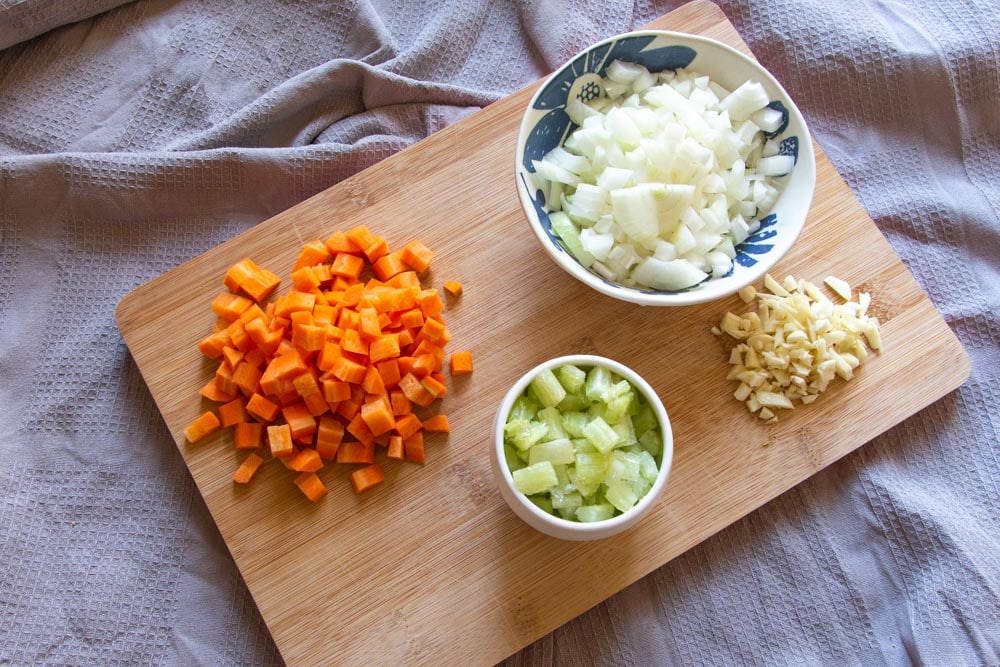 When I first learned carrots were used in bolognese sauce I was pretty blown away. It didn’t make sense to my uneducated brain. But carrots add a touch of sweetness to this sauce and gives balance to the acidic tomatoes. They 100% have to be included. Additionally, celery, onion, and of course tomato sauce are also mandatory.

Time is also another key ingredient for traditional bolognese. At minimum it should cook on a very low heat for three hours. I suspect the purpose is mainly to let the animal protein break down. That said, tomato sauce can also change over time and become more mellow and less acidic. So, even vegan bolognese sauce could benefit from time.

While you can get away with cooking my vegan bolognese sauce recipe for only 40 minutes, there may be some benefits to cooking it longer. I think you’d have to do this without the vegan meat as it would probably just turn to mush at some point. I will try it some day soon, so check back for updates.

Let’s talk about meat. Obviously, I’m not going to use meat in a vegan bolognese sauce recipe. So, what are the alternatives? I’ve seen a lot of options online including tofu, mushrooms and walnuts, and lentils. I’m sure those are decent enough but I wanted an option that would replicate the texture of ground beef. So, I chose TVP. 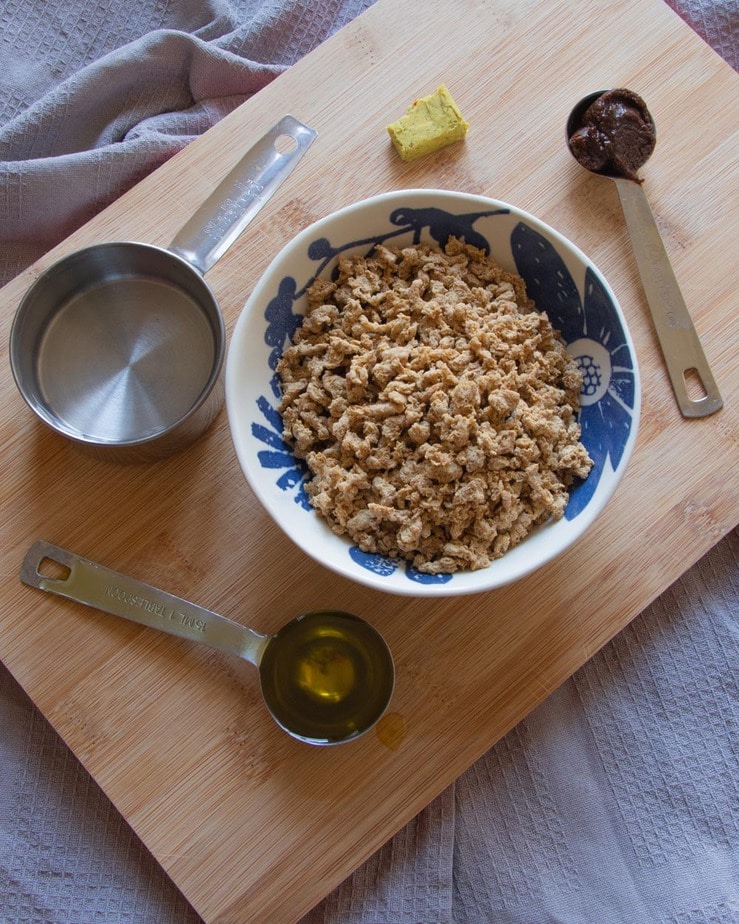 Okay, weird and unappealing name aside, TVP is actually a versatile and healthy substitute for ground beef. It’s usually made from soy, so if you’re in the anti-soy camp you’re not going to like this. I have nothing against soy so I can pretty much go wild with the stuff. And I do, because the texture is awesome. It’s chewy and has a nice mouth feel. The granulized TVP mimics ground beef exceptionally well.

This stuff is also cheap, like super cheap! So, I’ve been using it in a lot of different dishes, including my vegan taco meat recipe.

If you’ve never had it, now is the time. Just be sure to follow the instructions below cause you do have to rehydrate TVP. I did not follow instructions the first time I tried TVP and ended up with a big gloppy mess that resembled dog food, which put me off the stuff for years. 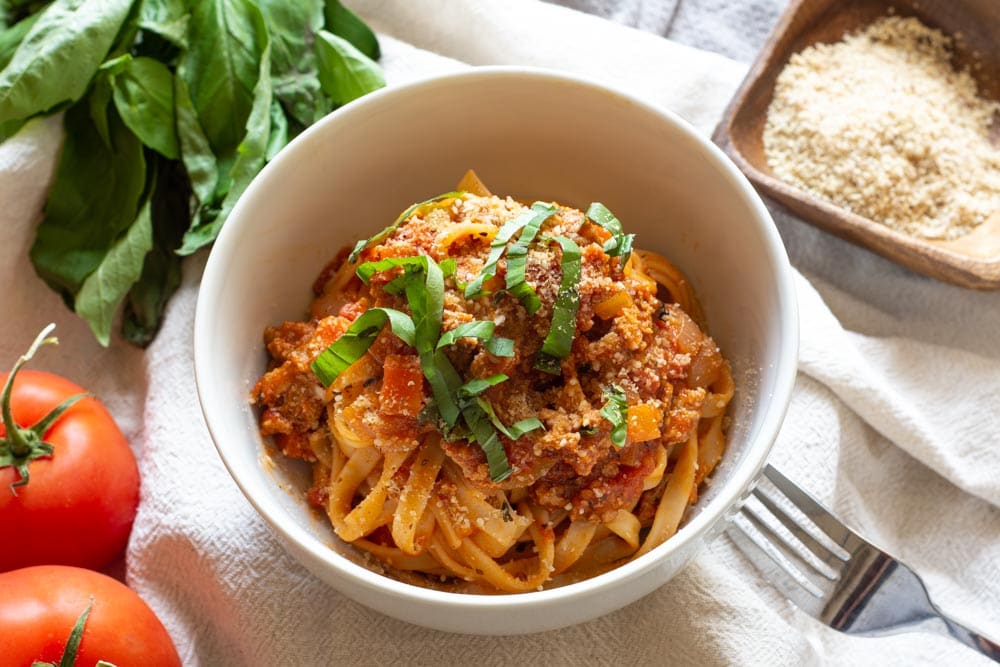 So, in addition the the afore mentioned ingredients I’m also using a few others in this vegan bolognese sauce. First, you might be suspicious of the miso. What the hell is miso doing in an Italian recipe? Well, it’s adding a bit of umami we are missing by not using animal protein. It’s optional and inauthentic, but I recommend it.

As with the miso, I add some nutritional yeast at the end to give the sauce a bit more savory umami. It also gives the sauce some cheesy flavor. Since, bolognese is usually served with some parmesan cheese this totally makes sense.

Finally, I throw in a few dry herbs just to give it a bit more flavor. You don’t have to do this if you want to be a purist, but I like them.

Okay, without further ado here is my recipe for Vegan Bolognese Sauce! 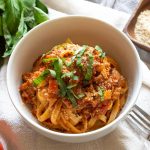 Note: this vegan bolognese sauce freezes excellently. So, if you don't plan to use all of it within a few days, store it in a freezer safe container in the freezer for up to 3 months. Just be sure to freeze it alone (without the cooked pasta). 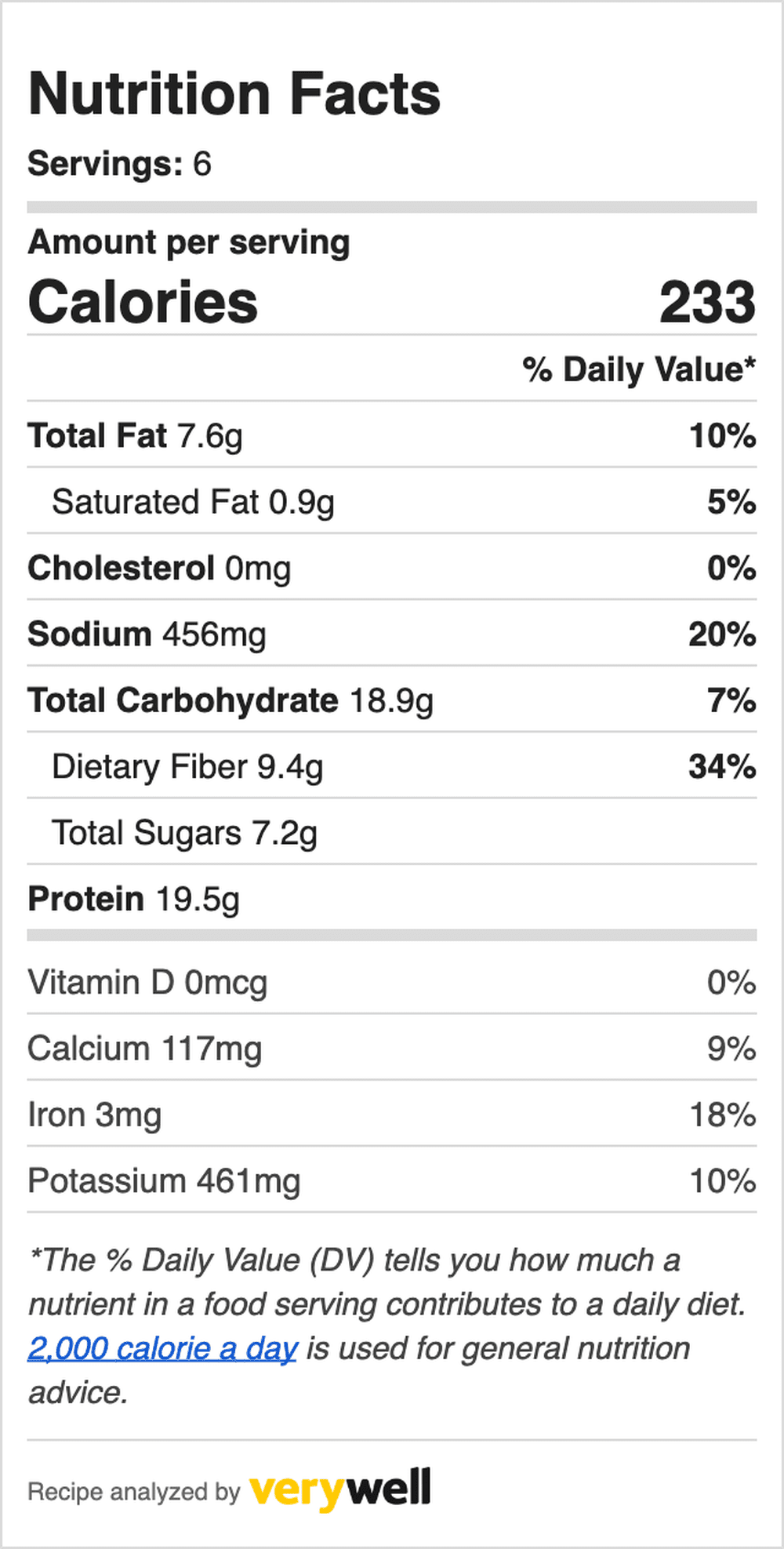 Note:Nutritional Facts for Sauce only