Vegan Berlin? Yes, that’s a pretty accurate description of the city. There are so many options it’s hard to know what the best vegan restaurants in Berlin are. Well…I’m here to help!

Berlin is a city known for its wild nightlife, spectacular vegan food, and “anything goes” attitude. It’s a city where one’s inhibitions can take a back seat to fulfilling hidden fantasies and desires.

So, it’s no surprise that Berlin’s vegan culinary scene is full of fanciful concoctions that, at times, feel like they’re straight out of a decadent dream. It’s even possible for your tastebuds to take you on a long journey down memory lane to a time before you were vegan, because Berlin has some of the best veganized dishes in the world. Nearly anything you an imagine including vegan burgers, vegan sushi, vegan donuts, vegan tacos, and more are there for the taking. All ready to be devoured, cruelty free, of course. Note: I’ve included a few affiliate links in this article in case you want to book accommodations. I receive a small commission for any sales made, without any additional cost to you. Sponsorship Disclaimer: Big thank you to Hotel Almodovar, Santa Cantina, and Vux for hosting us and serving us some of the best vegan food in Berlin. Thank you to Veganz for sending us samples to taste for this article, and thank you to GoEuro for sponsoring us. As always, opinions expressed are completely my own. 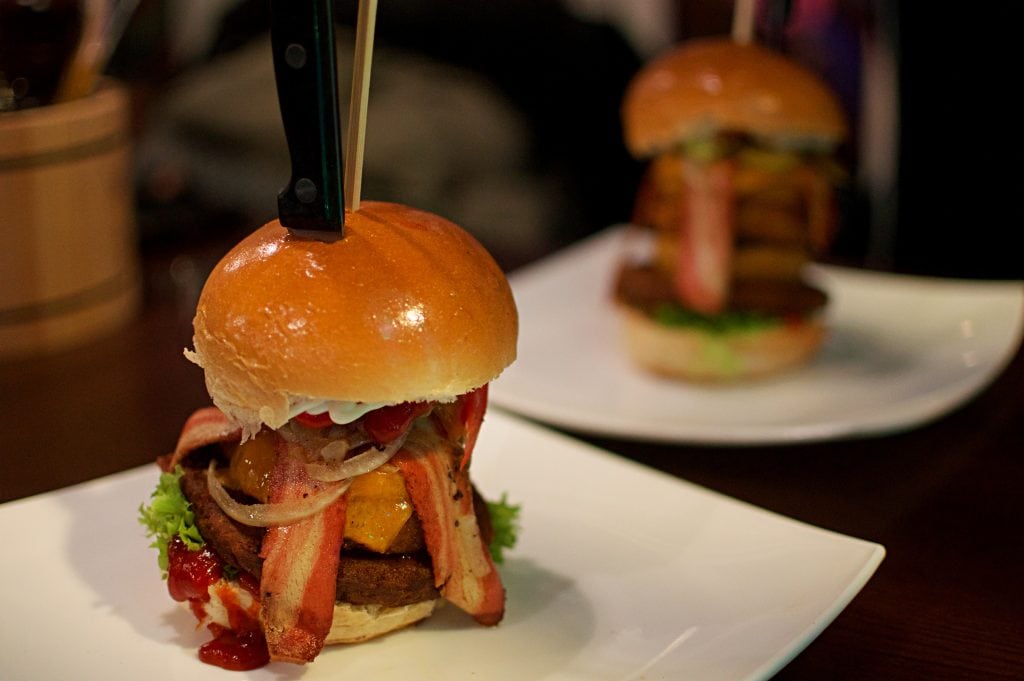 Lily Burger is not a vegan establishment, so it’s shocking just how incredibly imaginative and fantastic their veganized burgers are. You can get their towering meat-free masterpieces stuffed full of a variety of toppings, including vegan cheese, onion rings, bbq sauce, and even vegan bacon. These monster burgers can be on the pricy side, but they’re worth every last cent.

If you have a healthy appetite, love vegan burgers, and want Instagram worthy pics then Lily Burger in Berlin is the place for you to live out all your dirty burger fantasies. This is definitely some of the best vegan food in Berlin. With all the incredible vegan options in Berlin it’s no surprise that vegan sushi is available. There are plenty of options for the typical avocado or cucumber roll, but for something truly special head to Secret Garden Vegan Sushi.

Located in Friedrichshain, right above the Veganz grocery store (see below) and next to an awesome vegan shoe store, this beautiful vegan restaurant is serving absolutely delicious vegan sushi and other Japanese dishes. I’d recommend a selection of the fancy rolls (especially the tempura one), and one or two orders of dumplings to feed the hunger you worked up after shoe shopping. Actually, I recommend you go crazy. Order a lot of different options. The prices are pretty reasonable. Plus, when else do you get to have such creative vegan sushi? 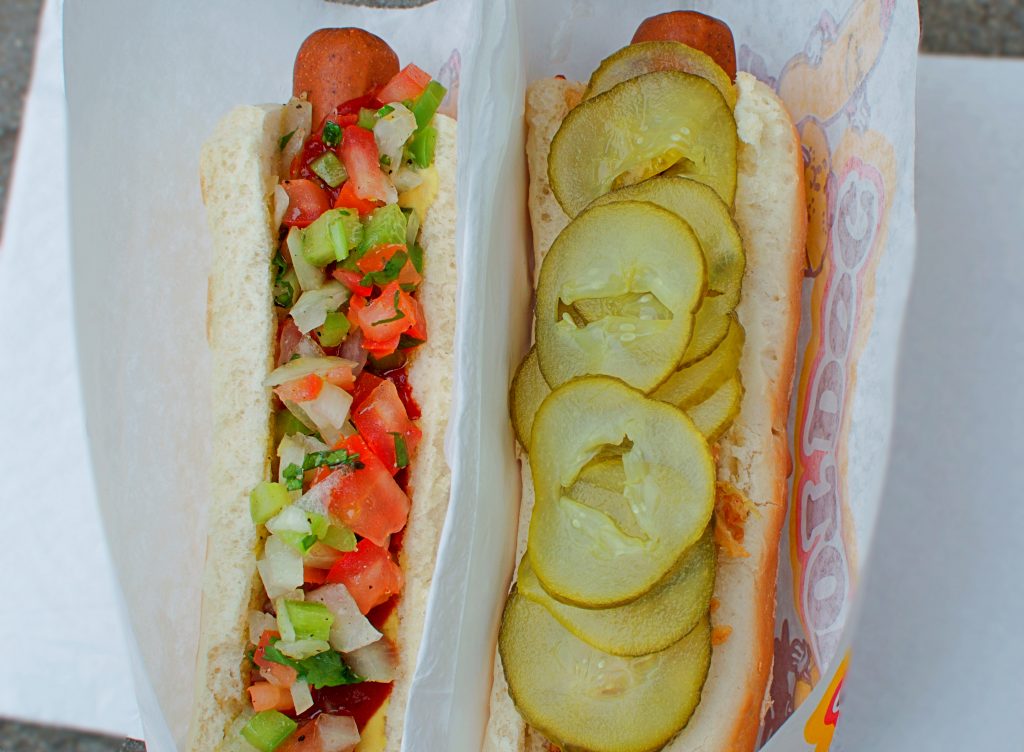 Their simple soy dog are served on a soft fluffy bun, piled high with fresh and tasty ingredients like pickles, onions, sauerkraut, peppers, tomato, and mustard. The menu has several tempting pre-designed hot dogs to choose from, but I couldn’t resist the Red Hot Chili dog both times I went. It was a composition of hot chili pepper sauce, pickles, and onions. Absolutely outstanding, and possibly the best vegan hot dogs in Berlin.

The restaurant also serves soup, hence the name, but really, who cares? The hot dogs are the main star here. 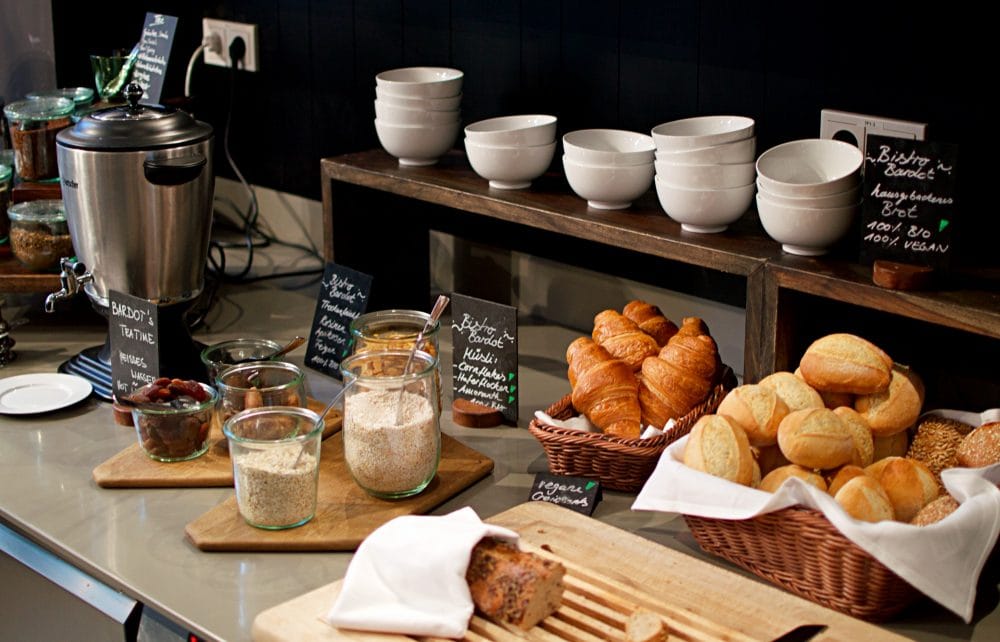 I love brunch, and can you blame me? Breakfast combined with lunch, accompanied by coffee and booze…I can’t think of many things that are better in life.

Hotel Almodovar, a vegetarian bio hotel in Berlin, offers a vegan and vegetarian brunch for guests and the general public. Their vegan selection is the best I’ve seen in my life. Cheese, meats, dips, vegan butter, and even flaky buttery croissant! It’s enough to keep you full for most of the day, and the best reason I can think of to get out of bed in the morning.

So for the best vegan brunch in Berlin, head to Hotel Almodovar. 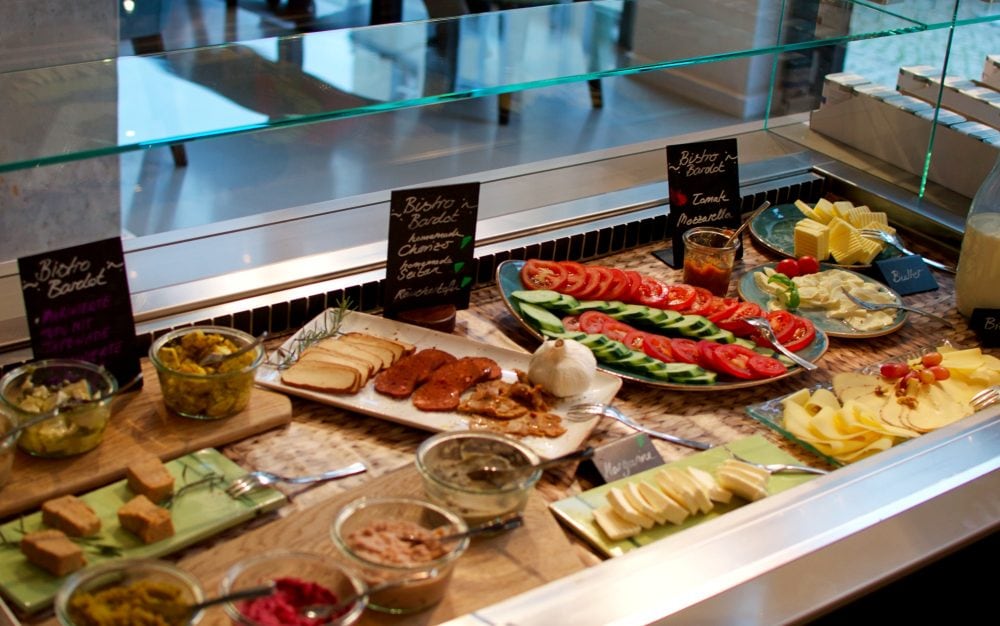 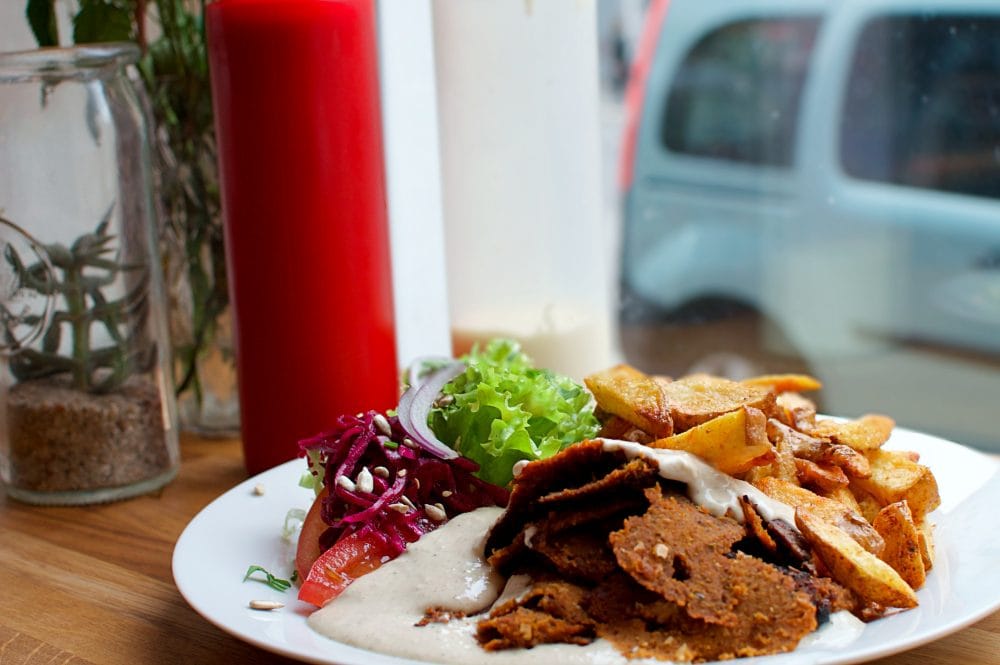 Doner kebab was first brought to Berlin in the 1970s by Turkish workers. Since then, the entire country has embraced this meaty dish. You can’t really walk far without running into a doner shop in Berlin. They’re literally everywhere.

No longer do hungry vegans in Berlin have to settle for falafel. Vöner, which opened in 2006, veganized the Doner kebab thus filling a void that once existed in the city’s vegan fast food/junk food scene.

We opted for the Vöner-Teller, a plate full of thinly sliced, roasted seitan shaved right onto a plate and served with greasy crisp french fries, salad, and garlic sauce. The Voner was so good, I teared up a little after the first bite. Even so, the portions were so big that one plate was enough for both of us to share. 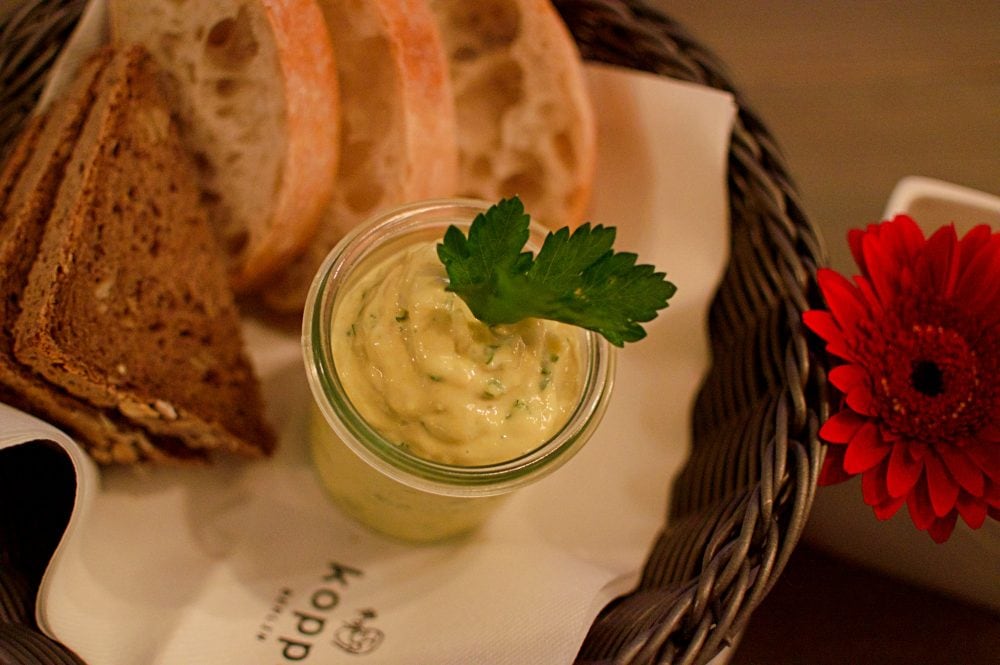 Kopps is probably the most fancy and best vegan restaurant in Berlin. It’s famously known for its beautiful food and fine dining experience.

Unfortunately, a full meal at Kopps is out of my budget, but the restaurant has two veganized dishes I knew I had to try – the cheese plate and the egg salad. Lucky for me neither are a main course.

Honestly, the cheese plate was a bit underwhelming. It was fine, but nothing to write home about. On the other hand, the egg salad was superb. This mayo and chickpea concoction came in a mason jar served with freshly baked bread. It tasted incredibly similar to the “real” thing and was well worth the trip to Kopps alone. 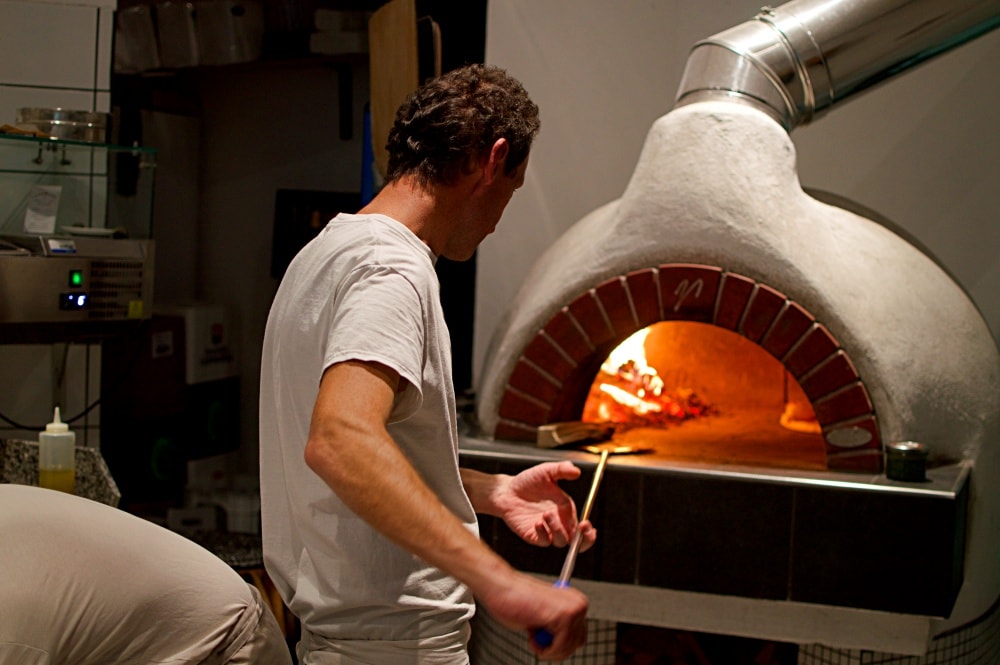 Eight years in New York changed me in a lot of ways. Most importantly it altered the way I thought about pizza. My first apartment, on the Upper East Side, was half a block from one of the best brick oven pizza places in the city, so let’s just say my standards are high. 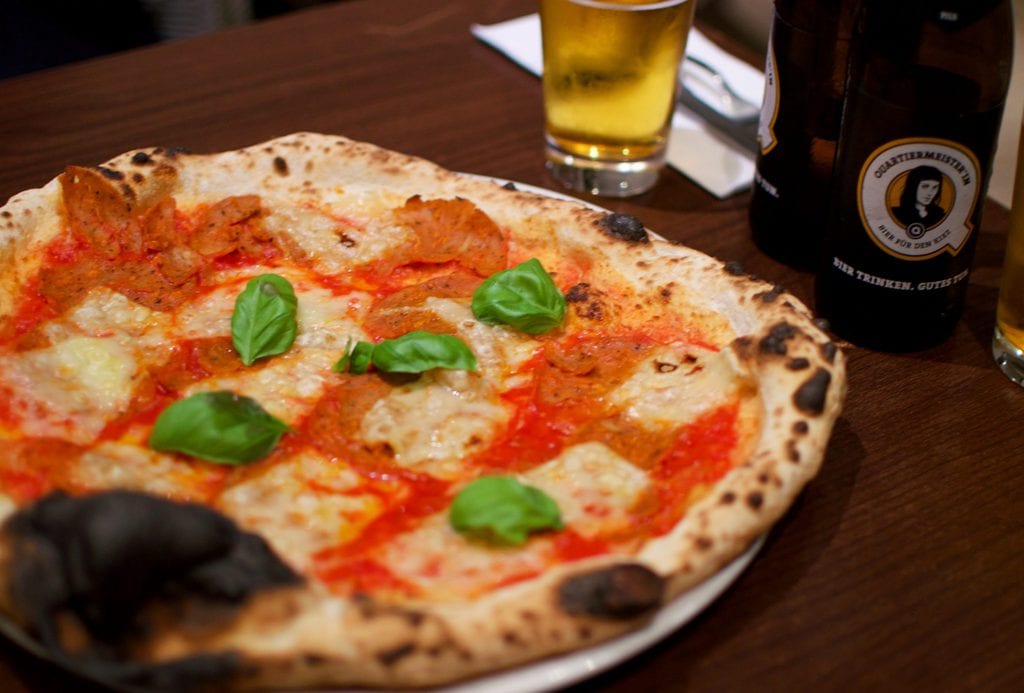 La Stella Nera in Berlin serves one of the best vegan pizzas I’ve had outside of NYC.

The heavenly pie was delivered to our table piping hot, straight out of the brick oven. The crust was exactly how I like it – thin, chewy, crispy and slightly charred. The molten vegan cheese was the perfect partner to the thin slices of peppery oily vegan sausage. It was a delightful experience.

So, if you’re seeking the perfect vegan pizza in Berlin, head to La Stella Nera now!

Momos are fluffy, crispy, little pockets of heaven. It’s perfectly acceptable to eat these South Asian dumplings by the dozen, and the best place in Berlin to do so is at the aptly named Momos.

Four of the six options on their menu are vegan and all of their sauces are vegan. I highly recommend getting the pan fried version and choosing as many as you can possibly stuff yourself with.

The Best Vegan Desserts in Berlin 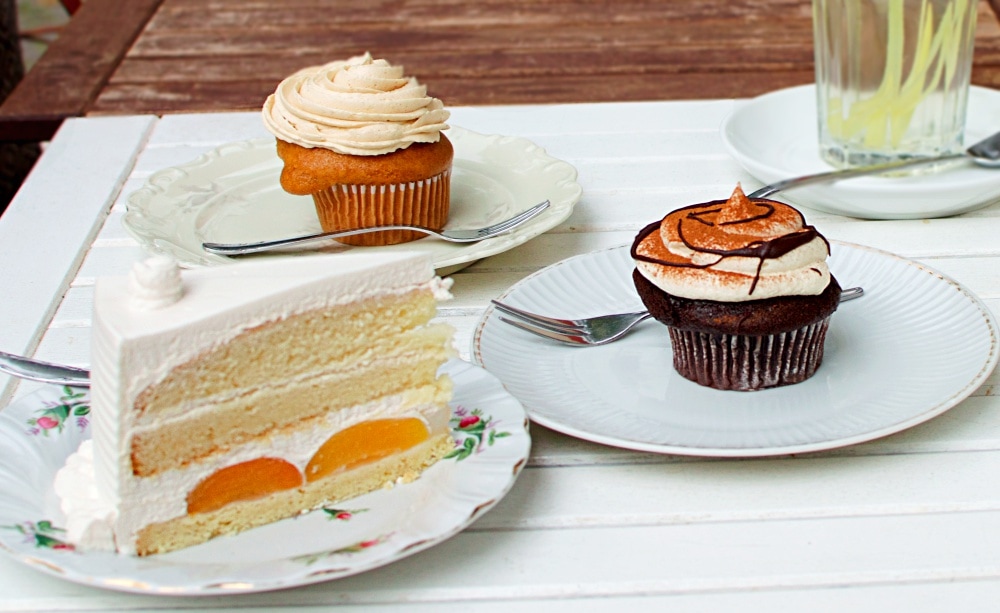 See that cupcake in the back? That’s the best cupcake I’ve ever ever had in my life, and it’s vegan!

Cafe Vux is a sweet little vegan cafe in Berlin with a daily variety of outstanding desserts. I really don’t think there is a bad choice to be made, but if you do go and they have the peanut butter cupcake, get that one. The other desserts I had that day (an apricot vanilla cake and the cinnamon chocolate cupcake) were stellar, but the peanut butter cupcake is the stuff of dreams.

Vux also has, from what I’ve heard, an outstanding vegan brunch on Sundays. Unfortunately, my bus arrived in Berlin late and I didn’t get there before it ended. Sad but an excellent reason to go back!

If you’ve got a sweet tooth, and are looking for the best vegan cupcakes in Berlin get to Cafe Vux. To say that I’m a fan of donuts is a massive understatement. In fact, on my last trip to New York, I made it my sole mission to discover the best vegan donuts in the city.

Visiting Brammibals in Berlin was a bit like what I assume visiting the Vatican would be to a devout Catholic. Anticipation and excitement filled my body on bike ride over and became almost uncontrollable at the first glance of all the doughy gems.

My choice? The coconut bacon maple donut of course. It was everything a good donut should be. Fluffy interior, crispy exterior, and crystalized sugar glaze. I could have eaten 20 because these are the best vegan donuts in Berlin, and maybe Europe! Fancy a Willy Wonka and the Vegan Chocolate Factory kind of experience? Then head straight to Veganz in Friedrichshain.

This all vegan grocery store has more varieties of vegan chocolate than you can shake a stick at. Bars, balls, wafers, cookies, cakes, it comes in all forms. They also offer vegan chips, drinks, cheeses, meats, produce, and other groceries.

Veganz is a one stop shop for all your vegan grocery needs and it is amazing. They even sent huge boxes of their products to try when I was in Germany. Take a look below.

Looking for the best vegan and vegan-friendly hotel in Berlin to lay your head at night? You’ve come to the right place. 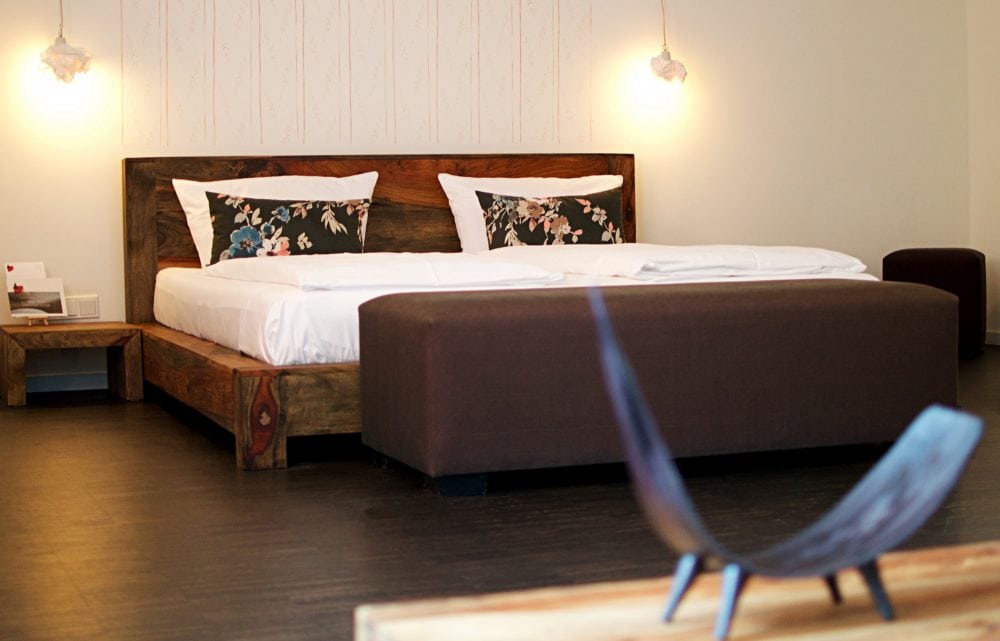 Almodovar Hotel is a vegan and vegetarian hotel in Berlin’s trendy Friedrichshain neighborhood. 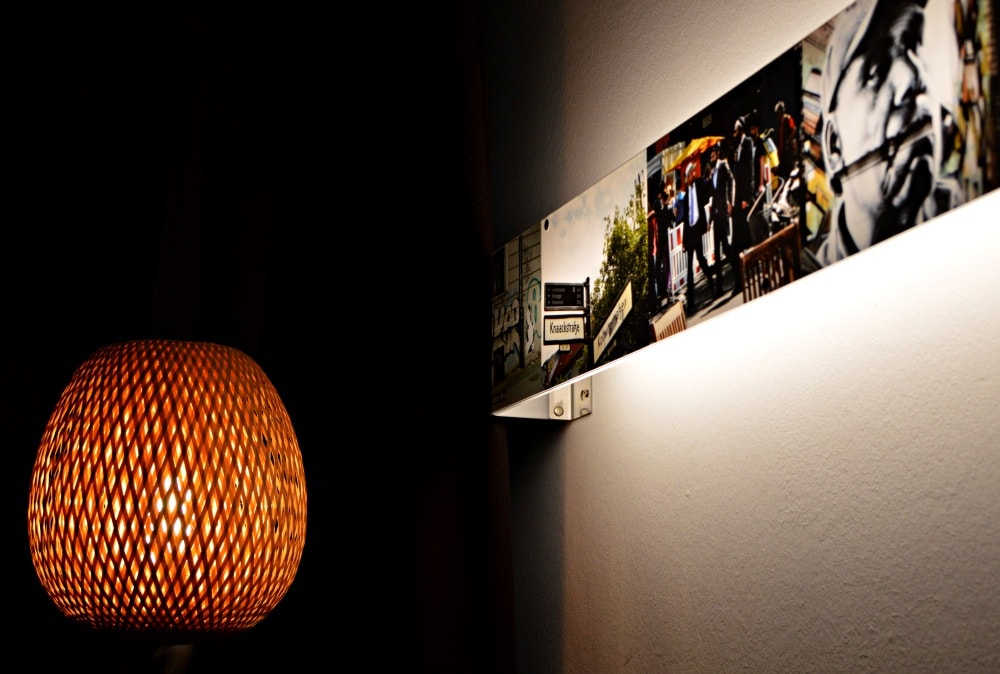 From the moment you step into Almodovar Hotel’s gorgeous lobby you’ll wish you lived here.

Each piece of furniture in the hotel feels like it was custom made and placed with tremendous thought and care. Ample hearty wood is used throughout, and delicate textiles and striking artwork make long lasting impressions.

The hotel places a strong focus on sustainability. They use only renewable energy, use energy efficient lighting sources, and use products made from recycled materials.

They also only cook with organic vegetarian and vegan food, and source ingredients from the region when possible. The hotel has an amazing restaurant, Bistro Bardot, that serves organic vegan and vegetarian breakfast, brunch, lunch, and dinner. More on that above.

It also has a fantastic sauna and spa where we relaxed after two long days touring the city.

Almodovar is a truly special hotel that will make you long for the day you return to Berlin.

Eco-Friendly Travel Around Germany with Omio

Looking for an eco-friendly way to travel around Germany? Look no further than GoEuro. Visit the Omio site for the best prices on train tickets throughout Germany. The site is in English, much easier to navigate than the Deutsche Bahn website, and offers the same prices on tickets!

Like This Article? Save this Guide to the Best Vegan Food in Berlin by Pinning It!

hi, next time check the great african-italian vegan brunch at AtayaCaffe in prenzlauerberg wou need a reservation«««««for sure one of the most amazing brunches in berlin

WOW! I have a sudden urge to get my bum over to Berlin! Your pictures alone are enough to win me over. I had heard that Berlin was a vegan's dream but I had no idea it was this good! And vegan hotels - the possibilities are endless! Thank you for sharing!

Do it! You wont be sorry...except maybe if you OD from amazing vegan food :D