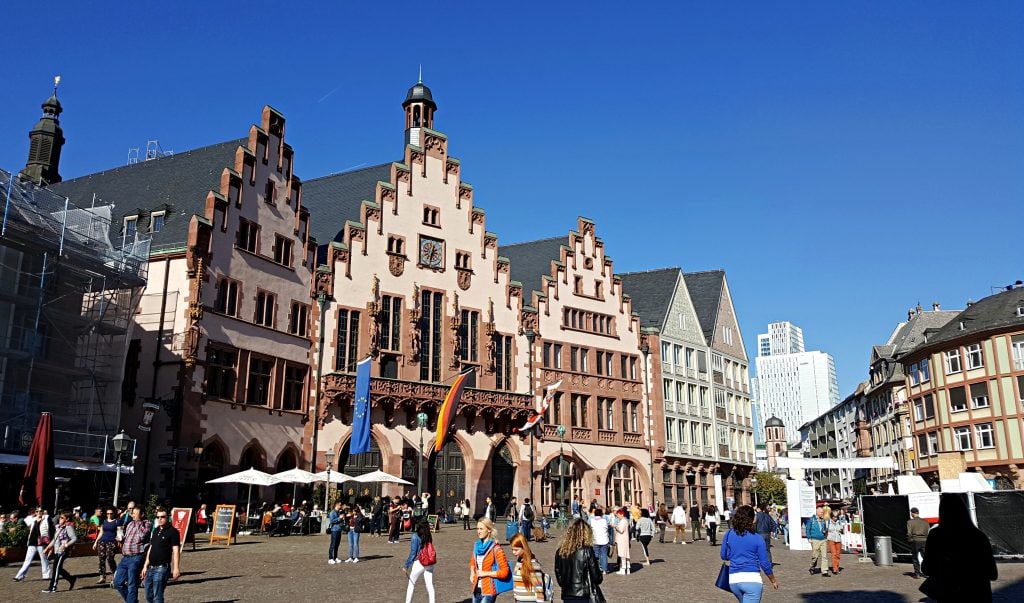 Looking for the best vegan food in Frankfurt? You’ve come to the right place.

Frankfurt is a major financial hub in Germany and headquarters of the European Central Bank. It’s also home to hundreds of brothels (prostitution is legal here), and is where I saw, for the first time in my life, people smoking crack and shooting heroin…in broad daylight.

While exploring the city on foot, one only needs to turn a corner for the entire setting and atmosphere to change. Bleak port-side industrial complexes can quickly transform to quaint townhouse lined blocks within minutes. High-rise buildings pop up after a brief jaunt away from historic squares and buildings, and fancy restaurants and cafes give way to tawdry brothels, sex shops, and kinky theaters in the blink of an eye.

Needless to say Frankfurt is multifaceted and diverse. This realization was totally unexpected prior to visiting, and even more unexpected was the fact that it has a pretty good vegan food scene.

If you’re visiting Frankfurt as a vegan, you will have no problems finding something tasty to eat, but to get you started here is the best vegan food I found in Frankfurt Germany.

The Best Vegan Food in Frankfurt 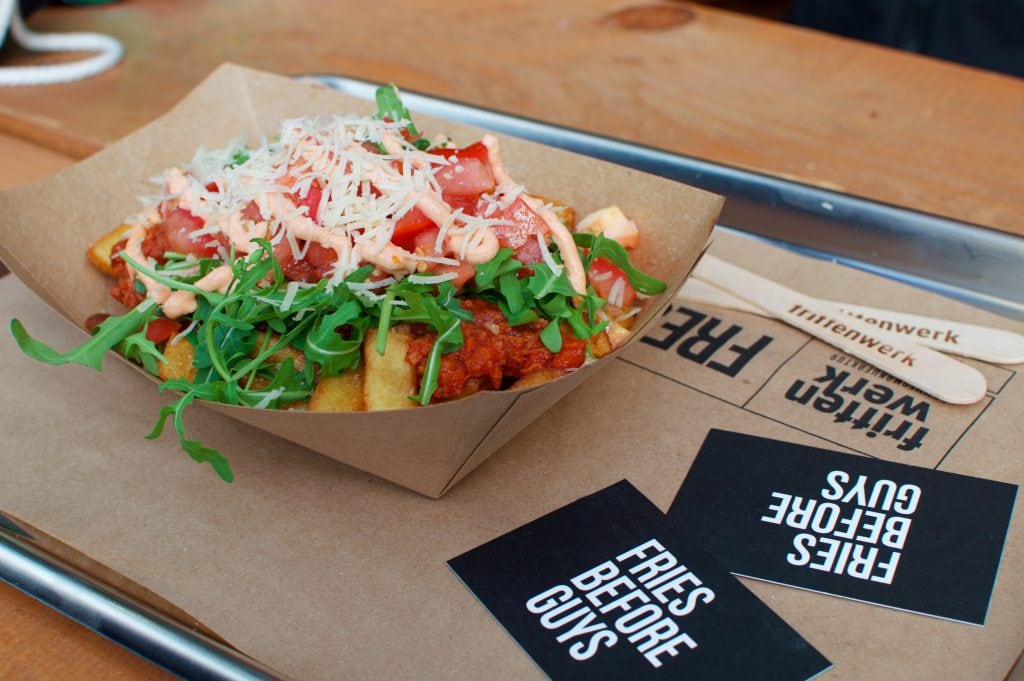 So, here’s a tip. When traveling to a new city social media can be a great resource for tapping into the local vegan food scene. Specifically if you ask people on Twitter or Instagram what their favorite vegan food is in any given location, they typically respond with helpful comment and advice. This is how we discovered one of the best vegan dishes we had in Frankfurt.

Frittenwerk – The Pommesmanufaktur is a non-vegan restaurant, with lots of different french fry based dishes. They offer one vegan option called Bolofritten. It’s a big portion of their thick cut crispy fries topped with vegan bolognese, arugula, diced tomatoes, spicy tomato chili pesto, and finely grated vegan parmesan cheese. IT. IS. OUTSTANDING. and some of the best vegan food in Frankfurt. So much so, that I might actually visit the city again just for these tasty fries. 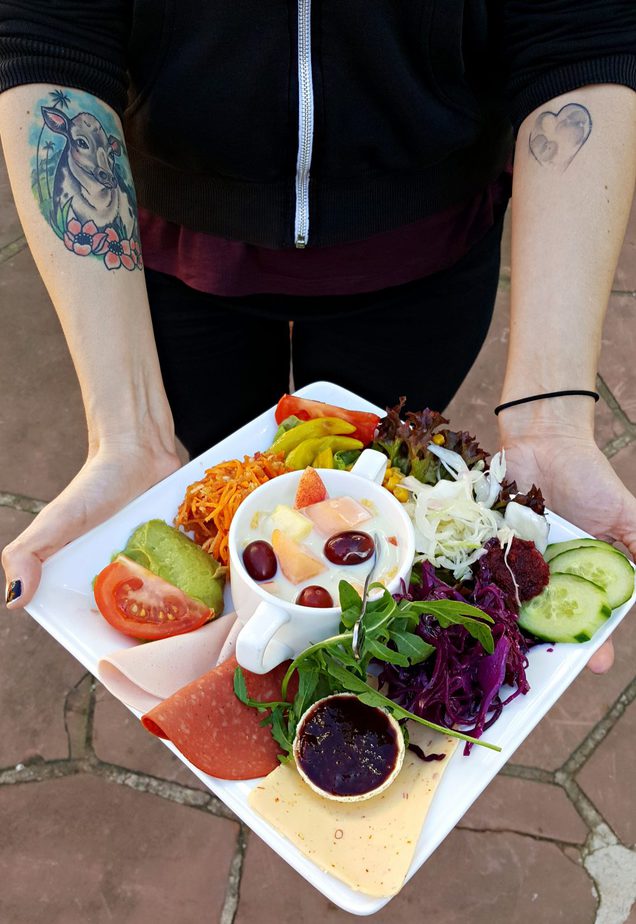 If you’ve been reading my articles lately, you’ve probably noticed how much I love brunch. I think I’ve mentioned it in most of my recent articles. Including this one about vegan Berlin options, and this one on vegan Munich options.

Anyway, Frankfurt doesn’t come up short in the vegan brunch scene. In fact, Metropol Cafe am DOM offers a quintessentially German brunch in a lovely setting. The restaurant is massive, open, airy, and excellent for cold or rainy days. However if it’s warm and sunny, head outside and grab a table in their picturesque garden.

Though it’s hard to top, the food outshines the setting. The variety and sheer amount of food that comes with the vegan brunch plate at Metrpol make this a very special experience. It includes vegan cheese, meats, salads, vegetables, dips, jam, muesli with non-dairy milk and fruit, and a big basket of bread. I can’t think of a better way to start a weekend day in Frankfurt! 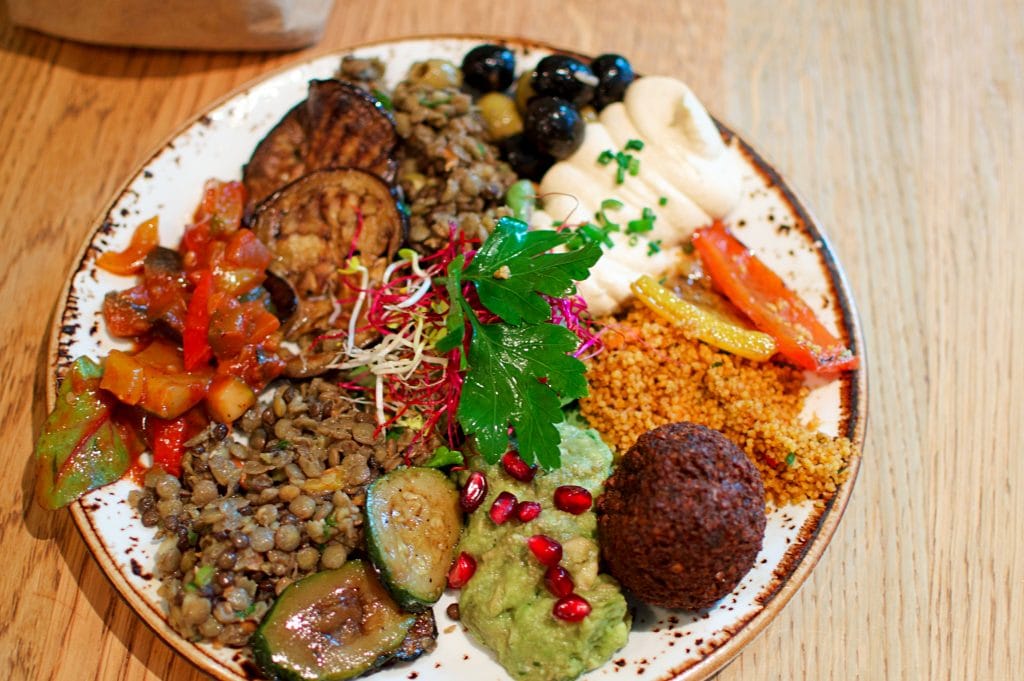 VEVAY is a vegetarian restaurant serving some of the best vegan food in Frankfurt. In fact, most of the Asian and Mediterranean inspired menu consists of vegan dishes. In addition to the food being pretty healthy – lots of veggies, grains, and legumes – it’s also very tasty. Plus, the restaurant itself is quite stunning.

I got the VEVAY dish, which came loaded with lentils, couscous, salas, hummus, guacamole, falafel, olives, and grilled vegetables. It was super satisfying, well seasoned, and delicious. 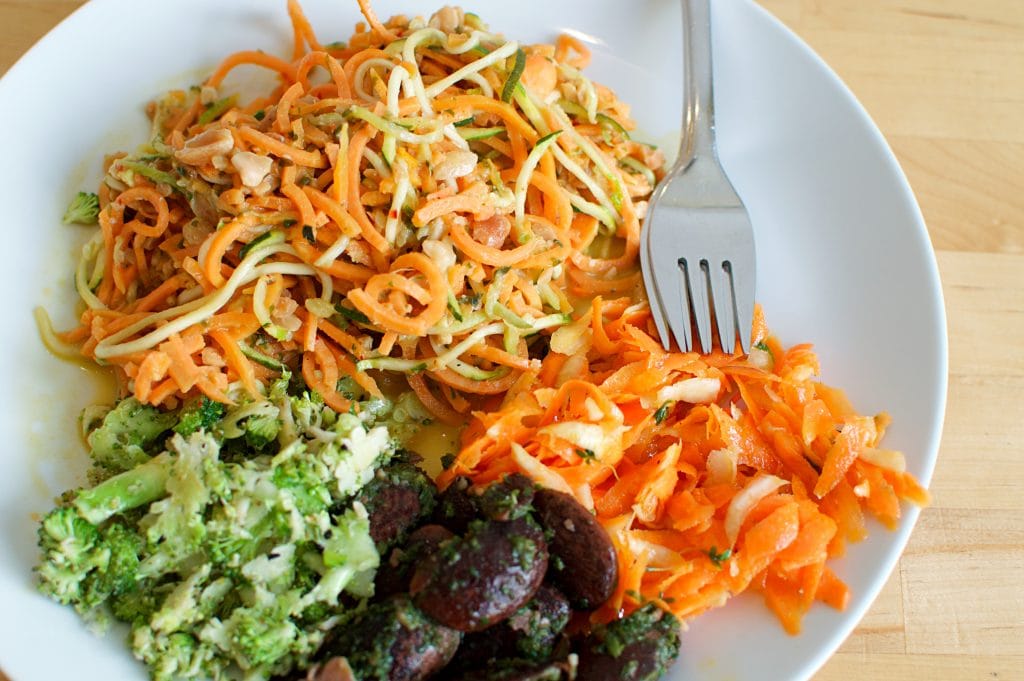 Beet Root is a very casual vegetarian restaurant with a daily menu. The menu consists of two main options, two soups, and a tart. At least one of their main options and one of the soups is vegan every day.

The day I visited they had a peanut vegetable pasta that came with a side of broccoli, beans, and carrots. It was extremely healthy, and not really what is was in the mood for, but I still really liked it.

If you’re in Frankfurt and looking for a healthy vegan lunch consider Beet Root. 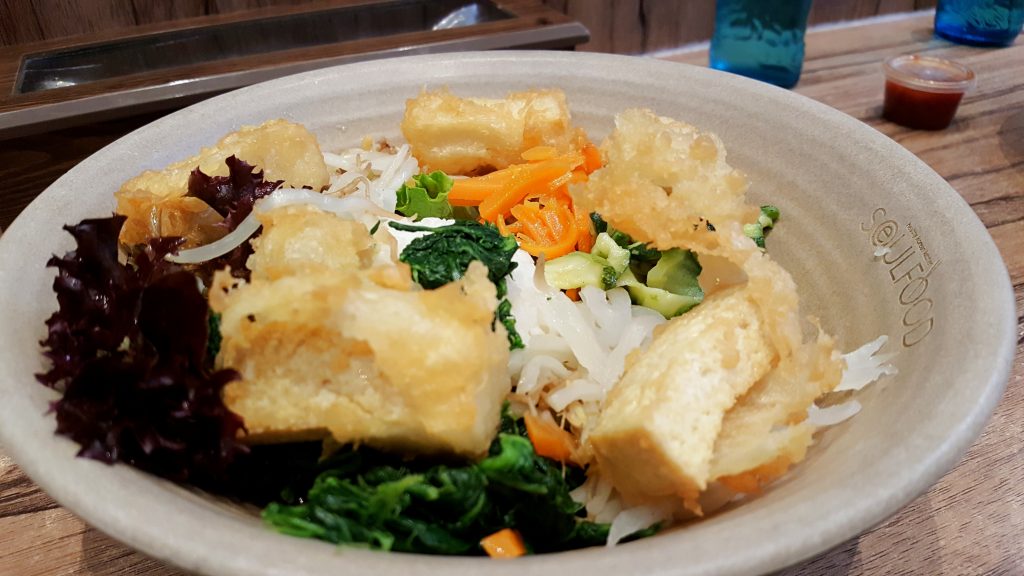 That tofu…it makes the dish.

Seoulfood is a tiny Korean order-at-the-counter style restaurant with a nice range of clearly marked vegan options on the menu.

I had the Bibimbab with tofu, veggies, and the citrus soy sauce. The crispy tofu was heaven. The rest of the dish was a bit lacking in flavor and seasoning. Perhaps I didn’t choose wisely when it came to the selection of sauces. Next time I’ll try a different one, and maybe even add some extra soy sauce. 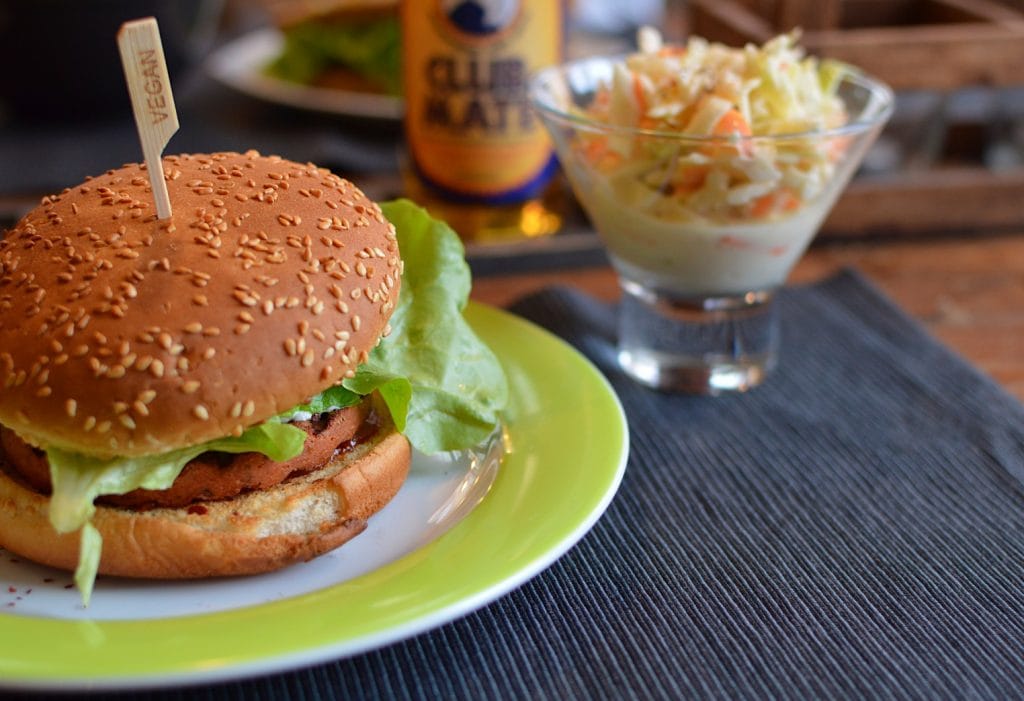 Savory is a nice little cozy vegan restaurant tucked away in a residential area of Frankfurt. They serve up solid hamburgers, hotdogs, “fish” sandwiches, salads, and desserts.

I had the vegan cheeseburger with coleslaw after a long travel day and it really hit the spot. The burger was simple but flavorful, and the coleslaw was outstanding – crunchy, tangy, and totally refreshing. I also had their yummy Oreo cupcake, because who could ever pass one of those up? 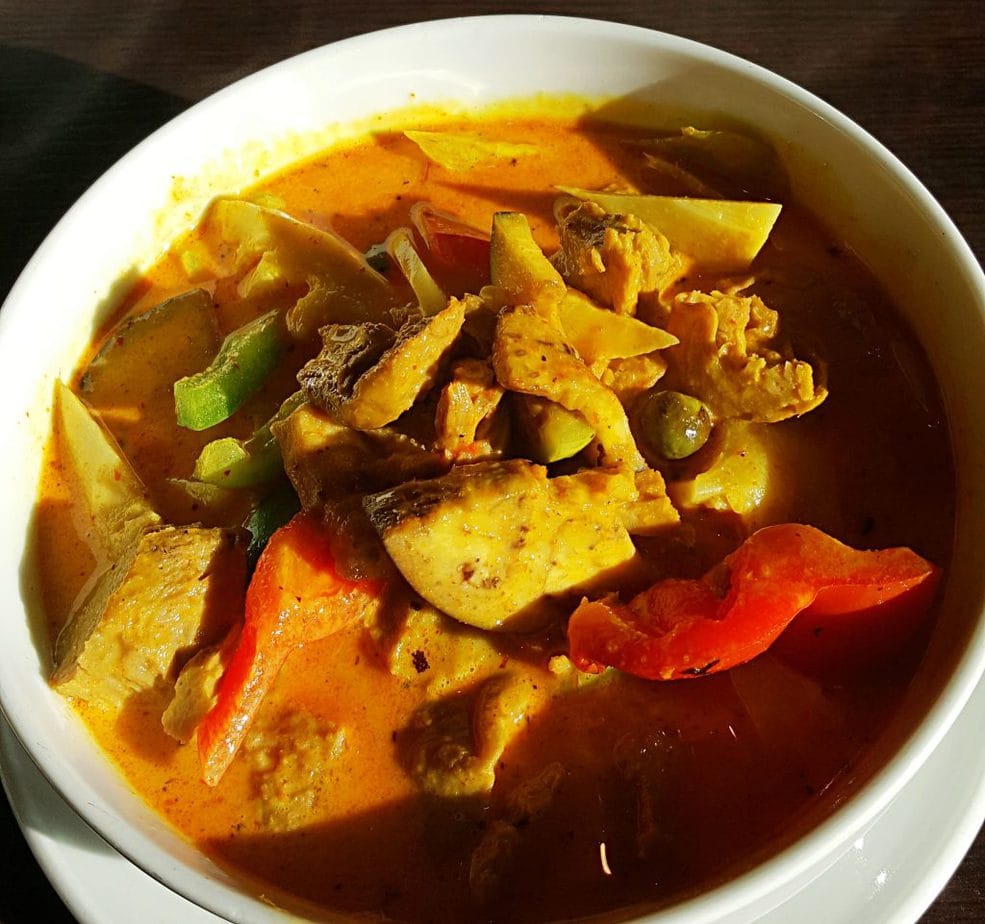 I’m really disappointed that I couldn’t get a better picture than this one at Aroydee, because the food was stellar. In fact, it might be the best Thai food I’ve had since I left Thailand, and some of the best vegan food in Frankfurt.

The restaurant was hectic and loud, tables were crammed into the awkwardly shaped dining room, and patrons (who were mostly Asian) were sitting elbow to elbow. Needless to say it felt pretty authentic from the start.

I ordered the mock duck curry (one of several vegan options), and for lack of a better term, it was fan-fucking-tastic. In fact, the mock duck was scarily close to the real deal, and even had “duck skin”. Once I got past the initial creepiness of the “skin” the curry didn’t have a chance of surviving to see another day.

If you want an authentic Thai Vegan meal in Frankfurt, I highly recommend Aroydee.

Where to Stay in Frankfurt 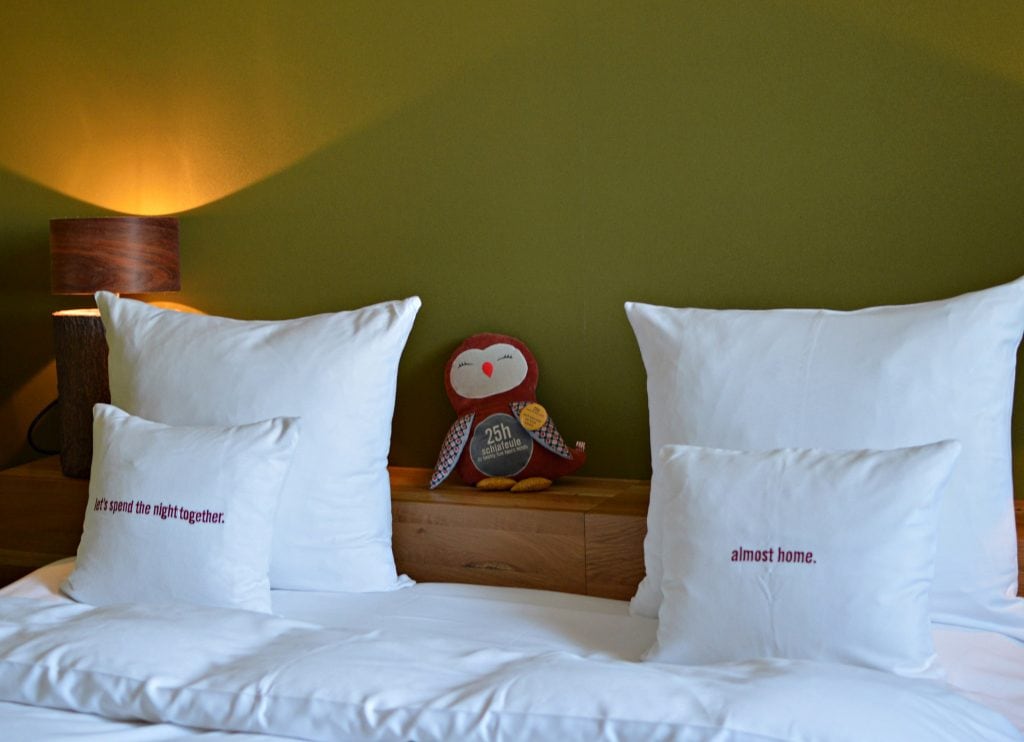 I loved staying at the 25hours Hotel The Goldman. Everything about this hotel is cool, including the LED lit reception desk, the chain-meal curtain in the lounge, the music, the hallway wallpaper, the brightly colored wheel-dial telephone in the room, and the cuddly and adorable owl stuffed animal on the bed. 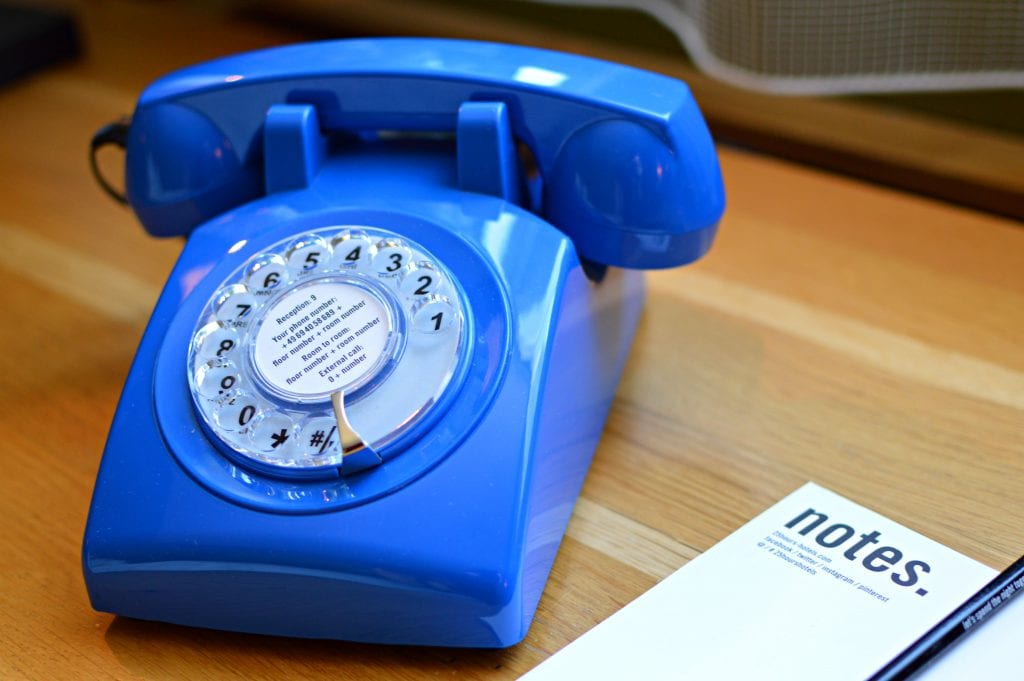 The 25hours Hotel Frankfurt The Goldman is tucked away in a quiet neighborhood away from the tourist area of the city, yet still walking distance to all the main sites. If your’e not in the mood to walk or in a hurry, there’s public transportation nearby making it easy to zip to the center in just a few minutes.

Each of the hotel’s 97 rooms are inspired by stories of Frankfurt and international figures who inspired change around the world. They are decorated in cheery colors, cozy furniture, funky decor, and plush carpeting. They even come with an awesome UE Boom Speaker so you can listen to your favorite music during your stay. Additionally, the beds are extremely comfortable, the showers are fantastic, and the breakfast is yummy. There are even plenty of options for vegans like peanut butter, bread, veggies, and fruit. 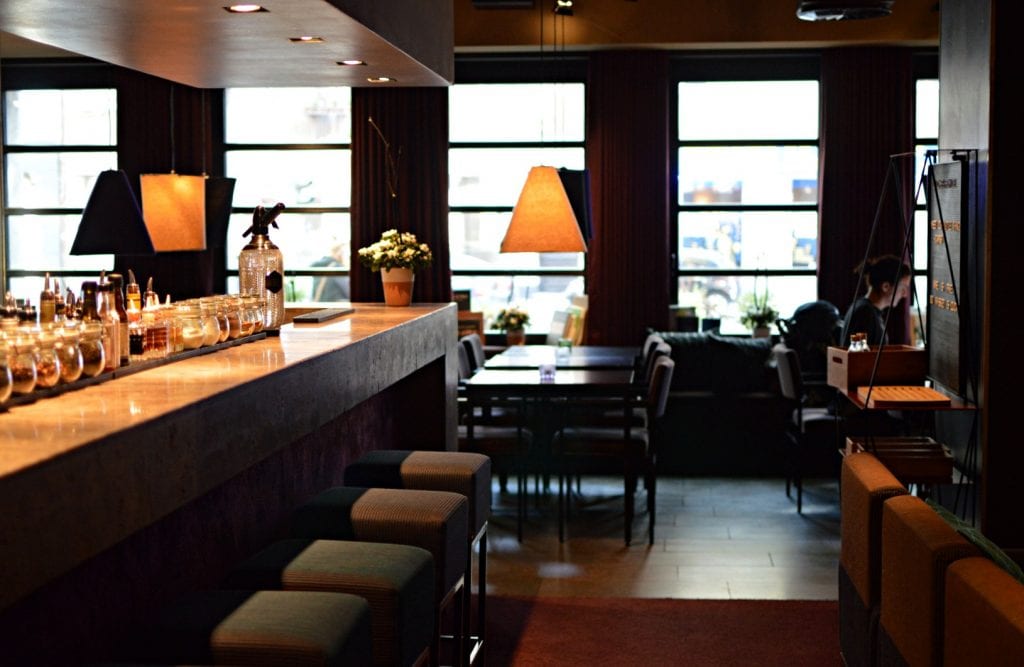 The hotel also has a sauna and meeting space if you need to blow off steam or take care of business during your stay.

I honestly did not want to leave when it was time to check-out. Don’t take my word for it though, have a closer look by viewing the video below and book your stay today!

What do you think? Did I miss something? If so, let me know what your choice is for the best vegan food in Frankfurt in the comments below.

Like This Article About the Best Vegan Food in Frankfurt? Pin It!

Sponsorship Disclaimer: Big thank you to 25hours Hotel Frankfurt The Goldman for hosting me during my stay in Frankfurt. As always, opinions expressed are 100% genuine.