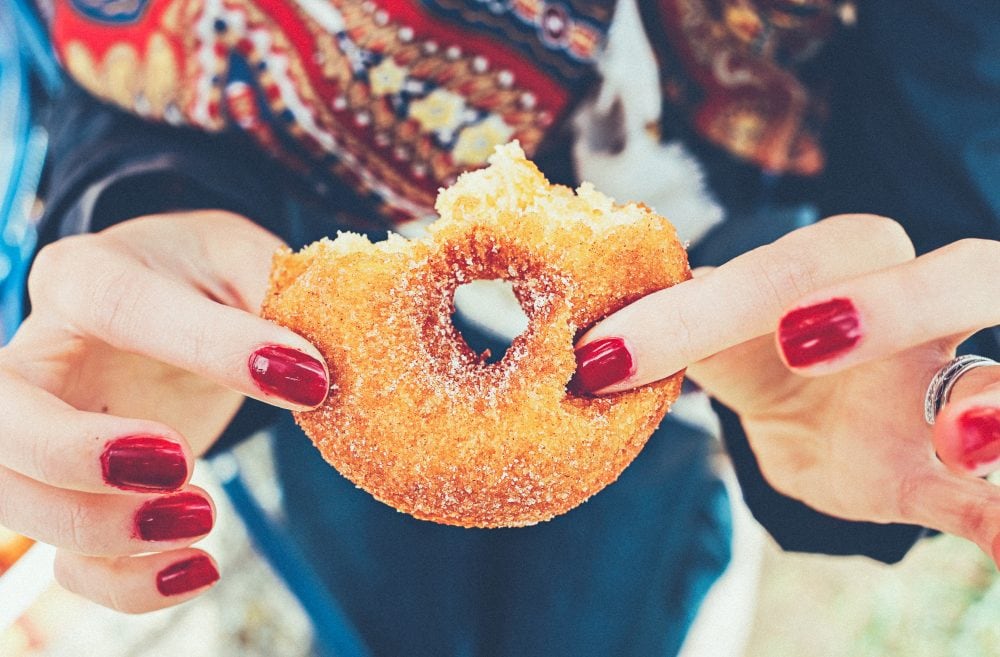 When I was a kid, the only reason I looked forward to going to church was the promise of doughnuts at Sunday School (I grew up Southern Baptist). When I lived in Brooklyn, and before I became vegan, I frequently made the 40+ minute subway ride to Greenpoint to sit at the counter of the Peter Pan Donut & Pastry Shop and feast on their fried, sugar-laden treats while watching their Polish employees take the piss out of one another. When I lived in London, I brought doughnuts to my co-workers for breakfast on National Doughnut Day…which they enjoyed but thought was strange because doughnuts are not considered breakfast food in the UK. Weirdos. I love them so much that if I met a man made of doughnuts I’d lock him in my basement and slowly eat him. It’s a wonder I’m not diabetic.

When I became vegan, my hunt for delicious and cruelty-free doughnuts lasted an entire year. I looked for doughnuts at every vegan restaurant I visited around the world in Central America, Europe, and Asia. I didn’t find a single one. I even attempted to make some this past Christmas. It wasn’t a huge success.

Since leaving NYC to travel, I have admired two shops, Dun-well Doughnuts and the Cinnamon Snail, from afar on social media. They posted picture after glorious picture of their vegan doughnuts all year long. As I drooled and fawned over them, I wondered which shop makes the best vegan doughnuts in NYC?

Both of their doughnuts looked downright delightful but very, very different. Dun-well’s doughnuts looked more like that of a classic American doughnut shop variety with a multitude of inventive toppings. Cinnamon Snail’s look like a hardened doughnut-addict had been locked in a room full of toppings and told to have their way with the naked pastries.

At one point I had to un-follow both of their accounts out of pure frustration. I was spending too much time and energy thinking about them. Even so, the question remained in the back of my thoughts. Which was the better doughnut?

A few weeks ago, I headed back to NYC. As I boarded the plane to JFK I vowed not to leave the Big Apple until I got my fix, and determine who made the best vegan doughnuts in New York City. 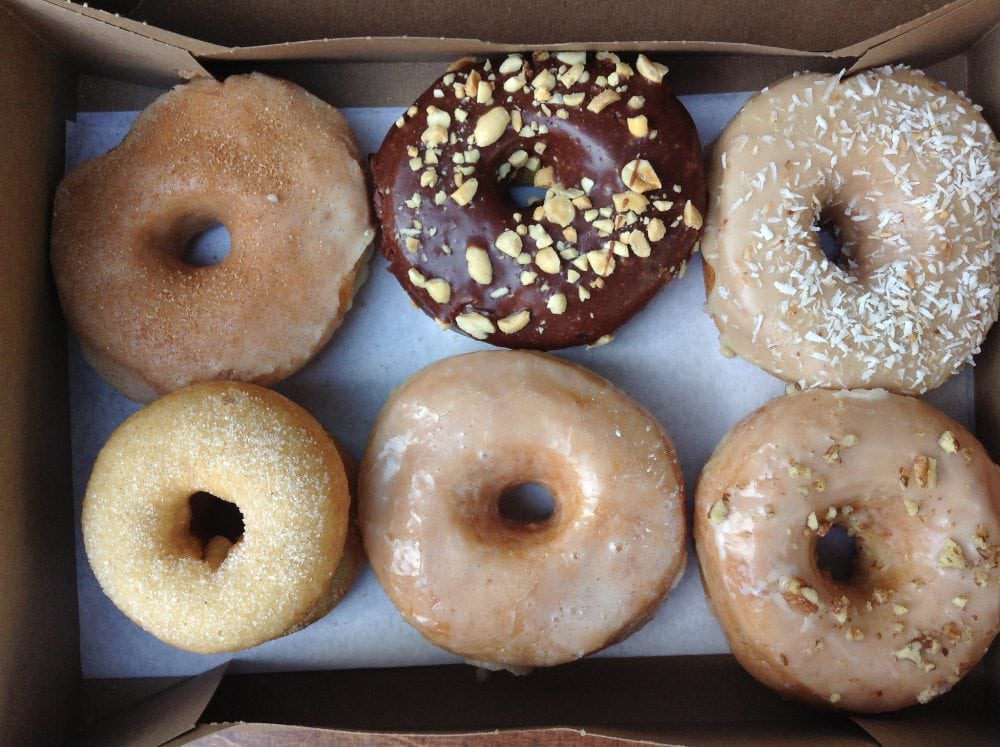 How do I choose just one? I remember thinking that as I stood in line at Dun-well. I was mesmerized by the doughnut case. Before me lay over 15 different vegan donuts. Each called my name. When it was my turn, I ordered a variety to go. I left the shop and felt like I’d just found the pot of gold at the end of a rainbow…minus the annoying leprechaun that would have surely stolen my doughnuts.

Not long after I left…okay, as the door closed behind me, I brought the first one to my lips. Chocolate peanut. It was everything I had hoped it would be and well worth the year-long wait. The dough was perfection. Light and airy, chewy, slightly sweet, and crisp around the edges. The thin layer of chocolate ganache perfectly coated the luscious pastry, and the crushed peanuts gave it a textural integrity that put it over the top on the deliciousness scale. Even their sweet, albeit unassuming, plain glaze doughnut was heavenly. 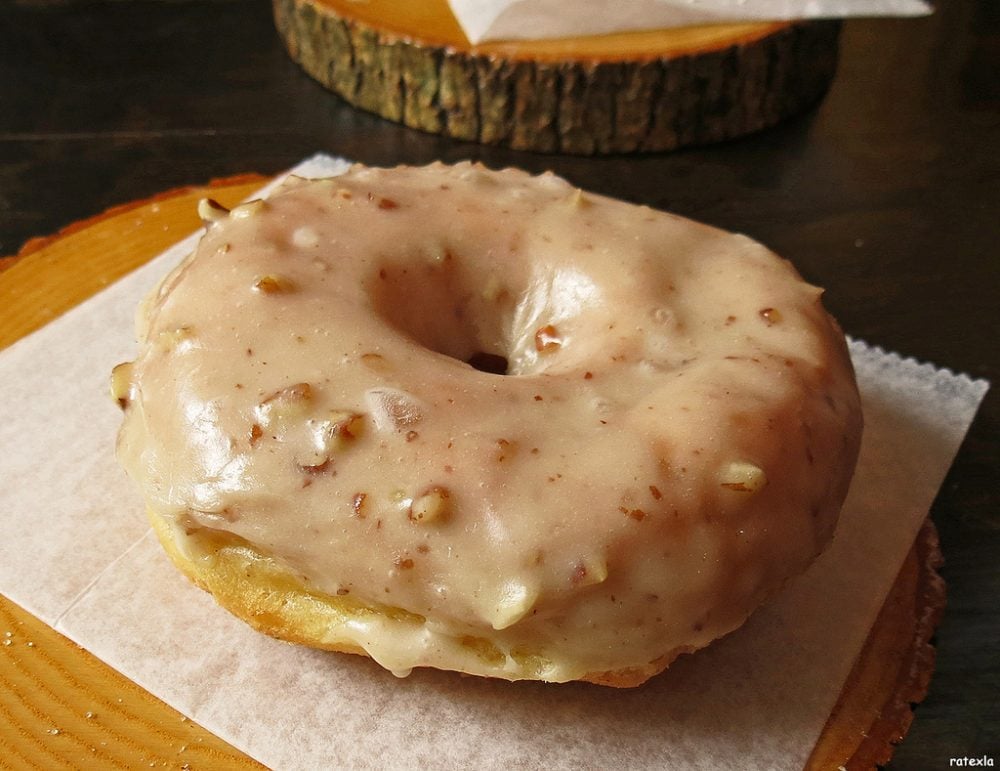 The doughnuts at Dun-well are sophisticated, beautifully presented, and remarkably subtle. Every bite is pure bliss and they’re so light that you can eat two or three and not have any feelings of regret or guilt afterwards. 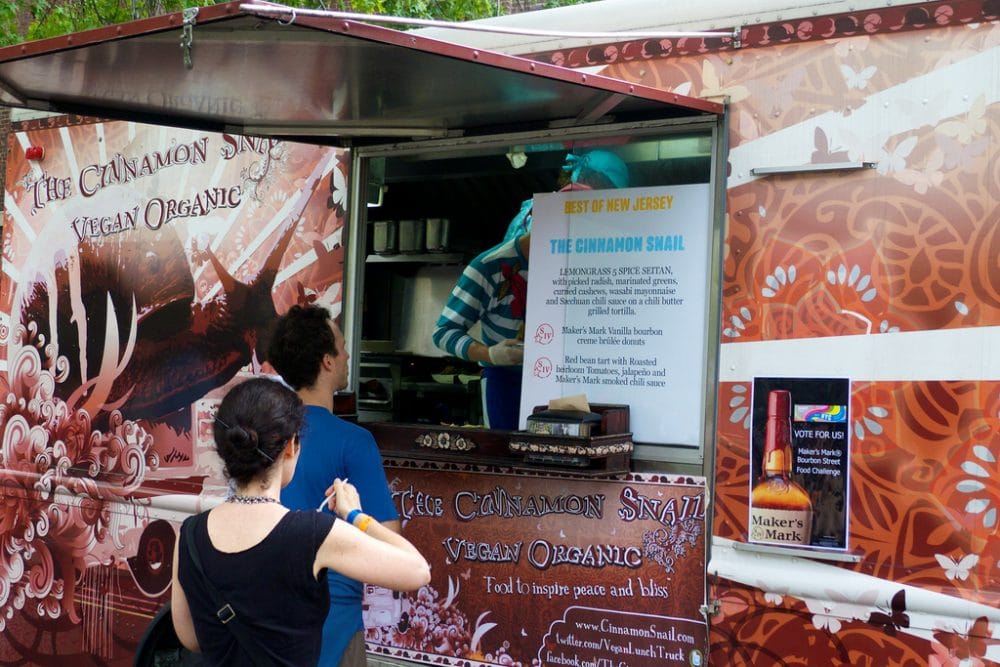 One morning several boxes of doughnuts from The Cinnamon Snail appeared on the dining room table. My ex-roommate, who I was staying with, had kindly brought me a sampling of vegan doughnuts. I felt like a kid on Christmas morning. As I opened each box, I was filled with glee and giddiness. I knew I would soon discover all of their precious secrets (and slip into a deep, deep sugar coma), and this filled me with joy.

Chocolate, toasted coconut, strawberry, pastry cream, hazelnut-chocolate goo. Each doughnut was topped, stuffed, and filled with different delights. I embraced their miraculous existence and didn’t hold back. I indulged and tried pieces of each variety. It was a magical few moments.

Cinnamon Snail’s doughnuts are very different from Dun-wells. They are dense, bold, full-flavored, and unapologetic. One of these bad boys is plenty and will get your blood sugar levels soaring. In fact, they should be sold with a warning label that says, “The contents of this package are highly addictive. Consume at your own risk.”

With a full belly (and a Cinnamon Snail doughnut packed away in my carry-on bag) I left NYC feeling satisfied. I had finally had delicious vegan doughnuts.

As I sat on the plane headed back to Europe the question came back to me. Who makes the best vegan doughnuts in NYC? After pondering over it for a while, I realized it was an impossible question to answer. The doughnuts at Dun-well and Cinnamon Snail are so different, yet both so amazing.

Or maybe one sampling wasn’t enough? Perhaps the next time I’m in New York, I’ll do a “Super Size Me” style doughnut diet for a week and then I’ll be able to decide.

The best vegan doughnuts in NYC are at The Doughnut Project at 10 Morton Street in the West Village. Thank me later.

Oh my goodness, you are killing us with this post! No vegan donuts in Nicaragua. It will make our return to Toronto that much sweeter!

Seriously considering booking a flight to NYC just to try these donuts.