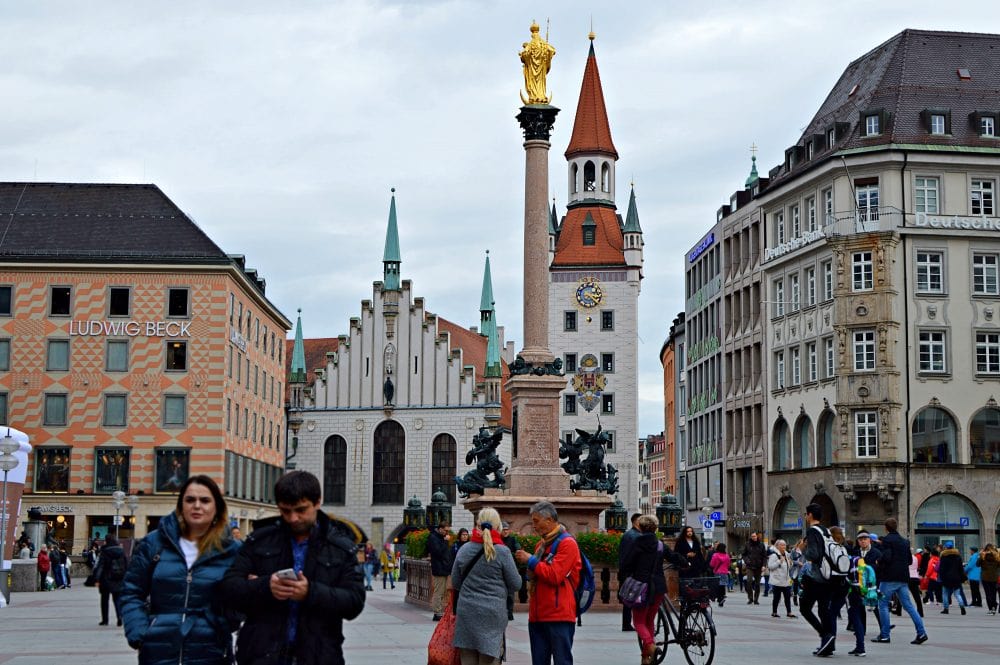 Looking for a Vegan Munich Guide? Look no further!

Visiting Munich as a vegan for the first time was full of fabulous experiences. Experiences like indulging in a vegan fine dining feast, tasting the “better life” in a glorious five star hotel, tucking into traditional Bavarian cuisine in a restaurant named after a German scientist, and even trying on dirndl in a cheesy tourist shop.

Munich has transformed into a vegan-friendly city in the last few years. So, if you haven’t been recently or have never been then it’s time to plan a trip. Additionally, to the fact that there is a lot of incredible vegan food in Munich, the city is also beautiful and vibrant. I promise, you’ll love it and you’ll leave full. 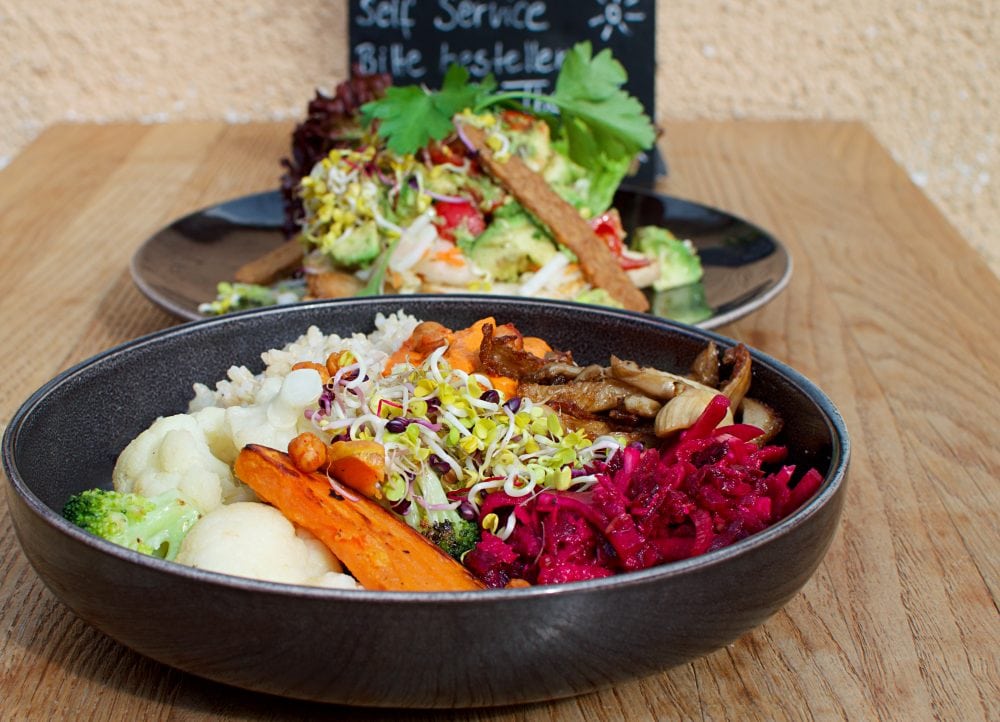 SIGGIS vegan restaurant in Munich is owned and run by one of the most passionate vegans I met while traveling around Germany. Funny enough Sigrid, who the restaurant is named after, doesn’t know the first thing about cooking. A woman on a mission, she didn’t let that little detail stop her from opening a fantastic vegan restaurant. It serves delicious and healthy food and focuses on educating people about veganism.

I sat down with Sigrid and her sweet rescue dogs when I visited SIGGIS. What I experienced was a passionate discussion about veganism. Including the story that led her to become vegan and later open a restaurant.

From the impression I got she won’t like reading about herself. She’s definitely not a spotlight seeker. However, the experience I had meeting her was so unexpected and so moving. I think it’s important to share it with others.

During our brief encounter she managed to move me to tears. She reminded me of the true reasons why I’m vegan. Her honesty and passion is fierce. Though, she’s not the type of person to preach and scream at others about the righteousness of veganism. In fact, her style is much more elegant and in my opinion much more effective.

The Vegan Food at SIGGIS

Sigrid’s story aside, the food at SIGGIS, which is designed by head chef Serkan Tunca, is exceptional. In fact, it was some of the best vegan food in Munich. The focus is on fresh ingredients, and healthy and tasty dishes. You wont’ find any faux meats on the menu here. Rather, lot’s of veggies, fruits, and whole grains are featured. The result is a variety of uber colorful dishes packed full of flavor that will make you feel good all day long.

SIGGIS is a must for anyone looking for healthy and delicious vegan dining while visiting Munich. 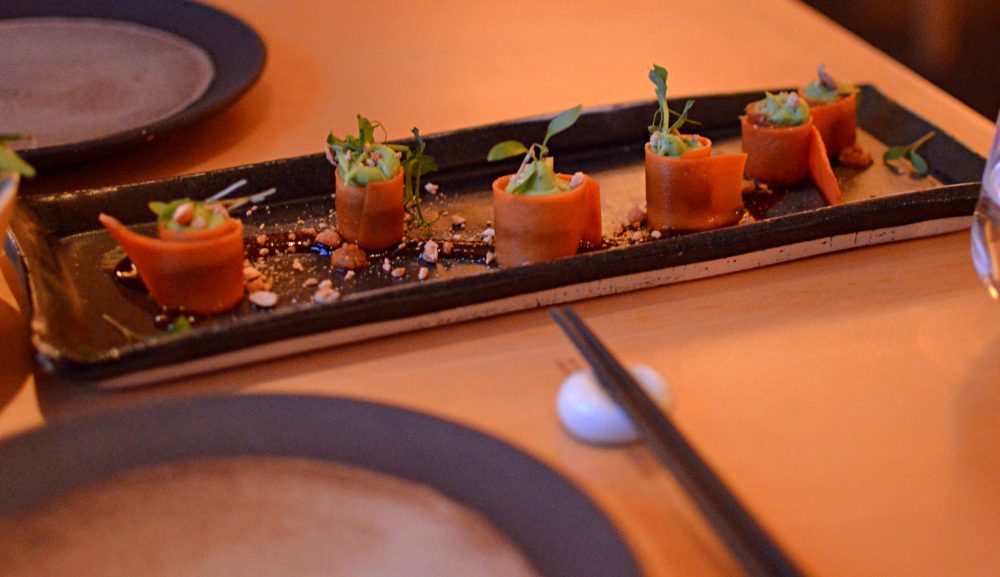 As much as I dislike some of the associations that come along with the word “foodie”, that label probably fits me pretty well. I love junk food, home cooking, street food, and fine dining. I love to cook, even went to culinary school, and get more excited shopping for veggies at the farmers market than I do shopping for shoes.

Indulging in every style of food comes along with certain pleasurable sensations, however, there are none quite like the ones that accompany an expertly crafted meal that includes several beautifully composed courses, and takes place in a stunning setting. A dining experience at EMIKO Restaurant & Bar in Munich has all those things. 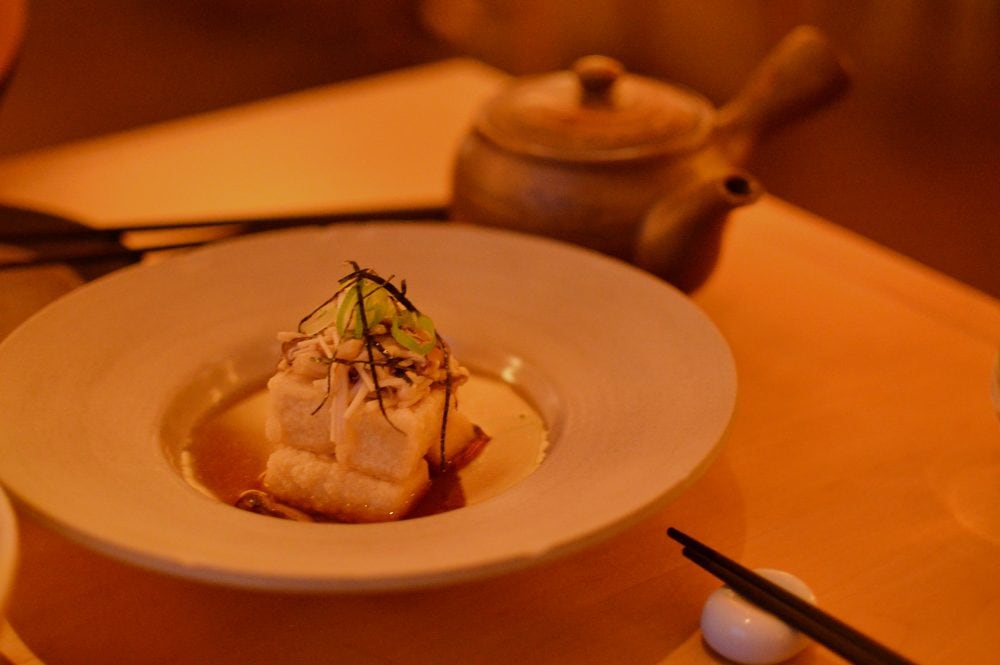 I often hear people say that vegans are asking too much when they expect a “normal” restaurant to cater to their dietary restrictions. In my opinion, if a restaurant’s kitchen staff are flexible and creative enough to come up with outstanding vegan dishes then that a sign of true talent.

Okay I’ve rambled on enough. EMIKO is a fine dining non-vegan Japanese restaurant located in the LOUIS Hotel in Munich. My meal there was nothing short of exceptional and included what is probably the best vegan food in Munich. Every one of the six course was perfection, full of flavor, complimenting textures, and tantalizing tastes.

The highlights were the miso eggplant, and Panko tofu. The eggplant’s crispy exterior was bathed in a sticky sweet and salty glaze and the interior was a creamy explosion of savory flavor. The crispy Panko fried tofu was served hot and crunchy with a delicate sauce poured table side.

If you want to treat yourself to an amazing fine dining experience while in Munich get yourself to EMIKO and order their vegan dishes. You’re guaranteed a magical night. 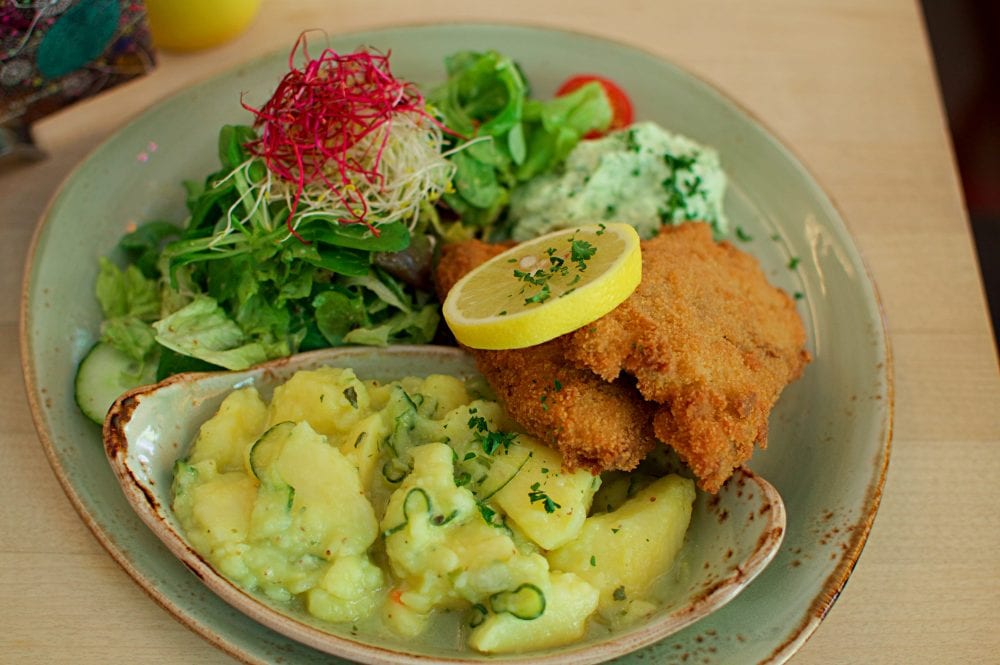 Traveling to Munich as a vegan doesn’t mean you have to miss out on experiencing the flavors of traditional Bavarian cuisine.

Max Pett is a vegan restaurant in Munich offering a wide variety of cuisines, including classic Bavarian dishes. When I visited the schnitzel and potato salad were on offer among several other equally delicious sounding dishes. But when in Rome…I mean Bavaria, one must seize the opportunity to taste local veganized delights.

The dish was glorious. The vegan schnitzel was everything good schnitzel is. “Meaty”, crunchy, golden, fried perfection. The potato salad, a perfect partner, was equally satisfying. 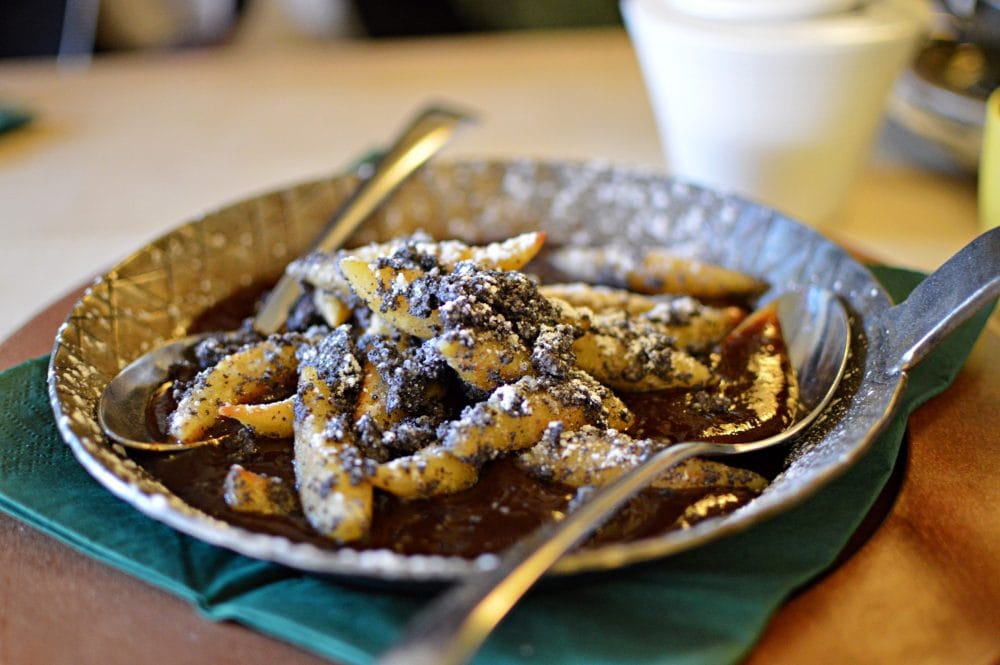 Hard as it might be to save room for dessert at Max Pett (because the portions are massive!), make the effort. The desserts are also superb, including the sweet and crispy Spätzle bathed in plum sauce and topped with blue poppyseed powder and sugar.

If you are seeking a vegan version of a traditional Bavarian dining experience while in Munich, Max Pett is the best place for it! 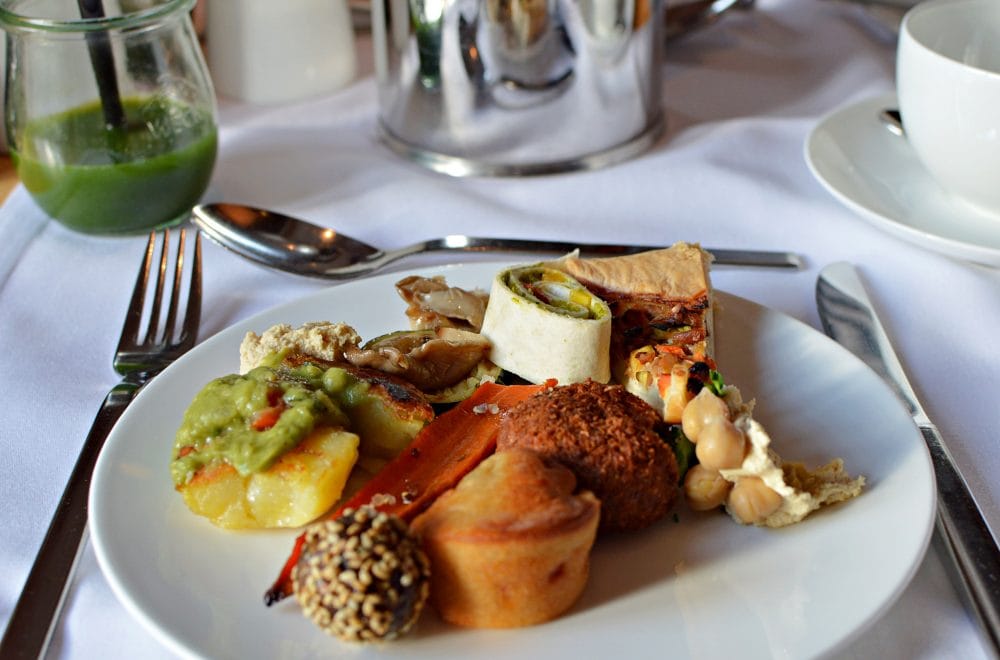 Brunch. The most important meal of the day. Well, at least when you’re traveling, don’t want to get out of bed early, and have a craving for something sweet, something savory, and something caffeinated. 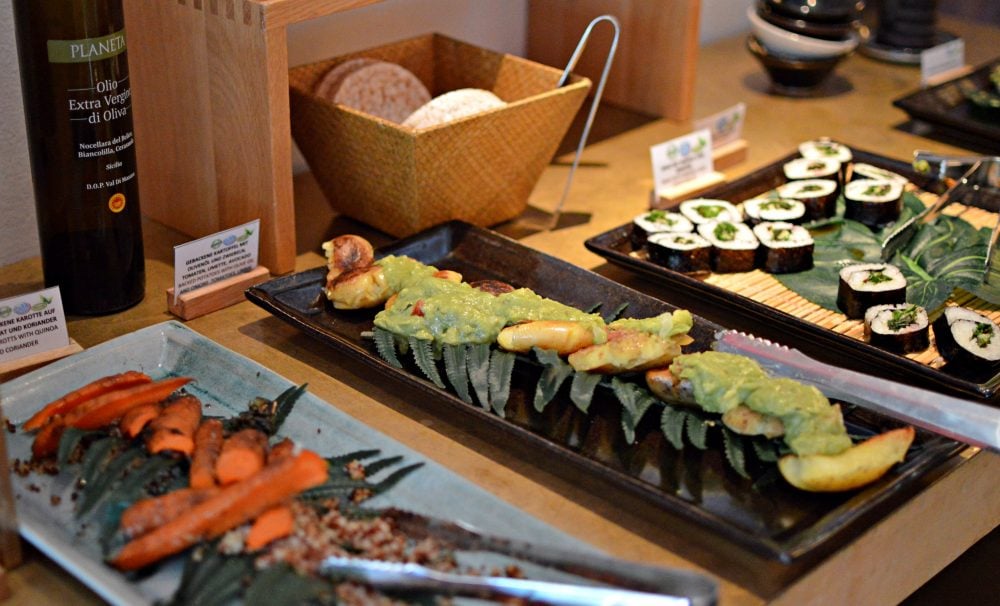 Not staying at LOUIS Hotel? You really should, but no worries, their brunch is open to the public. 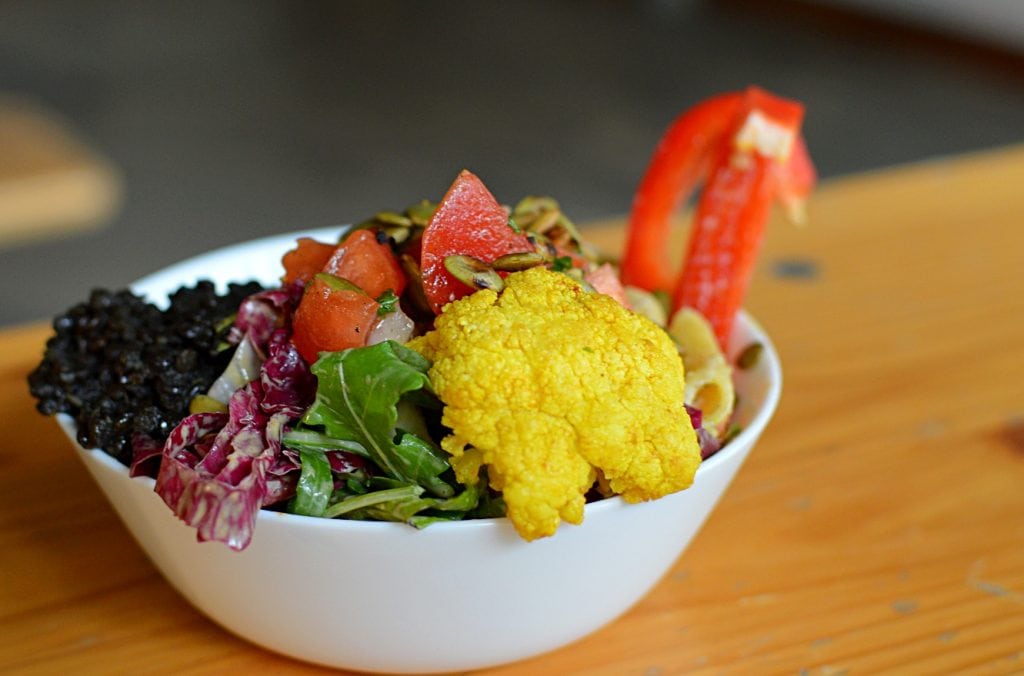 The Buddha Bowl at Rebella Bex in Munich is the main star at this restaurant. And it’s no wonder, since the space doubles as a yoga studio. The dish’s ingredients change daily but when I went it included loads of veggies, pasta, lentils, and seeds. It was a well flavored, and energizing dish. 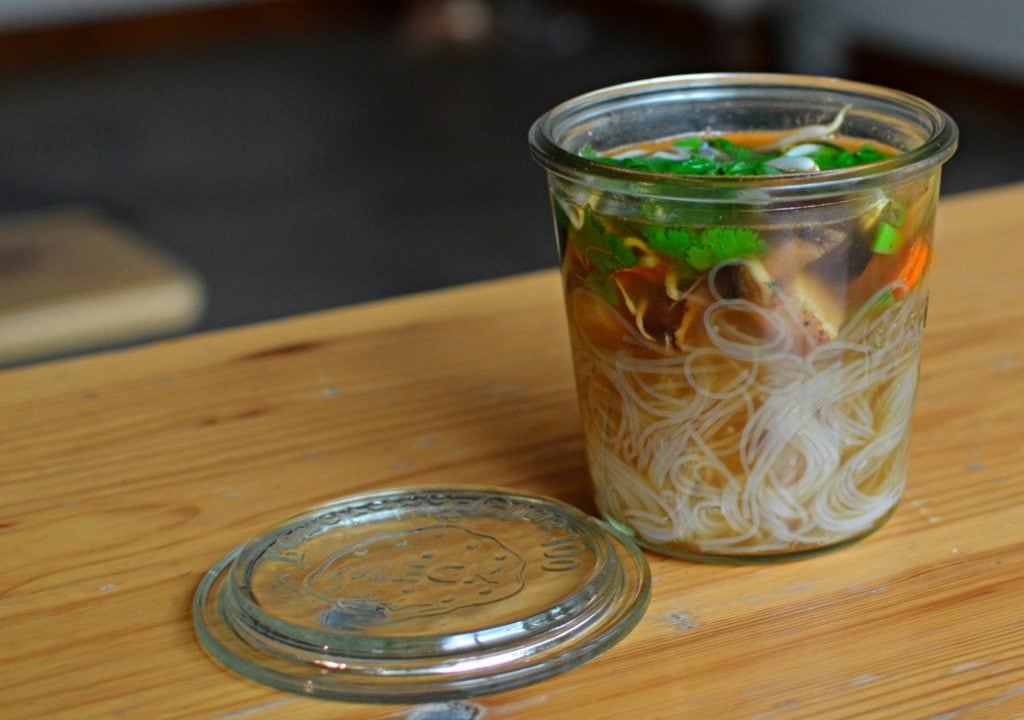 I also tried Rebella Bex’s vegan Pho. It was a simple, yet satisfying and tasty Vietnamese soup with rice noodles, mushrooms, tofu, carrots, and a savory broth.

I highly recommend Rebella Bex in Munich for a healthy and energizing vegan lunch that feeds both body and soul. 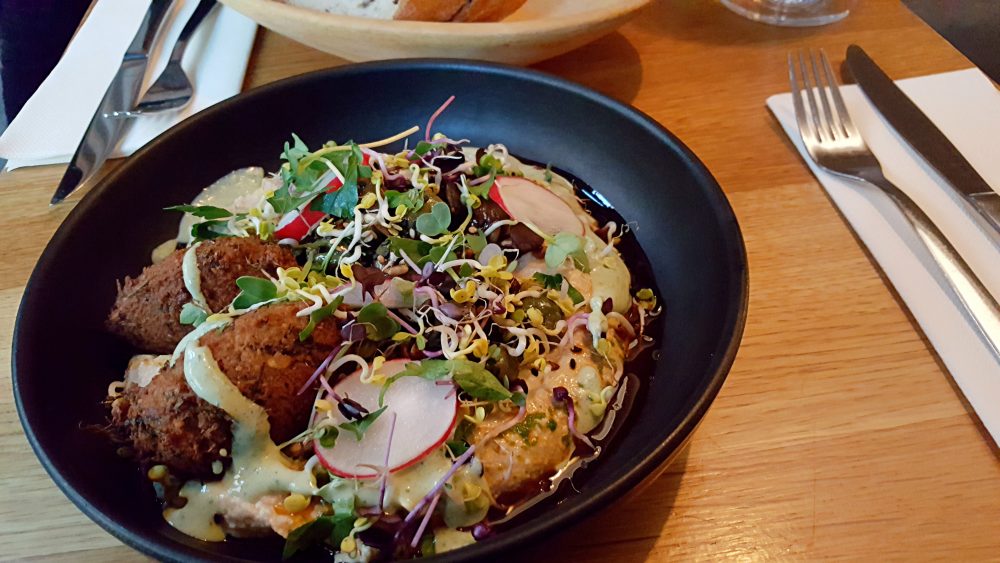 Eating at Gratitude, a modern vegan eatery in Munich, will make you grateful for traditional dishes from various cuisines made with a twist.

I sampled the vegan tacos and vegan falafel with hummus. Sounds pretty standard right? No, the tacos came with spicy kimchee (Korean pickled cabbage) making them more special than your typical plate of tacos.

The falafel and hummus came drizzled with a creamy savory sauce and topped with delicate baby greens and radish. A balanced dish, that can otherwise feel quite oily and unhealthy.

If you’re in the mood for delicious vegan comfort food made with a twist head to Gratitude. 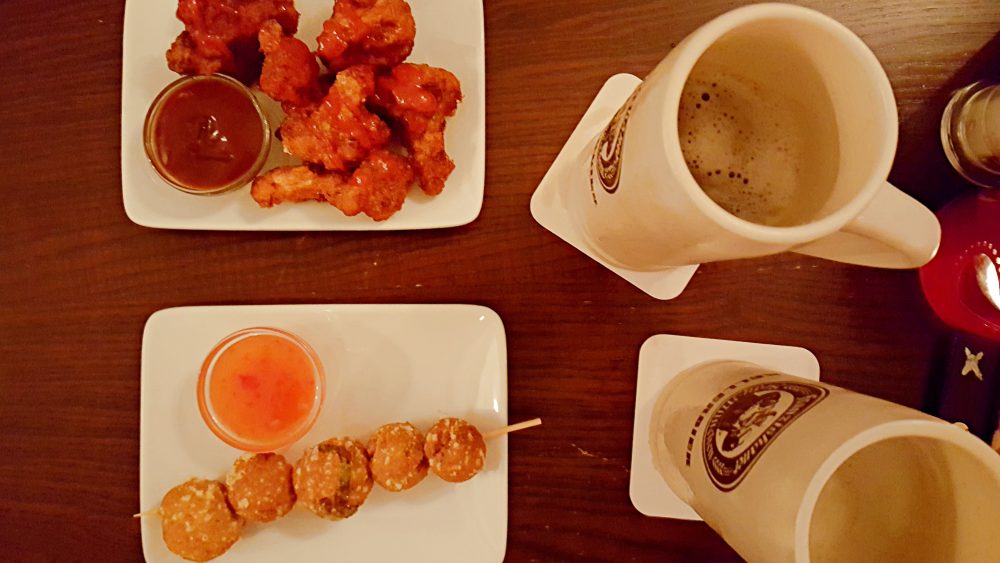 After a very long day exploring Munich on foot a craving for beer and pub food hit. I started to daydream about tangy, spicy wings, fried cheese, and towering mugs of icy cold German beer.

Bodhi Veganes Restaurant & Bar made all my dreams come true. This vegan pub and restaurant serves veganized versions of bar food, Bavarian food, burgers, and delectable desserts. They serve up some of the best vegan food in Munich!

The vegan cauliflower buffalo wings were heaven. Crispy, crunchy, tangy, spicy, and totally naughty. Even better were the vegan chili cheese balls with their uber creamy center wrapped in a crunchy fried exterior. Both perfect partners to a huge frosty mug of Bavarian beer.

If you’re looking for a superb vegan pub experience head to Bodhi. Everything on the menu sounds amazing and it’s all homemade and 100% vegan. 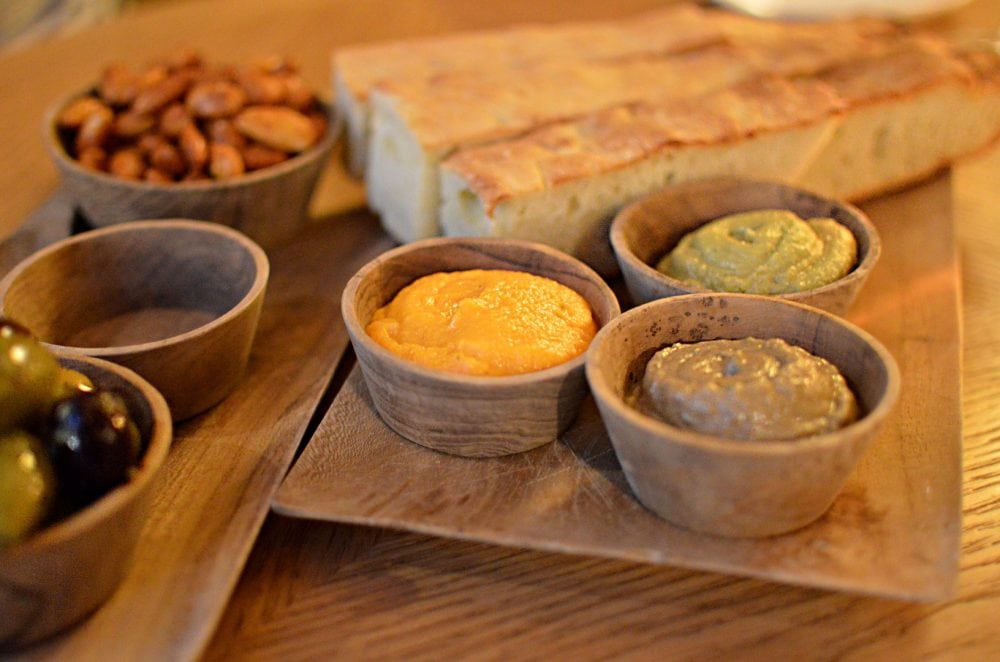 Lovers of wine and Mediterranean cuisine should head to the elegant, yet casual GRAPES Restaurant and Wine Bar located in the lovely CORTIINA boutique hotel in Munich.

I was pleasantly surprised to find that the restaurant had plenty of vegan food options. I placed my care in the hands of the talented wait staff and asked them to bring me a variety of dishes to sample. They returned with what felt like a never ending selection of salty olives and almonds, tasty savory dips, superb whole steamed artichoke with zesty mustard dipping sauce, and flatbread topped with arugula, mushrooms, and tomato sauce. The wine suggested by the waiter, a dry German riesling, paired perfectly with the dishes.

I highly recommend having dinner at GRAPES if you’re looking for a stellar wine and food experience in a cozy and relaxed setting.

Embracing the Tourist Trap That is Victuals Market Munich 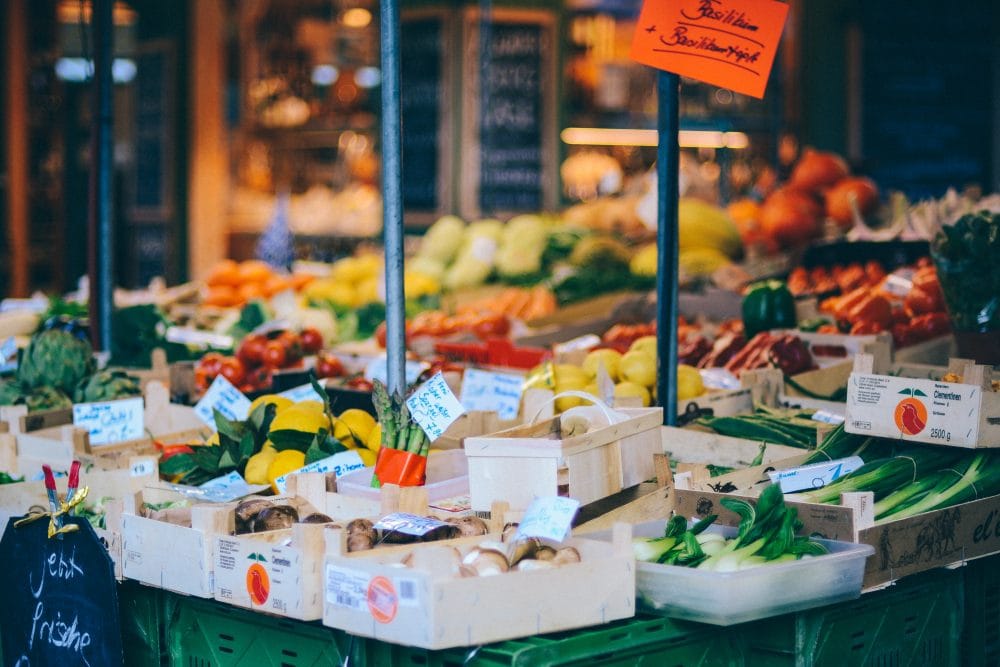 Sounds pretty horrible right? Actually, wandering around the market admiring all the unaffordable delights for half an hour somehow manages to be a pretty nice experience. Especially if you end at one of the cliche beer gardens with a hefty mug of German brew and a pretzel that’s bigger than your own head. Not exactly the best vegan food in Munich, but it’s still pretty damn good. 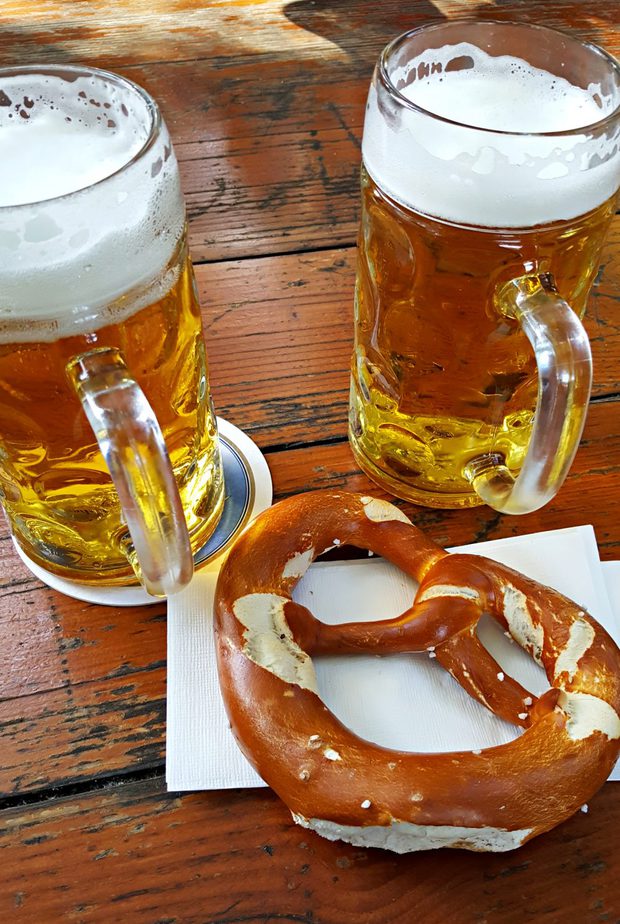 Where to Stay: The Most Vegan Friendly Hotels in Munich

Here are two superb and vegan-friendly hotels that I personally stayed at while in Munich. 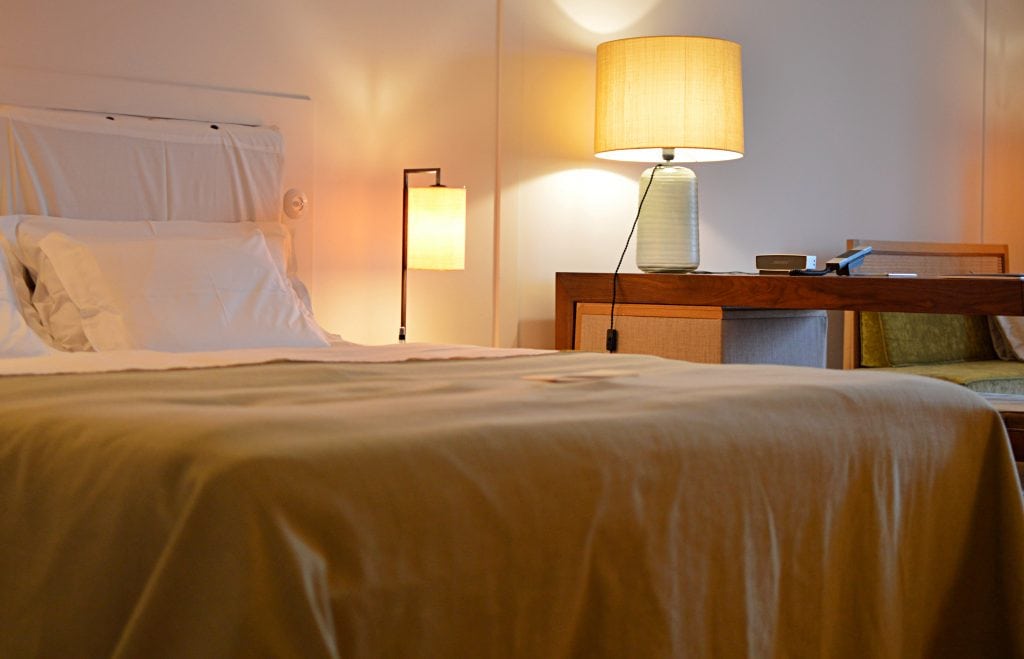 LOUIS Hotel in Munich is remarkable, and I don’t use that word lightly. I’ve stayed in a lot of five star hotels in my life and this one ranks at the top of the list.

With its exceptional location (mere steps away from Victuals Market) warm and knowledgable staff, stunning decor, and fabulous vegan food, staying at LOUIS Hotel is a special experience. 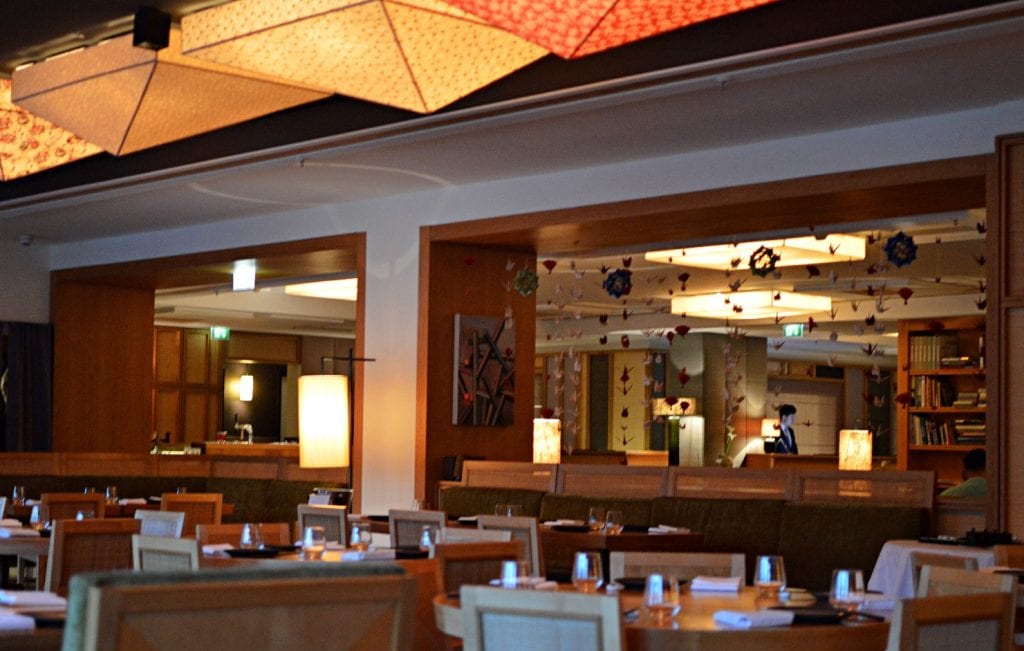 The hotel’s design is an elegant mix of Parisian and Japanese decor and details using hand crafted walnut and oak furniture, natural stone, and bright tiles. The result of this cultural marriage is an atmosphere that feels serene and luxurious, yet manages to remain utterly unstuffy.

If you want to experience the height of luxury and amazing vegan cuisine in the center of Munich, don’t hesitate to book your stay at LOUIS Hotel. 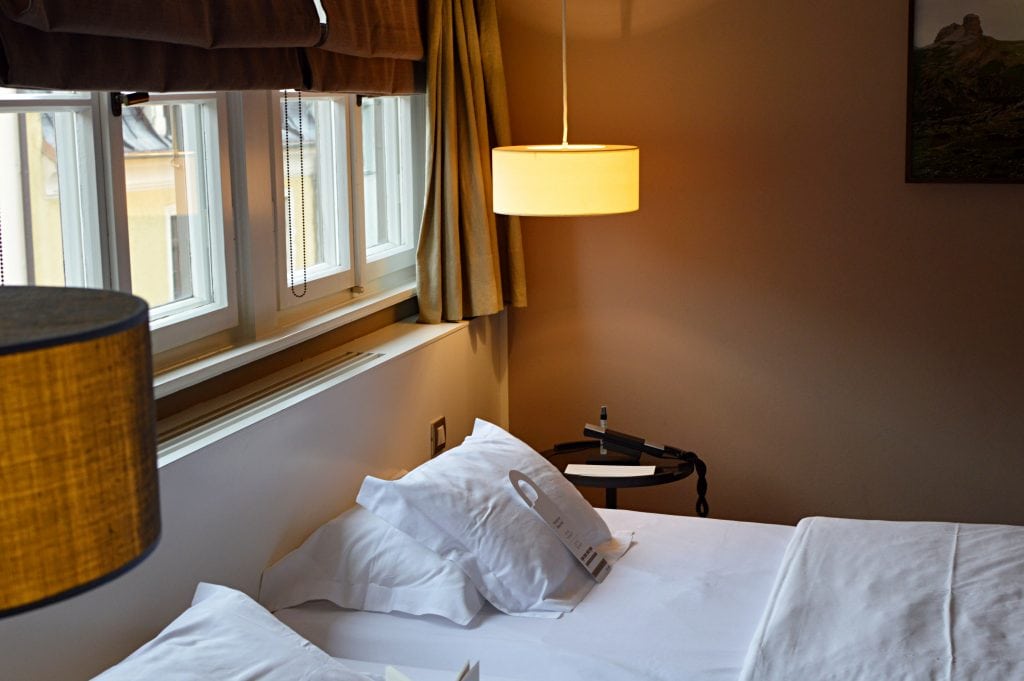 CORTIINA Hotel is one of Munich’s best design and boutique hotels. This small and cozy hotel is excellently located in central Munich near most any site you might want to see during your visit. Rooms are stunningly decorated with dark oak furnishings, natural stone, and adorned with fresh flowers. 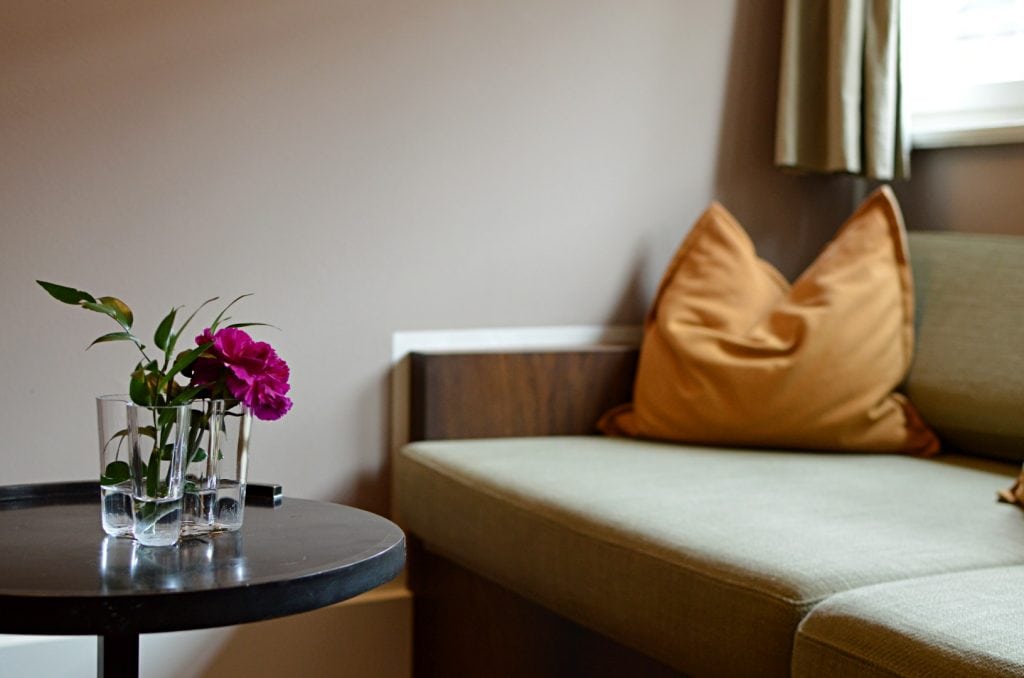 Their natural rubber mattresses and unbleached cotton sheets make for a wonderful night’s sleep, and the fantastic restaurant and breakfast are excellent choices for vegan travelers. If you’re looking for a special experience while traveling to Munich, CORTIIN Hotel is highly recommended.

Want More Vegan Food in Germany? Check out my guides to all the best vegan food in Berlin and Leipzig.

Like This Article About the Best Vegan Food in Munich? Pin It!

Sponsorship Disclaimer: Big thank you to LOUIS Hotel, CORTIINA Hotel, SIGGIS, Rebella Bex, and Max Pett for hosting us during our stay in Munich and for treating to some of the best vegan food in Munich. As always, opinions expressed are 100% genuine.

Wow, I really love your post! On my next trip to Munich I will definitely try some of the restaurant tips you shared! Thanks for sharing!

Awesome! Hope you have a fantastic time! :)