Hamburg is Germany’s second largest city with nearly two million inhabitants. It’s a charming and beautiful city with hundreds of bridges and even more canals than Venice and Amsterdam combined! As if that weren’t enough reason to visit there’s more! The vegan Hamburg scene is absolutely amazing! 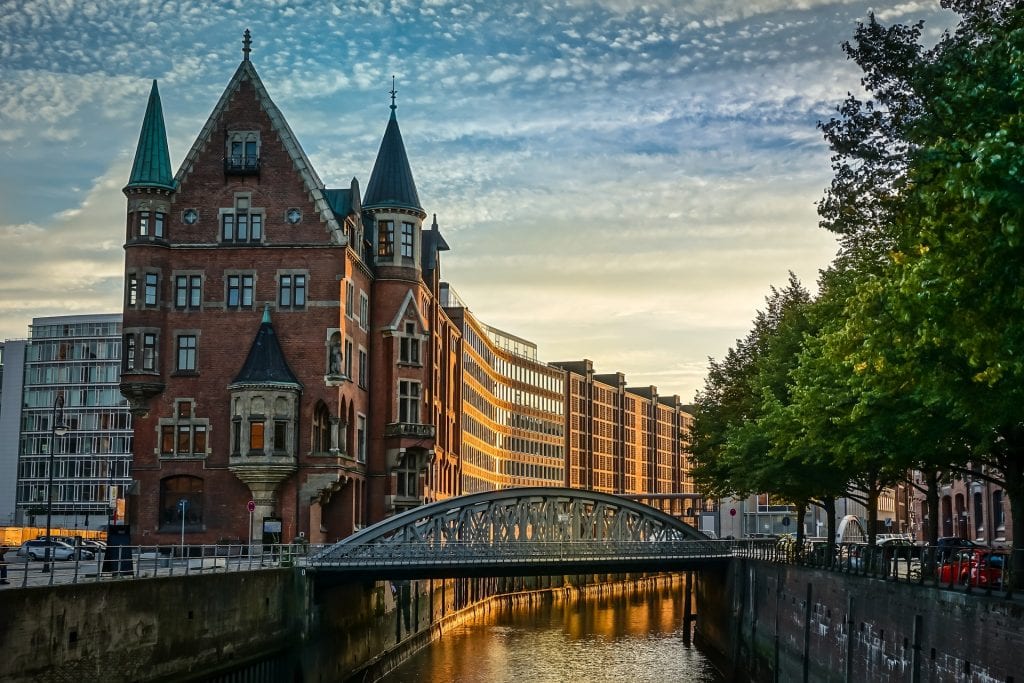 Prior to visiting I heard a lot of positive things about Hamburg from other vegans and eco-conscious people. The city did not disappoint. Turns out it’s one of the best cities in Germany for vegan food and eco-friendly vegan fashion and lifestyle products.

Need an eco-friendly toothbrush holder? How about a fair trade vegan hoodie? Maybe you’re craving a big greasy vegan pizza, or some vegan mac-n-cheese. You can find it all, and more, in Hamburg Germany.

There’s even an all vegan B&B in Hamburg! I was lucky enough to stay there. All the details on that are at the end of the article. 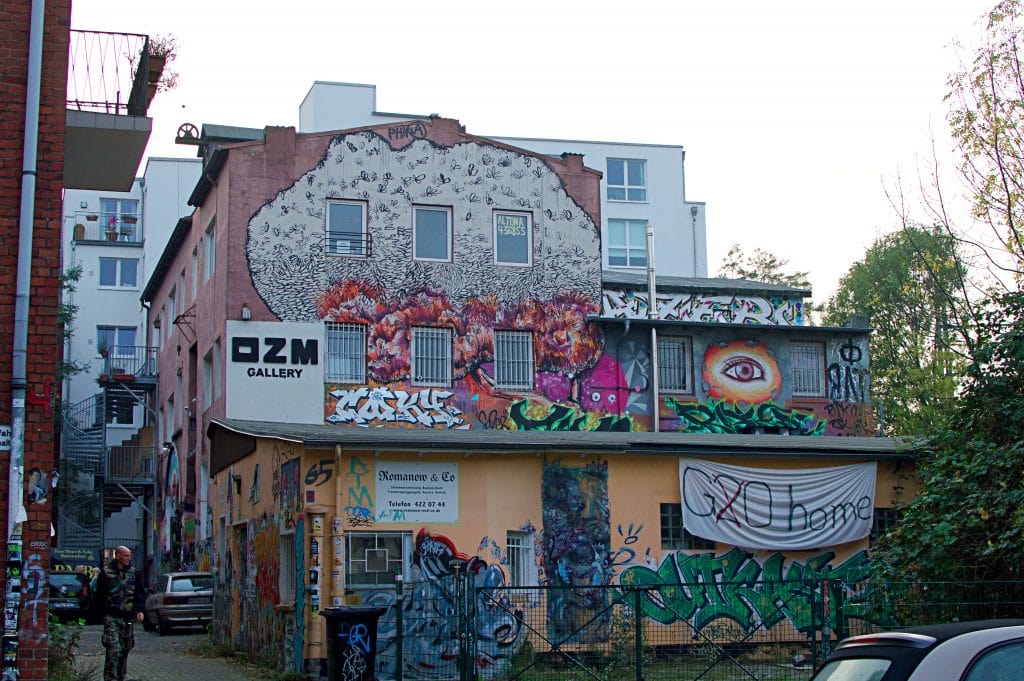 I spent four nights in this German city and it was just enough time to get a taste of the Hamburg vegan scene. I did my best to sample some of the best vegan restaurants in Hamburg, plus managed to dip into a few lovely vegan-friendly spots. Here’s what I sunk my teeth into in Hamburg Germany! 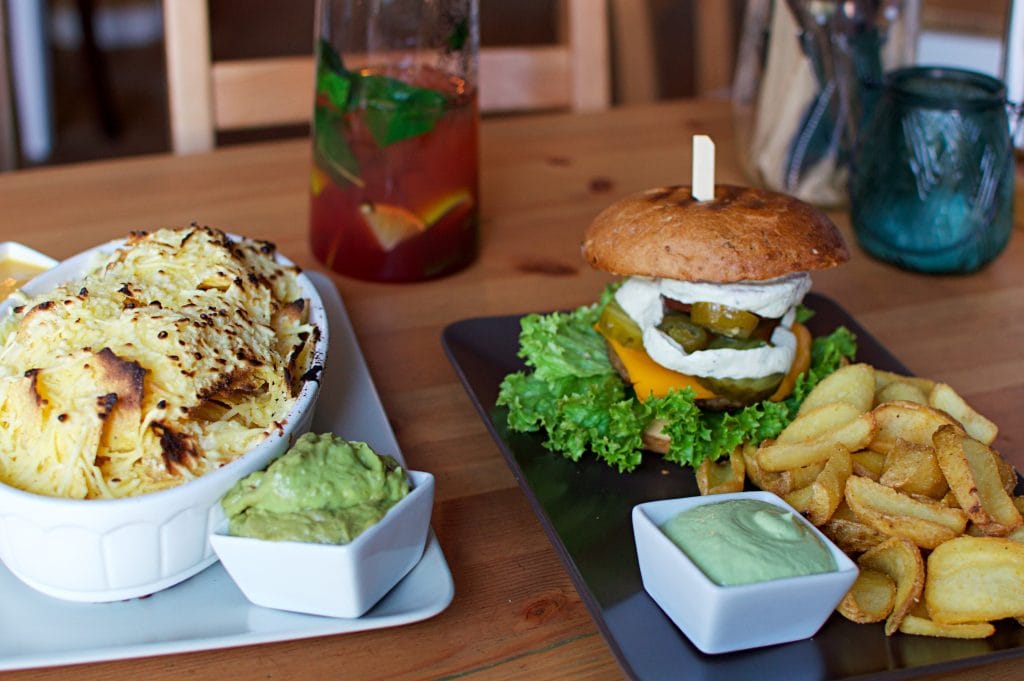 Remember that scene from When Harry Met Sally? You know the one. It’s where she oh so convincingly fakes an orgasm in the diner? Well, I kind of want to make the same noises she made when I think about the food I had at Froindlichst – The Vegan Muscateers in Hamburg.

I mean, just look at that burger. Those jalapeños. That sauce. The cheese. And those perfectly-shaped-good-for-scooping-up-sauce-fries that come with it. It was amazing.

The uber cheezy nachos with their burnt crunchy bits stuck to the edges of the ceramic dish were just as good too.

That’s why Froindlichst is my number one pick for the best vegan food in Hamburg. You absolutely must go when you’re in town.

Note: If you have the urge to utter orgasmic noises while chewing on their dishes, you may want to suppress them. Would be a shame to get arrested for being indecent before finishing your meal. I went to Mammalicious for the vegan pancakes with maple syrup. My expectations were high, and to be honest they weren’t great.

However, that wasn’t the only think on the menu that we ordered. Like a superhero their vegan mac-n-cheese swooped in and saved the day…er dining experience. It was gooey, savory, hot, and unbelievably comforting. Totally worth the trip on its own.

SlimJims Pizza is not a vegan restaurant, but they do have vegan pizza and plenty of vegan toppings to choose from. Including vegan cheese, veggies, and vegan salami.

This little restaurant can get slammed with customers, so a wait is inevitable. Regardless, it’s absolutely worth it.

The thin crust is crispy and the vegan toppings are fantastic. Washed down with a beer, it’s an excellently sinful dinner and some of the best vegan food in Hamburg.

If you have a vegan pizza craving while in Hamburg, don’t even think about it. Just go to SlimJims. 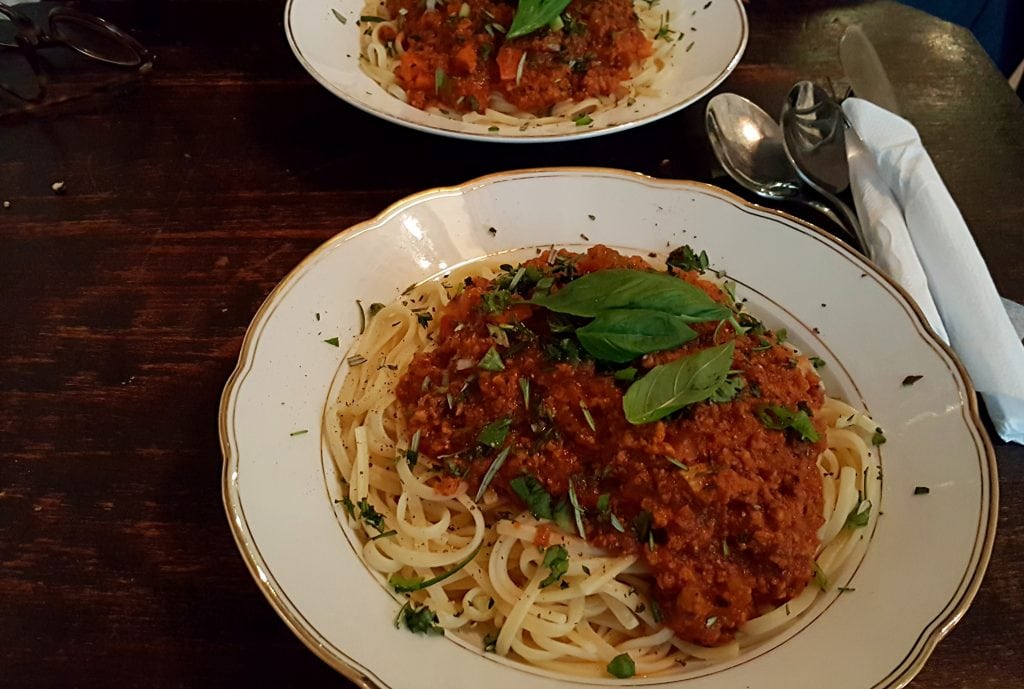 Nasch is a teeny-tiny almost entirely vegan cafe and restaurant in Hamburg. For some reason, they offer dairy milk for coffee, but everything else is vegan. Including the cookies that are named after superheroes.

We went one afternoon and had their daily special – Spaghetti Bolognese. After weeks of traveling around Germany eating things like pizza and burgers, this meal was exactly what we both needed. It tasted home cooked, was super comforting, and incredibly filling.

If you need a little break from vegan fast food, Nasch is a great option. 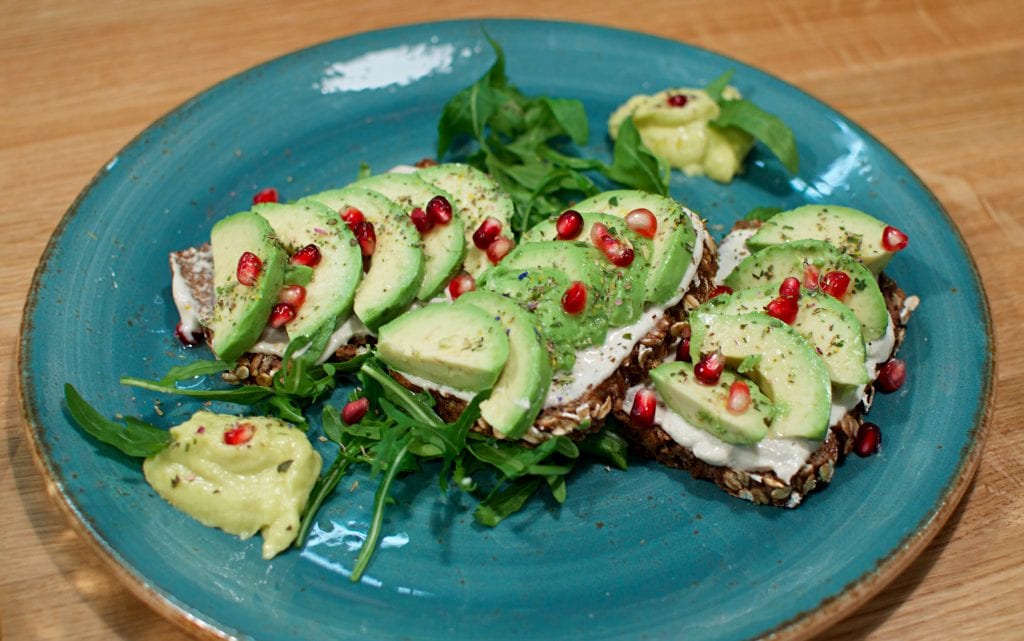 Dining at Lebeleicht in Hamburg is like getting a vitamin and mineral boost. Everything on their menu is super healthy. Don’t let that scare you off though, the food is damn good.

They also have a lot of nice fresh juice mixes to choose from. Though they all come in plastic bottles, regardless if you’re dining in or getting takeaway, so that’s the downside, but they are super tasty.

Lebeleicht is a great option if you’ve had a few late nights out in Hamburg and need to recharge your batteries and give your body a little boost of energy. 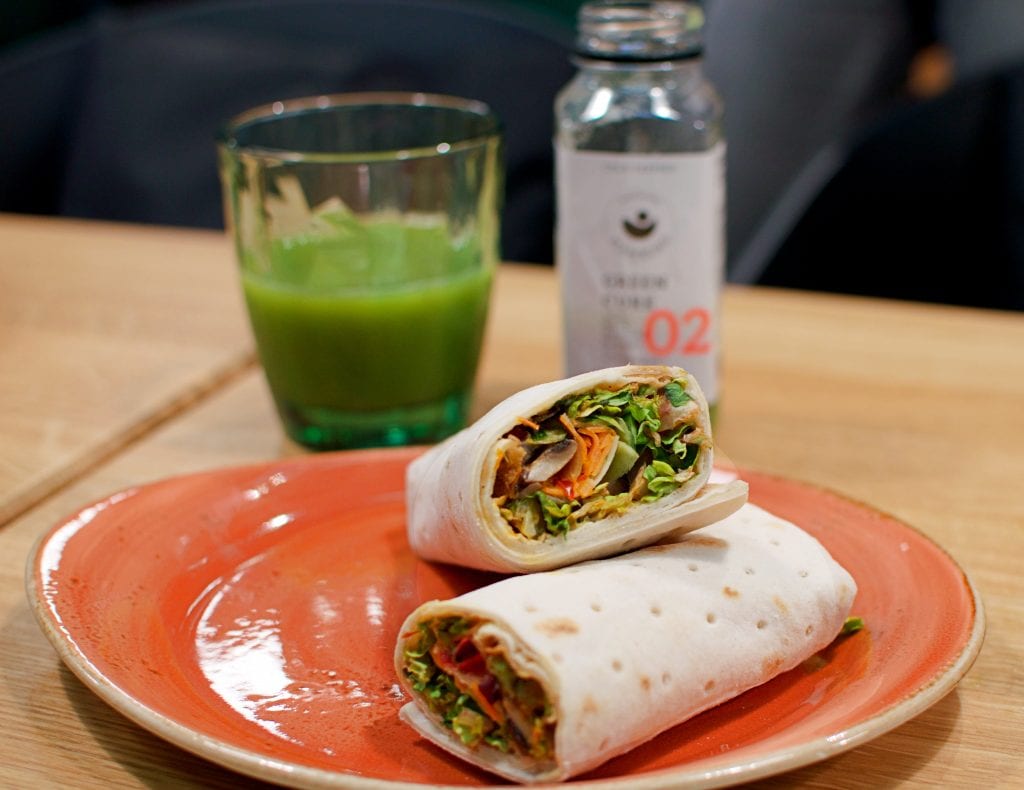 As much as I wish I had a bottomless pit of a stomach, I simply don’t. It can be a real pain in the ass, especially when you have limited time in a city and seemingly hundreds of enticing vegan dining options.

That’s why I didn’t actually have a chance to eat much at HappenPappen, which I understand has some of the best vegan food in Hamburg. I was, however, fortunate enough to have their coffee and vegan banana bread and it was outstanding.

If their main courses are nearly as good as the banana bread, and from the crowds I am sure they are, then it’s totally worth waiting for a table to open up at HappenPappen. 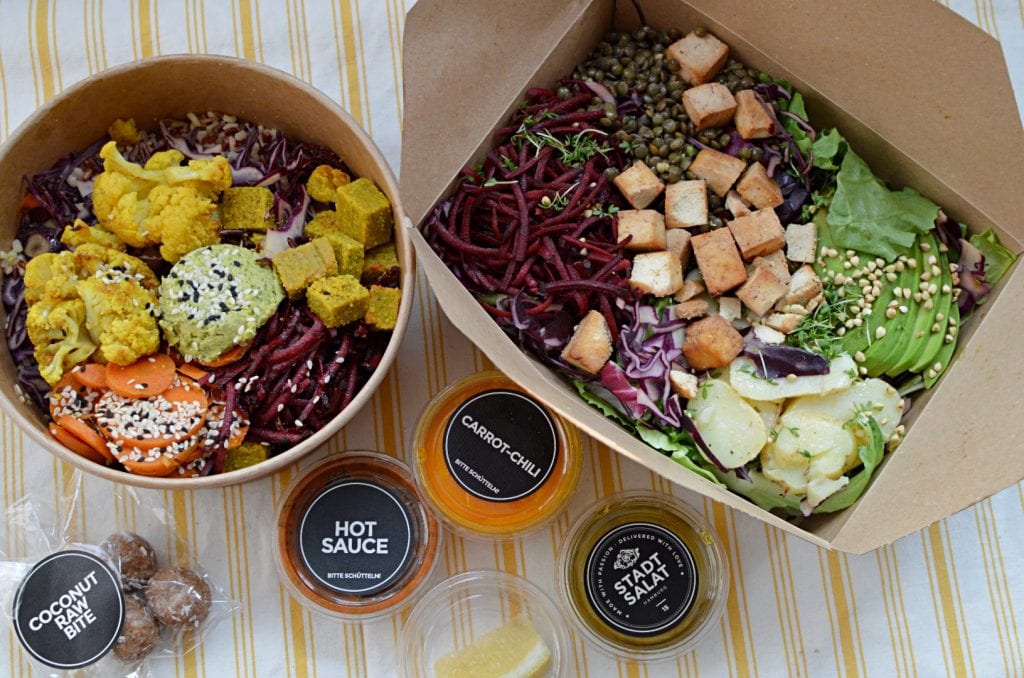 Sometimes when I’ve been traveling for a while, especially after a long bus, train, or car ride I just don’t feel like making the effort to go out and find something to eat.

Enter Stadtsalat. Hamburg’s best vegan-friendly salad delivery company. There are loads of tasty options on the menu, including tofu, lentils, falafel, cauliflower, and potatoes to choose from.

You can order pre-designed salads or build your own. Top them off with one of the many vegan dressings, and come coconut balls and it’s the perfect lazy dinner or lunch. 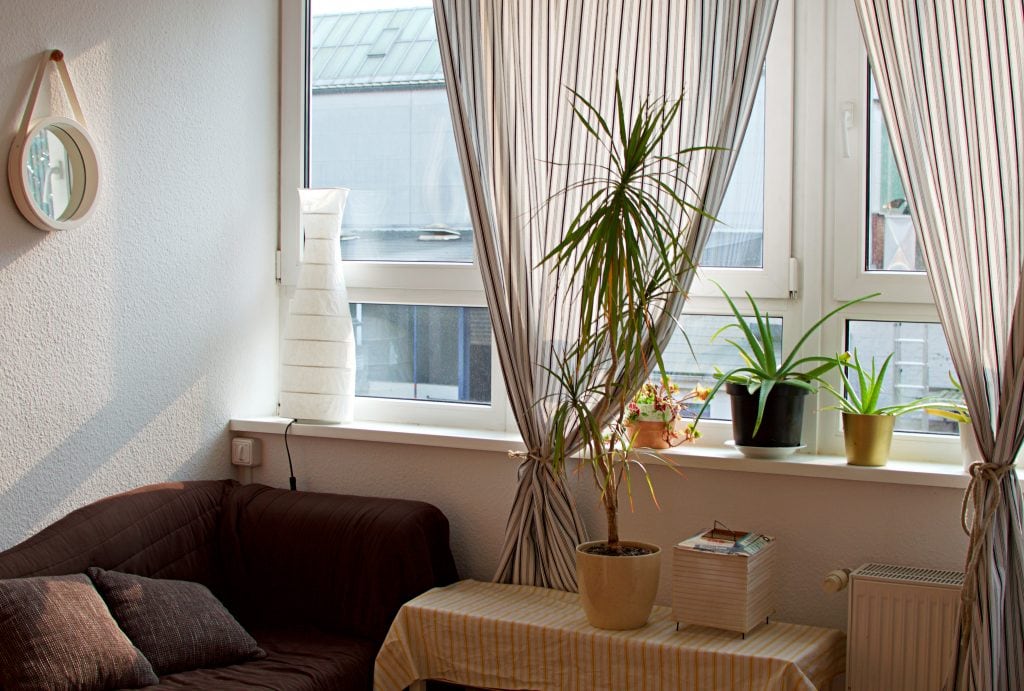 If you’re looking for the most vegan-friendly accommodation option in Hamburg, look no further than Green Haven Vegan Bed & Breakfast.

This B&B is family run establishment and is totally vegan. Guests can choose from three different rooms with shared bathrooms, a private apartment complete with a kitchen (where we stayed), or if you’re feeling a little adventurous a cute little trailer in the garden.

The communal rooms for guests include a cozy living room area with comfy sofas and a dining room area. There is even a well-stocked kitchen, so you can make your own breakfast, or if you’re feeling lazy order vegan breakfast from the owner the night before. 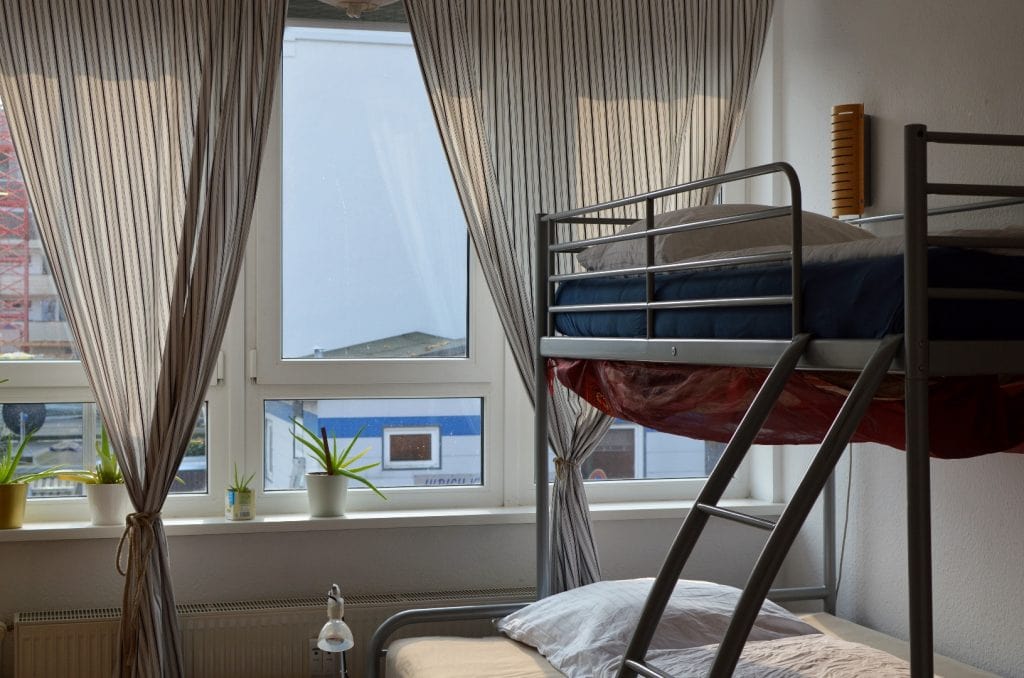 Green Haven not only focuses on offering guests a vegan experience, they are also eco-conscious. Most of the furnishings in the B&B are upcycled materials, and their electricity is solar and green.

Green Haven isn’t exactly in the center of Hamburg, but the location is excellent nonetheless. It’s only 15 minutes by S-Bahn from the airport, and eight minutes to the city center. The B&B is also located within a few minutes walk to a shopping center and a bio grocery store.

Sponsorship Disclaimer: Big thank you to Green Haven, Froindlichst, Lebeleicht, and Stadtsalat for hosting me during my stay in Hamburg. As always, opinions expressed are 100% genuine. As you can see I included a few handy affiliate links in case you want to book accommodations. I receive a small commission for any sales made, without any additional cost to you, dear reader.