Looking for the vegan dessert in Prague? I’ve lived in Prague for years, so I know exactly where to go to feed that sweet tooth!

Prague was recently named the city with the most vegan restaurants per capita in Europe. That means not only can you finding marvelous vegan food in Prague for any meal and plenty of vegan shopping options, but you can also find magnificent vegan dessert in Prague.

Sinking your teeth into superb vegan cakes, donuts, ice cream, and even raw desserts are all possible in Prague!

I recently started a Youtube Series to showcase some of my favorite vegan finds around Prague. Below is the latest video. Here is the full playlist.

Before we dive in…here are a few other articles about the vegan scene in Prague and the Czech Republic:

My local’s guide to everything you need to know about visiting or living in Prague as a vegan!

Here are my favorite spots for the best vegan desserts in Prague.

Blue Vegan Pig Shop is an all vegan donut shop in the Vršovice neighborhood of Prague. They create a very different kind of donut than the aforementioned shop. These donuts are uber fluffy and come in a wide variety of flavors.

Most donuts are cream filled topped with sweetly flavored icing. This is where they really shine! The Pistachio donut is stuffed with decadent sweet cream and topped with bright green icing. Topped with three salty crunchy pistachio nuts for a contrasting flavor makes for a well balanced flavor experience. The Crème brûlée donut lives up to the name. Topped with burnt sugar icing and stuffed with creamy vanilla custard, it smacks of the original French masterpiece.

The downside of Blue Pig is its opening hours. If you are craving a donut for breakfast, you’re out of luck. They don’t open till noon!

VIDEO: Check out Episode 4 of Eating Vegan in Prague to see inside!

La Donuteria is a chain of donut shops around the world. With two locations in Prague, this donut shop dishes out both vegan and non-vegan donuts.

These fried, sugared delights come in a variety of interesting flavors. Mostly fruit centric, but caramel, coconut, and chocolate are also up for grabs.

My favorite? The Caramel Lotus. To die for!

What I really love about these donuts are their pillowy interior and crunchy exterior.

Truly a fantastic way to start the day, or get your sugar rush in the afternoon.

Seriously, this is the best vegan ice cream I’ve ever had in my life. Full stop!

Lines tend to be long at the Old Town and New Town locations, but it’s well worth the wait.

The vegan ice cream flavors weren’t on display in the Old Town location the last time I visited, so ask a friendly staff member what the daily options are. If salted peanut is on the menu, don’t pass it up. It’s ooey-gooey-creamy-good!

Check out Episode 7 of Eating Vegan in Prague to see inside!

Palo Verde is a totally vegan restaurant that serves all kinds of delicious food, like tapas, homemade pasta, and delicious desserts.

Depending on the day Palo Verde could have vegan cronuts, macaroons, croissants, cakes, tarts, cupcakes, and breads on offer.

What I like about Palo Verde’s vegan desserts, aside from the deliciousness of them, is that they are all beautifully presented. Some are even downright artistic. It’s the only place in Prague I know if that sells class French style vegan desserts that you might expect to see in a Parisian pastry shop window.

Finally, if you want to start your morning off with sweets, Palo Verde has scrumptious vegan waffles! YUM!

Share Sweetbar is owned and operated by the same folks as Palo Verde and Moment. So, you know it’s good!

This all vegan, almost all desserts bar has a large variety of sweets including cakes, cake pops, mousse, tarts, sweet breads and more.

I also tried their vegan chai latte, which was a creamy concoction of delicious spices and black tea.

In addition to their daily vegan desserts, you can order entire cakes for special occasions like birthdays and weddings. So, keep them in mind for your next celebration!

SLOW Cafe is a vegetarian specialty coffee and brunch bar with a cozy and relaxed vibe and usually at least two vegan sweets on offer daily.

They also have a couple of vegan brunch items on the menu that changes weekly. I’d suggest the vegan pancakes if they’re available or any of their veganzed Czech dessert from the case.

What I love about Slow Cafe, aside from the delicious coffee and cakes, is the fact that they have recently started selling plants from their shop. So, it’s now a bit of a jungle in there, which means the vibe is very relaxed.

For excellent, Prague brewed coffee and a few vegan dessert options head to any one of the Mama Coffee shops in Prague.

Some of their sweets change depending on the season. For example, my absolute favorite is the vegan poppy seed koláček but it’s rarely available. They also usually have yummy cinnamon rolls, pumpkin cream filled cinnamon rolls, and berry rolls. Just check to see if they’re fresh. After a day they dry out and are not really good.

Most recently they’ve added an absolutely delicious vegan carrot bread to the menu. The icing is caramel and sesame seed flavored. It’s outstanding!

Their vegan banana bread and chocolate bábovička (shown above) are almost always available. Both are really great options if they are fresh. Unfortunately, like the rolls, they do tend to dry out a bit if they’ve been around for a while.

Mama is a great option if you want to head somewhere that isn’t 100% vegan but is almost guaranteed to have some kind of yummy vegan sweets.

Coffee room is a vegetarian and vegan coffee shop in Vinohrady. They serve delicious coffee from roasters in Berlin and Amsterdam, and have a nice selection of vegan cakes, bowls, and chlebíčky (Czech open faced sandwiches).

There are usually vegan options from Mercy bakery (excellent vegan whole seller) like the outstanding vegan carrot muffin (above). If you don’t see it in the case, ask for it. Sometimes they have it but haven’t displayed it for some reason.

Additionally, their coffee is always of the highest quality!

Bonus, the cafe is really cute and each table is adorned with sweet little cactus plants.

Conductor is a tiny, mostly takeaway, restaurant with an equally tiny menu. The restaurant serves sandwiches and wraps and also have some daily specials which are usually vegan and usually Asian or Caribbean inspired.

So, anyway on to the reason Conductor made it to this article about the best vegan desserts in Prague!

Conductor only has one vegan dessert, vegan cinnamon rolls, but it’s totally worth visiting just to try them. They’re ooey-gooey-soft, fluffy, and sweet. The perfect answer to a mid-day energy crash, especially if you pair it with some of their stellar coffee!

Just note, the restaurant is tiny. There aren’t tables but you can grab a spot at the counter or take the rolls away to gobble up in the privacy of a near-by park.

They have a small, but nice selection to choose from and the best thing about them (aside from how good they are) is that they are cheap! The dessert above cost less than $2.00. The worst thing about Loving Hut desserts is that I’m usually too full from loading up at the buffet to eat them.

For the best and biggest selection of vegan desserts visit the Na Poříčí location which is conveniently located above an all vegan grocery store, World Vegan.

Angelato is a gelato shop located in Prague’s historic center. It’s been open since 2007 and offers a variety of vegan sorbet flavors that change on a monthly basis (check their website for current offers).

The servers are knowledgeable about the ingredients so just ask if the flavor you desire is vegan or not. I highly recommend trying the mango sorbet. It’s sweet, tangy, and exotically delicious.

NOTE: The above list of places to get vegan desserts in Prague reflects my personal favorites. Here are a few other establishments that offer at least one vegan dessert on the menu. If you know of others, please leave a comment below so I can add them to this list.

Craving something savory? Check out my Vegan Dining Guide to Prague.

Pin It For Later 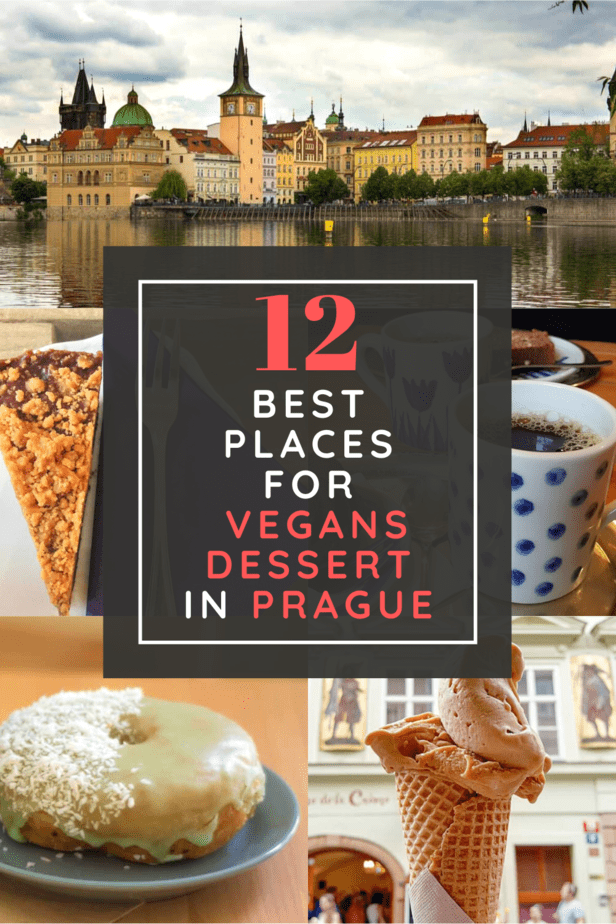 Disclaimer – I’ve included a few handy little affiliate links in case any of my readers want to book accommodations. I receive a small commission for any sales made, without any additional cost to you dear reader.

Yes, Palo Verde is awesome. It's in my main vegan guide. I need to update this one with it. Thanks for reminding me!

Hey :) is there anywhere to get vegan chimney cakes or Czech little pancakes? thank you in advance!

HI Jodie, I hear that there is a place near Charles Bridge called Sweet Dreams that sells vegan trdelnik. I've had the pancakes you are talking about at Moment before. I'm not sure if they are still on the breakfast menu but when they were, they were delicious!! :)

Mercy has closed now, as far as I know - the owner will keep baking for other cafés, but not operating her own.

Donut shop and Coffee room have the same owner, and I am proud to say he's my classmate from uni! :) Very proud of him indeed!

Super sad about Mercy! I've just messaged them to confirm. Hope it's not the case :(