Looking for the best vegan dessert in Madrid? Look no further!

Within Europe, Madrid isn’t particularly known (yet) for its vegan scene. More often (and for good reason of course), London and Berlin will top the lists, and in Spain, Barcelona is known internationally for being more vegan-friendly. However, Madrid deserves more recognition in that department, with 26 vegan establishments and many more that are vegan friendly. This count includes six all vegan bakeries!

Those with a sweet tooth will be happy to hear that no Spanish meal is complete without dessert. So naturally, Madrid has stepped up to the plate with an array of tasty vegan treats that are worth a visit to the Spanish capital alone.

After living in Madrid for over two years and thoroughly scoping out the vegan scene, here are our picks for the best vegan desserts in Madrid. 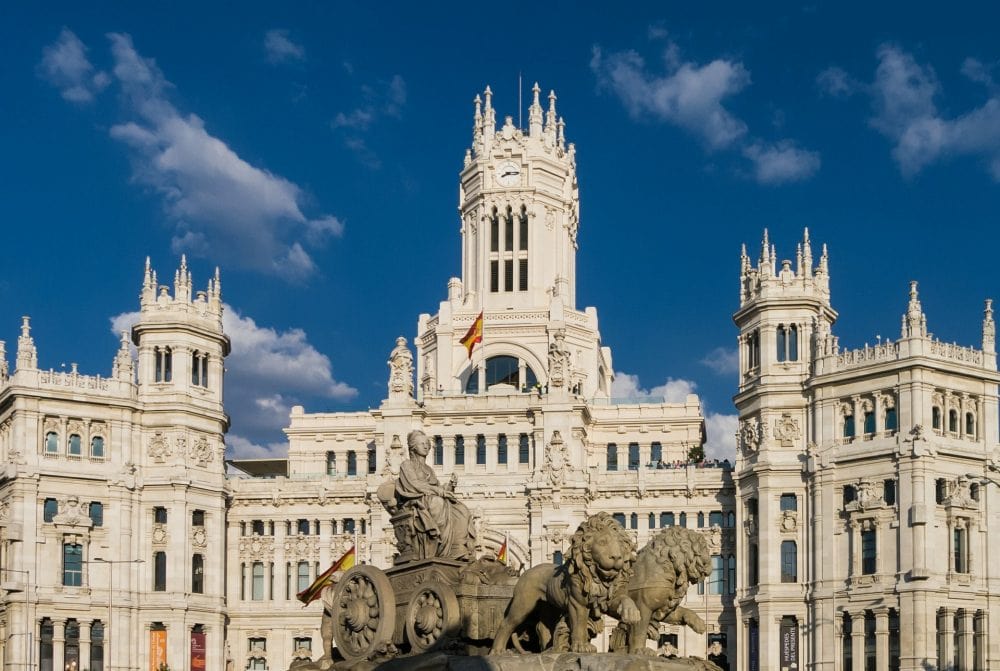 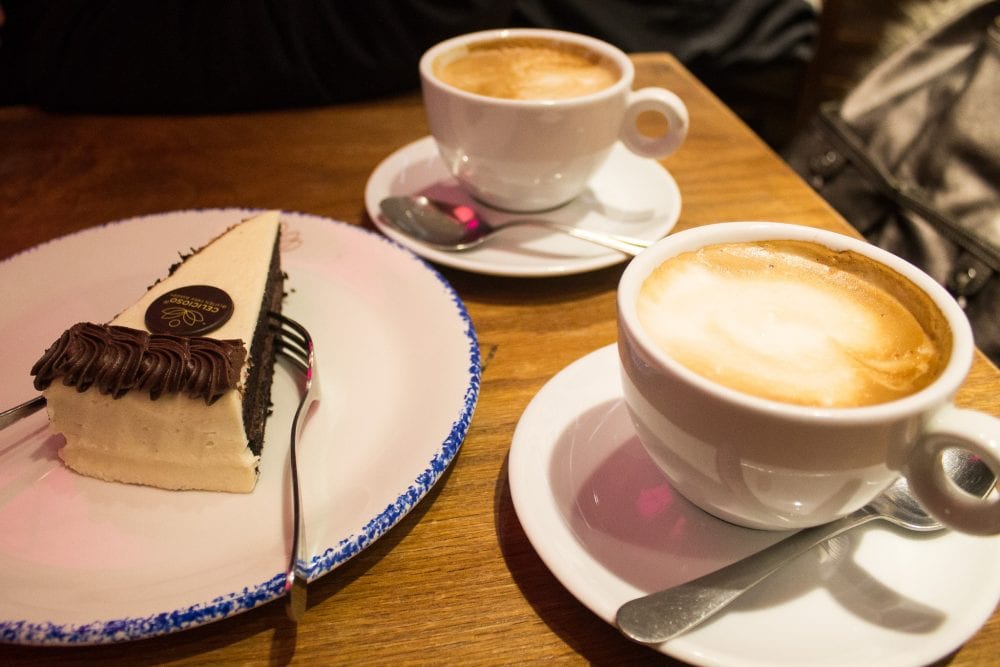 Although Celicioso is a completely gluten-free bakery, you’d never know it. While gluten-free desserts used to be associated (ok, they still are to some extent) with dryness and lack of flavor, that’s far from the case at Celicioso. This bakery and cafe is located just off Gran Vía, one of the main shopping thoroughfares in Madrid.

While Celicioso isn’t entirely vegan, there are several amazing vegan cakes on offer here (including raw ones) that make it well worth a stop. The vegan chocolate and red velvet cakes are rich, indulgent, creamy, and all around super decadent. The chocolate cake was served at an event we went to recently, and everyone was blown away that it was vegan and gluten-free – their cakes are that impressive. Keep in mind that they are sugar bombs though, so you might want to share a piece unless you’ve got a super sweet tooth!

Celicioso also offers seasonal Spanish treats in vegan forms, such as Roscón de Reyes, the traditional Spanish ring cake served around the Christmas holidays. If you are in Madrid around this time, they’re definitely worth a try!

La Colectiva Cafe is a vegan bakery and cafe offering another entry for the “can’t believe it’s vegan” dessert.

It’s not every day that you find a vegan lemon meringue, full stop, let alone one this good. The flaky crust is super buttery tasting and the aquafaba meringue is perfectly fluffy. Pair with some specialty coffee from La Colectiva Cafe and you’ve got a great match. 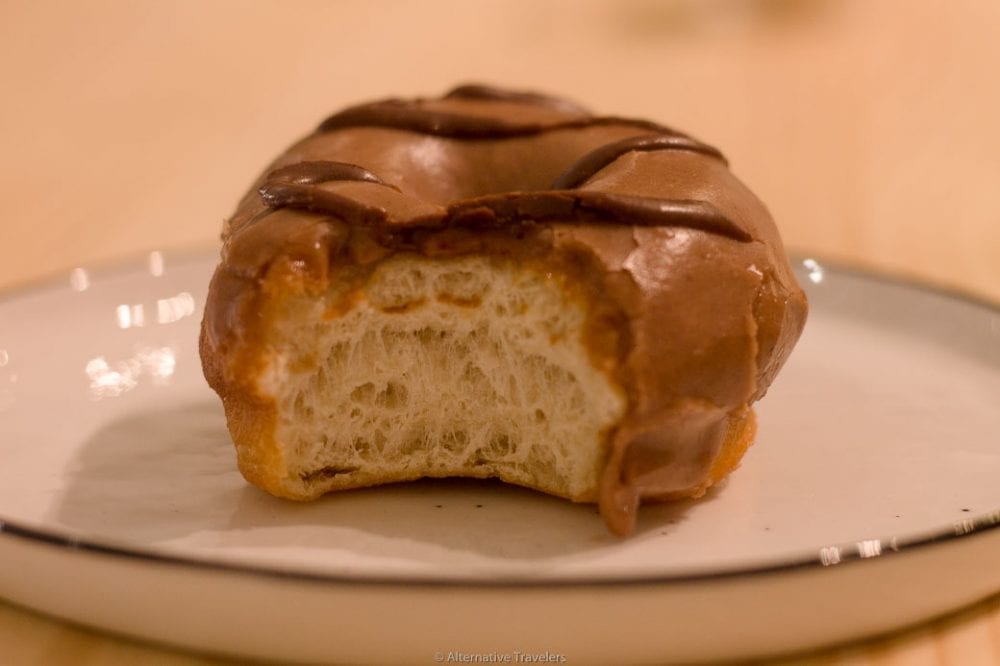 Since their opening in the fall of 2017, Delish has caused quite a splash in Madrid, and not just in the vegan community. Artisanal, handmade doughnuts are not common in Madrid (vegan or not), and Delish has swooped in to fill the much-needed void.

These are honestly some of the best doughnuts we’ve ever had, full stop (and we’ve tried a lot of famous vegan doughnuts). Coming from New York, we have high standards for donuts and appreciate a rich, dense, yet pillowy donut that you can sink your teeth into. These more than surpass the mark and are a must-visit to for vegan dessert lovers in Madrid.

The baker/owner makes them all by hand in various flavors that change daily. Some regular flavors include chocolate pistachio, peanut butter fudge, apple pie, and dulce de leche (one of our favorites). She’s always inventing new flavors and concoctions like the Macadamia Dream, which is filled with condensed milk and topped with macadamia crunchies, or an ice cream doughnut sandwich if you’re really brave!

If that wasn’t enough, Delish serves up some incredible homemade coffee and tea drinks. If you visit in autumn or winter, don’t miss their homemade pumpkin spice latte, made from actual pumpkin that tastes like it too. In the summer, they have homemade iced teas and even a coffee ice cream float!

The cozy yet airy cafe filled with hanging plants is a great place to recuperate after a day of walking around the city.

Note: They are closed Mondays and Tuesdays and for the Spanish siesta between 2:00 pm and 4:30 pm (as many small businesses in Spain do). 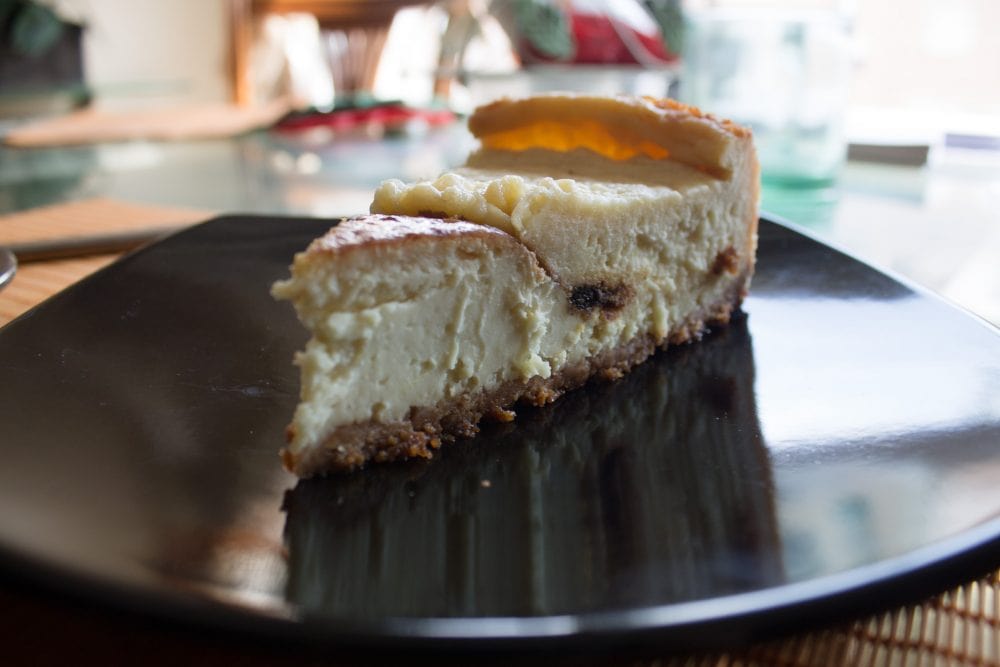 A brand-newcomer to the scene, Landareak, which means “vegetables” in the Basque language, is an all vegan bakery located in the hip neighborhood of Malasaña. All baked goods are created and baked on premises in the “laboratory” that can be seen in the back behind the counter.

The muffins are moist and delicious (get the lemon poppyseed ones!), but a stop here is not complete without trying a slice of Landareak’s cheesecake. This slice of heaven made all our cheesecake dreams come true the moment we tasted its creaminess. With a perfect crust and the right combination of sweet but not too sweet, this yummy specimen quickly topped the top of our cheesecake list. And we are big cheesecake fans, trying every vegan cheesecake we can get our hands on wherever we go! 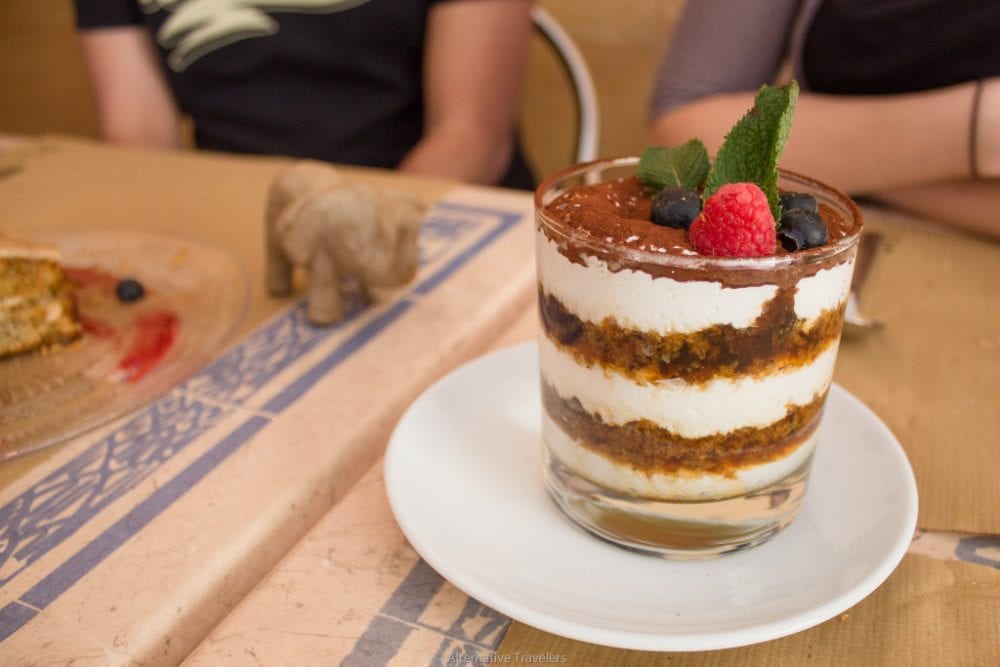 While the rest of the places on our list so far have been bakeries and cafes, Hakuna Matata is a full service restaurant that deserves a place here for its tasty tiramisu. Located in the heart of the northern neighborhood of Tetuán, Hakuna Matata will likely be a bit off the beaten path for most short-term visitors to the city.

But for those intrepid travelers, you’ll be rewarded for your effort with a layered cylinder of fresh and creamy tiramisu that tastes just like you remembered it. The lady fingers are moist and have just enough coffee to cut through the generous dollops of whipped cream. Tiramisu is right up there with cheesecakes in Veren’s favorite dessert list.

While you’re there, don’t miss trying some of their savory dishes, namely the croquetas and esclope that tastes just like fried chicken (but in a good way). 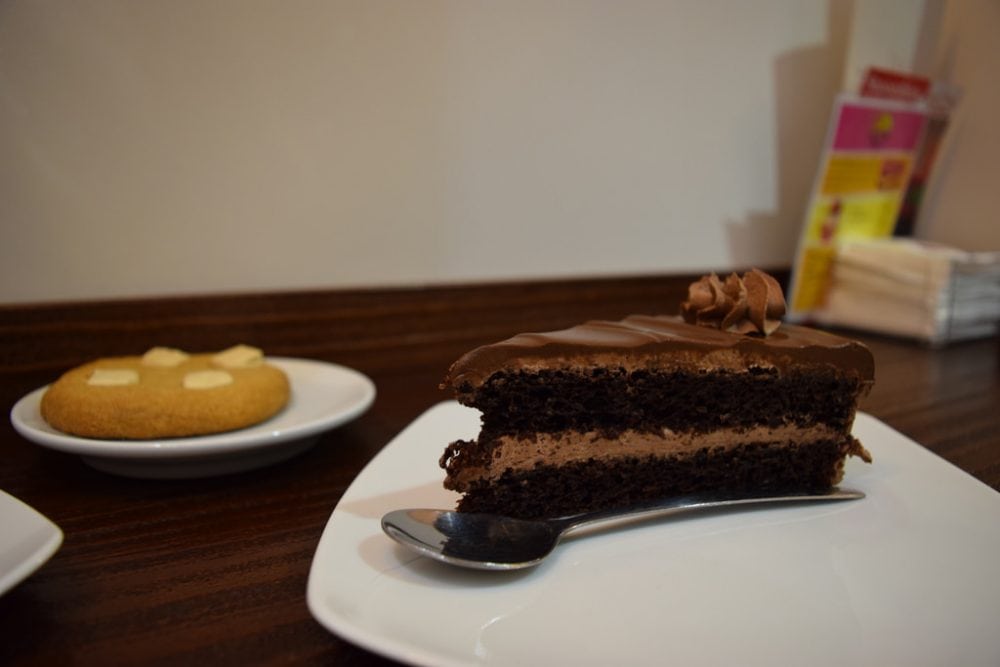 The brand-new (May 2018) Freedom Cakes is an all vegan bakery with some seriously beautiful cakes, which they proudly display in a giant window case that looks out directly out onto the street.

The bakery, which has brightly painted floors to match their colorful cakes, serves a massive variety of flavors for every dessert-lovers palate which they make daily in their facility right next door. A best-seller is their truly amazing death by chocolate. They also have super moist cookies and cupcakes, as well as milkshakes served in fun cactus jars.

One of the best things about this place is that they’re open uncharacteristically late for bakeries in Spain (11 pm Sunday-Thursday and midnight Friday-Saturday), so if you’re out having tapas and want to stop in for a late night dessert, you now know exactly where to go.

So there ya go – the best vegan dessert in Madrid for all tastes! Which one would you choose?

If you’re looking for more specific recommendations and a comprehensive look at Madrid’s vegan scene, our Ultimate Vegan Guide to Madrid has become known as Madrid’s vegan bible. This month, we are also releasing a Madrid Vegan Guidebook packed with even more tips and specifics for plant-based travelers in Madrid! 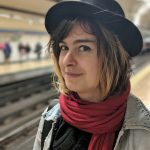 About the Author: Along with her partner Veren, Sam is the co-founder of Alternative Travelers, a website dedicated to sustainable and vegan travel on a budget. Originally from New York, they have been based in Madrid, Spain for two years and travel throughout Europe and beyond via house sitting. They have recently released their first book, The Alternative Travelers’ Vegan Guide to Madrid!