Barcelona is a treasure chest full of vegan and vegetarian restaurants, shops, and markets. Finding them, however, can be a challenge if you don’t know where to look. My vegan Barcelona guide will point you in the right direction!

I’ve been to Barcelona a few times, but never as a vegan. My culinary memories of traveling in Spain are generally peppered with images of jamón (ham).  The stuff is everywhere, even in dishes you wouldn’t expect it to be in. And if there is no ham there is likely to be some other form of meat, seafood, or dairy in it.

I didn’t really know what to expect traveling to Barcelona as a vegan. Let’s just say, my expectations weren’t high and I was fully prepared to cook for myself. However, I eventually discovered that underneath the surface of this meat and seafood-centric city, Barcelona is filled with health food stores, farmers markets, and loads of vegetarian, vegan, and macrobiotic restaurants.

Being Vegan in Barcelona is super easy, if you know where to look. 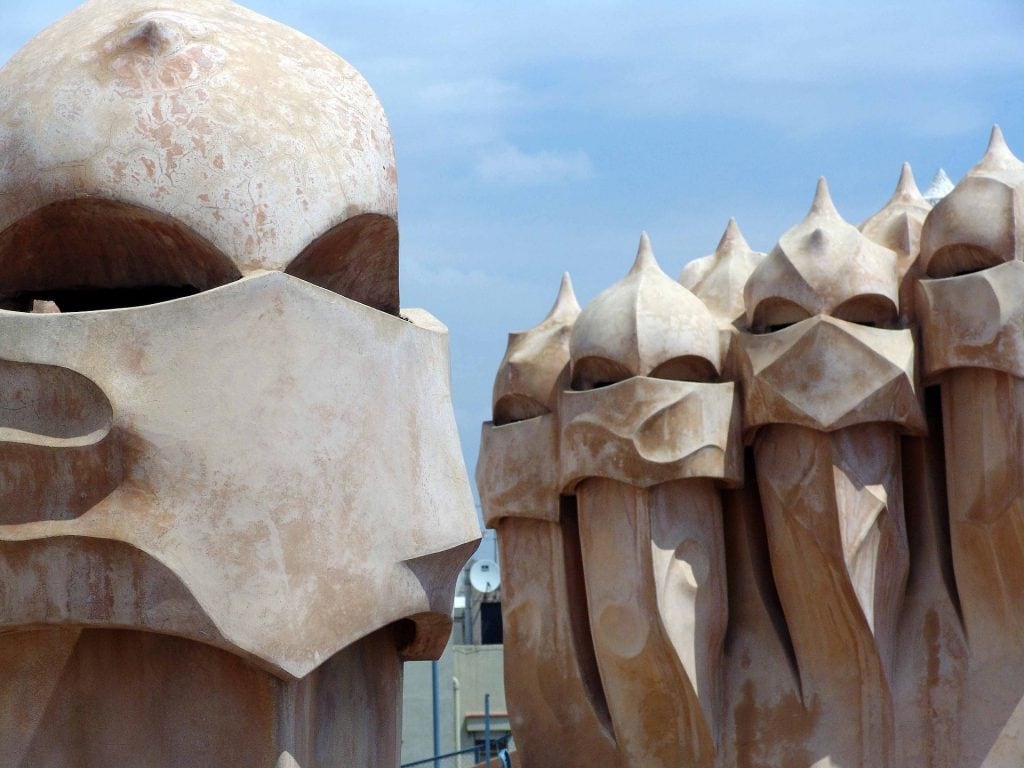 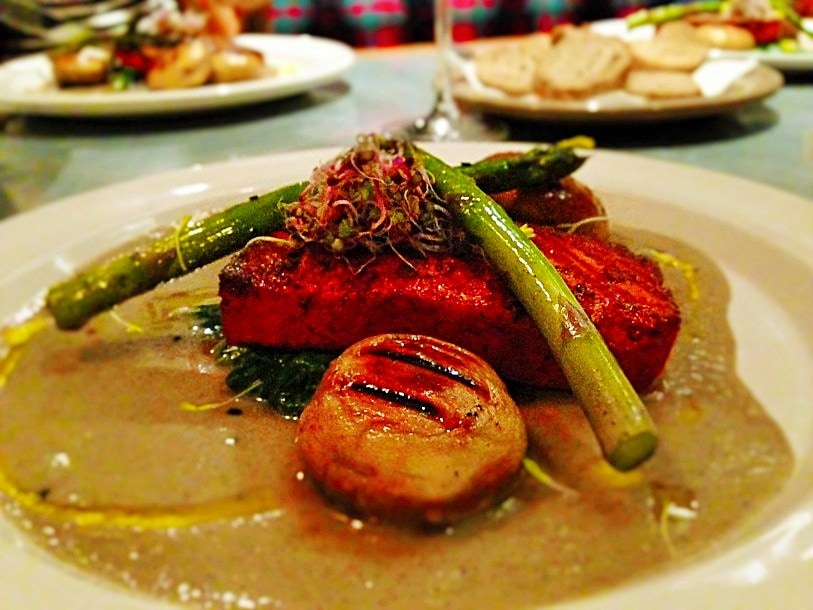 My first vegan friendly restaurant experience in Barcelona, and my favorite, was Teresa Carles.

The restaurant has an open kitchen in the front, friendly staff, charming atmosphere, and an all vegetarian menu with loads of vegan options. 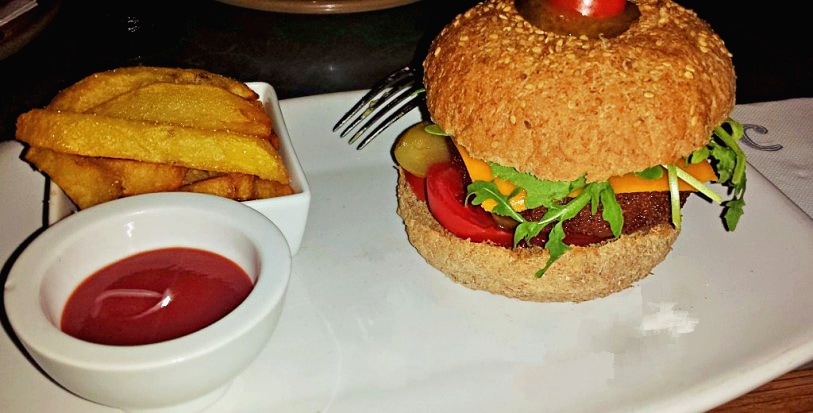 Every aspect of Teresa Carles is fantastic, but the vegan food here is the standout. My favorite dishes were the vegan spinach croquettas, tofu salmon, vegan burger, and the tartare with avocado. 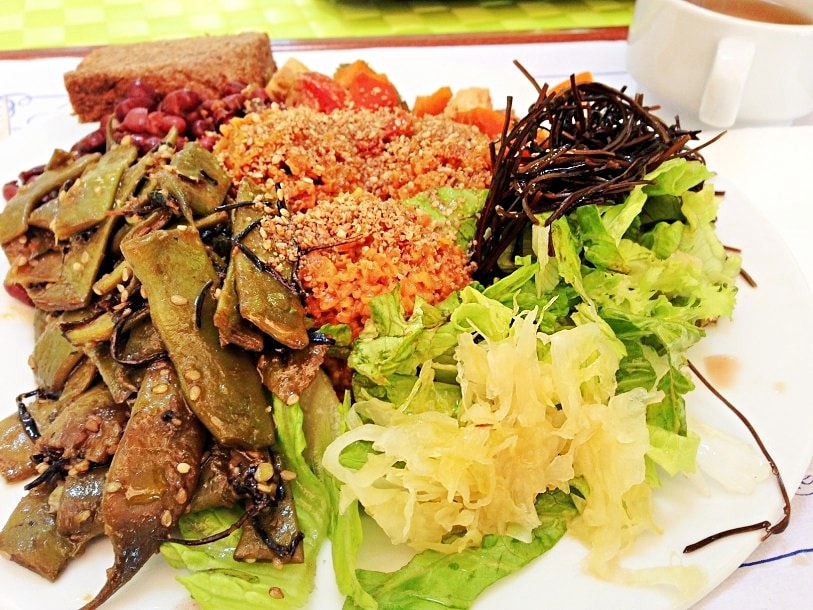 Another fantastic restaurant for vegan food in Barcelona is Macrobiotic Zen. The restaurant has a daily macrobiotic lunch menu which includes either a main course, main and dessert, or a three course meal.

I ordered the main course and received a plate piled high with coconut curry bulgur, red beans, tofu and vegetables, flat green beans, and salad with sauerkraut.  Despite feeling ravenous, I was barely able to finish my plate.

Macrobiotic Zen is a great place to visit at lunch if you’re looking for huge portions of delicious macrobiotic vegan food in Barcelona. Vegacelona is an awesome vegan food store in Barcelona that offers a wide variety of vegan substitutes, including vegan meats and vegan cheeses, catalan organic weekly vegetable boxes, vegan household cleaning products, personal care, and even vegan pet food! They really have everything a vegan traveler (or local) in Barcelona needs! The shop is centrally located near Sagrada Familia and the Joanic metro Station so getting there couldn’t be easier! 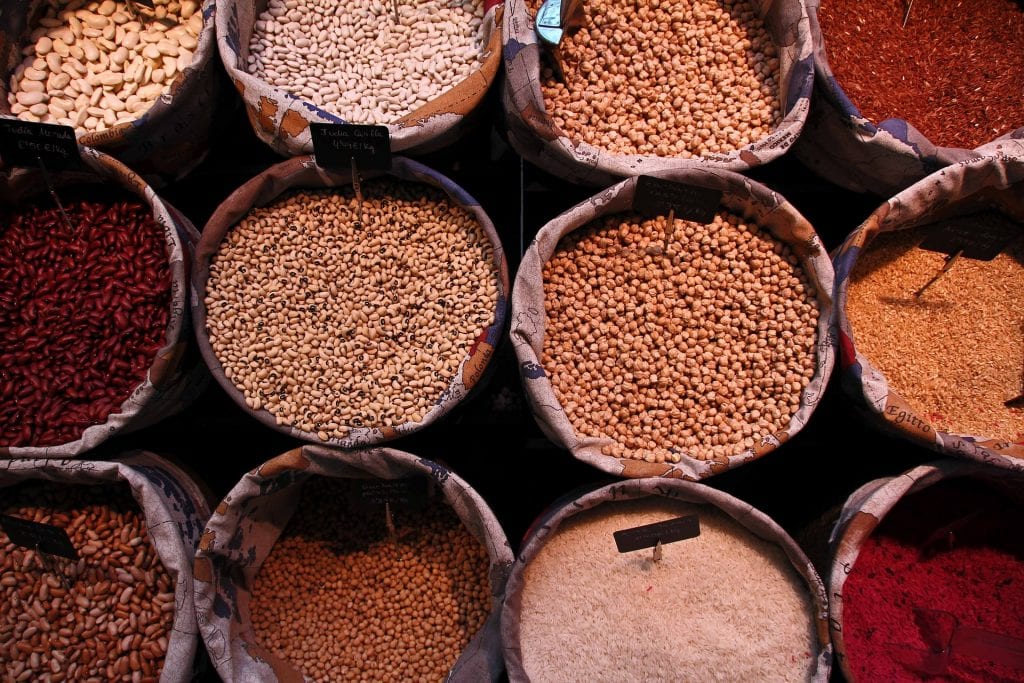 Walking around Barcelona, I discovered a number of health food stores, organic stores, and vegetarian restaurants.

One health food store in particular that stood out, and is worth a visit is El Pages d’Or near the Saint Antonio metro stop. It is a beautifully decorated shop with a myriad of options including nuts, grains, teas, organic products, and fresh produce.  The perfect place for vegan groceries in Barcelona if you have access to a kitchen during your stay. 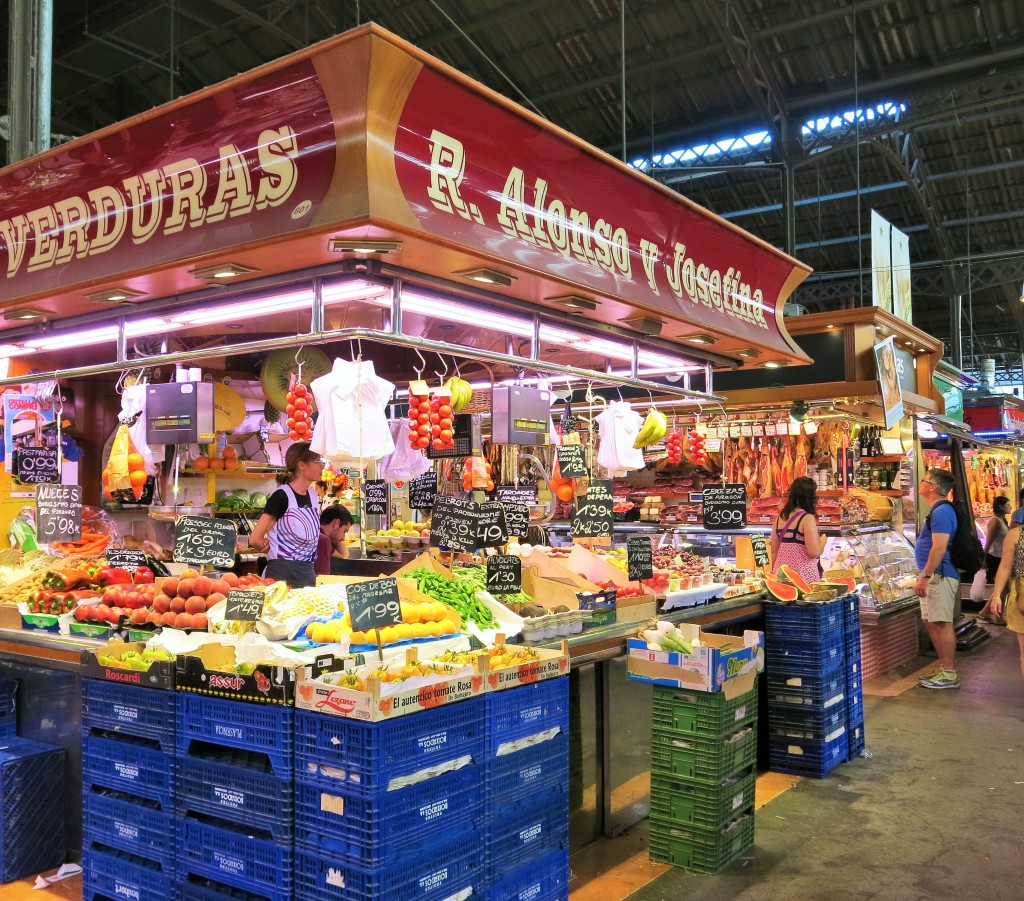 By far one of the best options for vegan grocery shopping in Barcelona is Boqueria Market.

The market is located just off of the raucous touristy strip of Las Ramblas, and has been around since 1217. Over time it has evolved from just a few tables and a meat stall to a massive market with some of the best produce on offer in Barcelona.

I visited in the summer so there was a bounty of fragrantly ripe strawberries, raspberries, and cherries that were nearly the size of golf balls. There were also stalls with an unimaginable variety of olives, nuts, candies, freshly baked breads, fresh pressed juices, and even delicious frozen fruit pops. 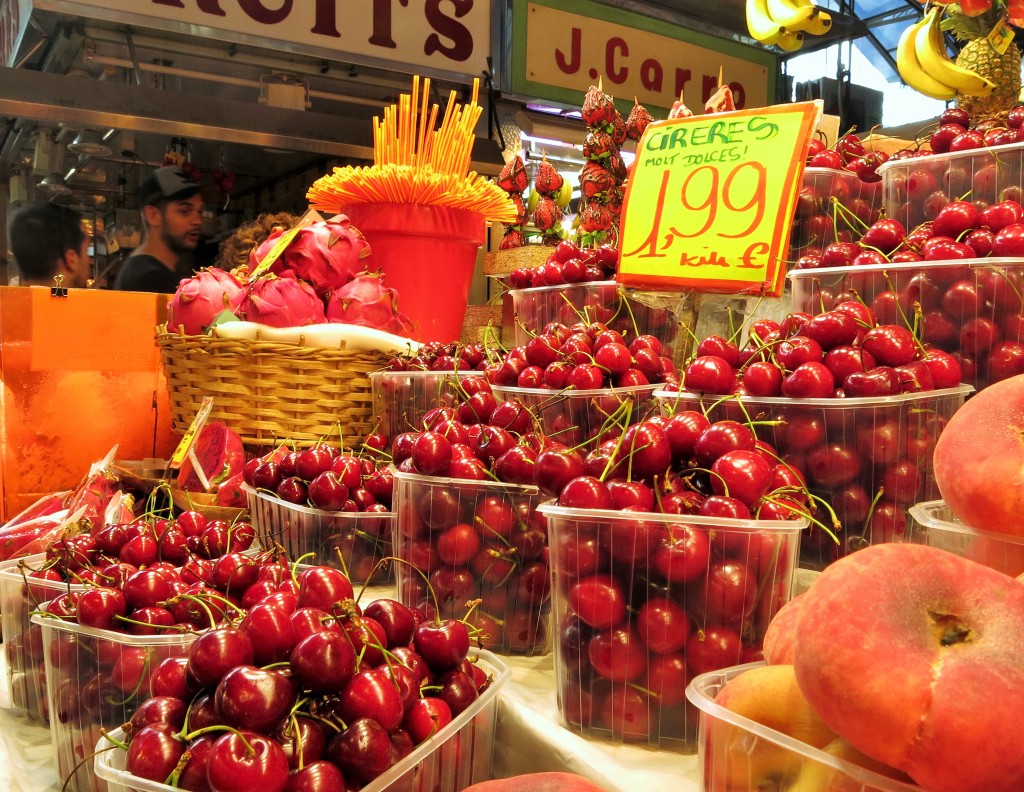 In addition to produce you can also purchase ready-made vegan meals like quinoa, couscous, and leaf salads.

The market was lively, colorful, and flavorful.  A vegan paradise…if you avoided the meat and seafood stalls. 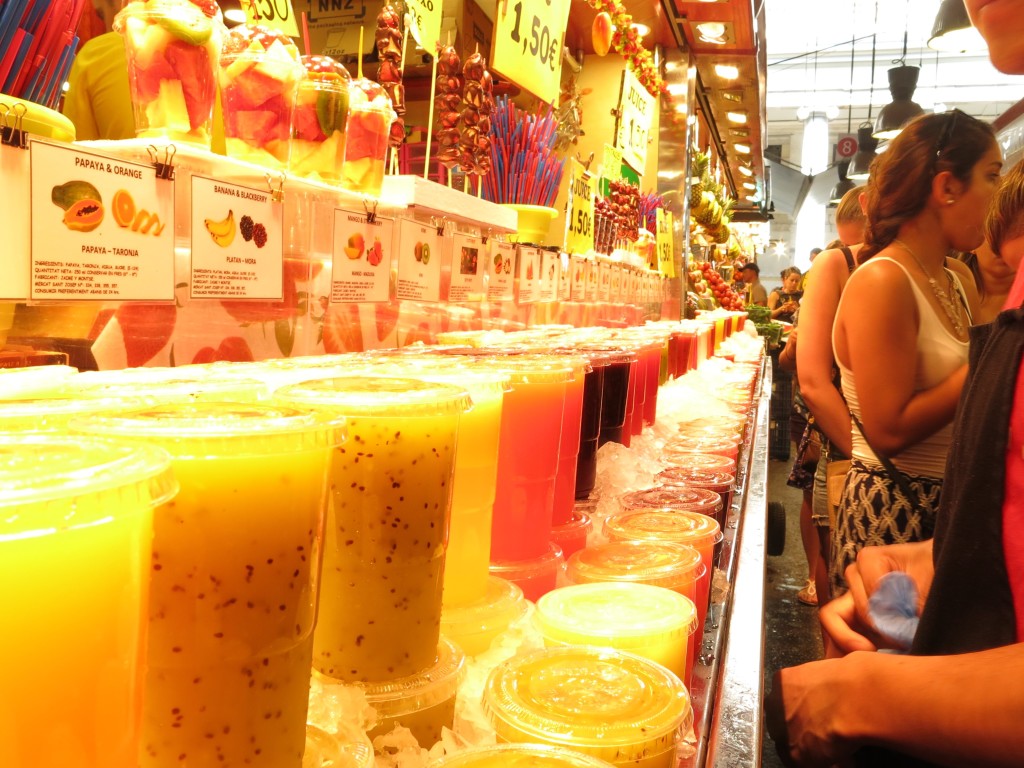 It was an excellent place to get lost in for a few hours, have lunch at, and take home plenty of things to enjoy.

As my two weeks in Barcelona came to an end, I found myself wishing I had more time to try sample more delicious vegan food.  I guess I’ll have to plan another trip to this wonderful city very soon.

Want more vegan food in Barcelona? Here is a full list of vegan restaurants in Barcelona. 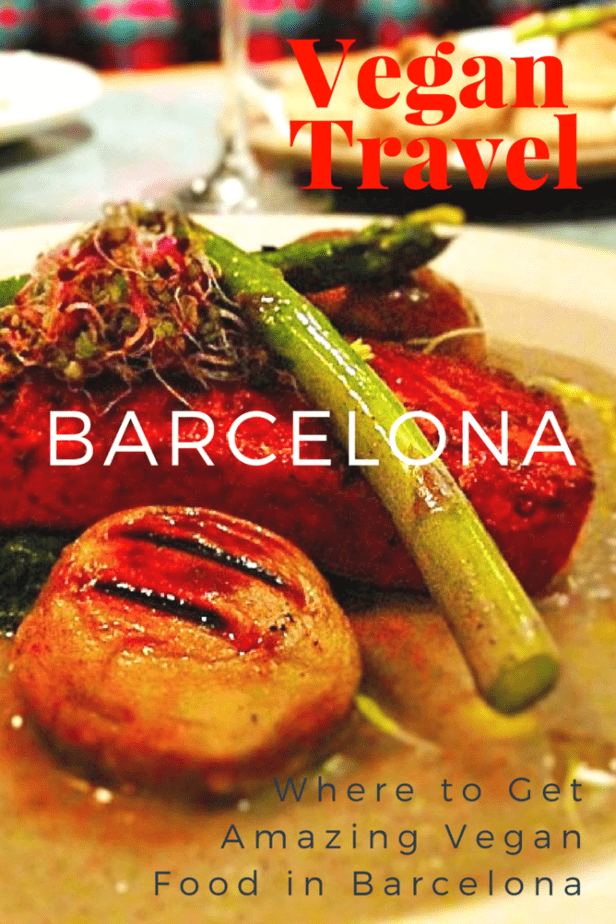