If you’re looking for a new pair of vegan work boots, then you’ve come to the right place!

This guide will get you on your way to finding the right pair of personal protective equipment (PPE) for your feet that don’t contain animal products, and stand up to the specific requirements you have in a pair of vegan work boots!

Obviously, most work boots are made using leather. So finding a pair of vegan work boots isn’t going to be a simple as going down to the local shoe store and picking up a pair. Luckily, there are options available online that are cruelty free! 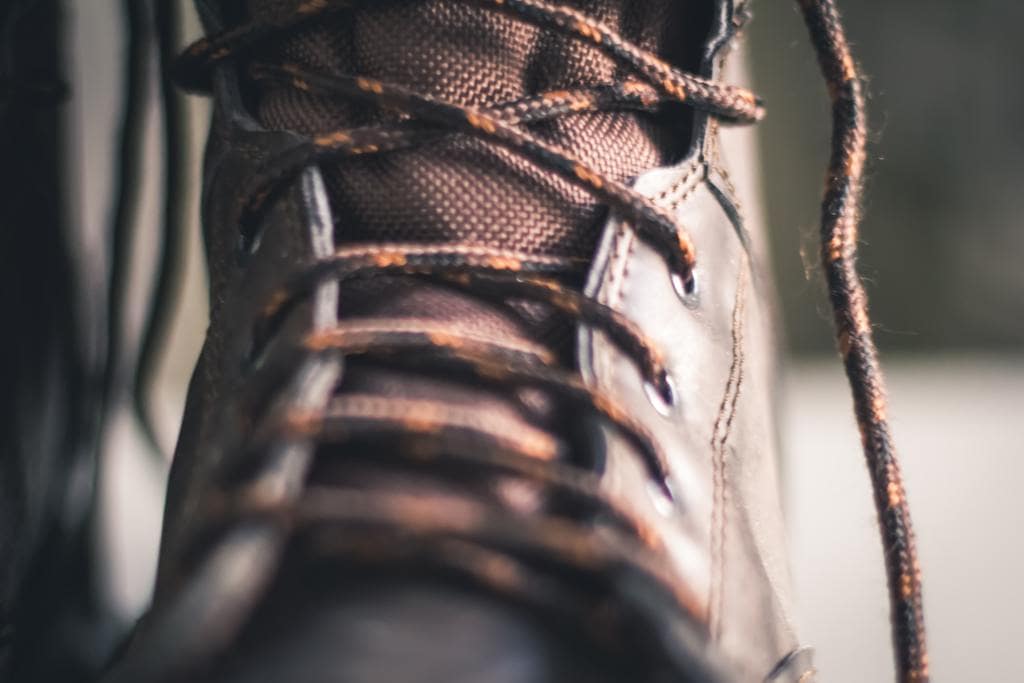 For shoes to be considered totally vegan the shouldn’t contain any traces of animal products.

Of course, most people are aware that leather isn’t vegan. You can opt for vegan leather or synthetic leather. However, leather is not the only consideration when looking for vegan work boots.

Glue is another factor. Often times the glue used to create shoes contains animal products. So, a work boot that may appear to be vegan out the outside could use a non-vegan product on the inside to hold it together.

So, unless a company’s products are certified vegan or they explicitly state that their boots are vegan friendly or that they don’t contain animal products, you can’t be certain they are 100% vegan.

That said, the selection for 100% vegan work boots isn’t huge. Of course, work boots are considered PPE and your specific safety needs will very much depend on your job and work environment. So, if you can’t find a pair that is certified vegan you might have to go with the best available option. That’s why I’ve included some options in this list that may be mostly, but not be 100%, vegan.

Obviously, if a work boot is made from leather, it won’t show up on this list. However, I am including work boots made with synthetic leather or other synthetic materials that I haven’t been able to confirm are totally vegan.

It’s up to you to choose the pair that suits your needs and ethics appropriately. The definition of veganism from the Vegan Society, after all, is to “exclude—as far as is possible and practicable—all forms of exploitation” of animals.

Here are some of the best vegan work boots on the market. 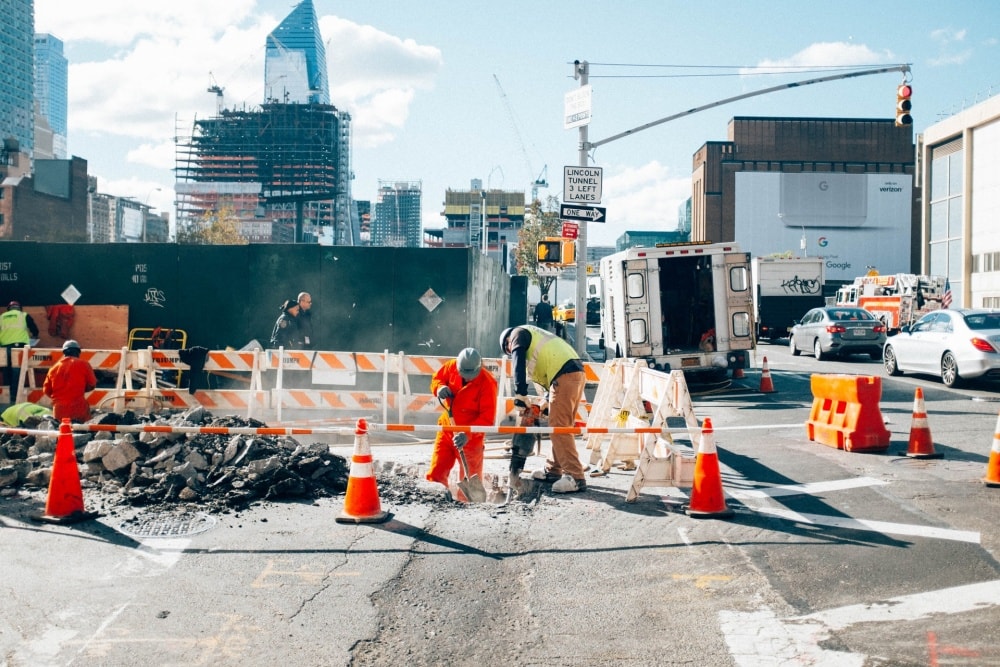 Rock Fall is a UK brand that has a number of vegan safety boots. Their boots meet a variety of safety standards including oil resistance, protective toecaps and midsoles, and low temperature, heat, chemical, and slip resistance.

The brand clearly marks their relevant boots as vegan friendly and offers some lines in smaller and larger sizes than the norm. So, it’s a great option for people with smaller or larger feet looking for vegan work boots.

Their current vegan work boots models are the Rhodium, FaraDRI, TeslaDRI, and Silt.

Their QS700 safety shoe is a vegan work boot with a nonslip oil and gasoline-resistant outsole with energy absorbing outsoles. The boot also has a 200-joule steel toe and a scratch-resistant fore front. Finally, the upper outer section is made with antistatic protection and is water resistant.

The QS700 meets protection category S3 requirements, and is certified according to EN ISO 20345:2011.

Lugz offer several pairs of non-leather work boots made from synthetic leather and synthetic nubuck. They have boots that are water resistant, slip resistant, and steel toe enforced. They also have a few pairs that protect against certain electrical hazards.

I reached out to Lugz to ask whether or not their boots are 100% vegan and they said, “The upper and sole of the footwear are 100% vegan however, we are unable to confirm the ingredients used in the glue to attach the sole and upper are free from animal products.”

STC Footwear has a sorting function on their website for work boots that are made with synthetic and vegan materials. A few of their boots include vegan in the title, so if you want to make sure you’re getting a pair of 100% vegan work boots go with those, if possible.

Their vegan safety boot is called Airseal Safety Boot MK2. It include features like oil, slip, puncture, and water-resistance. If you are looking for a boot that is 100% vegan and UK made, this is a great option.

Their shoes are perfect for warehouse and airport workers, construction workers, and people working in outdoor environments.

Ethical Wares is a UK vegan shoe company. They offer a variety of products, including two different vegan work boots.

Bogs makes several pairs of work boots with synthetic materials. However, it’s impossible to tell which are actually vegan from their website. I reached out to Bogs to see if I could get a list but they could not provide one. If you are interested in buying a pair of Bogs I’d suggest you ask their support team about a specific pair and its vegan status.

That aside, it looks like Bogs at least has several pairs of non-leather work boots on their site. So, that’s a start. Additionally, they have a section devoted to women’s work boots so that’s pretty cool too!

Bogs work boots offer a number of boots with safety features like reinforced toes that comply with ASTM International standards, slip resistant outer soles, waterproof exteriors, and chemical and oil resistant rubber. They even offer work boots that protect against cold weather up to -40°. 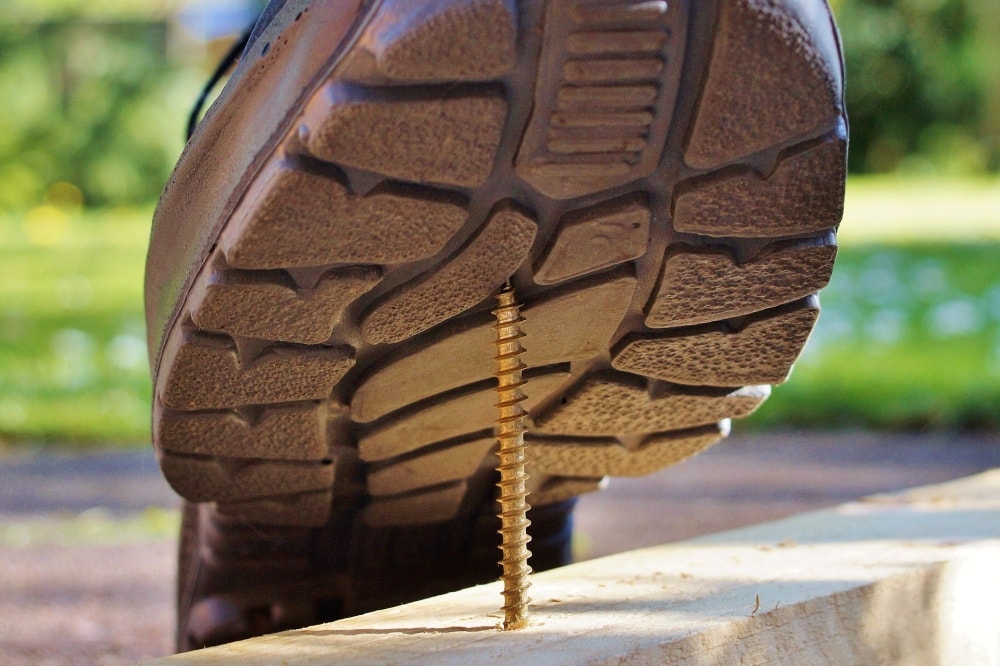 Since footwear is considered personal protective equipment it is imperative that your next pair of vegan work boots meet certain international safety regulations.

When choosing vegan work boots it’s important to consider what safety features are required for your particular job. There are various international safety standards that work boots must comply with depending on what country and industry you work in too.

Here are some important aspects to consider for your vegan work boots to qualify for most safety regulations.

Do the Vegan Work Boots Protect Against Heavy Objects?

Falling and rolling objects are a huge safety risk, especially for your feet. There are minimum requirements that footwear must provide protection against to comply with OSHA and European safety standards to comply with regulations. The standards are pretty specific too. For example, OSHA says shoes must be able to sustain a 50 lb weight, dropped from 18 inches to be labeled as I/75.

If you work in an industry, like the construction industry, where you are at risk of encountering heavy falling or rolling objects make sure the work boots you choose are certified accordingly.

Almost anyone with a job that requires being on your feet needs a pair of slip-resistant shoes. Most, if not all, of the boots in this article have sturdy, slip-resistant soles. That said, make sure this is an aspect you consider before investing in a pair of vegan work boots.

Do they Protect Against Corrosive or Poisonous Materials?

If your job requires you to encounter oil or corrosive materials your work boot has to be able to prevent you from coming in contact with these harmful liquids for obvious reasons.

Do they Protect Against Static Electricity That Could Cause an Explosion?

In the right environment, static electricity can cause huge safety issues, including fires and explosions. Certain safety boots are made to “ground” the wearer and prevent static electricity and sparks. Some safety boots can also be made to prevent electrical shock to the wearer in the event that they steps on live electrical circuits or conductors.

Do the Vegan Work Boots Protect Against Sharp Objects?

Of course, puncture resistant or puncture proof work boots are imperative for anyone that works in an environment where sharp objects end up in their walking path. Check the safety classification for the soles of whatever vegan work boots you are considering if this is a hazard you may encounter.

Do they Protect against Molten Metal?

For anyone who works with incredibly hot materials, such as in the metal or roofing industry, you will need to ensure that your vegan work boots can stand up to this hazard. Luckily, plenty of brands offer this feature!

Thank You! This was very helpful! Hopefully my work will let me order one of these instead of the leather they usually use

Hey Rob, I'm so happy to hear that. Good luck with your company...hopefully they will let you order a pair. :)