If you’re on the hunt for a vegan gnocchi recipe that doesn’t include egg then you’ve come to the right place! This easy recipe will have you sinking into a big bowl of vegan gnocchi in no time. And trust me, you won’t even know it doesn’t have egg in it!

If you’ve never had the pleasure of popping these fluffy little pillows of pleasure into your mouth, you are missing out. Gnocchi has been an oft eaten dish for me since I first moved to New York City and found myself surrounded by thousands of Italian restaurants.

From the very first bite, it fueled indecision. See, any time I dined at an Italian restaurant, pasta was an inevitable choice. However, once gnocchi was thrown into the mix I had some serious thinking to do. Opt for fluffy potato pillows, or al dente piles of pasta? It’s a difficult choice to make.

In culinary school I learned how to make gnocchi, and I was shocked by how easy it was to make! No surprise, it’s been a favorite dish to make at home since then. Though, I won’t lie. Buying the pre-made gnocchi is great for anyone looking to get dinner on the table fast. I’ve even smuggled a kilo of fresh vegan gnocchi back home from Naples in my suitcase!

However, if you enjoy cooking vegan recipes, want to avoid preservatives, and want to guarantee your gnocchi is 100% vegan gnocchi, making your own is a great option. Plus, it can be frozen. So, make a big batch of this vegan gnocchi recipe to have on hand any time the craving hits!

Let’s cover some basics on gnocchi, and vegan gnocchi first.

What is Vegan Gnocchi? 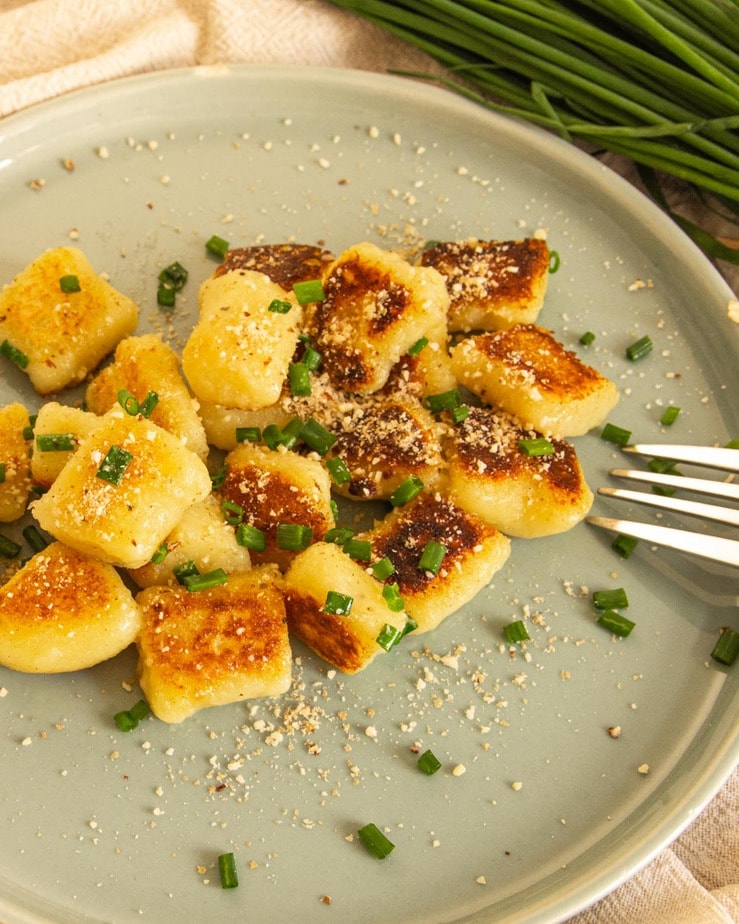 Gnocchi is an Italian dumpling made with potatoes, flour, and salt. Sometimes egg yolks are added to gnocchi dough to prevent the dough from separating while cooking, but it’s a totally unnecessary ingredient.

If you think that gnocchi dough should include egg yolk to be considered authentic, you’d be wrong. In fact, it’s as common for Italians to make gnocchi without yolks as it is to make it with them.

So yes, as with pasta, gnocchi can and is often made totally vegan. Yup, vegan gnocchi it’s authentic!

Short answer – the most starchy variety you can find. 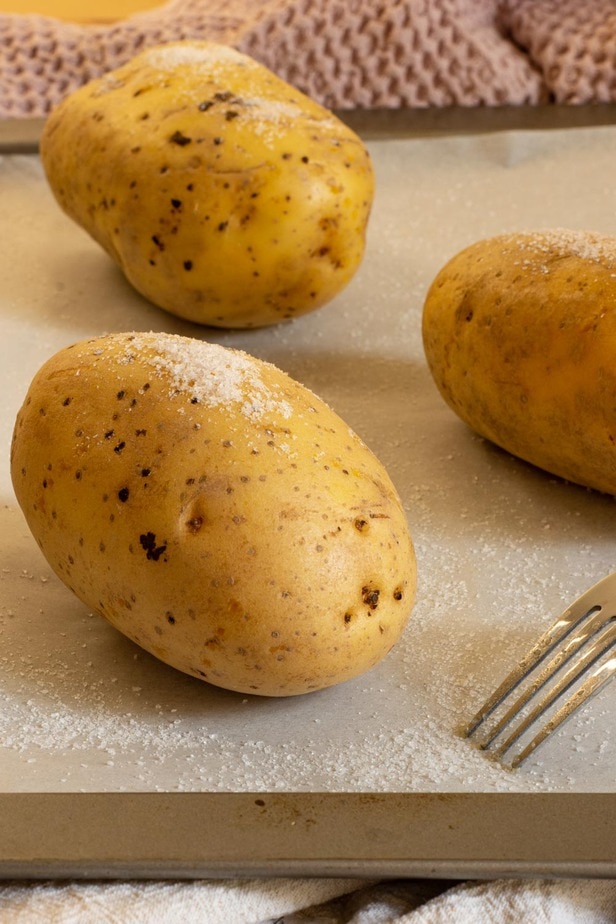 There are two secrets to creating a fluffy, non-gummy gnocchi. Keep the moisture low and pamper it. 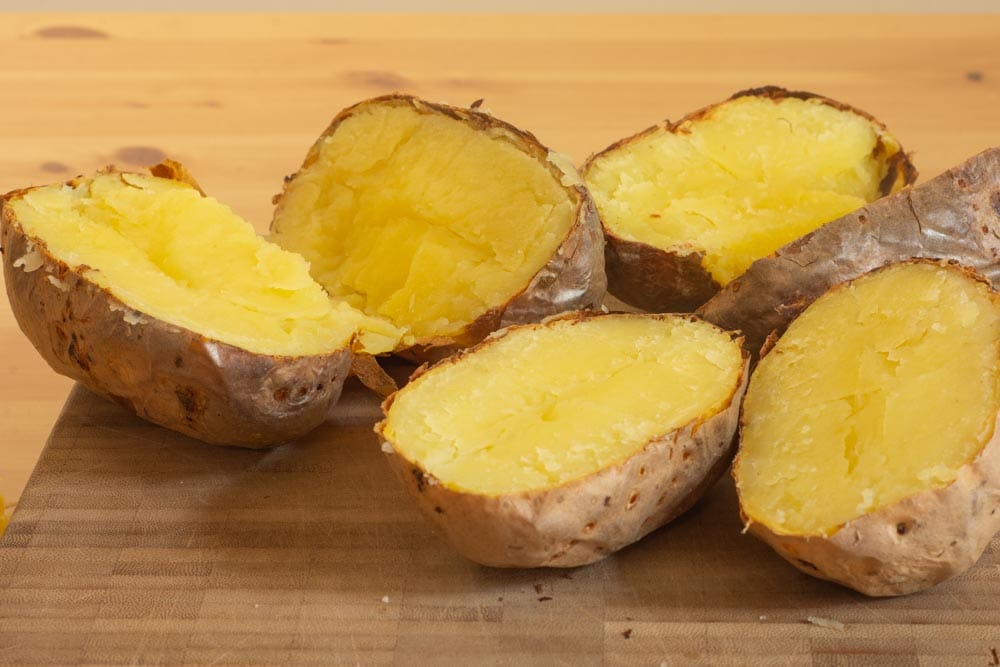 The first secret to a fluffy vegan gnocchi is dryness. Yeah, I know that sounds weird, but it’s true.

The more moisture your potatoes have, the more flour you’ll have to add to your dough. Which results in a heaver and more dense gnocchi. Vegan gnocchi should be light and fluffy!

So, opt to bake your potatoes rather than boil them. Yes, it will take more time but it’s totally worth it. Plus, you can sprinkle a bit of salt on the potatoes before popping them into the oven to draw about a bit more moisture.

Also, make sure you slice your potatoes in half as soon as they come out of the oven to let steam escape. Finally, scoop the flesh out while it’s still hot. Add it to a potato ricer, mill, or sieve and spread out onto a work bench asap. This too will let more steam and moisture escape. 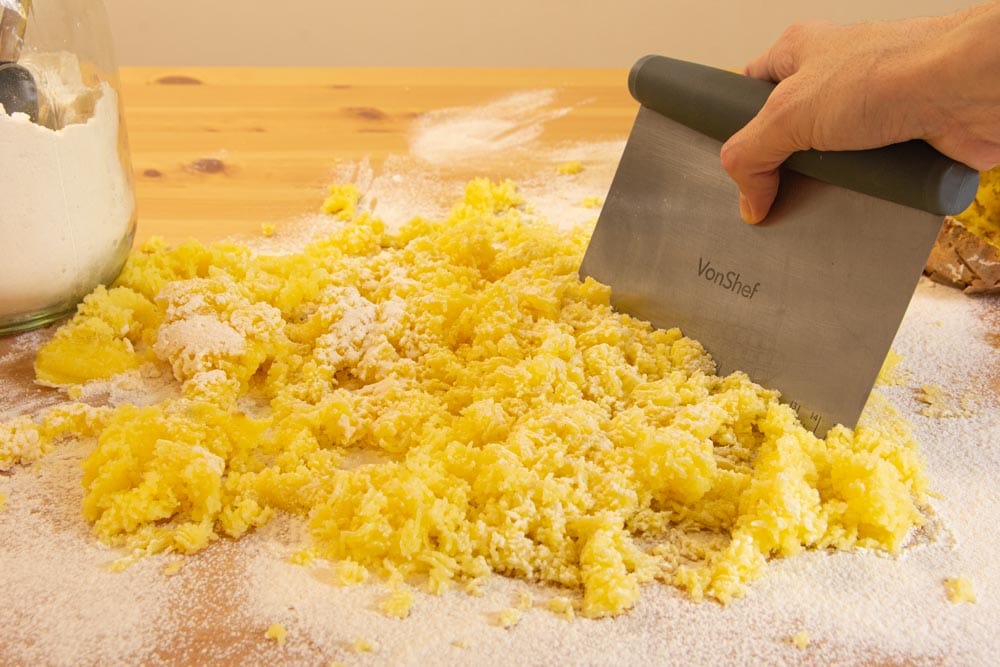 The second secret to non-gummy vegan gnocchi dough is –  don’t overwork it.

The more you fold, press, and knead (don’t do this!!) your dough, the more gummy it will get. This will result in a heaver gnocchi, which is not what you want.

So, handle the dough with kid gloves. Cut the flour in with a bench scraper or pastry knife instead of kneading it. Gently form and shape the dough with care. Say a prayer over it. Whisper sweet nothings to it, or sing it a lullaby. Basically, treat it like a baby and it’ll be more likely to turn out tender.

Do I Need a Potato Ricer or Mill for this Vegan Gnocchi? 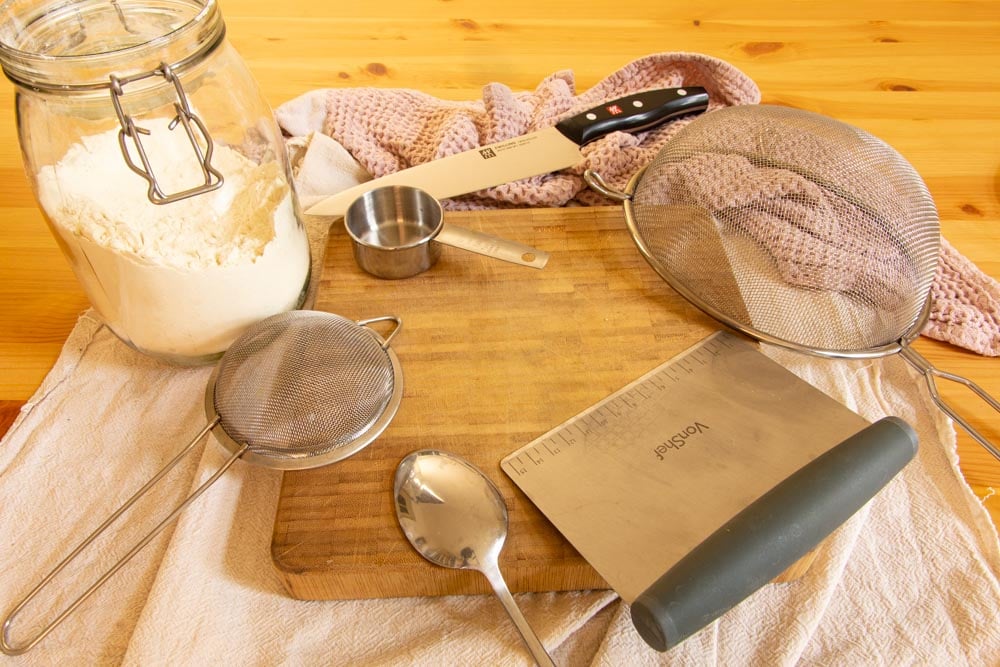 One of the key steps in making vegan gnocchi is mashing the baked potato flesh. Yes, a potato ricer or mill will get the job done quickly and maybe a little better, but you can make gnocchi even if you don’t have these tools. You can use a sieve to press the flesh through for the same result, or you can even use a fork or potato masher to mash it into a pulp.

Just be sure not to over fork it. That’s not good. Get in and get out, that’s the trick. 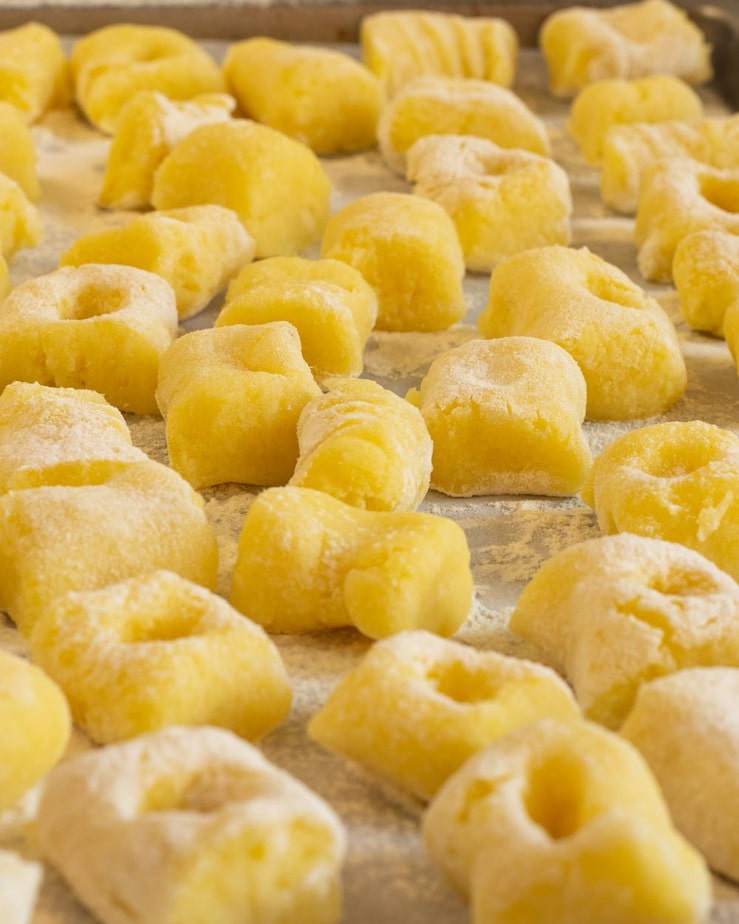 As the debate rages on – to ridge or not to ridge – feel free to make the decision for yourself.

The reason you most often see gnocchi with ridges is because, just like with pasta, they give sauce something to hold on to. That said, a dimple will do the trick too if you don’t have a gnocchi board or don’t feel like spending the time it takes to ridge each individual gnocchi.

Additionally, feel free to go au natural with your gnocchi and leave it as is. Even a smooth and dimple-less gnocchi tastes amazing. 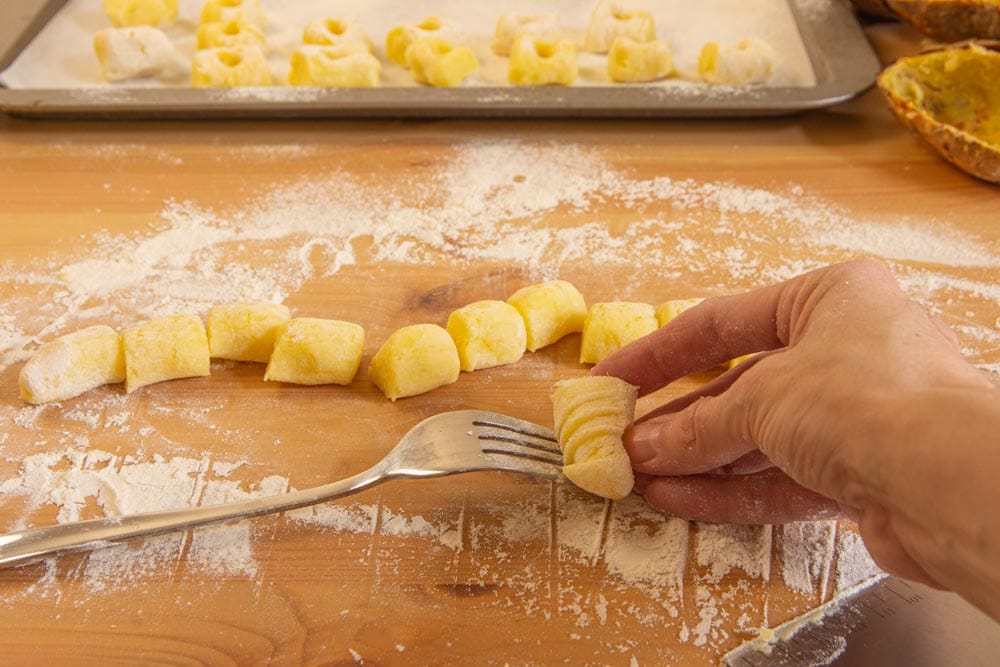 If you want to add ridges to your gnocchi all you need is a fork. Just roll the gnocchi down the tines of a fork with slight pressure. Easy-peasy.

To Pan Fry or Not Pan Fry, That is the Question! 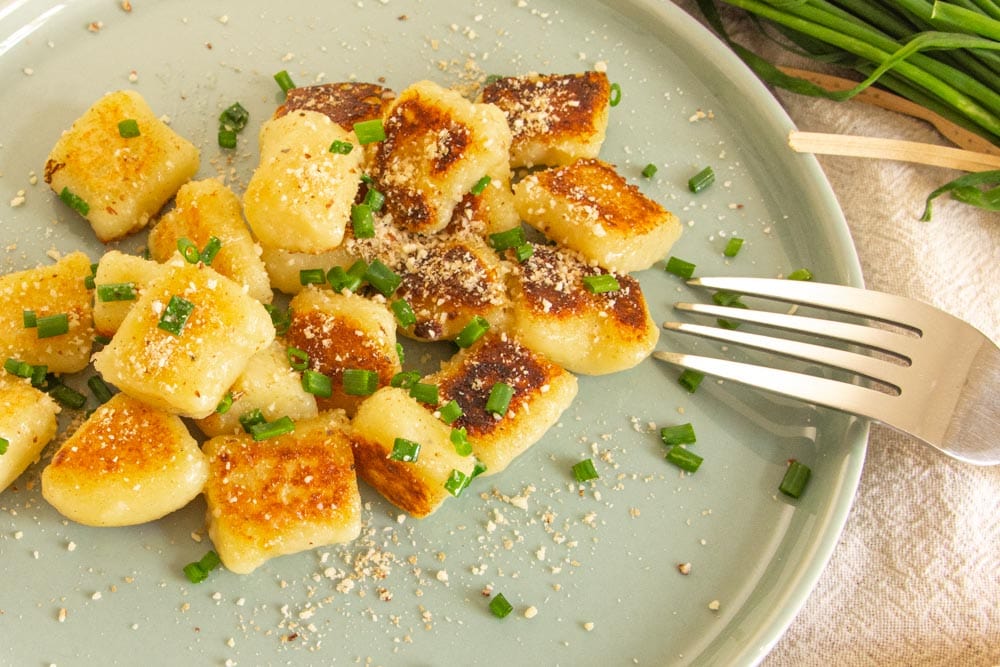 For me, there is a clear answer. But, again it’s up to you.

I like contrasting textures so I always pan fry my gnocchi after boiling them. But if you are anti-texture (weird0!), feel free to eat them straight out of the pot and coated em in whatever you desire.

Speaking of coating… What is the proper way to serve vegan gnocchi?

If you want a simple but incredibly flavored dish, try serving this vegan gnocchi tossed with fresh sage leaves that have been fried in vegan butter. Sprinkle with a little vegan parmesan and voila…heaven! 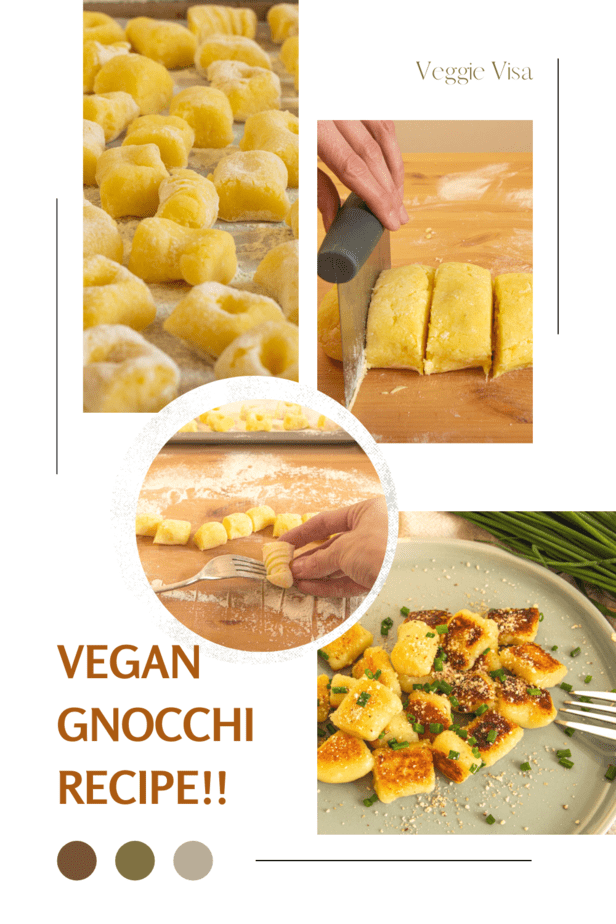 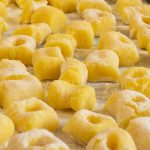 This homemade vegan gnocchi recipe can be frozen! Just pop the raw gnocchi into the freezer on a floured baking tray. Make sure there is space between each piece to prevent sticking. After about 30 minutes to an hour remove the gnocchi from the tray and add them to a freezer bag or container and return to the freezer.  When you're ready to use them, cook as instructed above. They will take about an addition 30 seconds to a minute more to float than fresh gnocchi.
Click here to cancel reply.