Tattoos have become a huge part of modern culture. They can be a great way to express your individuality and creativity. It’s not uncommon to see people with full arm sleeves or even neck tattoos these days. With this trend and veganism on the rise, vegan tattoos are in high demand.

But how does veganism come into play? Aren’t tattoos vegan by default? Sadly, the answer is no.

From the inks, to the tools, to the cleaning products, the tattoo you’ve painfully sat through may involve animal by-products. Unless you make sure you get vegan tattoos, you might be stuck with a sore and permanent reminder that your new ink isn’t 100% cruelty-free.

Don’t worry though – this guide has you covered! From the vegan inks, tattoo artists, and fully vegan shops, we’ll make sure your next ink appointment is ethical. We can’t guarantee it will be painless, but at least the animals will be spared from harm.

Vegan Tattoos – How & Where to Get a Cruelty-Free Tattoo! It’s sometimes impossible to tell by just looking at a product if it’s vegan. Not all the components of a tattoo product like ink or soap are always listed. Therefore, it’s important to remember name brands and verify that they’re vegan by doing a little research.

Most tattoo artists are happy to confirm the types of products they use. Some even know which inks they use are or aren’t vegan.

If you want to get a vegan tattoo make sure to ask about the products they use before booking your next appointment. Don’t expect to rock up the day of and be able to sort out these details.

Remember, a tattoo is for life. So, it’s essential to ask all the appropriate questions before you commit.

Many tattoo inks these days are vegan, but not all brands are. According to PETA, some inks may contain glycerin, bone char, gelatin, or shellac. These are all ingredients derived from animal fat, animal bones, or ground up beetles.

These ingredients can act as stabilizers or to increase the pigmentation of the ink. So, if they’re in your ink your tattoo artist uses, you’re not getting a vegan tattoo.

It’s imperative to recognize and remember which tattoo inks are vegan. Some of the more popular brands are vegan by default.

These include Eternal, Crazyhorse, SkinCandy, and Dermaglo. You can request that you tattoo artists use these vegan ink brands, and if they’re not available, find a studio that does offer them.

Transfer paper – or stencil paper – is what is applied to the skin to put the base design for the artist to follow with a needle. This paper is not always vegan, however. It may contain lanolin, which is a moisturizing ingredient made from sheep’s wool.

Again, ask your artist what the brand name of the stencil paper is. The only common certified vegan tattoo transfer paper on the market is Spirit Thermal Tattoo Transfer Paper by ReproFX. It uses vegetable waxes instead of lanolin. If you want to be extra careful, choose an all-vegan tattoo studio to ensure this paper is used.

Another option is to bring your own transfer paper or ask your tattoo artist to freehand the tattoo. Thus, eliminating the need for transfer paper altogether. Obviously, this can’t be done with every design but it’s worth asking!

A common step in preparing the body for a tattoo is gently shaving the area where the tattoo will be. This removes any hairs and makes the area smooth for easy application.

To avoid this, bring your own vegan razor or chose an all vegan tattoo studio.

Some vegan razor brands include Every Man Jack, Preserve, or Personna. Choose one of these for a vegan tattoo.

Soap is used during the tattooing process to clean the area. Again, asking your tattoo artist which brand of soap they use is quite simple.

Some recommended vegan soap brands include Dr Bronners, Tom’s of Maine, and The Honest Co. It’s important to get a soap that’s gentle for cleansing, and these companies use mild and simple ingredients.

Soaps for a Vegan Tattoo 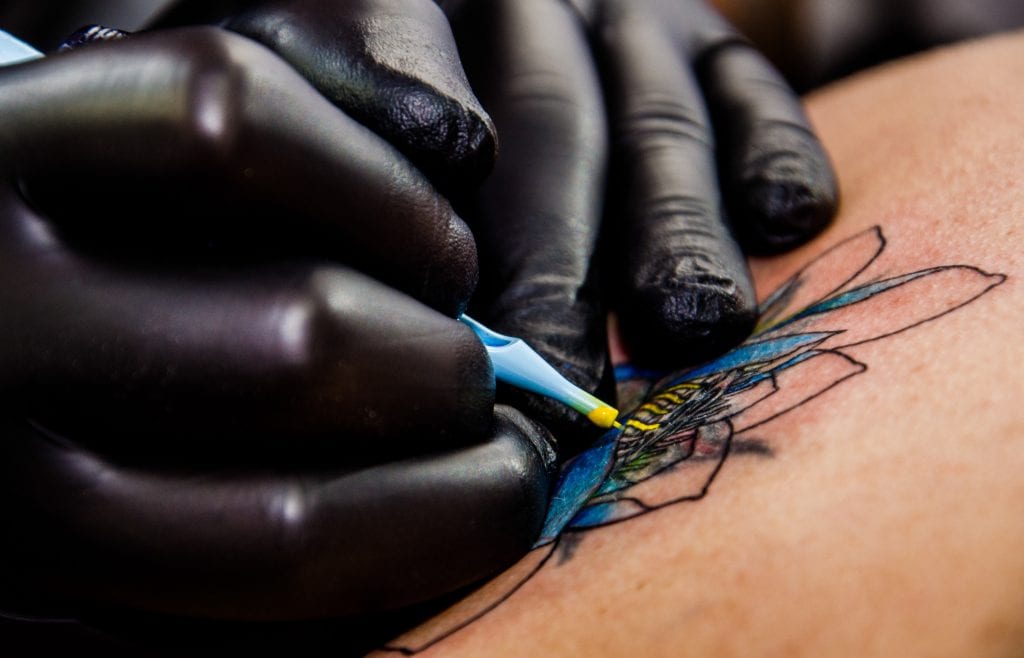 Congrats on your vegan tattoo!

After getting a vegan tattoo, you’ll need to clean and moisturize the area for a period of time until the tattoo heals. Luckily, you have full control over what products you use to do this.

Tattoo artists will tell you exactly how to care for your tattoo and usually recommend or sell aftercare products. It’s crucial to check the ingredients of these products.

Some may contain lanolin or beeswax. In addition, these products may not be cruelty-free. Guaranteeing there’s a certified cruelty-free logo like Leaping Bunny is the best way to go.

I’ve gotten all my tattoos as a vegan, so I can highly recommend Dr. Bronner’s Pure-Castile Liquid Soap in the Baby Unscented variety for cleaning purposes. This product is certified vegan and cruelty-free. It has no added fragrance, is organic, and uses fair-trade ingredients. Made from simple ingredients like coconut oil, olive oil, and hemp oil, it’s gentle on the skin and won’t irritate your new vegan tattoo. It’s also sold in a small travel-sized bottle which is handy if your vegan tattoo isn’t large.

For moisturizing balms, my favorites are Elbow Grease from Lush Cosmetics and Vegan Ink Balm from Wild Rose. Both of these are cruelty-free and use natural, soothing ingredients. These products are also excellent value for money!

I’ve used only one small container throughout the aftercare of several tattoos. You can even return your empty Lush container back to a Lush shop for recycling. 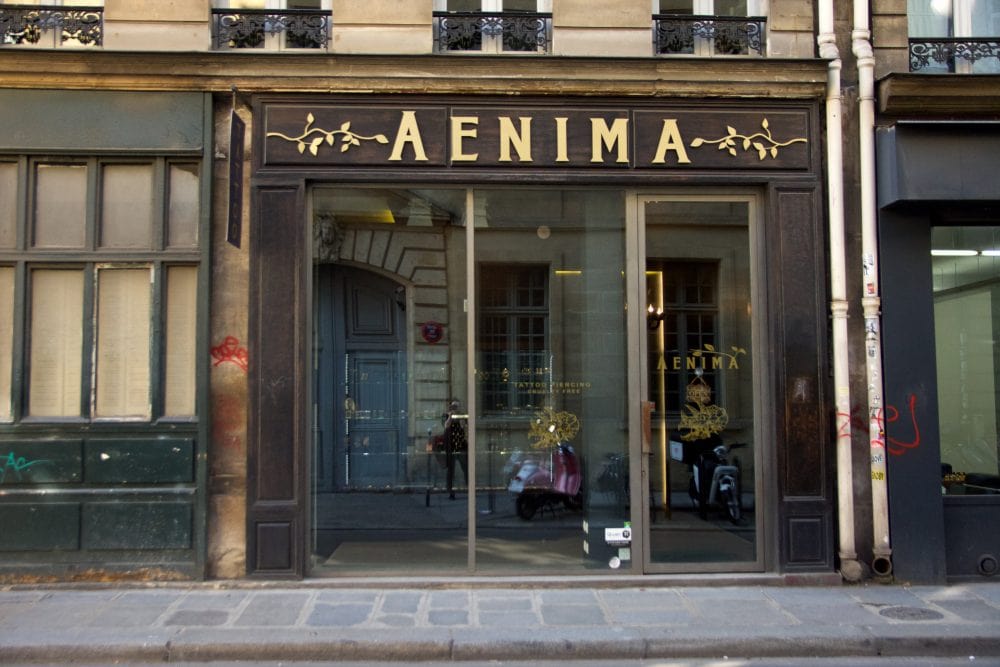 If you’d like to just relax and not have to double-check every product used by your tattoo artist, you should definitely visit an all vegan tattoo studio.

The following places are completely vegan, from the ink, to the materials, to the aftercare. You won’t need to worry about a thing!

Aenima is the perfect shop for vegan tattoos and piercings in Paris. The shop is 100% vegan, and the staff are incredibly friendly.

I got a nose piercing here and can confirm that the shop is incredibly sanitary, beautiful, and professional. Plus, it’s right around the corner from one of the Vegan Hank Burger restaurants.

Fifth Dimension tattoo shop is located in the heart of artsy Brick Lane. It boasts being a “haven” for fully vegan tattoos and piercings. They feature guest artists from all over the world and are happy to customize any tattoo that you’re interested in.

More than just a tattoo studio, Gristle also functions as an art gallery, showcasing the work of artists from around the world. In addition, they host local animal rescue fundraisers and pet adoption events. Everything in the tattoo process is 100% vegan and the designs they offer are incredible.

As one of the pioneers in vegan tattooing, Scapegoat Tattoo is part of Portland’s first and only vegan strip mall. Next to this studio, you’ll find a vegan grocery store, a vegan bakery, and a vegan clothing store. The studio uses all-vegan products and supports local businesses as much as possible. I personally got a vegan tattoo here as a walk-in customer. They did an amazing job!

Down to Earth Tattoos – Melbourne, Australia

Melbourne really is the vegan capital of Australia, so why not get a vegan tattoo if you’re in town? This studio is completely vegan from the stencil paper to the aftercare. Down to Earth Tattoos specialize in custom designs in any style you wish. Their animal designs are particularly charming. A very useful website to check out is Vegan Tattoo Studios. This serves as a database for vegan tattoo studios and artists around the world. You can easily find one that’s closest to you!

If there isn’t an all-vegan tattoo studio in your area, you shouldn’t worry too much. Many tattoo studios are willing and able to cater to vegan clients. Vegan tattooing is becoming more and more popular, and any well-established studio should be able to accommodate your request. It may take a little more time and effort to arrange, but it’s totally worth it.

Tattoo artists themselves have garnered huge followings on social media, becoming celebrities themselves. These days, getting a tattoo is not only about the design itself, but also about who designed it.

Several popular and noteworthy artists follow a vegan lifestyle, which may be something you’re interested in seeking out in an artist. Some promote animal welfare and vegan activism through their vegan tattoo designs. Usually vegan tattoo artists enjoy creating animal-related designs too!

Perhaps the most famous vegan tattoo artist, Kat Von D became a celebrity after being featured on the TV show LA Ink. Her shop is the trendy High Voltage Tattoo in LA. She also has her own line of vegan makeup, some of which is tattoo inspired.

Based in Sheffield, UK, Rachael Rose’s style is predominantly colorful designs featuring nature and animals. With a twenty thousand strong Instagram following, Rachael is in high demand for vegan tattoos in the UK.

Operating out of a private studio in Vancouver, Canada, Eckel has been a highly sought vegan artists on the tattoo scene for a while. Preferring designs that feature wolves, mythology creatures, and birds, Eckel’s huge social media fan base proves that his vegan tattoos are in high demand.

Do You Have Any Vegan Tattoos?

Vegan tattoos are on the rise and are not difficult to get. It might require a little bit more research and planning, but the rewards are worth it. Having a completely cruelty-free, ethical piece of body art that you can enjoy lifelong feels great.

Do you have any tattoos? Or are you thinking about getting one in the future? Do you have any particular tips for getting a vegan tattoo? Let us know in the comments below! Hopefully this guide will help you navigate your next vegan tattoo experience with ease.