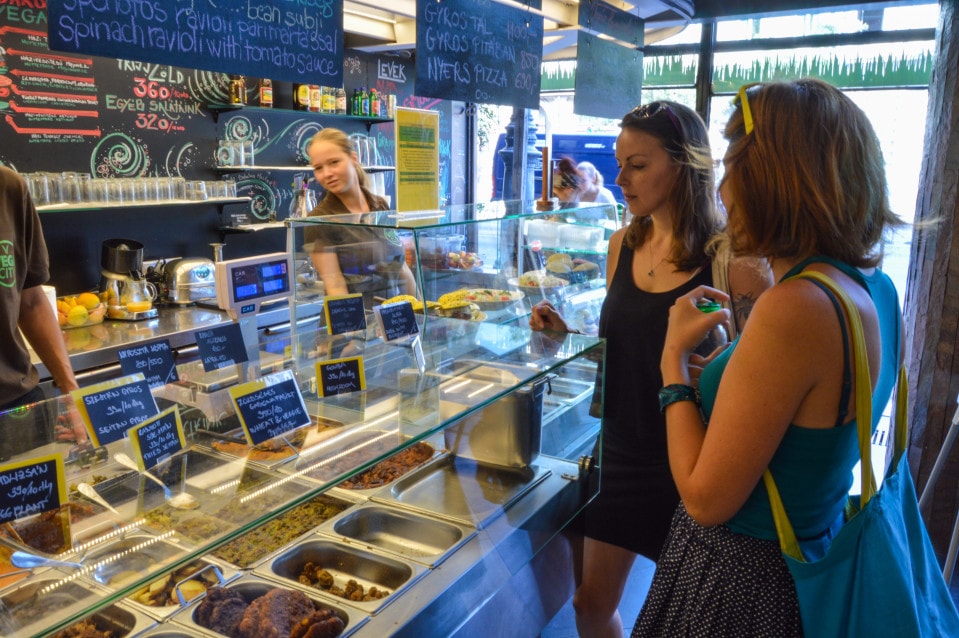 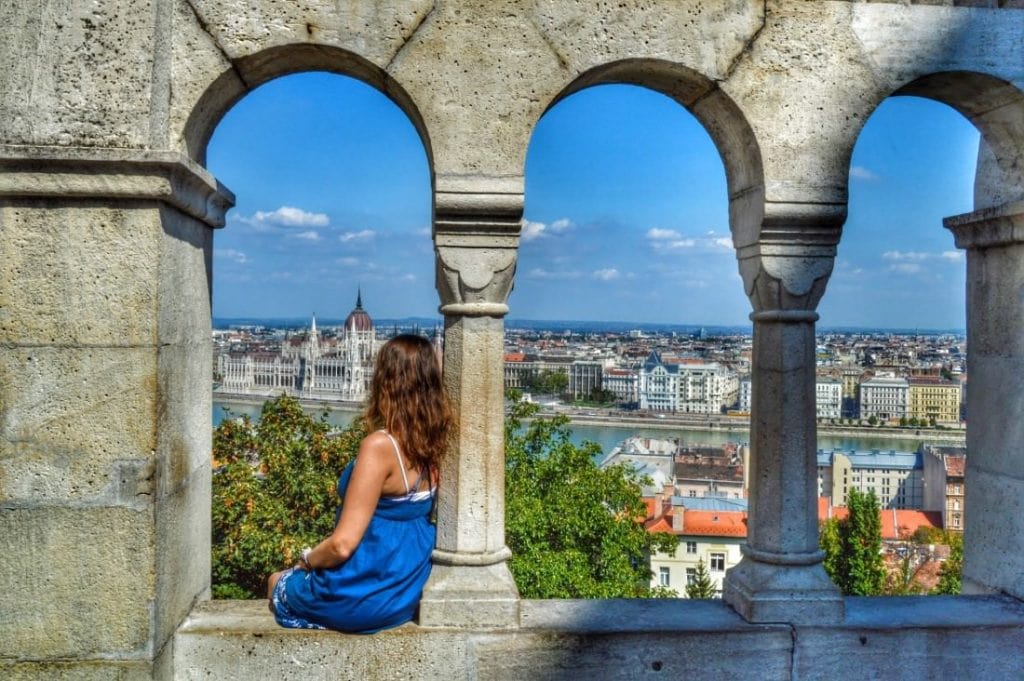 Vegan Budapest Food Tour – Try Some of the Best Vegan Restaurants in Budapest in Just a Few Hours!

I don’t usually take or enjoy organized tours. Walking around for hours with a group of strangers while being lectured by a guide isn’t my idea of a good time. Then why did I end up taking a vegan food tour in Budapest? Because I was only visiting Hungary’s capital for a few days, wanted to eat as much vegan food as possible, and didn’t have a lot of time to do research on vegan restaurants in Budapest.

Vegan food tours aren’t that easy to find, despite the fact that there are loads of health food stores and vegan restaurants in Budapest. So, I was thrilled when Judit at Budapest 101, told me she could organize a strictly vegan private food tour for me.

So, one sunny afternoon Judit and I set off on foot to explore what vegan delights Budapest has to offer. It was exactly the kind of tour I was looking for. It felt more like exploring the city with a local friend than a guide. Judit’s company is fairly new but she has been a guide for years and knows the city inside and out. Although this was her first fully vegan tour, she did an exceptional job showing me not only great restaurants but also incredible coffee shops, health food stores, a local farmers market, a candy store with historic roots, and a beautiful ice cream shop.

Here are all of the great spots I visited on my Vegan Budapest Food Tour. 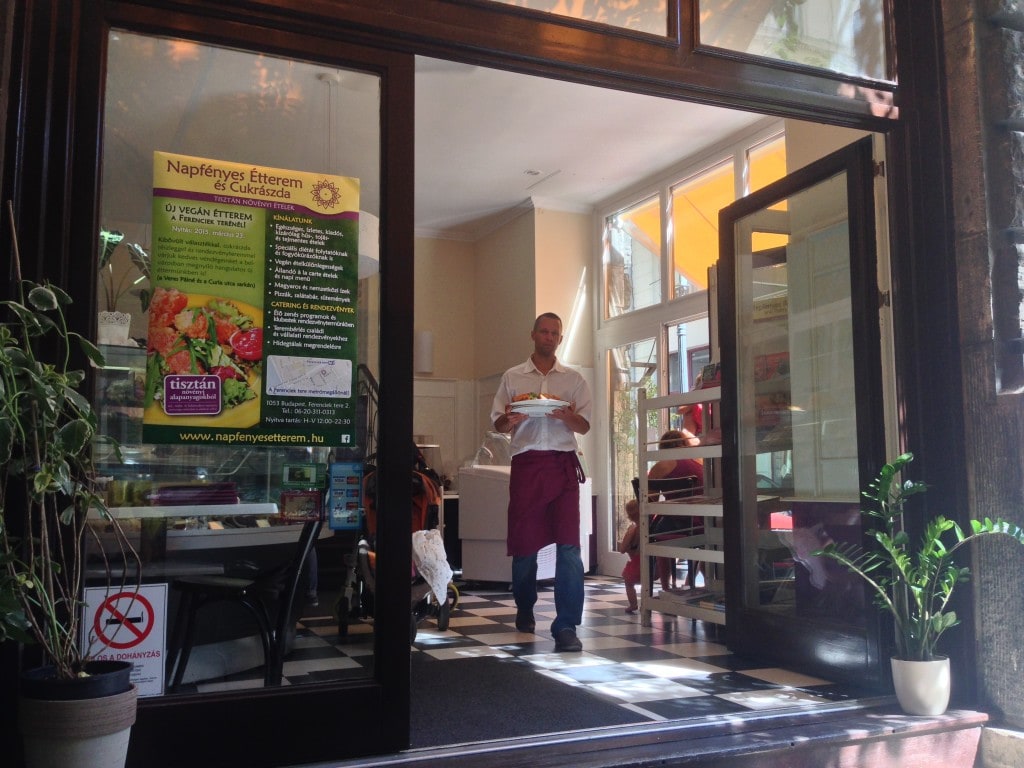 Napfényes Étterem is a superb vegan restaurant in Budapest. I couldn’t get enough of this place and went back three or four times after my vegan tour. 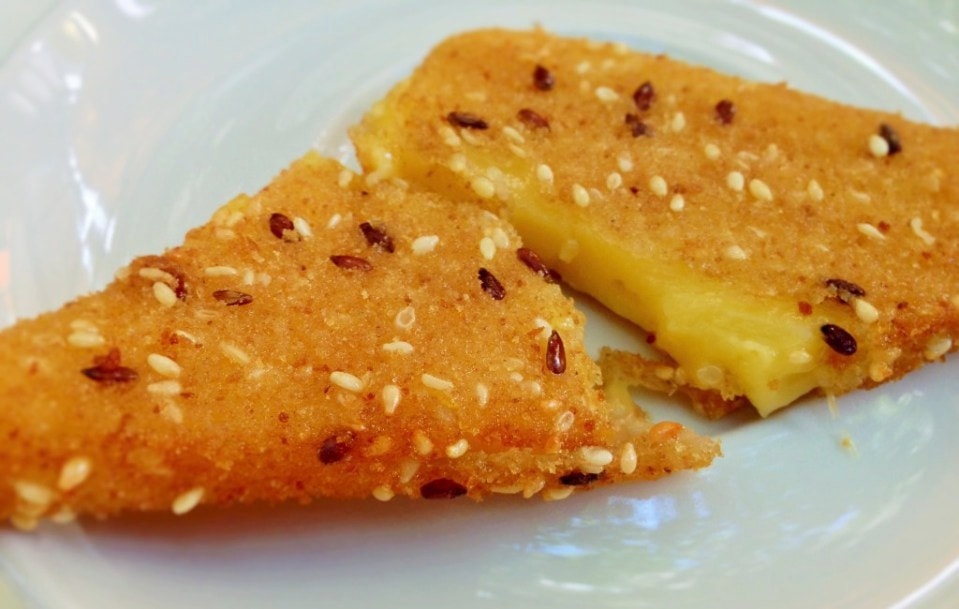 What really made me a fan is that they have vegan fried cheese on the menu! It was everything fried cheese should be, ooey-gooey, melty, crunchy, creamy, and salty. I had it every time I went to the restaurant and salivate just thinking of it. Seriously, my mouth just watered.

Napfényes Étterem has a large standard menu and a daily menu to choose from. This Sauteed Seitan with Savory Donuts in Carrot Soup isn’t the most appealing dish to look at but my god it is so good! 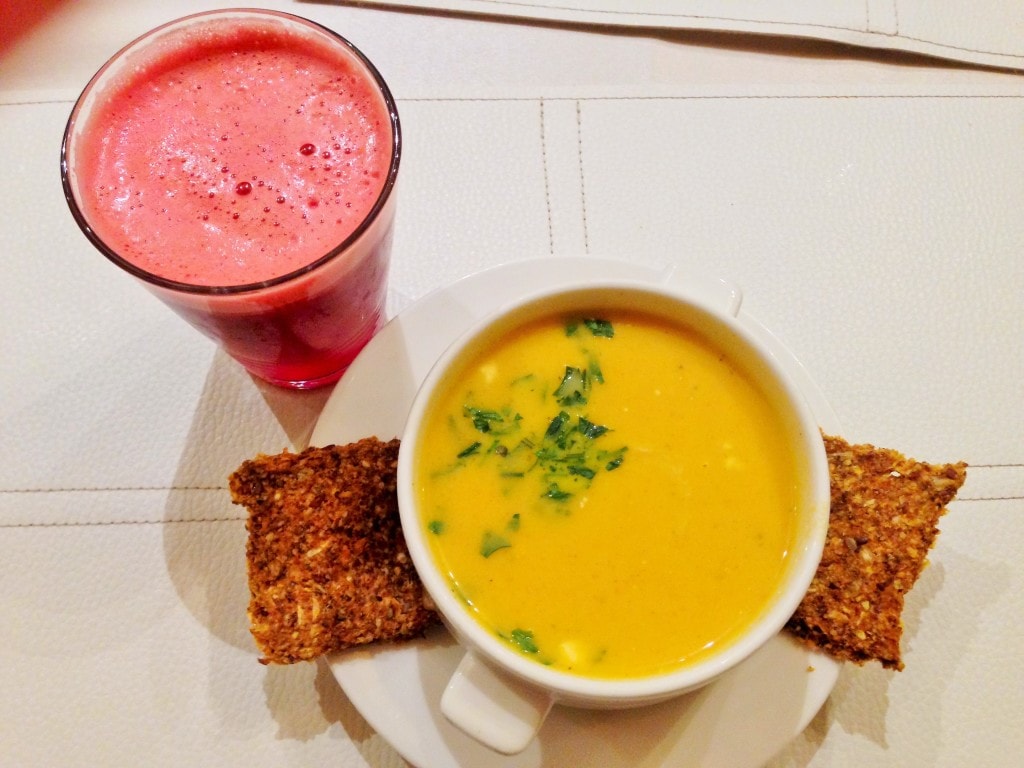 On one of my visits (so I could save room for that cheese) I tried the carrot soup with raw crackers, and a fresh apple and beetroot juice. It hit the spot and left enough room to enjoy dessert. 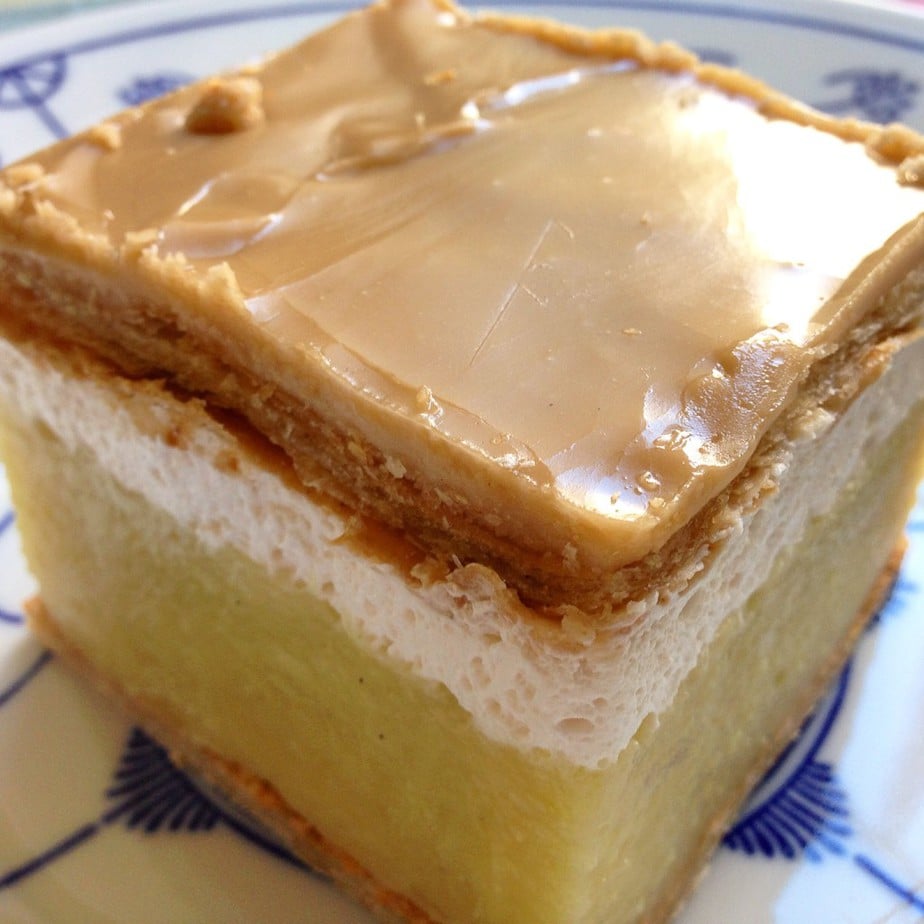 Napfényes Étterem has a huge dessert case! I tried the cherry coffee cake, vanilla cream cake, and another creamy vanilla cake topped with tangy raspberry jam. They were all insanely good so don’t hesitate to try all of them. 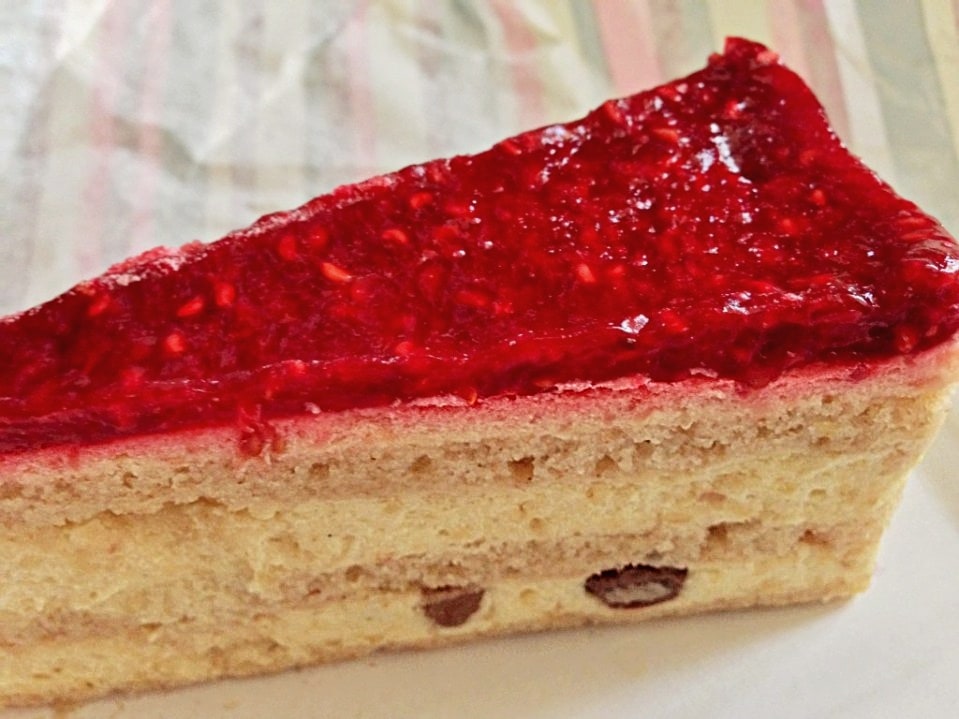 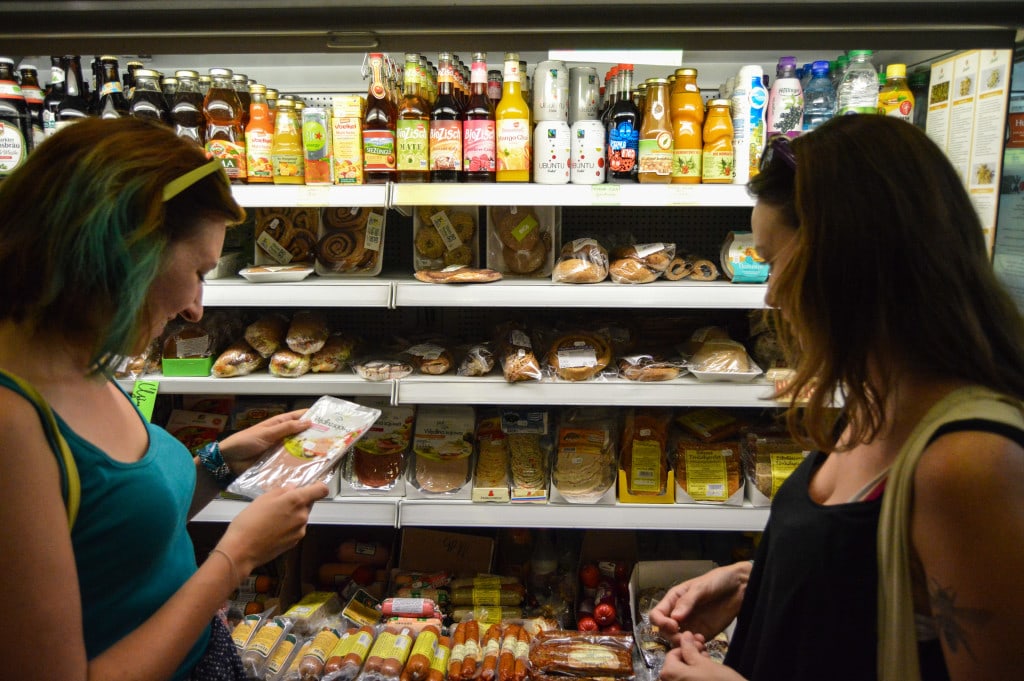 They have all the typical items you see at a health food store like vitamins, grains, and nuts. They also have vegan versions of traditional Hungarian items like sausages and desserts, and Hungarian made products like vegan ice cream and poppy seed oil.

The staff here are extremely enthusiastic and helpful. It’s a lovely little store so I highly recommend stopping by if you need to stock up on vegan groceries in Budapest or need to satisfy your sweet tooth with a takeaway dessert. 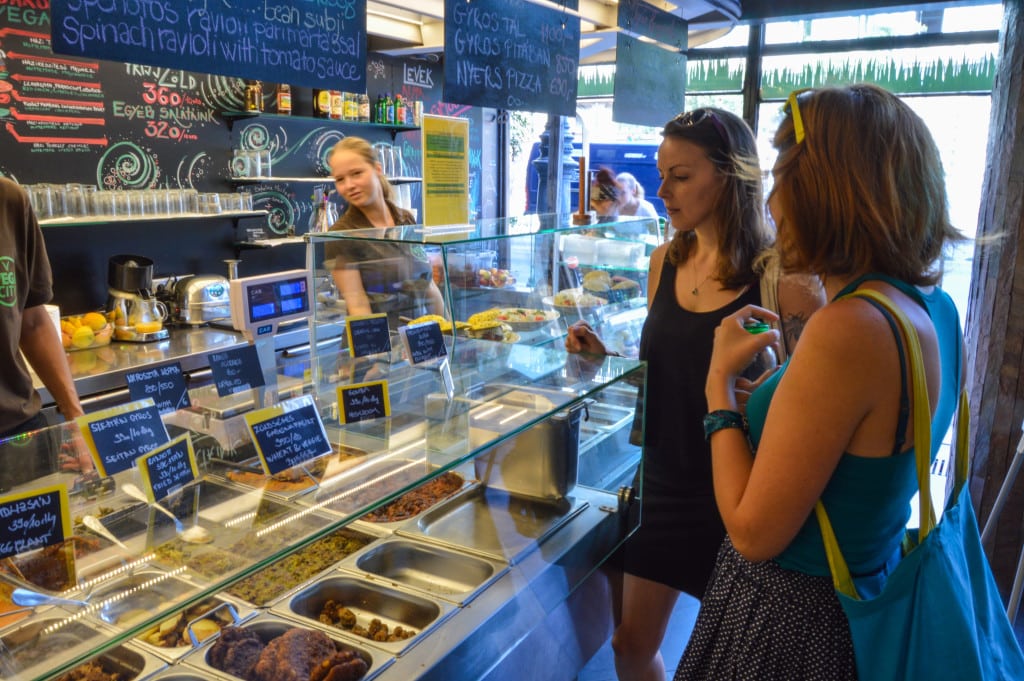 The problem I had with VegaCity is that there are too many tempting dishes to choose from. It’s like trying to figure out which present to open first on Christmas morning. I had such a hard time deciding that I let Judit pick my dishes for me. I wasn’t disappointed! 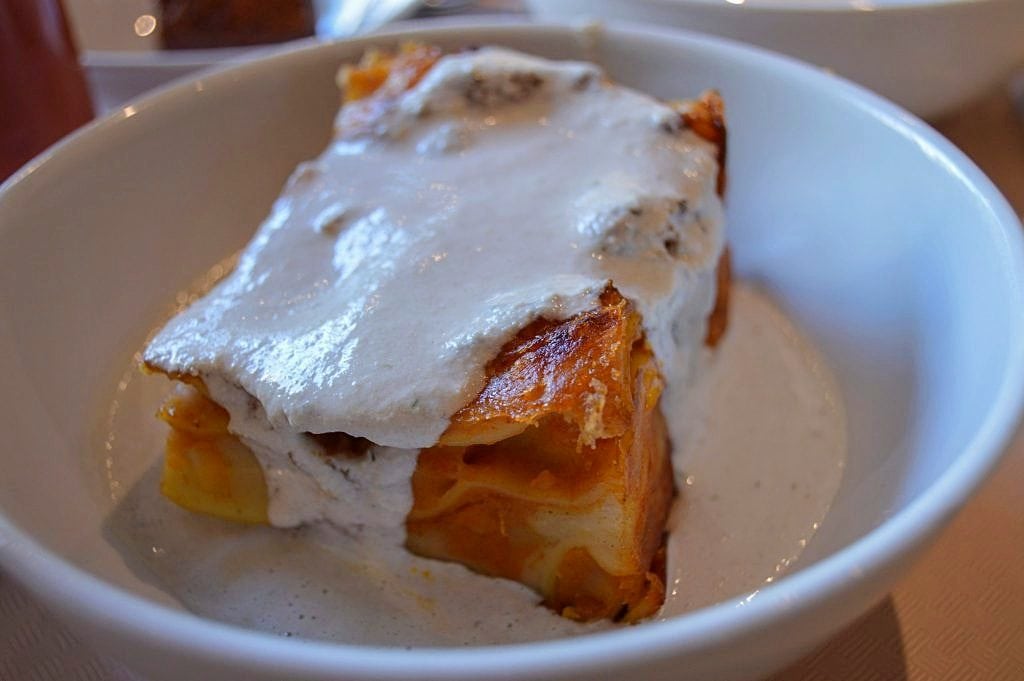 She chose a veganized version of a traditional Hungarian dish called Krumplis Teszta, which I can only describe as the best fucking idea anyone has ever had when it comes to savory dishes.

Krumplis Teszta is a baked casserole composed of potatoes, pasta, and paprika and is usually served with sour cream (ours came with sunflower seed “sour cream”). I LOVED this creamy, carb-loaded dish. 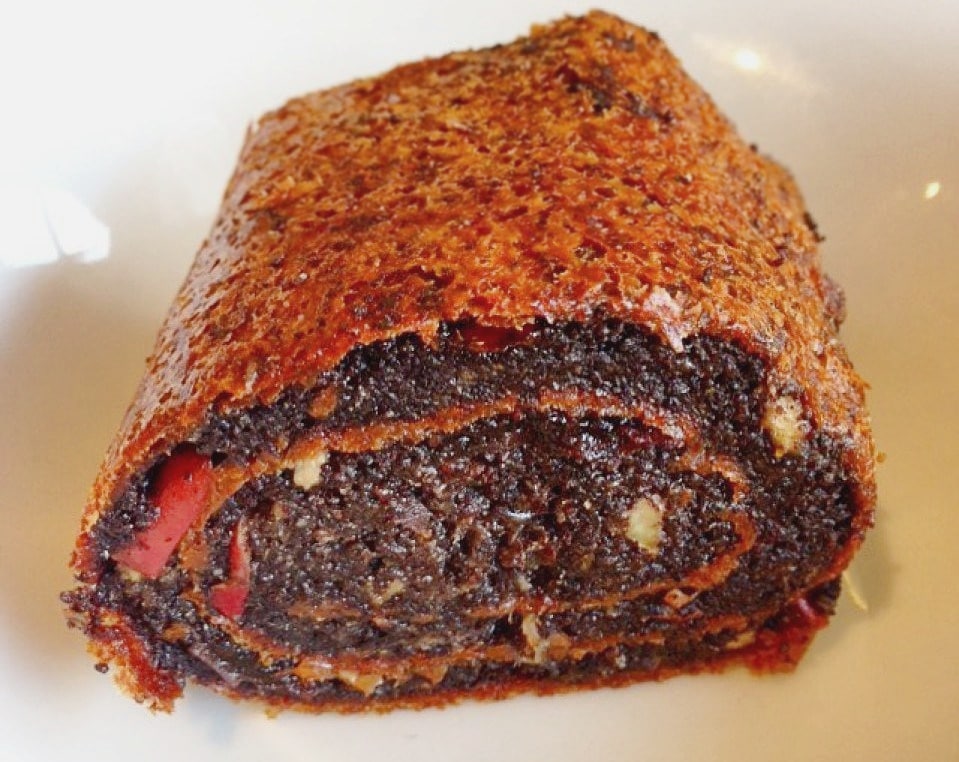 Hungarians might be as serious about poppy seeds as they are about paprika. The stuff is everywhere. So for dessert we had a raw vegan version of a traditional Strudel filled with the little black seeds called Makos Retes.

The cake was tender and moist and the poppy seed filling was slightly sweet and bitter. Absolutely worth trying when you visit. 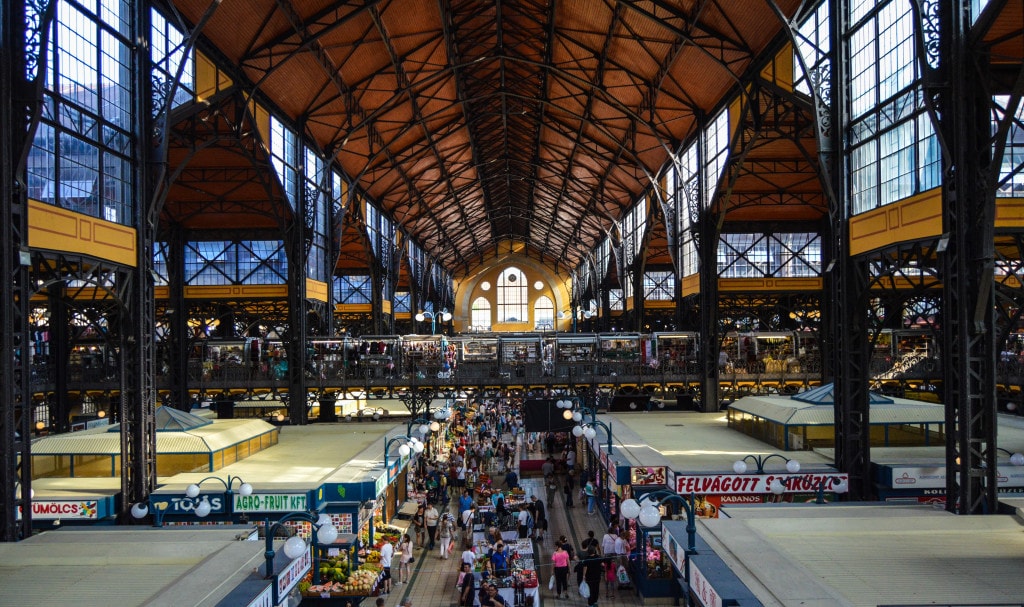 The Great Market Hall was built in 1896 (officially opened in 1897), is spread out over 2,110 square meter, and has hundreds of stalls. You can find everything from fresh produce, pickled fruits and vegetables, and traditional Hungarian products like paprika and homemade horseradish (which I bought and is perfect slathered on vegan hot dogs).

Even though the market is huge, it has the most calm and tranquil atmosphere of any market I’ve been to so far. 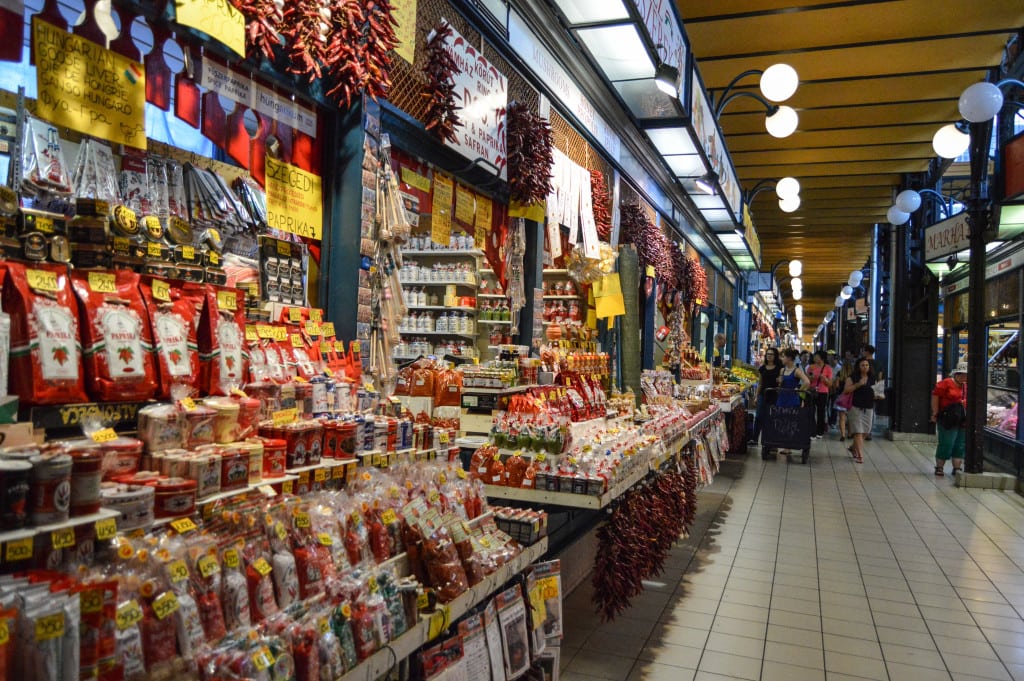 Hungarian Paprika was everywhere, and there are a lot of varieties. It can be confusing which one to buy so I asked Judit for a few tips, which she happily gave me. She said the best and most authentic paprika usually comes in the least attractive and most plain packaging. So don’t be fooled by nice designs and pretty wrapping.

Also, there are two kinds of paprika, sweet and spicy. You can tell the difference by color. The spicy paprika is lighter because the pepper seeds and veins are included in the blend, and the sweet paprika is darker because it only includes the flesh of the pepper. 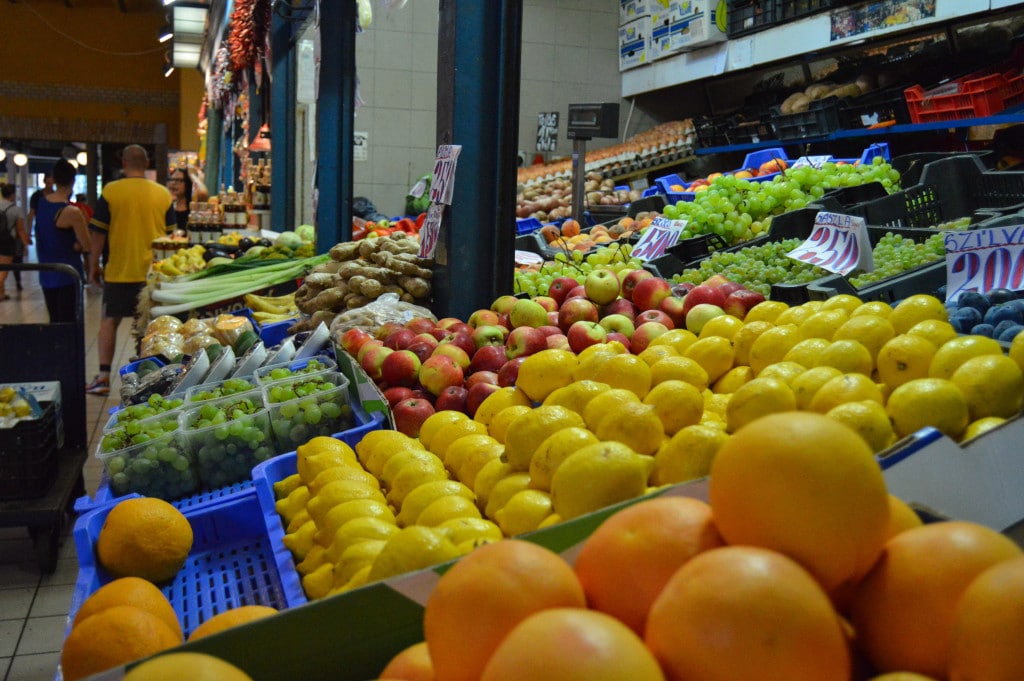 Did you know that Hungarians are obsessed with mushrooms and mushroom hunting? Don’t worry, I didn’t either.

They’re pretty skilled foragers but the task can be a deadly activity if you pick and consume the wrong kind. Not wanting to lose any of their citizens to mushroom poisoning, the Hungarian government opened an office in the market where foragers can bring their shrooms to and have them analyzed by an expert free of charge. 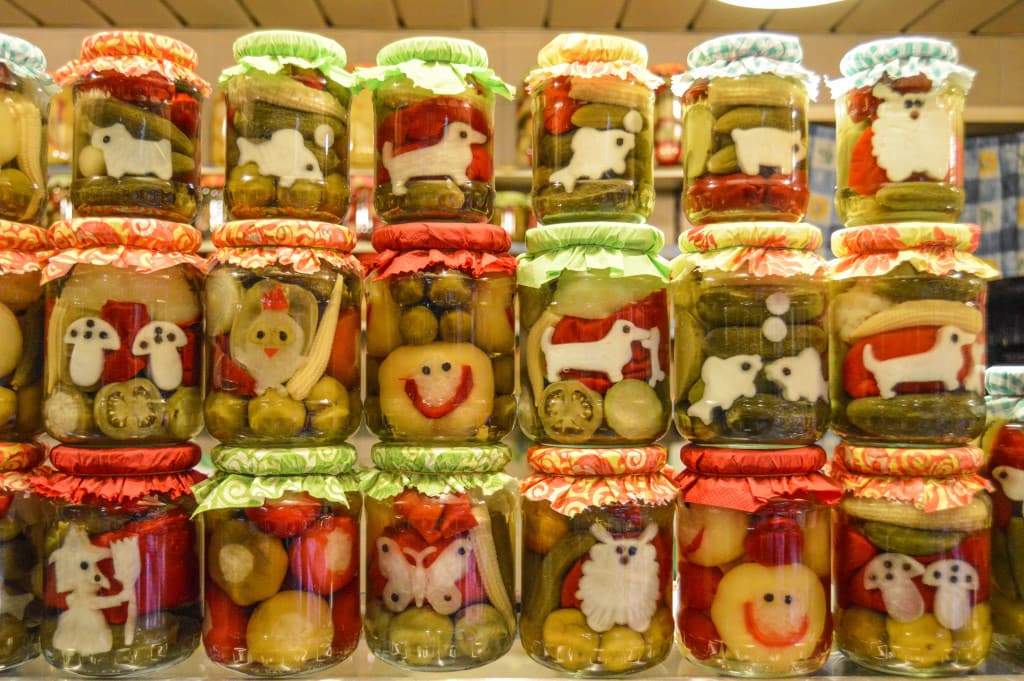 Even before we got to the bottom of the stairs a strong smell invaded our nostrils. Turns out the basement of the market is reserved for the more “stinky” items like fish and pickled food.

We visited a stall with a myriad of pickled items to choose from including pickled baby watermelon! Of course I had to try one. It was probably the most sour things I’ve ever eaten, yet it was still enjoyable. If you’re an adventurous eater, give them a try. It was a really nice way to end our tour of the Belvárosi Piac market. 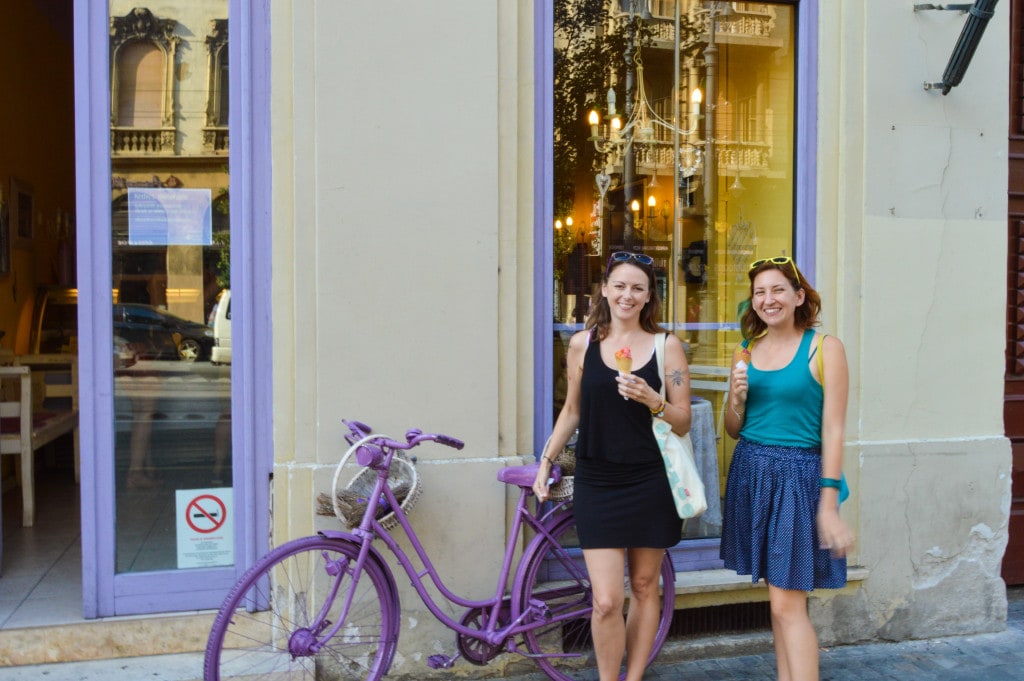 Levendula Ice Cream Shop has a few locations around Budapest and one is conveniently located just a hop, skip, and a jump from the market.

They have several vegan flavors like chocolate chili, watermelon, mint berry, and arugula strawberry. They even have vegan, gluten free cones! All the shops are decorated in lavender and have a basked adorned bicycle out front.

Their ice cream was really nice and the perfect treat on a hot summer day. 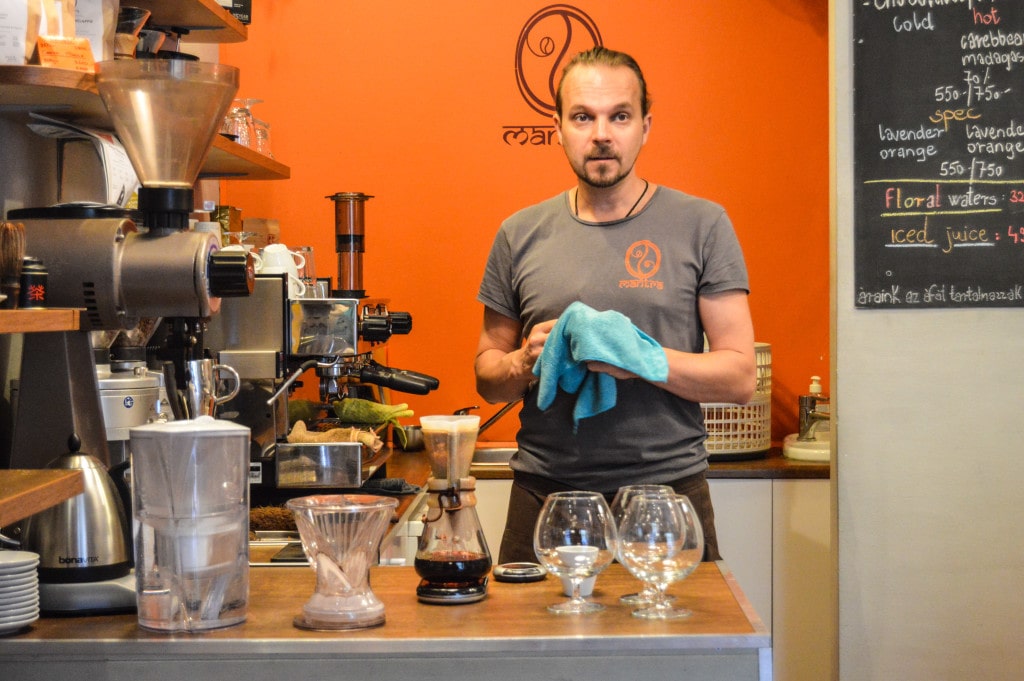 Budapest has a long love affair with coffee that started in the 16th century with the Turkish occupation. By the 1900’s there were over 600 coffee houses in the city. Unfortunately, many of the nicer ones disappeared during communist times.

Recently, however, trendy coffee shops focusing on various brew techniques have been popping up across Budapest. Like every good America, I enjoy drip coffee more than its espresso style cousin (apologies to my Italian friends) so these shops are a dream come true.

We visited a number of coffee shops on our tour but decided to have a few cups at Mantra Specialty Coffee Minibar. Kristian, the owner and barista, brewed three cups of the dark stuff for us using different techniques: Aeropress, Chemex, and a pour over. The differences in color and taste were subtle but nonetheless noticeable.

This guy really knows what he is doing when it comes to coffee. He uses high quality beans, prepares each cup with love and care, and even serves them in large bulbous glasses which, as with wine, makes it easier to enjoy the aroma. Be sure to stop by if you need a fancy pick-me-up.

At the end of the tour my belly was full, my feet were tired, and my soul was all warm and fuzzy. Judit is an incredible tour guide and I’d recommend her to anyone visiting Budapest, vegan or not. Be sure to check out the Budapest1010 website for more details about her tours and to book one with her. Oh and be sure to mention us when you do.

Looking for more vegan goodness in Budapest, check out this vegan guide from my friends at Indefinite Adventure. 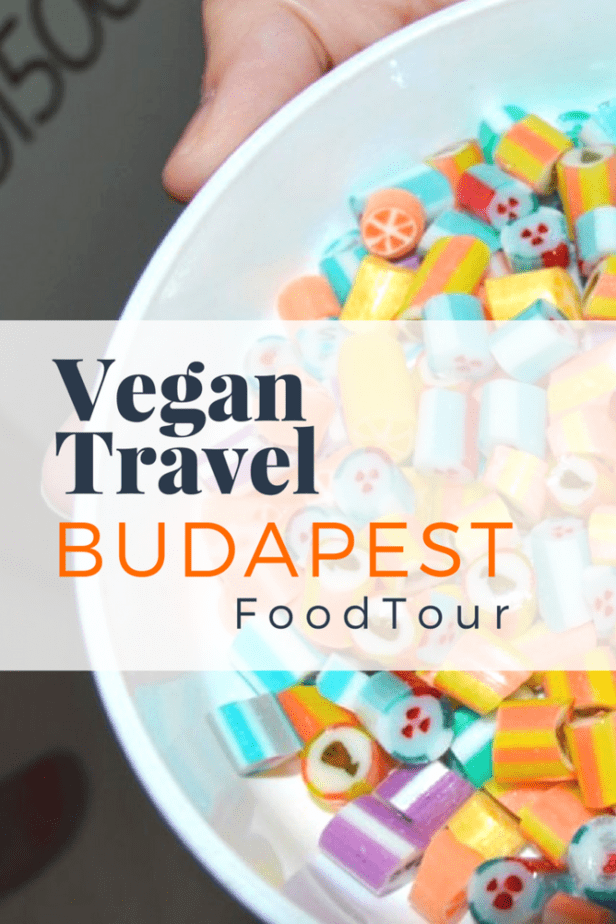 DISCLAIMER: Judit at Budapest101 was kind enough to provide her tour to us free of charge. We are immensely grateful for her partnership. All thoughts and opinions are our own and formed without any prior agreement of a favorable review. 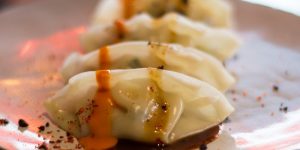 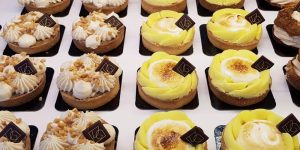 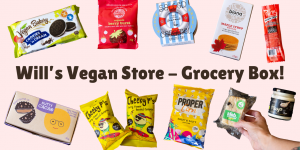 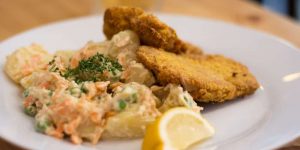 I want YOU to be involved in Veggie Visa!