Looking for the best vegan restaurants in Krakow Poland? Look no further, this is your Vegan Krakow Guide!

Polish cities are surprisingly super vegan friendly, and Krakow is no exception. To say being vegan in Krakow is a problem, is downright loony.

Krakow is an excellent place to start exploring Poland because it’s chocked full of interesting things to do, beautiful architecture, and cool neighborhoods. Wander around Poland’s second largest city and you’re sure to discover loads of gems, and work up a nice appetite. But don’t fret if you’re a vegan in Krakow, because there’s always delicious vegan Polish pierogi, vegan burgers, and even vegan sushi nearby to settle your hunger pangs.

Heading to Prague next? Check out my guide! 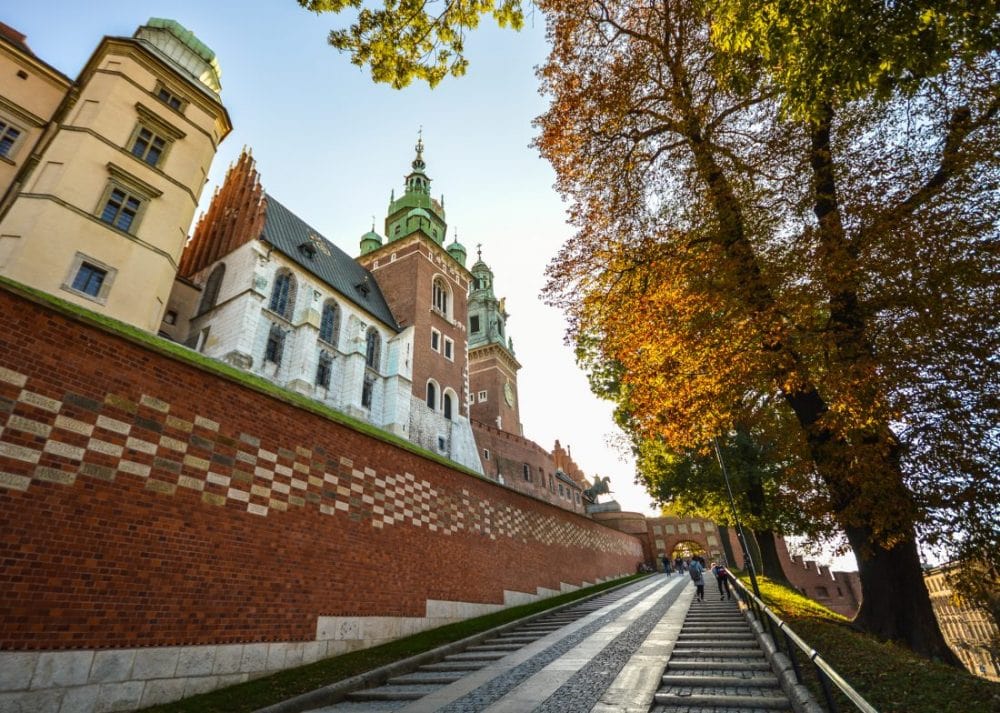 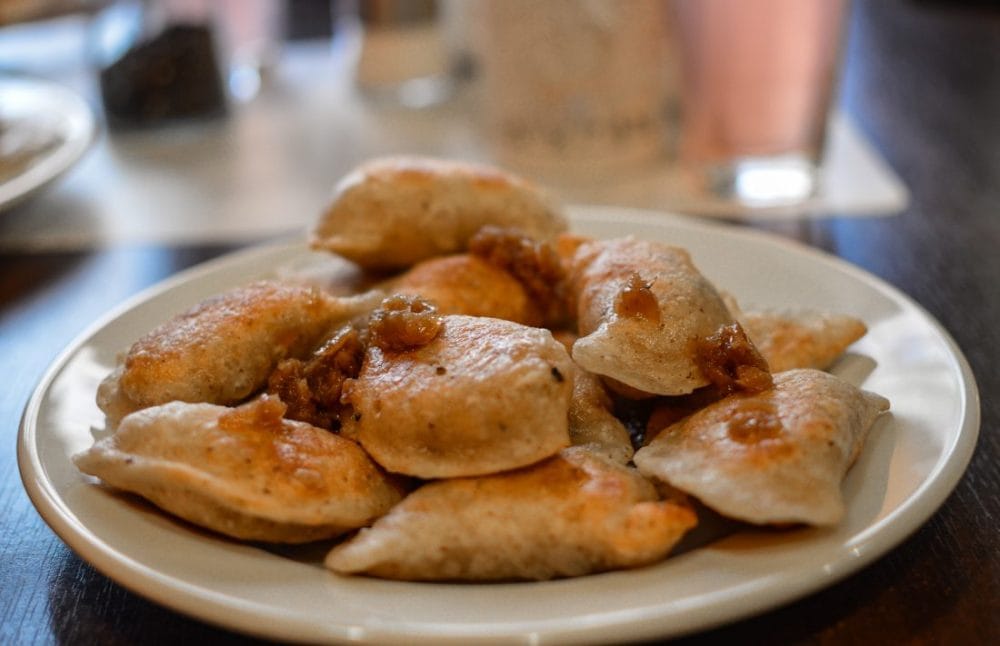 If you only eat one thing in Krakow, it should be Polish pierogi.

I remember the first time I had pierogi years ago. The experience was akin to the first time I had an orgasm – totally ignorant to its existence before having one and baffled afterward that I’d gone my entire life without them. An obsession was born. Pierogi were among my favorite things to eat in the world.

Krakow is full of pierogi. Signs advertise them everywhere, especially in old town. But in my opinion, there is only one place to head for the best vegan pierogi in Krakow – Pierogowy Raj, a little hole in the wall restaurant just a block from St. Florian’s Gate in Old Town.

The restaurant has meaty, vegetarian, and vegan pierogi on the menu so it’s a great option if you’re visiting Krakow alone or with omni friends.

My favorite vegan pierogi on the menu was the sauerkraut and mushroom, but the broccoli, olive, and soybean stuffed pierogi were a close second. Each bite of these perfect pockets was perfection. Savory, flavorful, and delicious.

Tips: The pierogi normally come boiled but you can pay a little extra to get them fried, and always, always, always get them topped with caramelized onion! 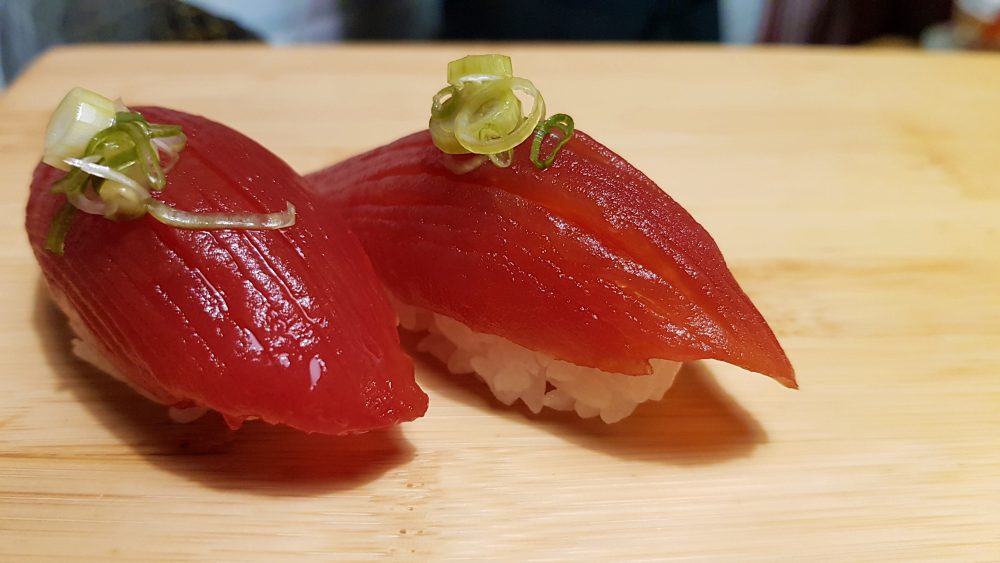 Youmiko Sushi is located in Kazimierz, Krakow’s historic Jewish Quarter. This sushi restaurant wasn’t on my radar, but I stumbled upon it one afternoon while wandering around this trendy neighborhood. The “Vegan Sushi” advertisement on the board enticed me so I brought my friends there later that evening for dinner. It was possibly the best decision I made during my time in Krakow.

We sat at the bar, less than a foot away from the sushi chef, and were mesmerized as he constructed each piece of our 12 piece tasting menu.

The first piece, vegan tuna, blew our minds. In fact, we rejected it upon first offer; it looked so much like tuna we wondered how it could possibly be vegan sushi.

After the chef confirmed it was indeed vegan we gave it a go, and it was pure magic. Never have I had vegan sushi like this before. The “tuna” tasted of salt and sea, and had a subtly sweet flavor. The texture was so similar to fish it might have fooled even my omni dining companion. 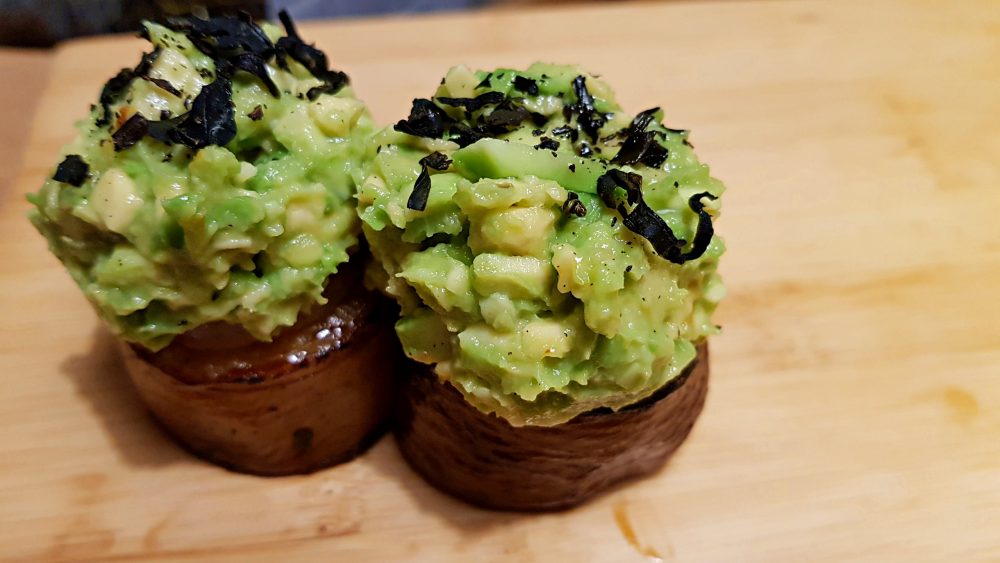 We were totally blown away and patiently sipped our earthy Genmaicha tea waiting for the next piece to land on our serving board. That’s how the rest of the night went. Anticipating each course, having our minds blown, and again waiting for more.

The entire dining experience could have easily passed for one in New York, Paris, or London. Incredibly creative and high quality food, excellent service, and unique atmosphere. But, unlike dining in the afore mentioned cities, the bill for this 12 course menu cost under €20 per person. 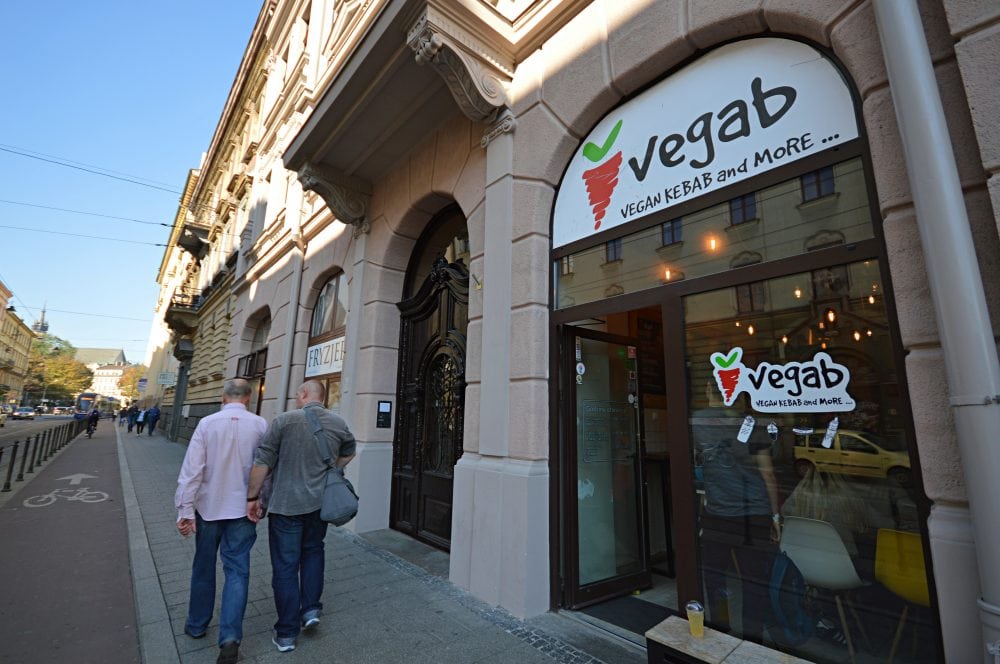 Vegab is a fast food restaurant serving the best vegan kebabs in Krakow.

Vegab’s glorious shaved seitan kebab wraps are intimidatingly big at first glance, but after one bite you’ll have no problem finishing the whole thing. They’re just that good. 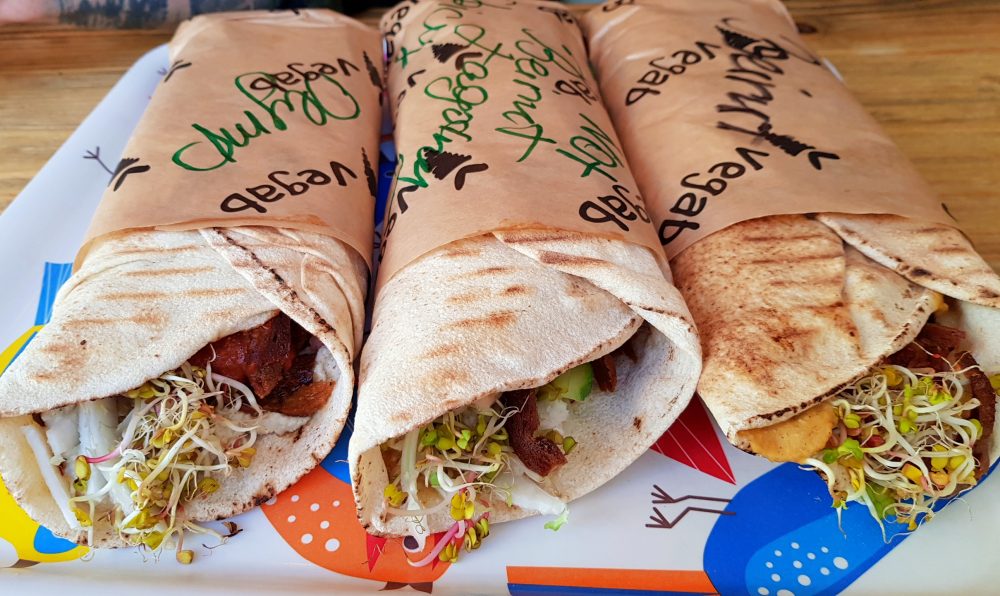 My favorite was the Olymp wrap with sunflower seed sauce, tzatziki, sundried tomatoes, and black olives. The crispy hot-pressed wraps are perfect for lunch after a long morning of sightseeing or if you’re trying to cure a hangover.

A new vegan bakery has opened in Krakow!

All of Zaczyn baked items are homemade and prepared onsite. When I say “homemade” I mean homemade. Not only do they make the baked items onsite, they even grind their own flours onsite. Additionally, their beautiful breads take about 25 hours to prepare as they use a long fermenting process…so you know they are in no hurry to pump out less than amazing products.

You can find both sweet and savory breads including cardamom buns, fruity kolaches, sourdough bread, baguettes and more! 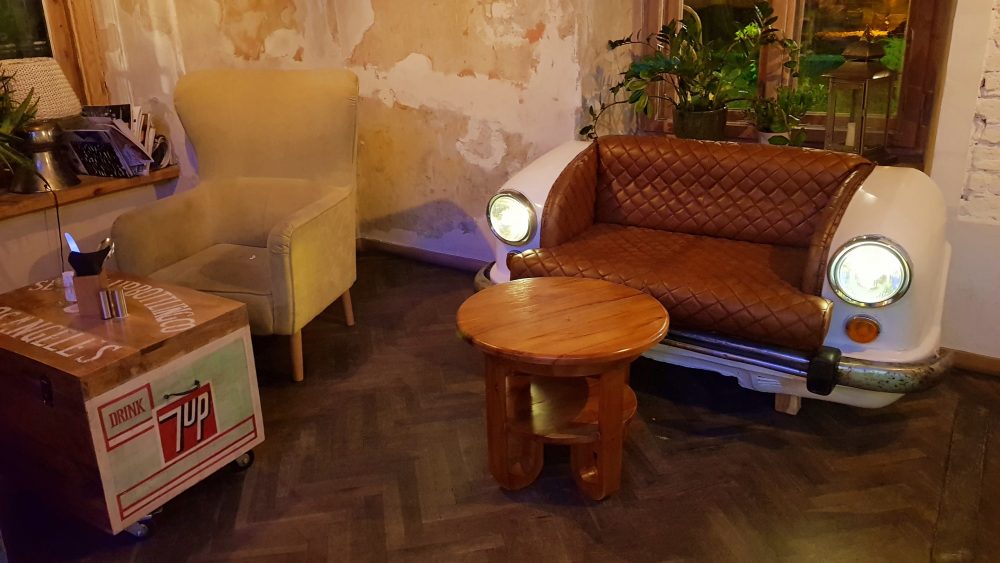 Veganic was suggested to me by a fellow vegan as a great place to go for a fancy meal, and by the decor and atmosphere I totally get it. It’s cozy, albeit massive, and comfortable.

The menu is pretty extensive and dishes sound incredibly tempting at first glance. Unfortunately, of the six different dishes I tried (three appetizers, and three main courses) only one was exceptional. The gnocchi with kale pesto, cashew cream, sundried tomatoes, and vegan parmesan stood out in a crowd of otherwise bland, yet not bad, dishes. 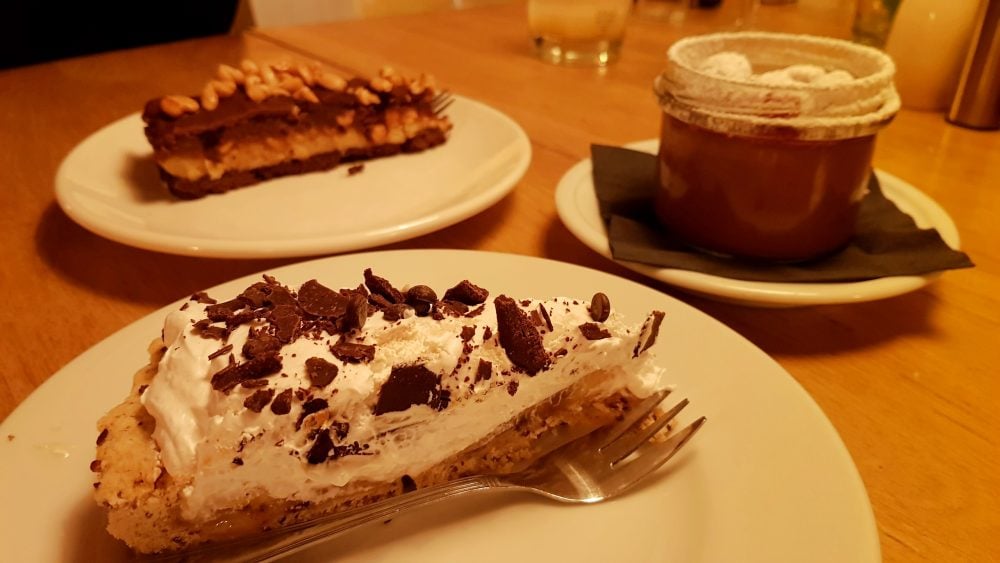 That said, the desserts at Veganic are exceptional, probably the best vegan desserts in Krakow, and well worth heading to the restaurant for.

The French chocolate mousse, Snickers tart, and Banoffee pie competed for a place in my heart and in the end all three won. If I had to choose only one, I suppose it would be the Snickers tart. I guess I’m a sucker for nostalgic childhood memories. 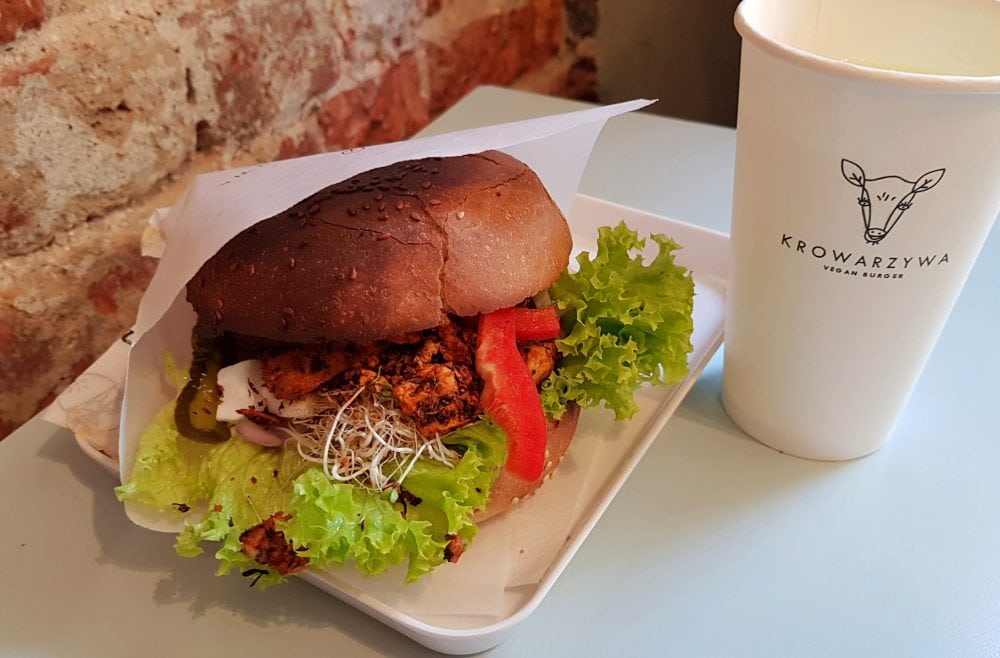 If you have a hankering for a vegan burger in Krakow head to Krowarzywa. This little fast food joint offers visitors four different vegan patty options, including tofu, seitan pastrami, chickpea, and millet with sunflower and pumpkin, to chose from.

You can have your burger either on a bun or in a wrap and served with fries or coleslaw on the side. My favorite was the seitan pastrami. It was tender, juicy, and well seasoned, albeit hugely messy to eat. 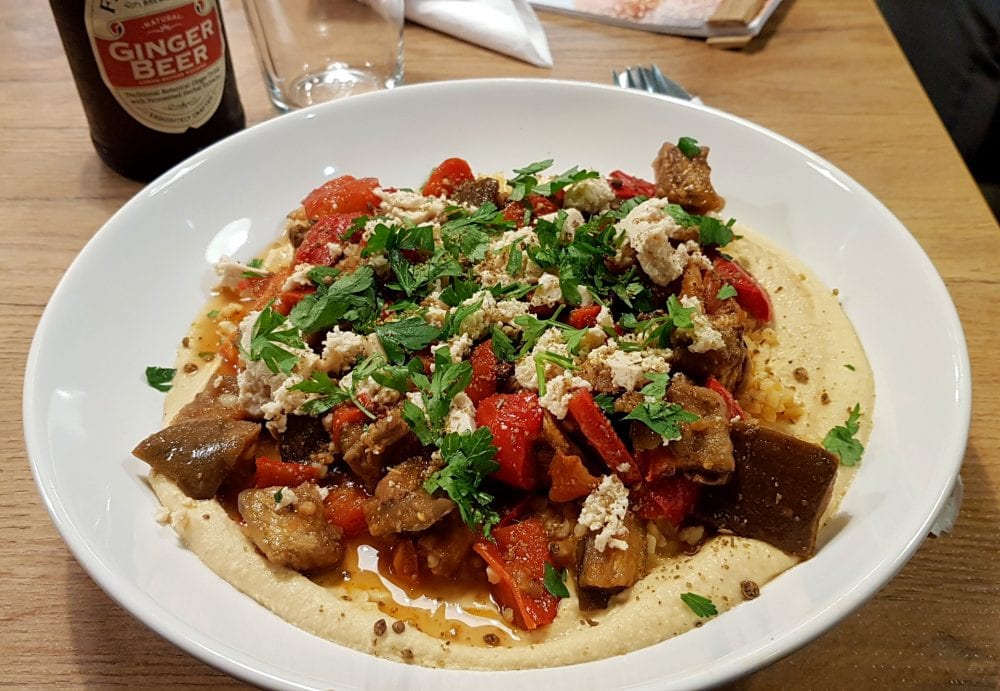 Another restaurant known for its vegan burgers, and well worth a visit if you’re in the historic Jewish district, is Mihiderka.

When I visited, I wasn’t in the mood for a burger and opted instead for the hummus with marinated eggplant, tofu feta, and parsley. The dish was well seasoned, fresh, and hearty. A great lunchtime option. 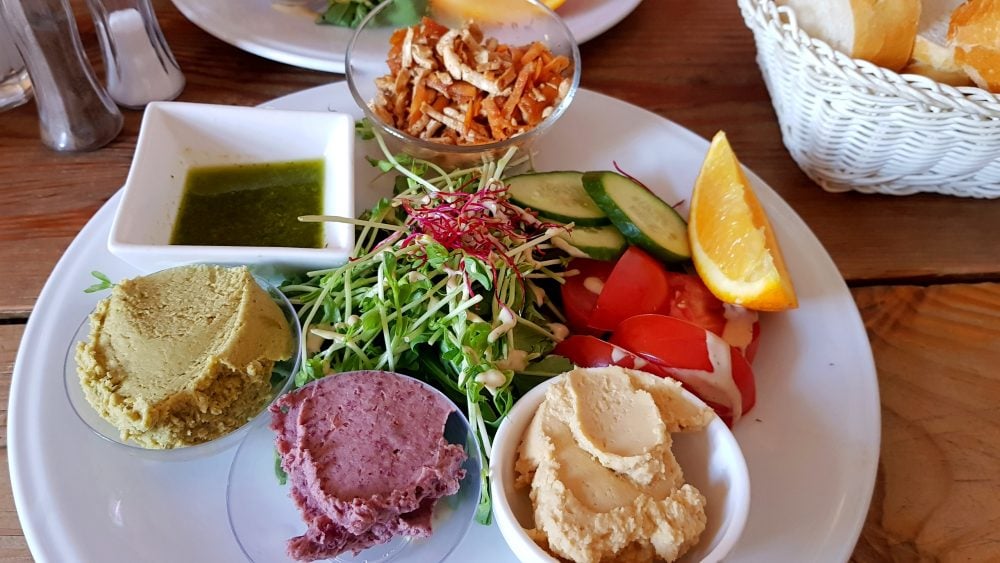 If you’re looking for a delicious vegan brunch in Krakow then Cafe Mlynek is a fantastic option. The menu, which isn’t entirely vegan, includes a sweet and savory option.

The savory vegan brunch menu comes with three dips, tofu scramble, salad, bread, and pesto dressing. Overall a very healthy yet filling dish. If your sweet tooth is making a fuss opt for the vegan pancakes. They’re unlike any pancakes I’ve had before. The cornmeal batter is deep fried, and served topped with homemade apple compote and maple syrup. They’re a massive sugar rush but totally worth it.

What I liked the most about Cafe Mlynek, aside from the food, was the chill atmosphere, friendly service, and self-serve, unlimited brewed coffee and juice bar. 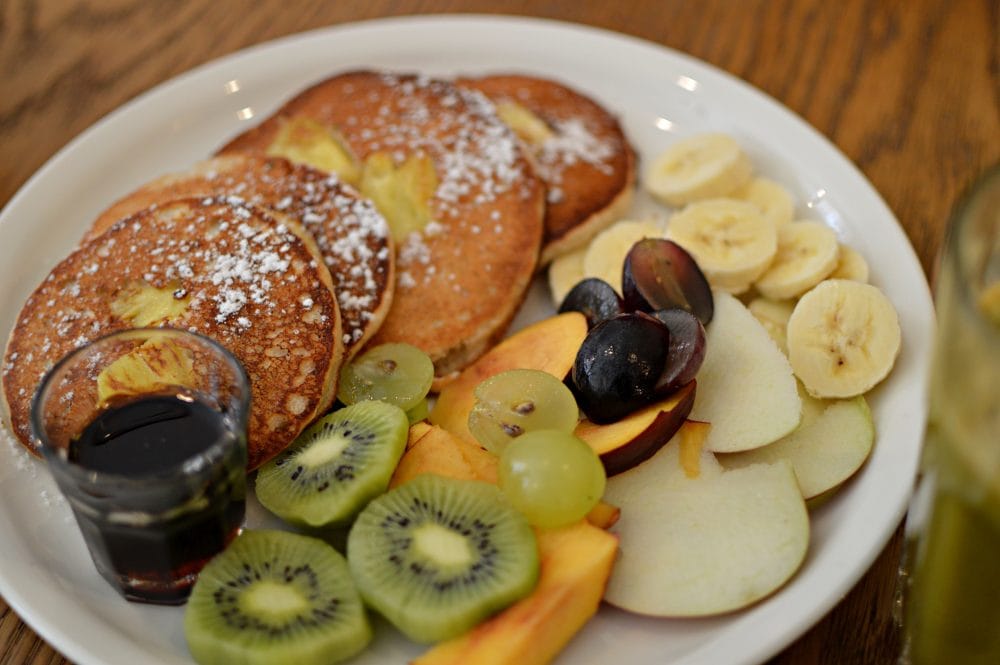 Mo-ja also has a tasty vegan brunch option that comes with a few dips, salad, avocado, bread, excellent eggy-tasting tofu scramble, and a healthy smoothie bowl. Regardless which option you choose, you’ll be a happy camper. 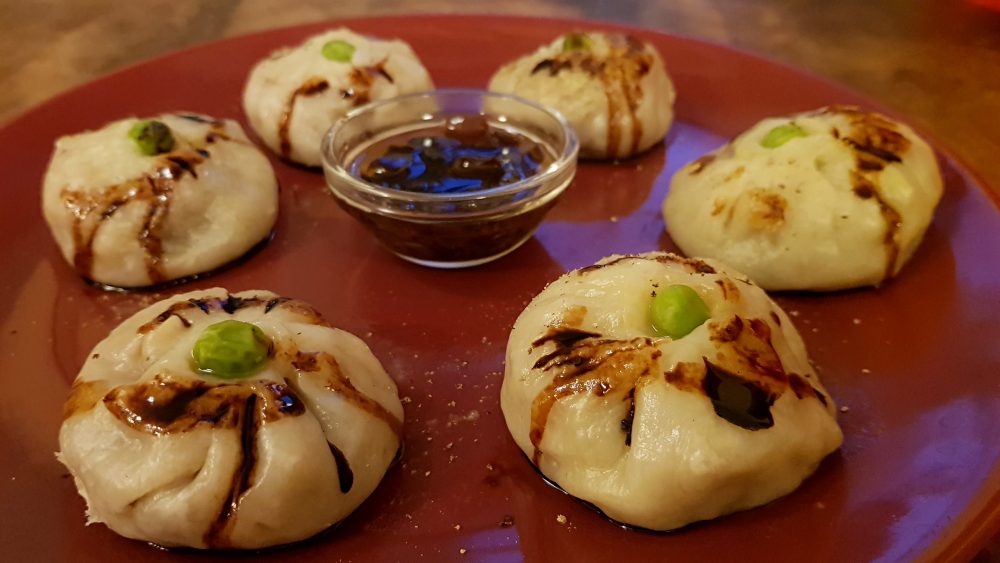 Momo Bar wegetarianski is a super basic, order-at-the-counter restaurant with vegan momos and vegan savory pancakes. It’s a great spot to go if you want a snack or light lunch.

The momos are filled with vegetables and topped with a sweet and spicy sauce. The pancakes, which I highly recommend, can be topped with a number of different options including my favorite beetroot and peanut sauce. 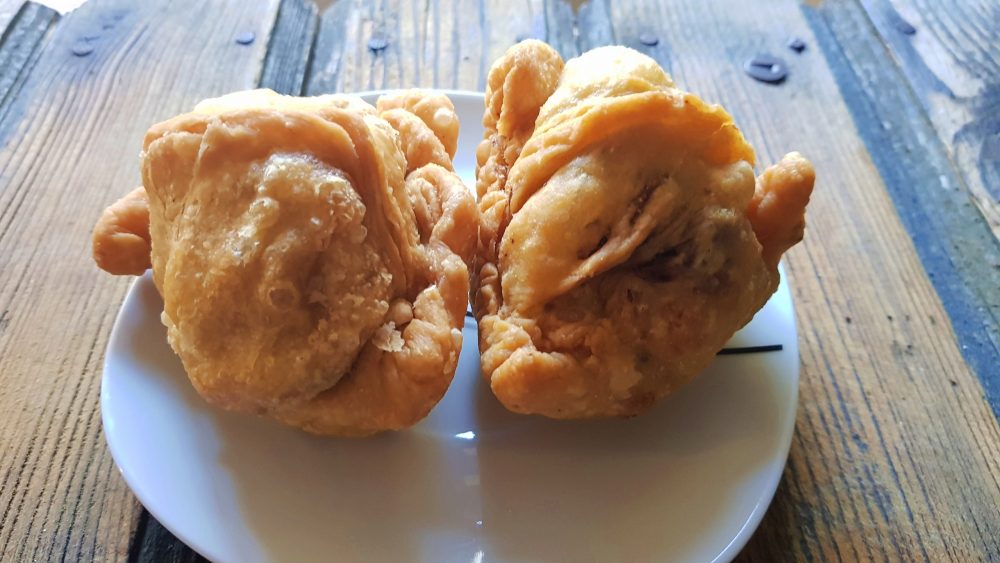 HariPrasad Samosa & Curry serves takeaway vegan Indian food. I stumbled upon this restaurant one day and opted for a few samosas. One was filled with black beans and the other with sweet potato. The filling was well seasoned, and the crust had a crispy exterior and chewy interior. Both were excellent as a snack or savory left-over breakfast.

Thank you so much for this guide! I landed in Krakow about 5 hours ago and came across this guide while searching for places to get vegan pierogi! I’m going to work my way through this list over the next four days...

Hi Emily, so happy you found my guide. I hope it is super helpful to you :) Be sure to go to Pierogowy Raj, it's soooooo good. :D

I spent one year living in Kraków, and had such a wonderful time.

I actually did not like Krowarzywa and Mlynek that much, but would definitely point out Bezmleczny and Sufeat. Both have many traditional Polish dishes, are inexpensive and sooo good. Also Masolit and Farma are worth mentioning. And I have to mention Fairma, a place to buy vegan shoes and fashion!

You didn't like Mlynek? Whaaaaaa ;) Love that place! Thanks for the tips though! I really want to get back to Krakow soon so I'll try to get to those spots. Also, I did visit Fairma. Bought a shirt and some earrings there. Love that shop too. :)

I am not vegan, but this all looks amazing!

Bhajan Cafe is easily one of the best Vegetarian and Vegan restaurants in Krakow! Delicious, authentic Indian food, fully vegetarian. All options can be vegan too, including fantastic mango lassi made with coconut milk, or dairy. Awesome!