Looking for a vegan Malaga guide? Or some of the best vegan restaurants in Malaga Spain? You’ve come to the right place!

If you’re surprised to discover an article devoted to vegan food in Malaga, you’re probably not alone. However, Spain has really gotten its act together. The vegan food scene seems to be exploding, at least in Andalusia.

I traveled through the region a few years ago and let’s just say, the options were few and far between. My best advice back then was to make sure you stay somewhere with a kitchen so you can cook vegan food for yourself.

Well my friends, those days are over. Spain has arrived…to the vegan party.

Malaga is bursting at the seams with vegan options. Not only are there loads of great restaurants in Malaga serving vegan food, but there are also plenty of health food stores dotted around town where you can get things like tofu, vegan cheese, and vegan chorizo. Hell, you can even find tofu at the local Carrefour and Spanish tortas are now marked as vegan. But that’s another article.

For now, let’s stick to the Best Vegan Food in Malaga Spain!

But first, here are a few tips for vegan travel in Spain (and Malaga).

If you’re interested in seeing what Malaga has to offer beyond the vegan food scene, check out our epic guide, Exploring Andalusia – Things to Do in Malaga on my other travel site Just a Pack! 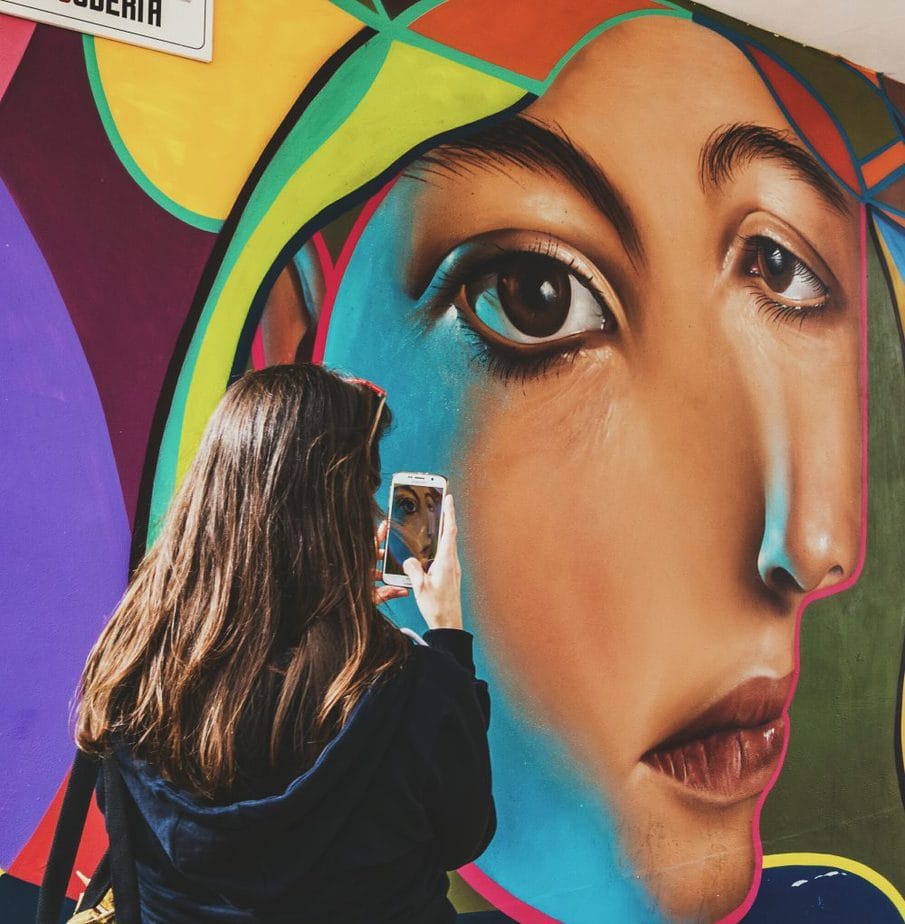 Without further ado, here are the best vegan restaurants in Malaga Spain.

Recyclo Bike Cafe was the first restaurant I ate at in Malaga, and it was love at first bite.

I’ve never seen vegan chorizo in a restaurant in Spain so it’s been years since I was able to enjoy this meaty product. The first mouthful flooded my brain with culinary memories from past trips.

The exterior was crispy, interior chewy, and the flavor was full-on. The fried salty potato cubes and the side salad with pickled red onions were perfect partners.

Recyclo has a number of vegan dishes on the menu in addition to the Chorizo. Be sure to try the vegan chocolate peanut butter cake if they have it. It’s one of the best vegan desserts I’ve ever had.

Recyclo is a must on any vegan Malaga tour!

Vegetariano El Calafate in Malaga is a vegetarian and vegan restaurant with a brilliant Menu del Dia (Menu of the Day). There are usually at least 2-3 vegan options for each of the three courses on offer.

I visited the restaurant several times while I was in Malaga. Each time I got their vegan Porra soup. It’s a blended soup similar to Gazpacho that also contains bread as a thickener. The incredibly flavorful soup reeks (in the best possible way) of garlic, cucumber, and tomatoes. Make sure you try it at least once.

Beets are super popular in Malaga. You’ll see them at all the markets and grocery stores, and on plenty of restaurant menus. By far my favorite dish using this root veggie in Malaga was Vegetariano El Calafate’s beet pesto pasta. It is so incredibly simple, yet so full of flavor. The beets are pulverized with almonds, garlic, and olive oil, and served with pasta. Really, it was amazing.

If you’re looking for the best vegan lunch in Malaga then head to Vegetariano El Calafate.

For the best vegan tapas in Malaga, check out Andino Gastrobar.

This gastrobar isn’t vegan or vegetarian but they serve up some of the best vegan tapas in Spain. So, it has earned its place in this vegan Malaga Guide!

I recommend going all in and having the vegan tapas plate which includes three different items.

The selection changes but hope and pray you get the empanadas. These crispy little pockets of vegan goodness are downright delicious.

El Vegetariano de la Alcazabilla is just a stone’s throw from the Alcazaba in Malaga. This little restaurant has only a few vegan items on the menu, and it’s a bit expensive, but is totally worth visiting once or twice.

The best option is the vegan platter. It’s a variety of tapas sized dishes like “meatballs” in tomato sauce, fried seitan with sticky chili sauce, couscous, and curried veggies. Delicious!

The restaurant also offers a seitan burger, which is actually nothing like it sounds. It’s two grilled seitan patties that come with a few side dishes, and is surprisingly good!

Reviv, located on Calle Fajardo, is an all vegan cafe in Malaga offering raw, sugar free and gluten free cakes and truffles. In addition to sweets, Reviv also has a few dishes like veggie burgers and toasts on the menu to take care of any savory cravings you might have.

The owner, a young Bulgarian woman, created Reviv to with the aim to spread the word about high quality healthy food that is good for humans and the plant we live on.

Reviv is not only a cafe, but the space is also used for art expositions. So, you can enjoy a bit of culture while munching on healthy, homemade food that is made with nutrition and quality in mind!

Nic Pic is a new vegetarian restaurant in Malaga. It’s located in the boutique hostel Picnic Dreams so the restaurant is open all day, which is great if you tend to get hungry right in the middle of siesta when everything else is closed.

Nic Pic also serve something I was shocked to find in Spain. A vegan cheese plate! I actually didn’t even realize they had this until my last day in Malaga, because the menu calls it a Cheese and Chorizo Spread. I guess I imagined something more like a dip but was pleasantly surprised.

The dish comes with two vegan cheeses, one of which is like a blue cheese. I actually never liked blue cheese before going vegan, but have to say that this one was fantastic. The other cheese and chorizo dip are equally nice. My only complaint with the cheese plate is that the crackers are a little weird. Unfortunately none of their homemade bread is vegan, so it’s currently the only option.

Canadu is a vegetarian restaurant located in Malaga’s Plaza de la Merced. The restaurant makes the most of local Spanish ingredients and serves up homestyle cuisine. Some of the vegan dishes include the vegan risotto with almonds, or the stuffed eggplant with vegan cheese, rice, and tomato sauce.

The food at Canadu is solid and perfect if you’re looking for a comforting lunch or dinner.

Brunchit is a restaurant in Malaga that serves mostly…you guessed it, brunch options. However they also serve homemade pizza, hamburgers, salads, desserts, smoothies, and juices.

The vegan pizza is downright awesome, and even includes vegan cheese! The chewy crispy homemade crust also comes piled high with lots of veggies like eggplant, tomatoes, zucchini, and arugula.

If you’re craving vegan pizza in Malaga then Brunchit is where it’s at!

If you’re looking for a vegan friendly hostel in Malaga look no further than Picnic Dreams Boutique Hostel. Located half a block from Plaza de la Merced, the hostel is excellently located.

The boutique hostel has a variety of cozy private and shared rooms to chose from, some of which have a lovely little balcony. Rooms are decorated with natural materials, light colors, and up-cycled items. All rooms include air conditioning and heating, so you’ll feel comfortable no matter what the season.

Picnic Dreams Boutique Hostel also has a fantastic vegetarian and vegan restaurant called Nic Pic (mentioned above) on-site that’s open from 8:00 am to Midnight so an excellent breakfast, lunch, dinner or snack is always an option.

For more info, independent reviews, or to find the best prices for the Picnic Dreams Boutique Hostel click here.

Hi everybody, I,m from Málaga and I'm afraid there is a big mistake in this article, which is really useful on the other hand. The nap (siesta) is not from 14.00 to 16.00 pm at all. In fact, this our favorite lunch time. All restaurants in Malaga are usually open from 13:00 to 16:00. I hope this information is useful for everybody.

Hi José, thanks for pointing out the error. I've corrected it :) Have a nice day!

Im at nicpic right now. They dont have a cheese plate and say they never had it. This blog is fake as brass.

Gust, quite weird since I just checked their menu online and the dish is still on it. I can assure my website and the picture I took are real. Hope you enjoy the rest of your time in Malaga.

Thank you for the fab post on Vegan food in Malaga, I feel much more prepared for my trip to Malaga in December this year! Love your blog too Randi, hope you can stop by mine one day (it's very new) :)