Having come from Barcelona, a veritable vegan heaven, Andalucia was a bit of a culinary desert for the traveling herbivore. It’s a region in Spain well known for tapas (small plates of food) which mainly consist of pork, beef, eggs, or some other animal product.

No need to skip this part of the country though. Being Vegan in Andalucia, Spain is totally possible and with a bit of research and planning you won’t starve. Plus there’s always Sangria…which does have fruit in it…so it can be a healthy lunch alternative…right? 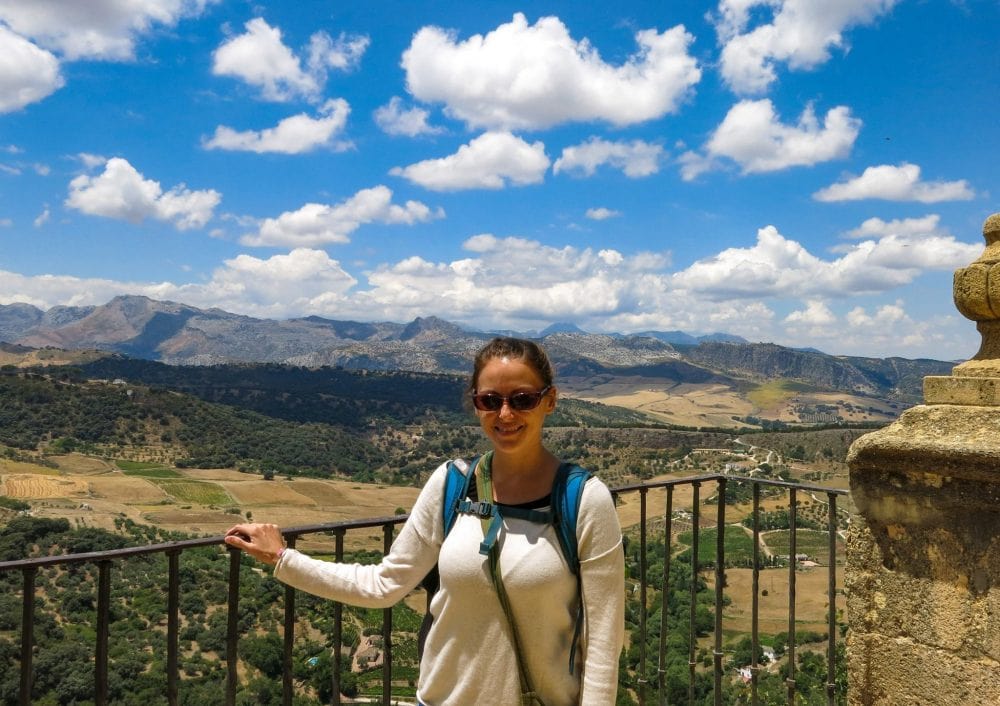 A good go-to dish while in this region is Patatas Bravas. As long as you tell them you want it without the white sauce, it will be vegan. The dish is composed of chunks of fried potatoes and a tangy red sauce. Along with the standard bread basket that comes with every meal, it’s enough to keep you going until you find something more exiting. 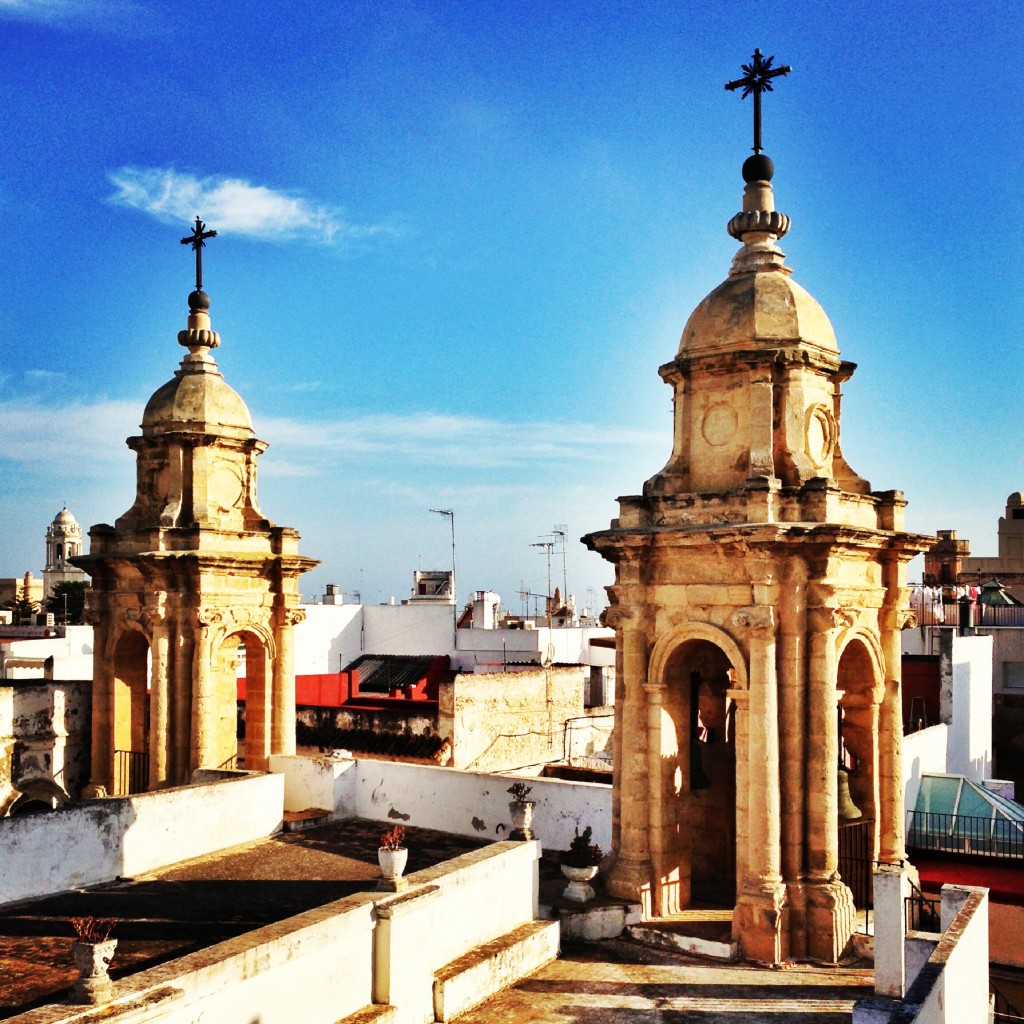 Cadiz, the oldest settlement in Europe, was our next stop. It’s a fairly small town but the vegan options increased considerably. 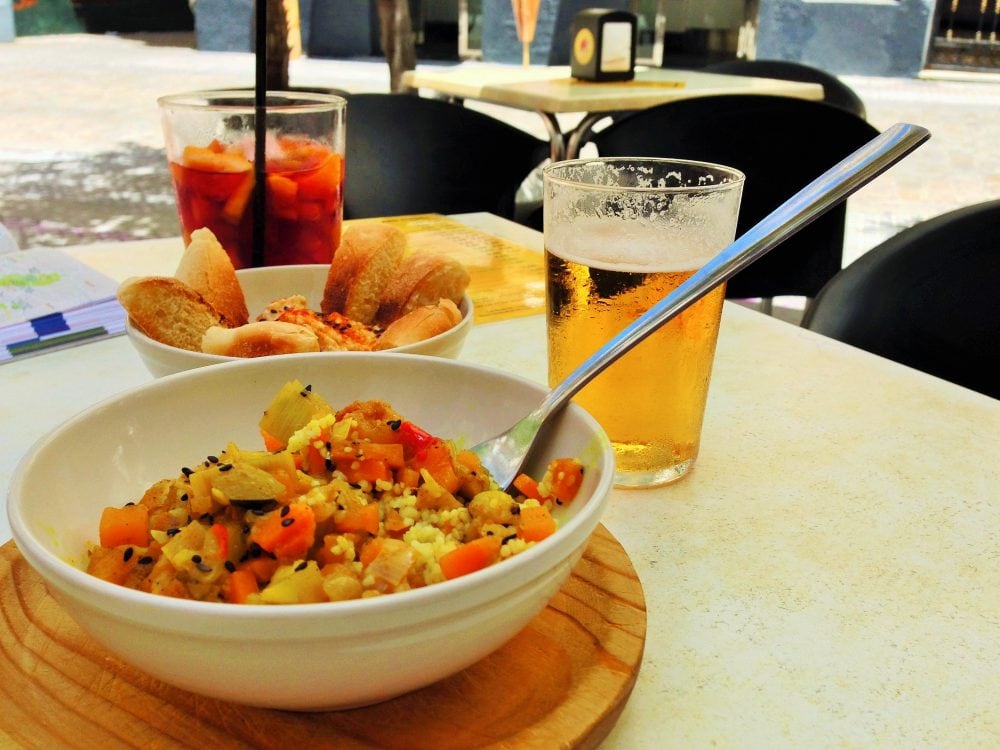 Just a few blocks from our hostel we found a nice little restaurant with outdoor seating called La Cueva De Plocia. Although it wasn’t a vegan restaurant it had plenty of options to choose from and we tried as many as we could in our two visits there. We ordered the hummus, something I could probably eat every single day of my life. It was fresh and flavorful, garlic tinged, accompanied by warm slices of bread, and topped with paprika. Needless to say we gobbled it up quickly. 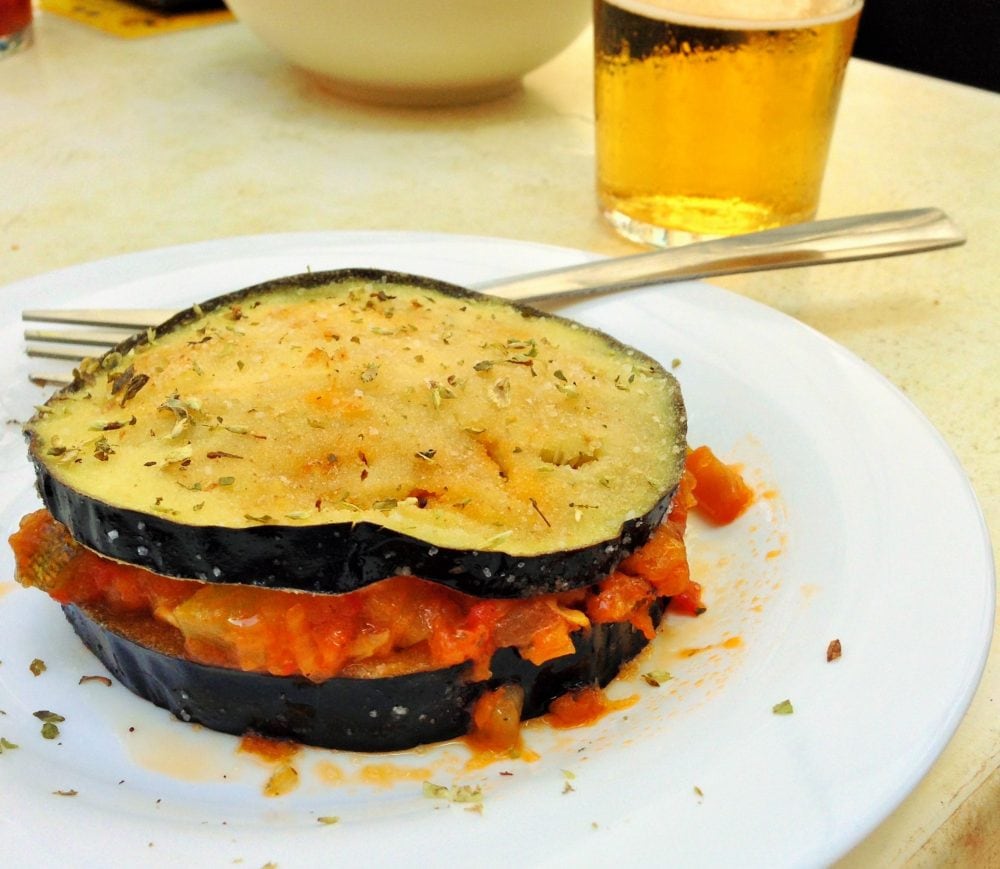 The eggplant pie, ordered sin queso (without cheese), was a tomato ratatouille sandwiched between two golden fried slices of eggplant. A bit too salty but still a tasty dish.

After two visits to La Cueva it was time to explore other options that Cadiz had to offer. This was a bit problematic considering none of the restaurants I found offered many vegetarian options. Rather than go hungry…which I never do if I can avoid it…we decided to see if the restaurant staff would accommodate my dietary restrictions by preparing something off the menu for me.

We came upon a restaurant with an older Spanish gentlemen greeting potential customers out front. He was a friendly fellow and was extremely obliging. In fact, he asked me so many times about my dietary requirements that I started to wonder if there was an misunderstanding but nevertheless I ended up with a pretty nice vegan lunch which was comprised of a tangy, garlicky, chilled gazpacho soup as a starter. The main course was a well seasoned plate of sauteed peas, carrots, and onions. Not the most creative dish but nevertheless highly enjoyable. 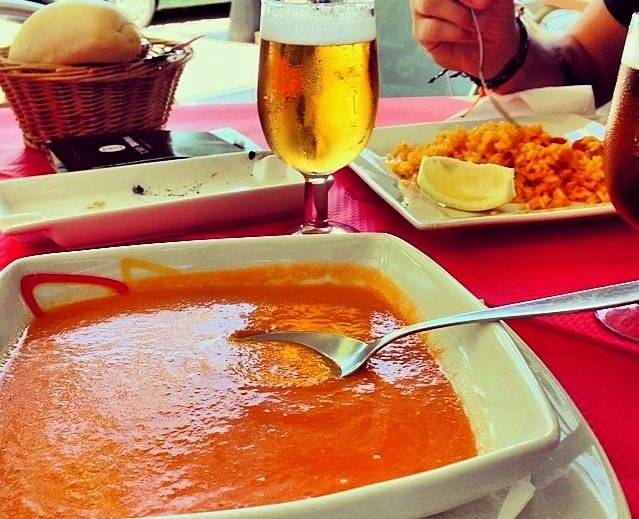 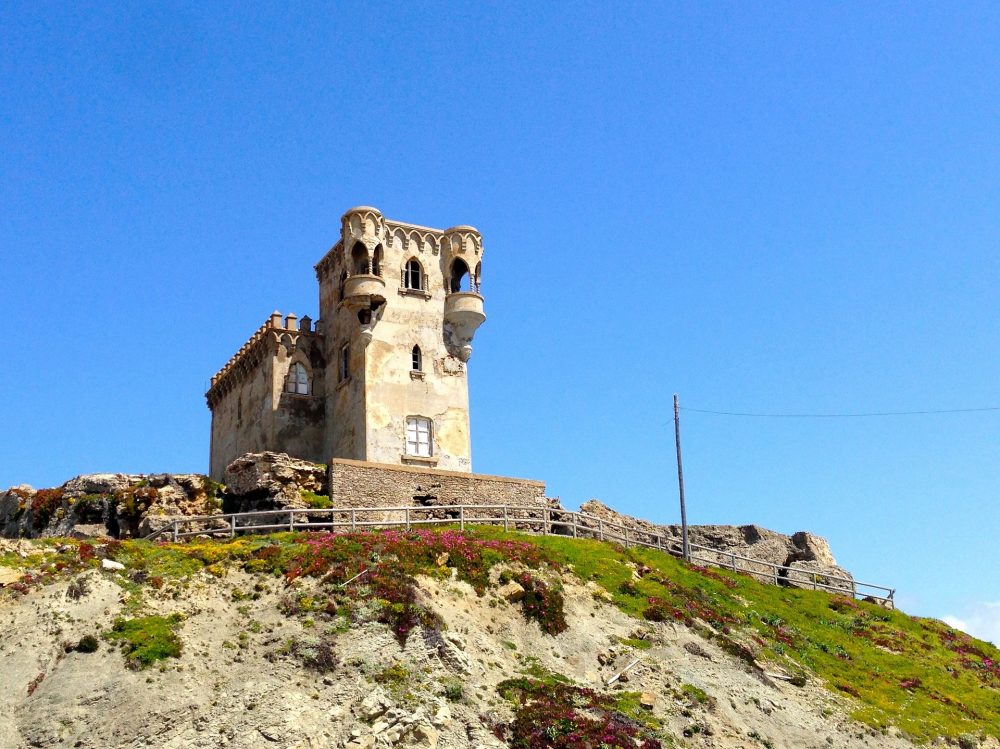 A few days later we headed to the Mediterranean beach town of Tarifa.

On our first stroll through the walled “old town” we stumbled upon a sign advertising a vegetarian and vegan restaurant mere steps away. The restaurant, named Chilimosa, ended up being my favorite vegetarian restaurant in the region. The interior was small and quaint. There was a sign on the wall warning diners that good food takes time, prepping them for a wait. 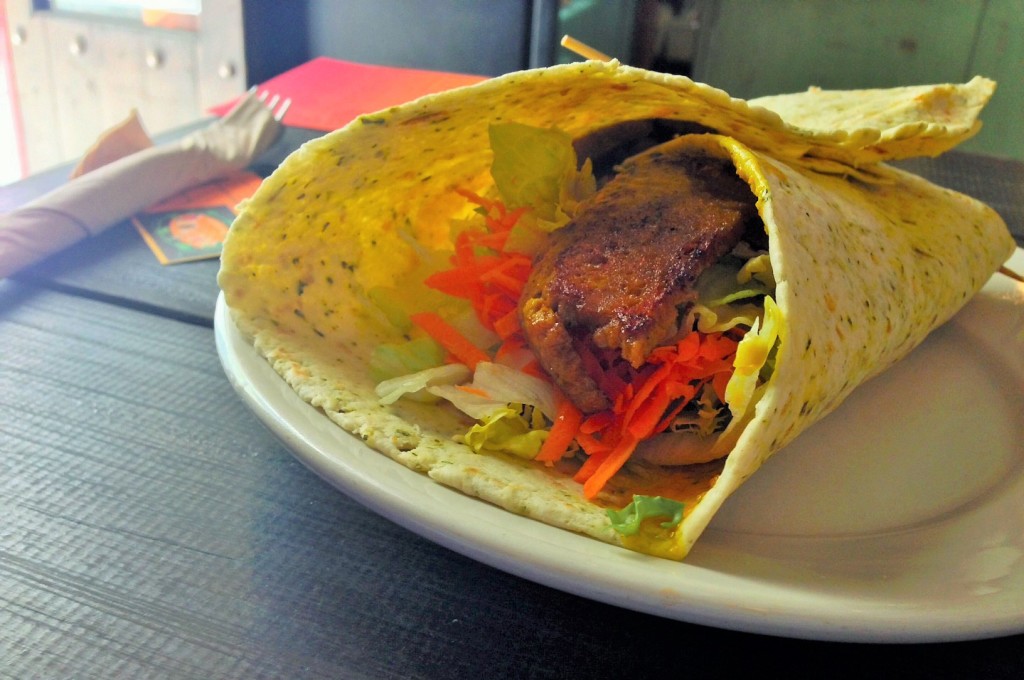 Chilimosa’s menu is something I would expect to find in Brooklyn. Delicious falafel plates with hummus and salad, seitanwraps, soy burgers, empanadas and much more. We spent only 24 hours in Tarifa but ate there three times because I was hooked after my first seitan wrap. Sauteed and slathered in a curry sauce, topped with lettuce, shredded carrots, and wrapped in a nice whole grain tortilla, it was delightful. The falafel plate, which comes with hummus, pita, and salad, was out of this world and shouldn’t be missed. 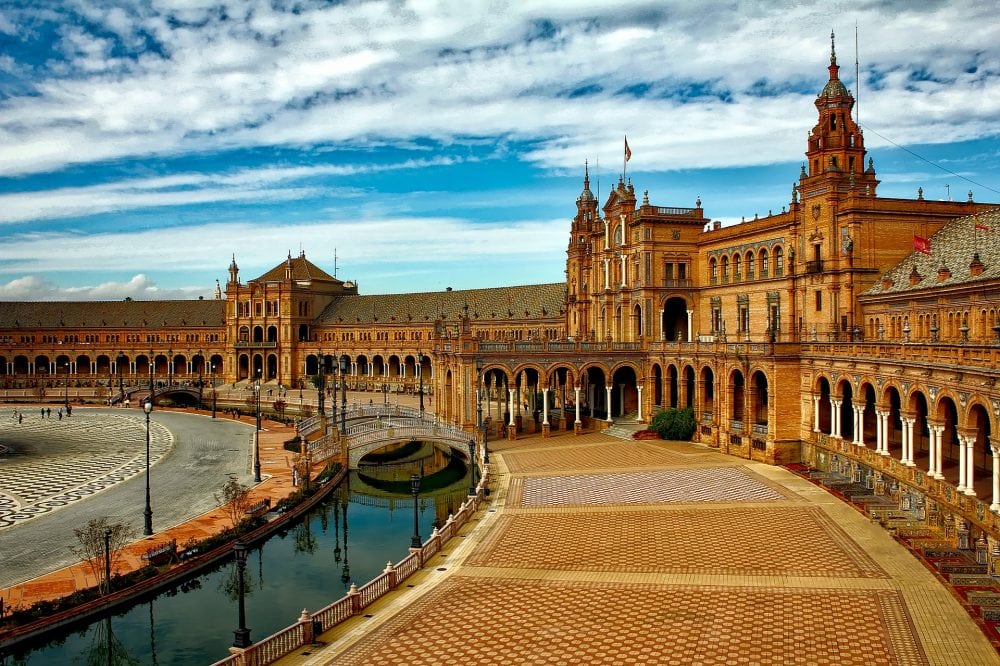 With my takeaway falafel plate from Chilimosa in hand we boarded a bus to Seville, the capital of Andalucia. It’s a hot town and I don’t mean in a sexy kinda way, I mean in a the heat will drain every drop of energy from your body to the point that you have to sleep all day and drink refreshing Sangria constantly just to get through to the evening when you feel more human kinda way. Vegan tapas options were nearly non-existent at most restaurants, aside from the highly appetizing Espinacas con Garbanzos (spinach with chickpeas) which I ordered just about every time I went out to accompany my Patatas Bravas and the ever-present bread basket. 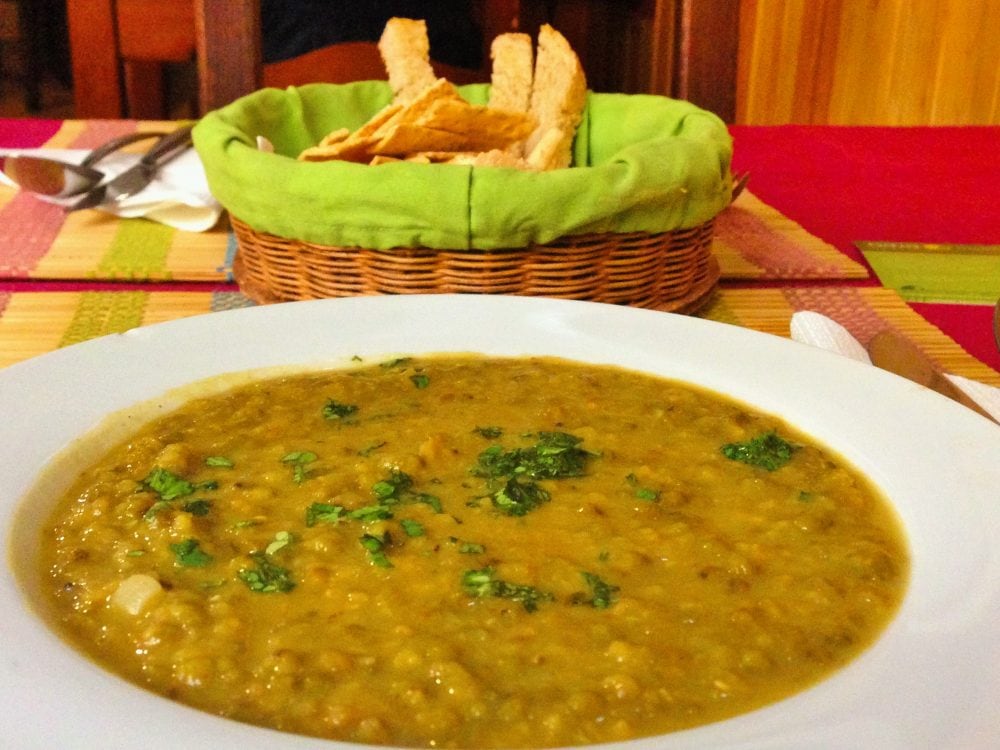 Fortunately, Seville had a few vegan and vegetarian restaurants to choose from and an excellent market in the center of town. One such restaurant was Bar Ecologico Gaia. They have a daily organic lunch menu from Monday to Friday which has several vegan options,costs about €10.00, and comes with three courses. For my first course I sampled the Indian dahl soup. It was everything you want dahl to be, chocked full of lentils, well seasoned, and spicy. 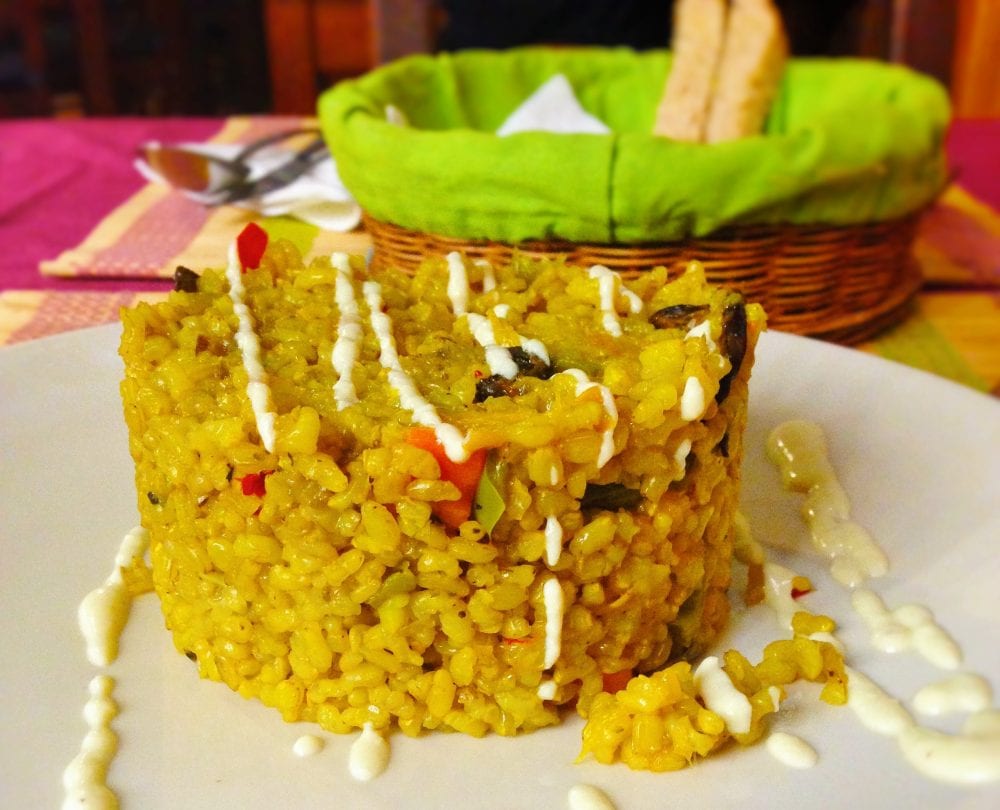 Luckily I visited the restaurant on Paella day and was able to negate the feeling that I was missing out on not having one of southern Spain most well known dishes due to my diet. Their vegan Paella consisted of saffron infused rice with mushrooms, carrots, bell pepper and onions, drizzled with a creamy white sauce. It was fresh, well seasoned, filling, and satiated my craving for this Spanish specialty. 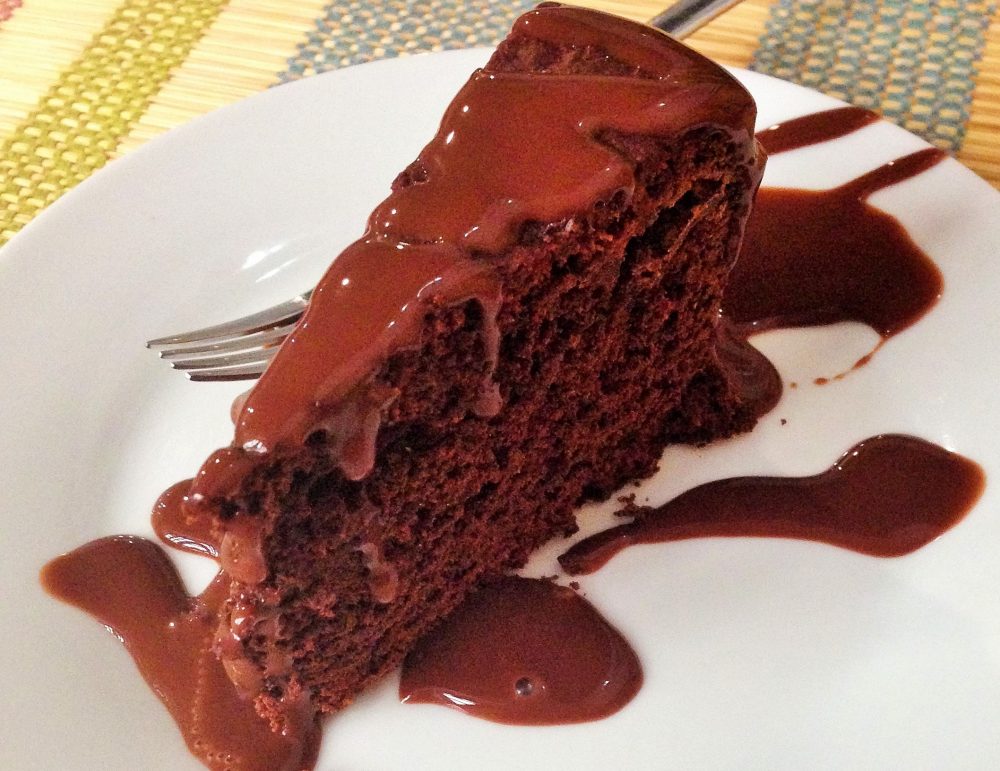 At that point I may have foregone dessert had the lunch menu not included it as my tummy was feeling slightly stretched. Thankfully this wasn’t an option because I had already chosen the vegan chocolate cake as my third course. Thick, rich, and chocolaty, yet not too sweet…exactly what I look for in dessert. The perfect ending to this highly satisfying meal.

The Market at the Metropol Parasol 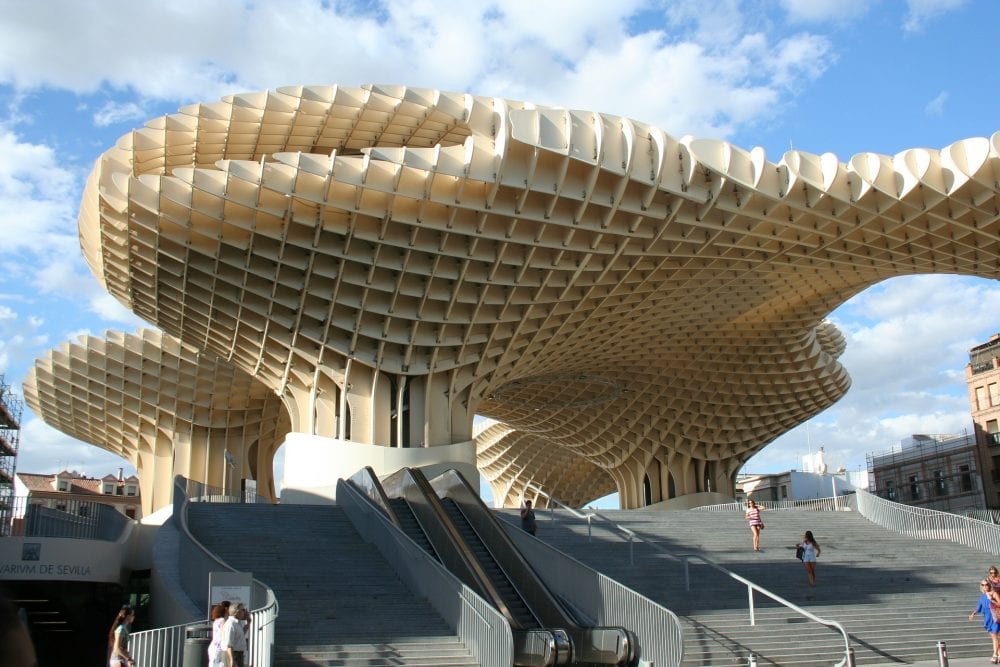 The Metropol Parasol is a fairly new construction in Seville that visitors either love or hate. Nicknamed “The Mushroom” it’s located in the old town of Seville and its architecture is nothing like the surrounding structures. Something one might expect to see in a Dali painting, the building reminded me of the twists and turns of a snakes body while in motion if it had a honeycomb shaped skeleton. It’s comprised of multiple thin, tilting bases with mushrooming rooftops all meeting to form one winding massive structure. 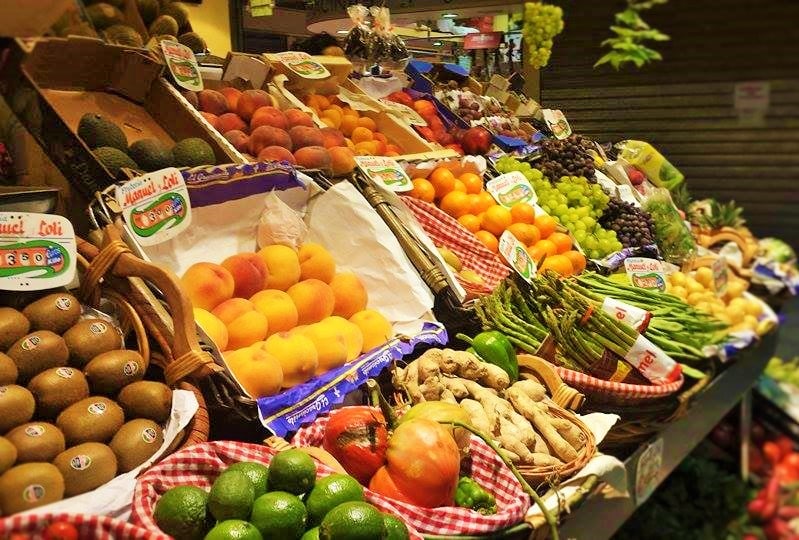 Whatever your feelings are about its design, The Metropol Parasol offers stunning views of the city from its wide sprawled canopy, especially at sunset, and a beautiful market on the ground floor level. Stall after stall of ripe seasonal produce, a vast selection of Spanish olives, and freshly baked bread in various shapes, sizes, and ingredients. One visit here for groceries and you’ll be hooked.

Of all the places we have visited in the past seven months Andalucia wasn’t the easiest one to find vegan food but it does exist if you look hard enough. There were times that I felt frustrated there but it’s not really surprising considering this region has a history of bull fighting and prizes itself on ham. However, the mere fact that I could find delicious vegan food in these smaller towns and cities is a sign that this lifestyle is spreading to all corners of the earth and I’m pretty lucky be able to experience it.

Drink lots of Sangria... got it. Looks like a liquid diet for me, oh dear.

Looks like it was the right plan to make sure that our apartment will have a kitchen, anyway. And at least there's sun so I won't need to comfort eat as much.

There is fruit in Sangria...

Love the photos! Paella, gazpacho and olives are some of my favorite foods. I really have to get to Andalucia some day!