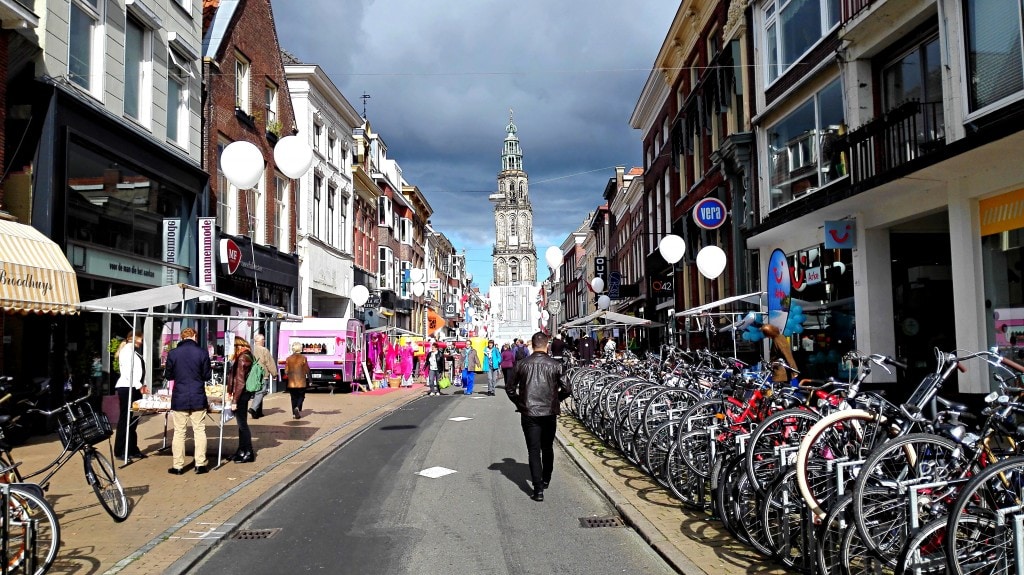 With approximately 200,000 inhabitants (which doesn’t sound like a lot, we know) Groningen is one of the largest cities in The Netherlands. You could also call it the capital of the North.

It’s an international city with about 10% of the sizable student population being foreign. It has the youngest average age of inhabitants and the most extensive nightlife in all of The Netherlands.

It also has one of the oldest universities, 5 museums, and is home of the famous drink Beerenburg, Groninger koek (a dark breakfast cake), and smells of sugar beets in Autumn. You either love it or hate it. Sounds good right?

What’s it like for vegans visiting or living in Groningen?

The vegan scene has been growing fast for the past two years. On Facebook there are at least 1,600 vegans living here which makes it interesting for entrepreneurs to open up vegan cafes and restaurants.

Additionally, the city of Groningen promotes sustainability and green practices, and has even won prizes in this area.

Let us take you on a vegan tour of Groningen? 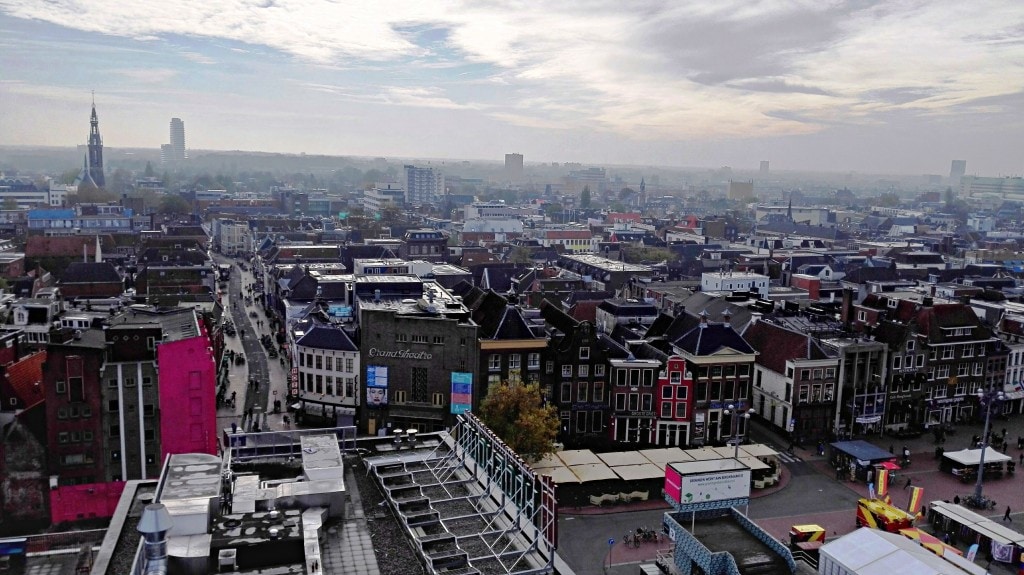 Vegan and Vegetarian Restaurant in Groningen 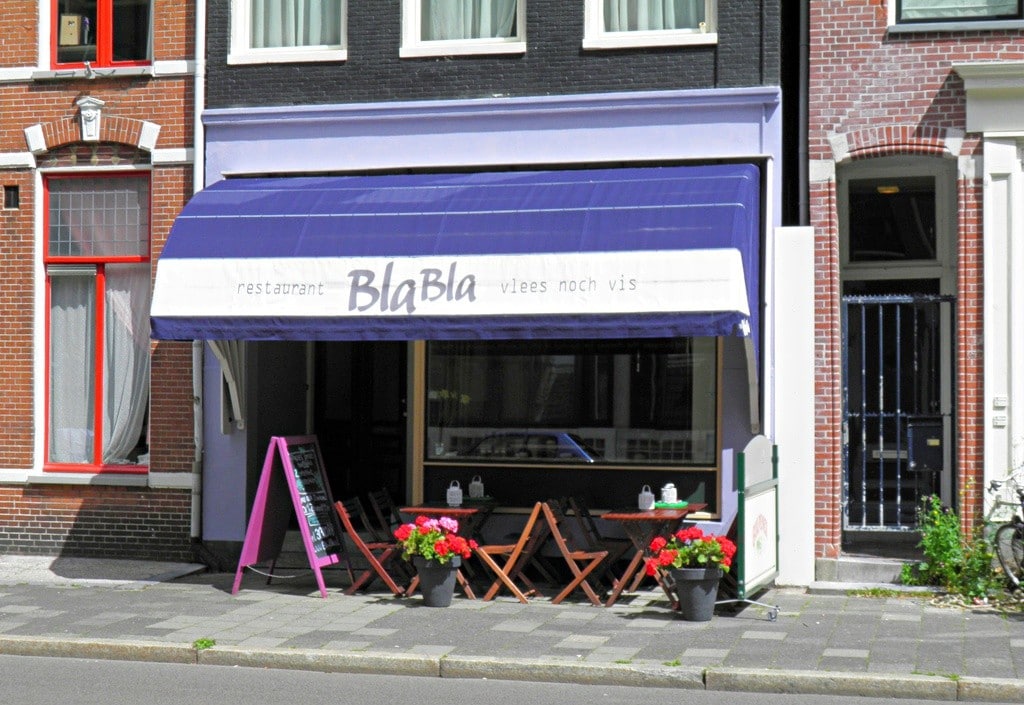 The eldest vegetarian restaurant in the city is BlaBla. It not only serves vegetarian but also began offering vegan food due to client demand. While the main courses always include cheese or yogurt in them, eating vegan is not a compromise here. The mushroom spring rolls are amazing as are their nutty ‘meat’ball pies. 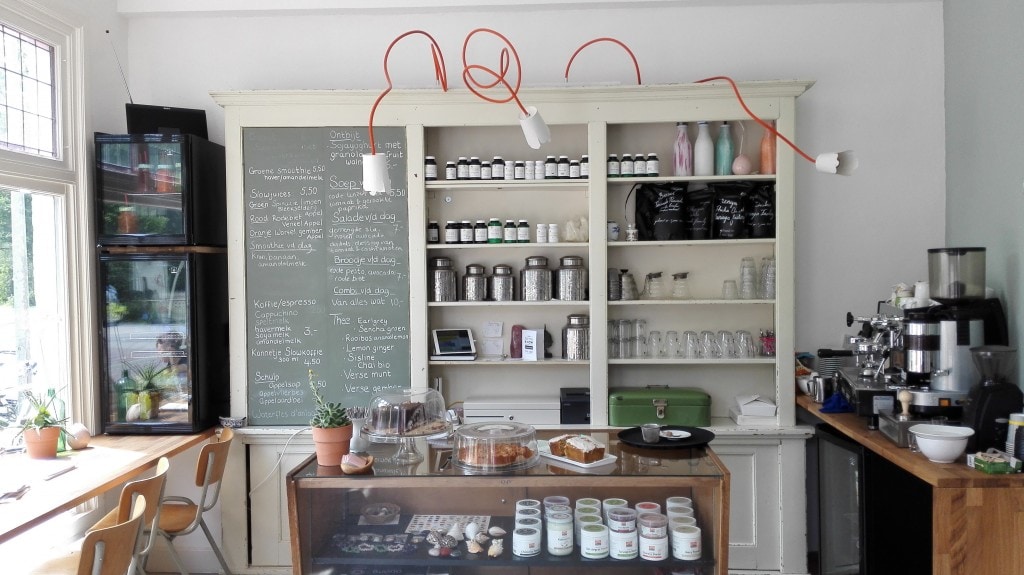 In spring of 2015 the first 100% vegan cafe, Anat, opened right next to Groningen’s most beautiful (inner) city park Noorderplantsoen.

Anat is both the name of the cafe and the name of the owner. Even though she wasn’t a vegan herself, this nutritionist was really into healthy food and wanted a place where she could actually have a guilt-free lunch or dessert.

Anat serves breakfast, lunch, cakes, coffee, and juices. Everything on the menu is homemade. For lunch they offer a daily soup, freshly made bread and topping, and seasonable vegetable salad. 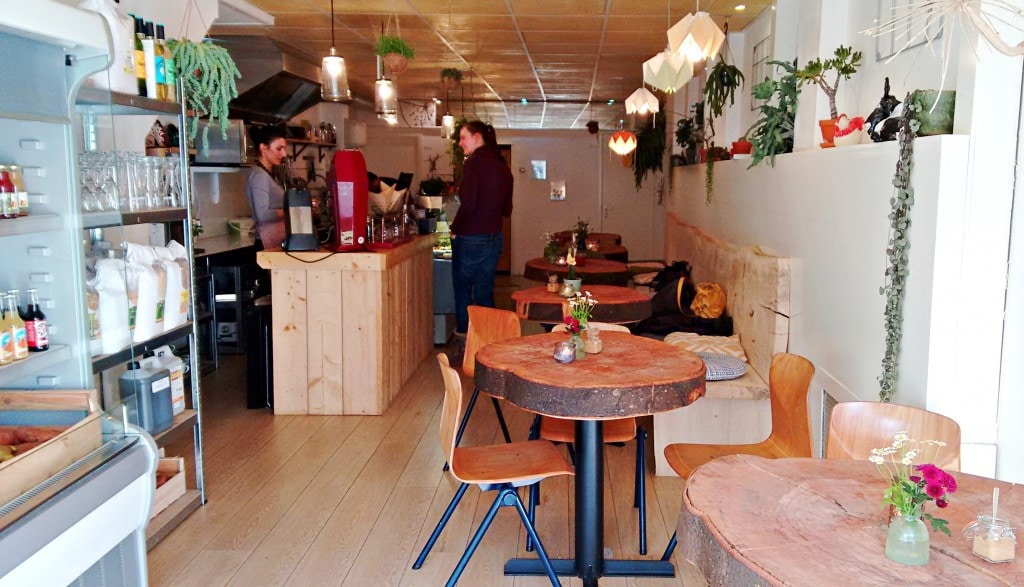 A couple of months after Anat opened, another 100% vegan spot popped up De Herbivoor cafe and salad bar serves coffee and cake, lunch, and on some evenings also dinner. The fruits and vegetables are 100% organic and fresh and everything is prepared in front of you. The menu can change daily and is always seasonal. Tip: Their burgers are amazing and while prices are quite high, you really get what you pay for: a fresh, organic and filling lunch.

Restaurants with Vegan Options in Groningen 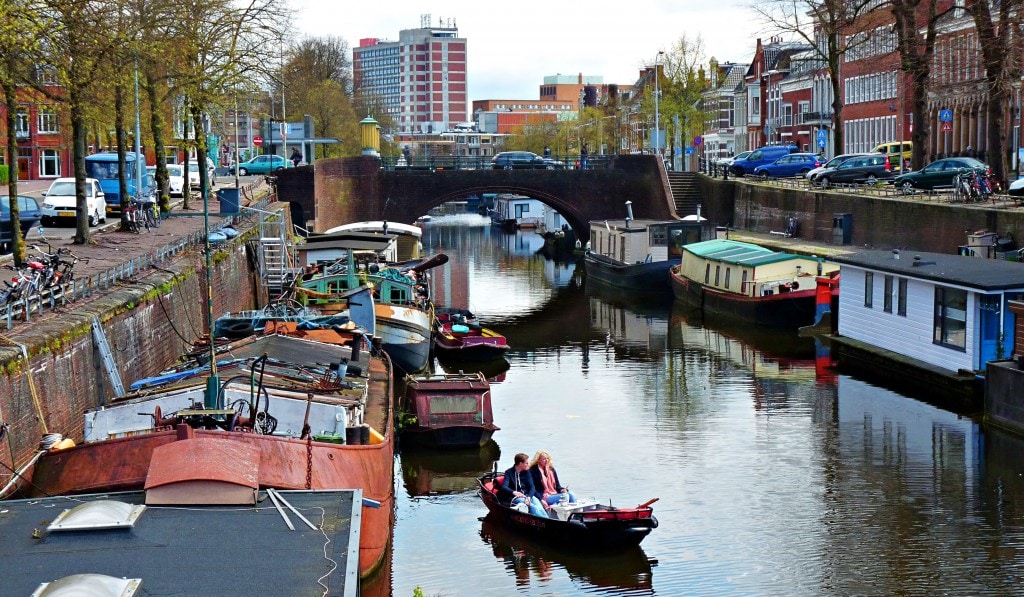 If you’re dining out with carnivorous friends, be it breakfast, lunch or dinner; the best spots that are also suitable for vegans are Pernikkel, The Pool and Concerthuis. All three restaurants cater to meat eaters, vegetarians, and vegans.

Pernikkel and Concerthuis always have food marked vegan on the menu and are willing to veganize other items if you ask. They also offer plant-based milk (as do most restaurants and cafes in Groningen).

At the end of 2016 a new restaurant opened its doors. De Oude Gasfabriek (The old gas factory) offering a lot of vegan choices for both lunch and dinner. We haven’t been yet, but we hear it’s really good. 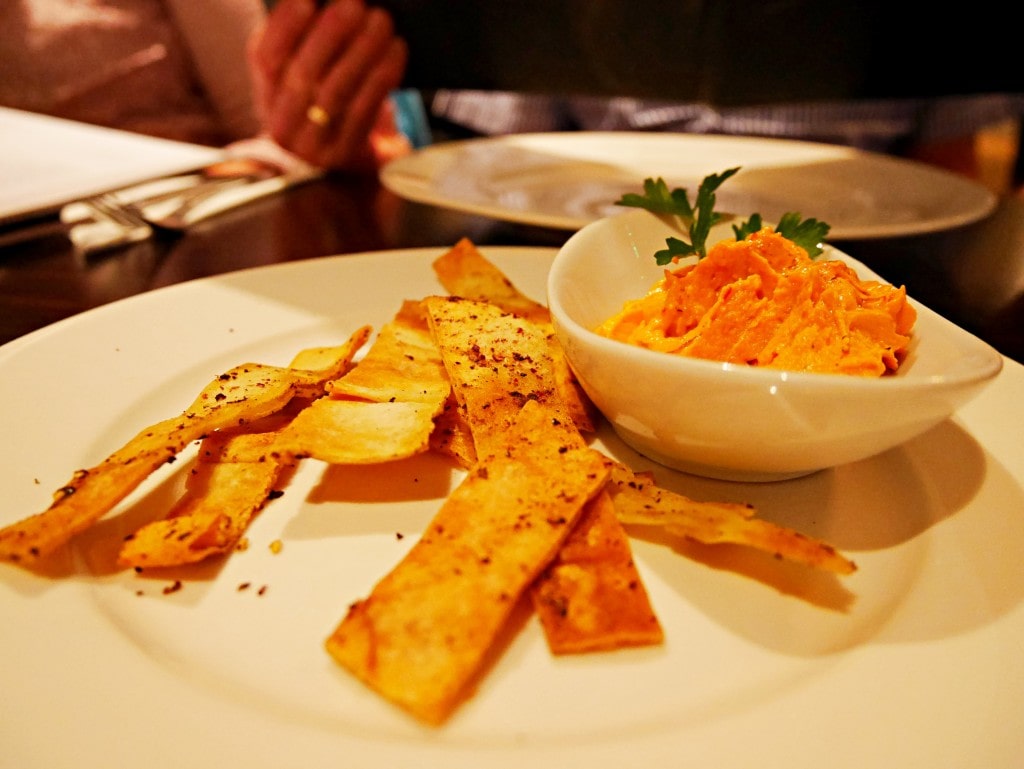 If you’re into foreign kitchens, our favorites are definitely Fatoush (Lebanese and no need to call in advance, they are prepared for vegans), Kohinoor (Indian Cuisine and definitely suitable), Thai Jasmine (Thai food is served with special curry mixes for vegetarians and vegans without the use of fish) and Javaans Eetcafé (Indonesian food).

The Best Vegan Cakes in Groningen 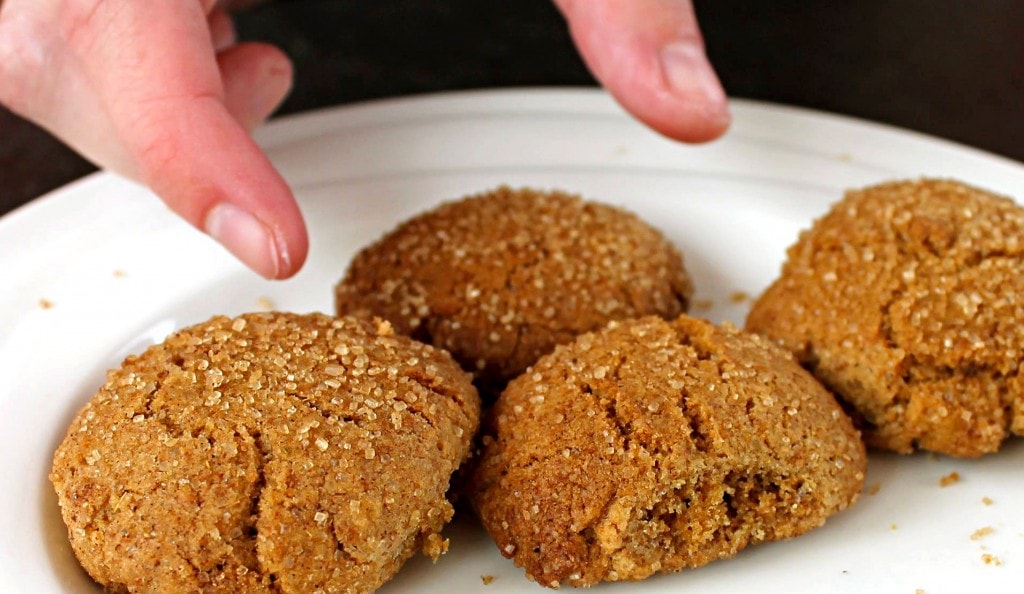 We are both very much into specialty coffees and cake. So where should one go for the best vegan desserts in Groningen?

Feel Good in the Oude Kijk in ‘t Jatstraat will definitely be a good choice as their almost daily changing cake is always quite healthy, tasteful and vegan. They also offer vegan breakfast and lunch options and have great vegan coffees (try the coconut latte either hot or cold or a curcuma latte.

Right next door to Feel Good is is Bij Britta; our favorite. The lady of the houses makes amazing cakes and she always has one or two vegan options. They also have a lovely homemade spicy chai latte.

Both PS and MasMas also offer vegan sweets most of the time and are also located in the same street.

Vegan Shopping and Groceries in Groningen 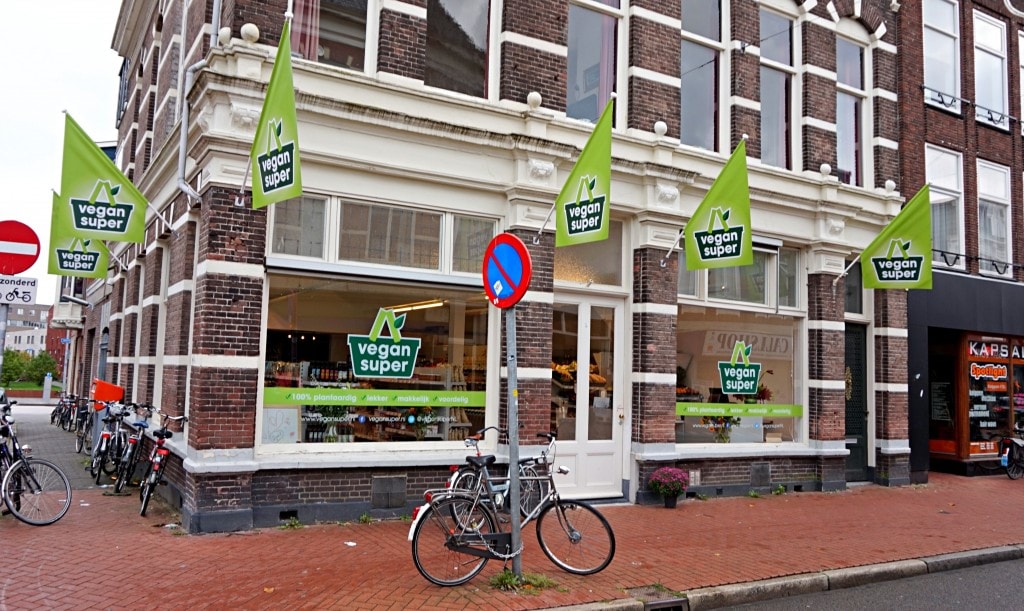 When looking for vegan food, the best place to shop is definitely the newly opened (October 2016) VeganSuper in the Nieuwe Ebbingestraat.

Not anywhere near the VeganSuper? There are two branches of Ekoplaza (an organic supermarket) in Groningen (and one in Haren, which is pretty close) which sells a lot of vegan stuff, 3 ‘nature’ stores like De Nieuweweg Weg, and a few branches of Gezond & Wel and Holland & Barrett which also stock vegan food.

Oriental, a huge Asian supermarket, is also really well suited for vegans with lots of different types of tofu, jackfruit, canned faux duck, and the most diverse choice in exotic veggies and fruit.

Even the local supermarkets probably have some good vegan stuff in the faux meats, plant-based milk, and yogurt departments.

Jumbo sells vegan cheese by Wilmersburger and they offer some soy ice cream or Grunnschnabel at Albert Heijn (which is amazing coconut based ice cream in a large range of flavors. Do try when you’re here.

We hope you’ll have an amazing time in Groningen if you decide to visit! 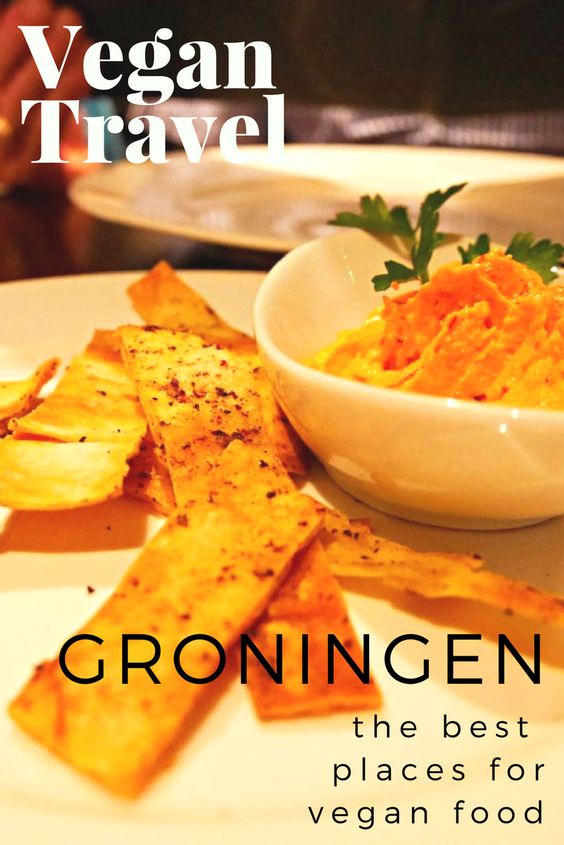 About Anneloes and Janet 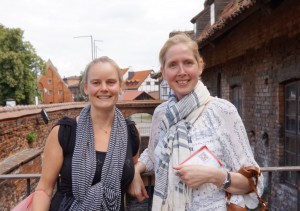 Not So Stuffy is a Dutch (and English) veggie travel blog by Anneloes and Janet. They both live in Groningen, The Netherlands and are always on the lookout for food, veggie food that is. They love to travel and live their lives in a mild eco-friendly way. On their blog they share restaurant tips, recipes, travel adventures, fair and sustainable living ideas and personal thoughts. They also host vegan potlucks, a veggie living room restaurant, they organize events for bloggers and give the occasional workshop.

Note: All photos, unless otherwise noted, are accredited to Not So Stuffy.

Also Land van Kokanje in Groningen has good vegetarian en vegan food. They have the famous Dutch weed burger! And also vegan pies. Check it out!