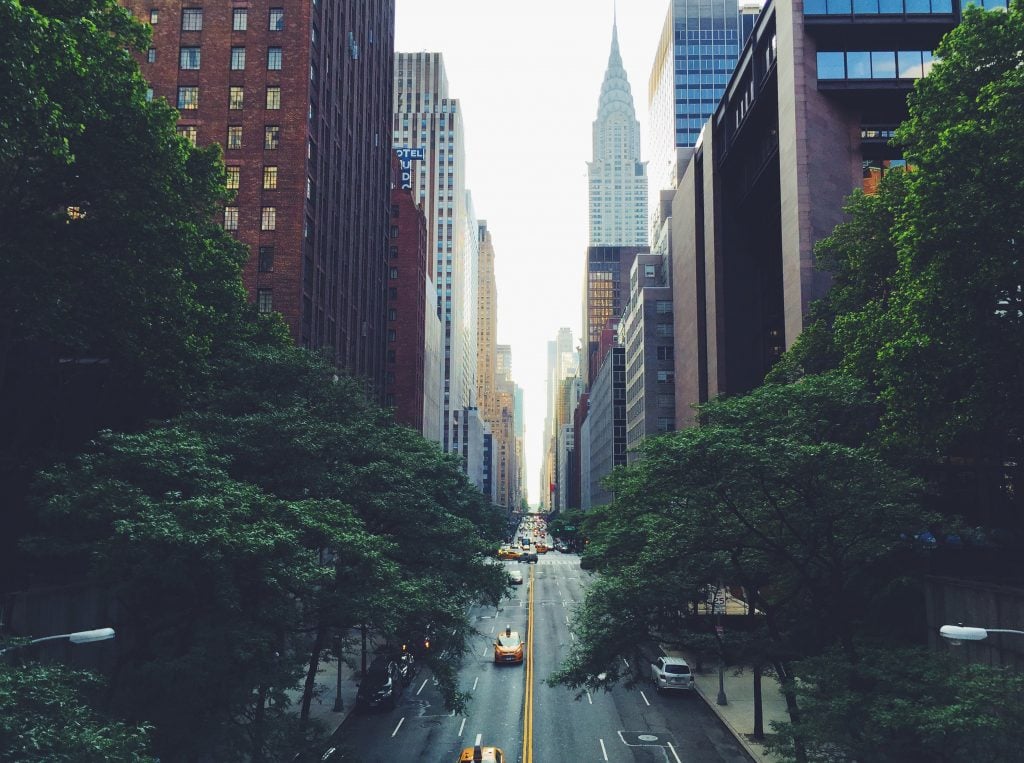 I recently returned to the Big Apple for a few days. I made it my personal mission to eat as much of the best vegan food in New York City as I could fit into my belly.

You see, when I lived in New York City in the past I wasn’t vegan. So in some ways this trip back was like visiting a completely new city full of exciting vegan dining options.

After a lot of research and suggestions from friends, I narrowed the choices down to a handful of spots. My whirlwind tour of NYC (mostly Brooklyn) was a culinary treat that allowed me to sample amazing vegan pizza, delicious vegan burgers, falafel, vegan donuts, vegan diner food, and even vegan fried pickles.

I ended up departing from the New York feeling accomplished and looking forward to the day I would return to try even more delectable vegan delights. 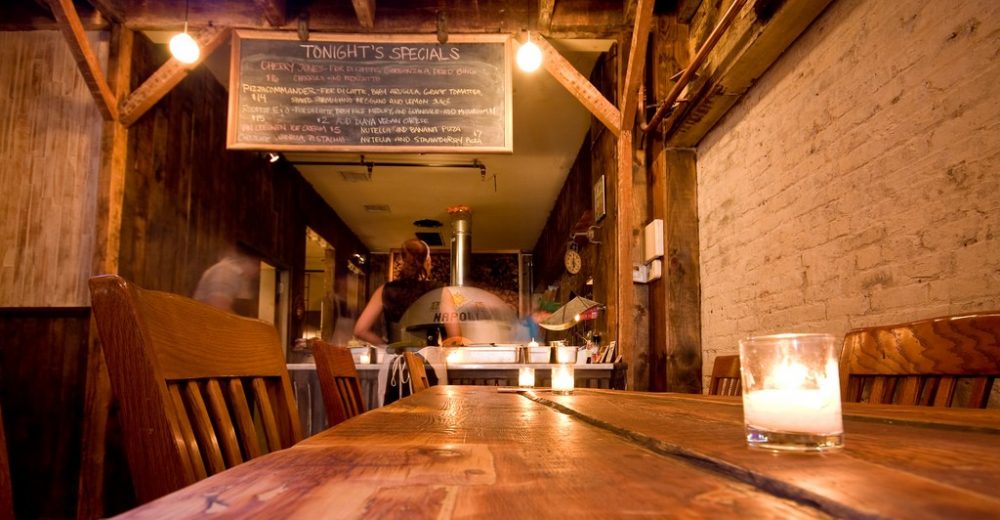 Paulie Gee’s, Wednesday, 6pm by Garrett Ziegler is Licensed Under CC by 2.0

What would a visit to New York City be without pizza?

I watched the below video a few days before I was back in Brooklyn and knew I had try the vegan pizza at Paulie Gee’s. I wasn’t disappointed.

The Ricotta da Vegan pie hit all the right marks as far as good pizza goes. The crust was thin and chewy with just the right amount of burnt bits from the super hot wood burning oven it was baked in. The sauce was subtly tangy and the house made vegan sausage was perfection.

I’ve tried a lot of vegan sausages in the last few years and this one is one of the best. Texture and flavor-wise it was very close to what I remember Italian sausage to taste like. The only noticeable difference was the lack of oiliness, which in my opinion, was a good thing. “Red, White and Greenpeace (vegan)” by Robyn Lee is licensed under CC BY 2.0

And the cheese…glorious creamy, vegan cashew ricotta cheese. My only complaint is it isn’t sold by the tub as a take away item. 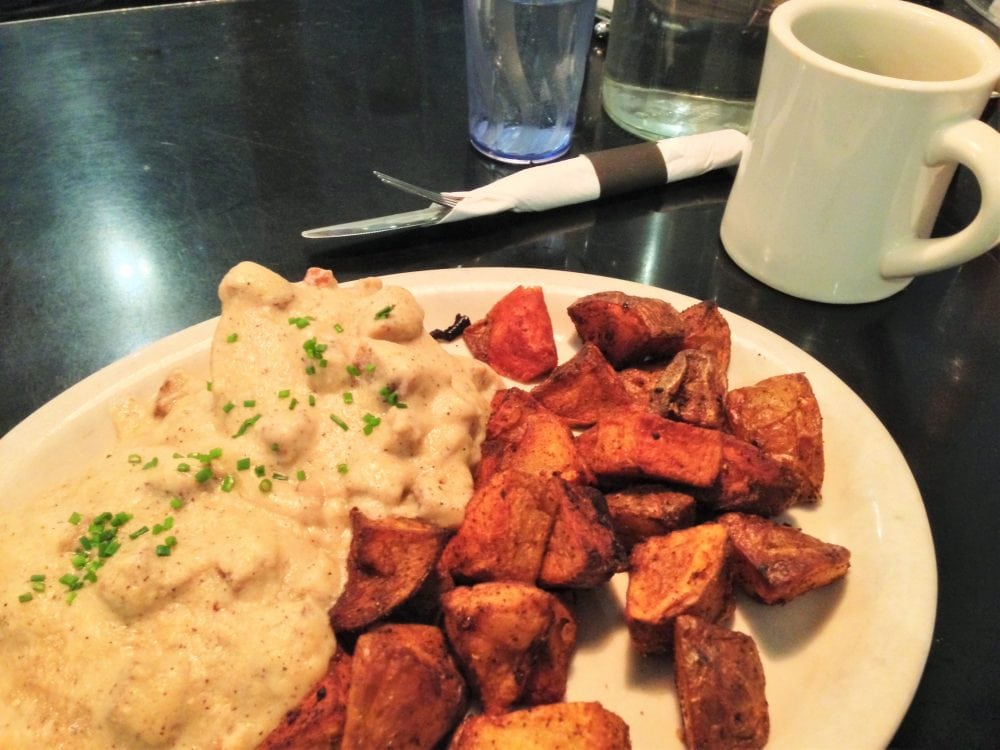 I’m sort of obsessed with diners. I have a think for movie scenes shot in diners (think Reservoir Dogs, Goodfellas, and Mullholland Drive), I love Hopper’s Nighthawks painting, I spent many a late night in diners back in college, and I would even someday like to own a vegan diner.

So, on a blustery weekday afternoon I headed to the all vegan Champs Diner in Williamsburg with a friend to immerse myself fully in a diner experience for the first time in years. We sat at the diner’s counter, since all the booths were taken up by various tattooed hipsters.

The menu had everything you might expect. From burgers and shakes, to tofu scramble, “eggs” Benedict, breakfast burritos, pancakes, and even Chicken n’ Waffles.

After a thorough examination of the menu I chose the Biscuits & Country Gravy which came with house-made biscuits, soysage, gravy, and homefries.

The biscuits were tender and buttery, the gravy creamy, peppery, and spicy with chewy chunks of faux meat. The dish, aside from the sub-par home fries, was fantastic. It was a real throwback to the country biscuits and gravy I grew up eating in the south. 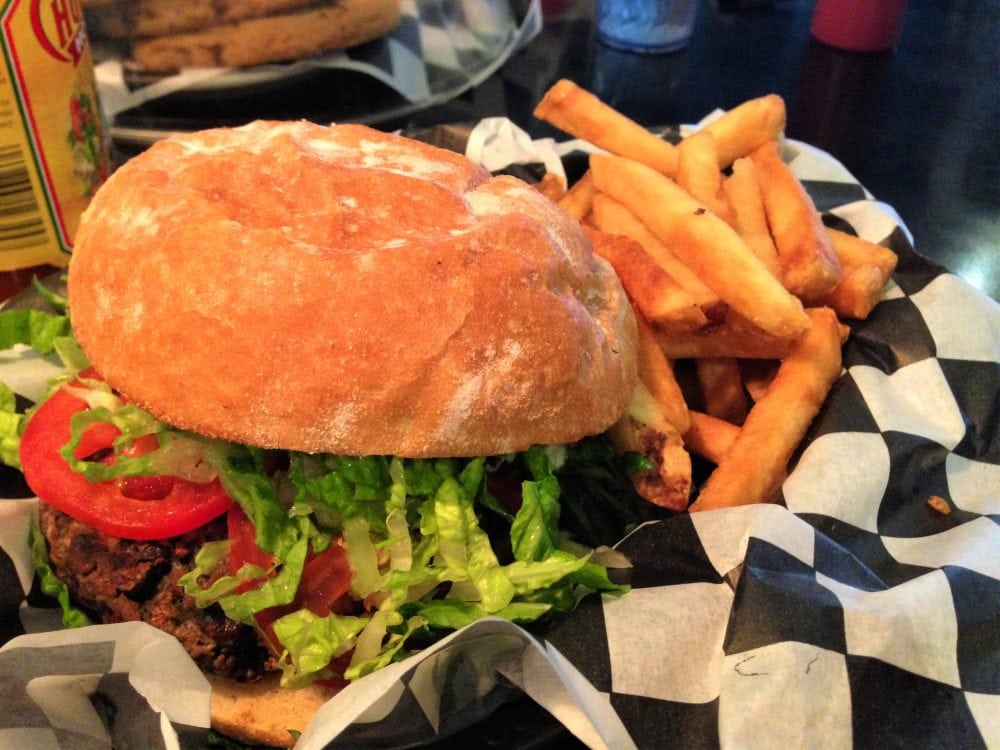 My friend ordered the Black Bean Burger that came topped with lettuce, tomato, and guacamole and served with fries. While he enjoyed the burger, I found the patty to be a bit pasty and flavorless. The fries were, however, fantastic.

Though I can’t say that all of the food I tried at Champs was great, I’d did love the atmosphere and friendly staff, and look forward to visiting again on my next trip to Brooklyn. 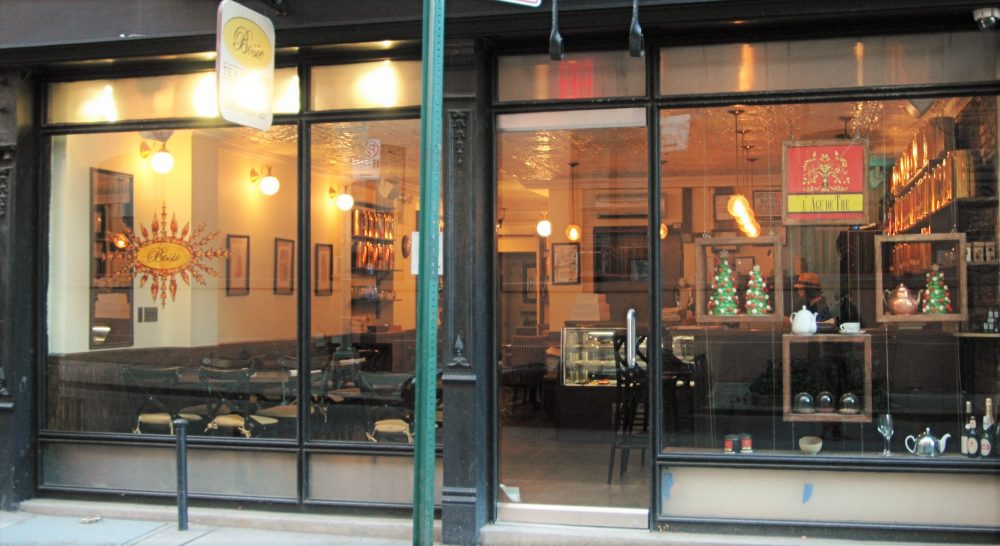 Bosie Tea Parlor is one of the few restaurants I would travel into Manhattan for when I was living in Brooklyn. With about 100 custom blended teas on offer, excellent music, friendly staff, and delicious food, it is a place I spent many, many hours in before I left NYC to travel. It’s the perfect place to go on a cold winter day, order a pot (or 3) of fancy tea, and delve into a good book or chat with a friend for hours.

When I paid my old haunt a visit, I was pleasantly surprised to see several vegan dishes added to the food menu. Though not an easy choise, I decided on the Roasted Cauliflower. The cauliflower was cooked to a crispy perfection and slathered with a zesty, gooey, garlicky, house made cashew ‘cheese’ sauce. The wintry dish was balanced with a fresh, crisp green salad tossed in a tangy vinaigrette. 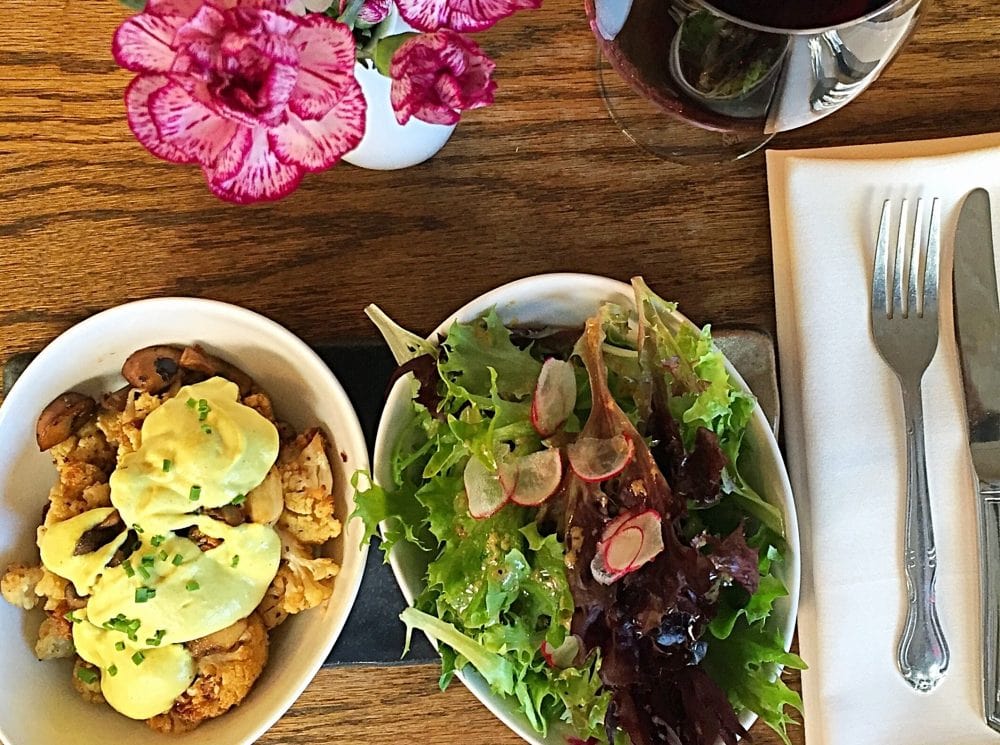 Other vegan menu items you should try include the avocado toast, tofu panini, quinoa salad, and veggie burger (minus the bun). Also, be sure to try some of Bosie’s amazing tea…it is a tea parlor after all! 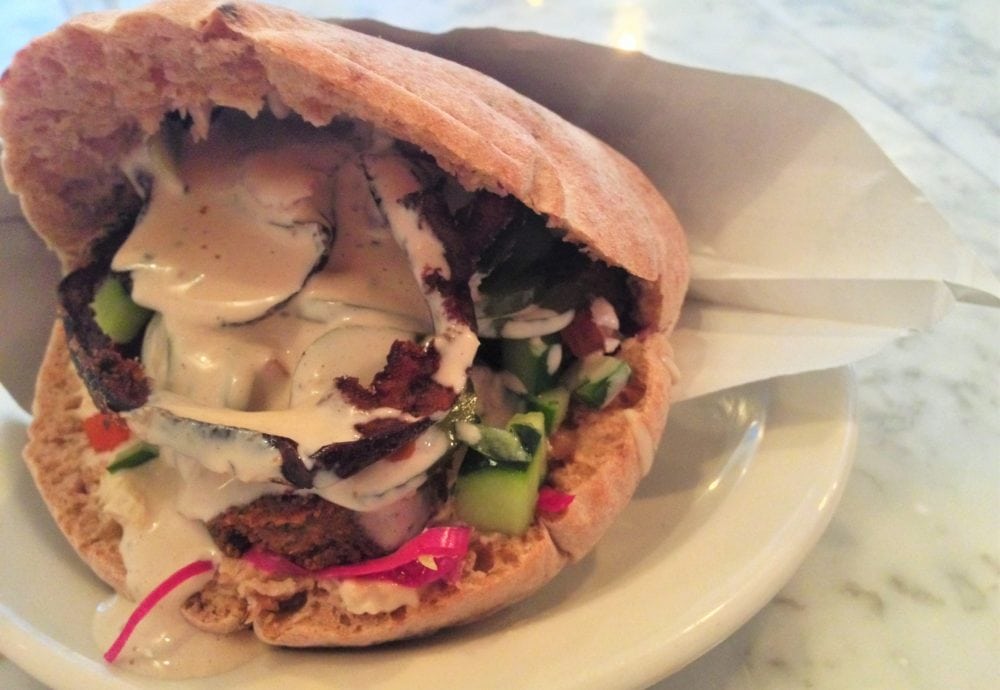 Batata Pita Bar is a small restaurant in the neighborhood of Kensington (which you’ve never heard of) Brooklyn. The restaurant offers a variety of menu items but I chose to have the falafel sandwich. Batata offers not only a traditional falafel but also a sweet potato falafels. These little creamy, crunchy sweet fried balls are stuffed in a white or wheat pita bread and topped with Israeli salad, pickled cabbage, and copious amounts of tahini.  Add a few slices of fried eggplant and it’s the perfect lunch. 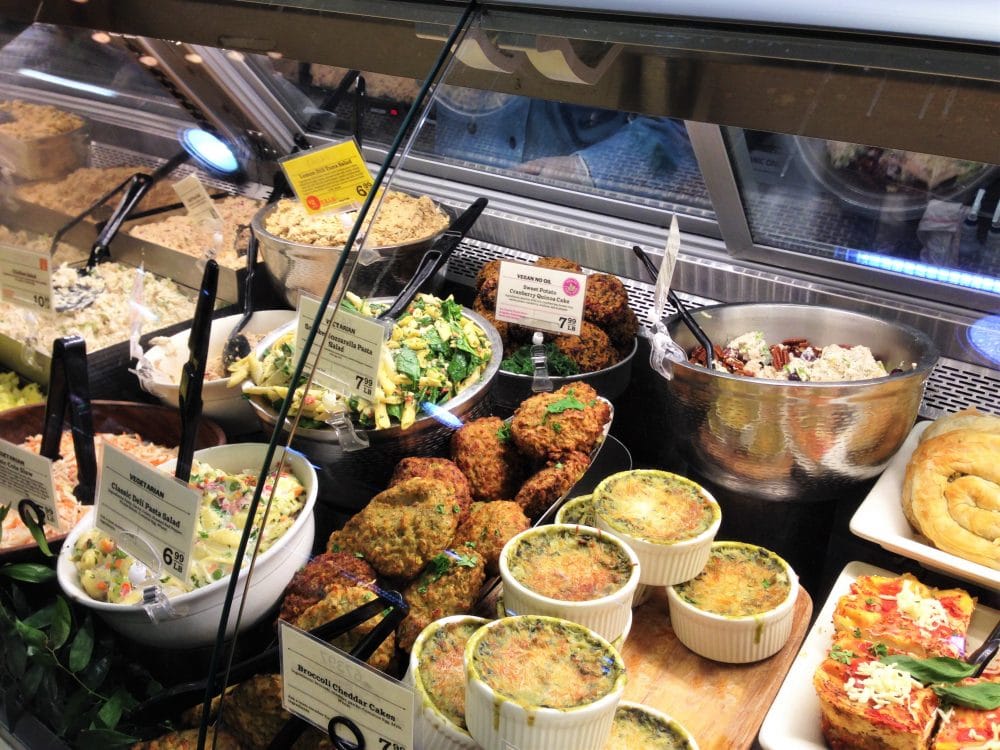 If you’ve ever been to Whole Foods you know that they offer a huge variety of prepared foods, as well as a steam table buffet. There are a number of vegan options in both sections including, pizza, sushi, Indian, Mexican, etc. I’m mentioning this as an option for people visiting NYC on a budget. You get to choose how much of each item you want and don’t have to tip, which can keep your total down considerably. Most Whole Foods have a dining area but if the weather is nice you can always head to a nearby park to enjoy your meal. 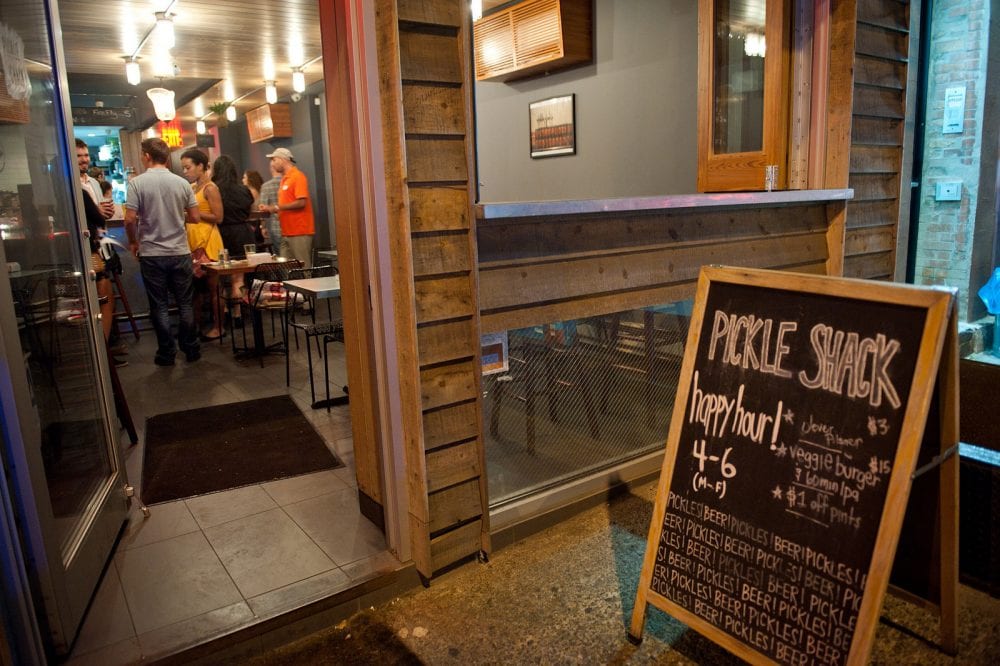 Brine Time at the Pickle Shack! by Yelp Inc. is Licensed Under CC by 2.0

Sadly Pickle Shack has closed since my visit but I feel inclined to include it anyway…given how much I enjoyed eating there.

Pickle Shack was described on Google as a “rustic-slick veggie pub with carefully sourced, pickle-centric eats & seasonal beer”. The menu was almost entirely vegan and their pickles were sourced from Brooklyn Brine, which is right around the corner.

Anyone who craves vegan pub food or has a thing for craft-made pickles and tasty burgers would have loved it.

Despite my love of pickled veggies, and the fact that I grew up in the deep south (fried everything anyone?), I’ve avoided trying fried pickles since they made their debut years ago. I couldn’t find anything appealing about the thought of fried briny, wet vegetables. But as I reviewed the menu when I was there with friends, the idea “When in Rome…” took hold and we decided to give them a shot.

I can’t say I fell in love with the fried pickles but they were pretty damn good. Perfectly coated in just the right amount of crunchy cornmeal crust, the ultra-piquant pickle slices melted in my mouth. It’s not something I’ll order every time I see them on a menu but they were well worth trying. 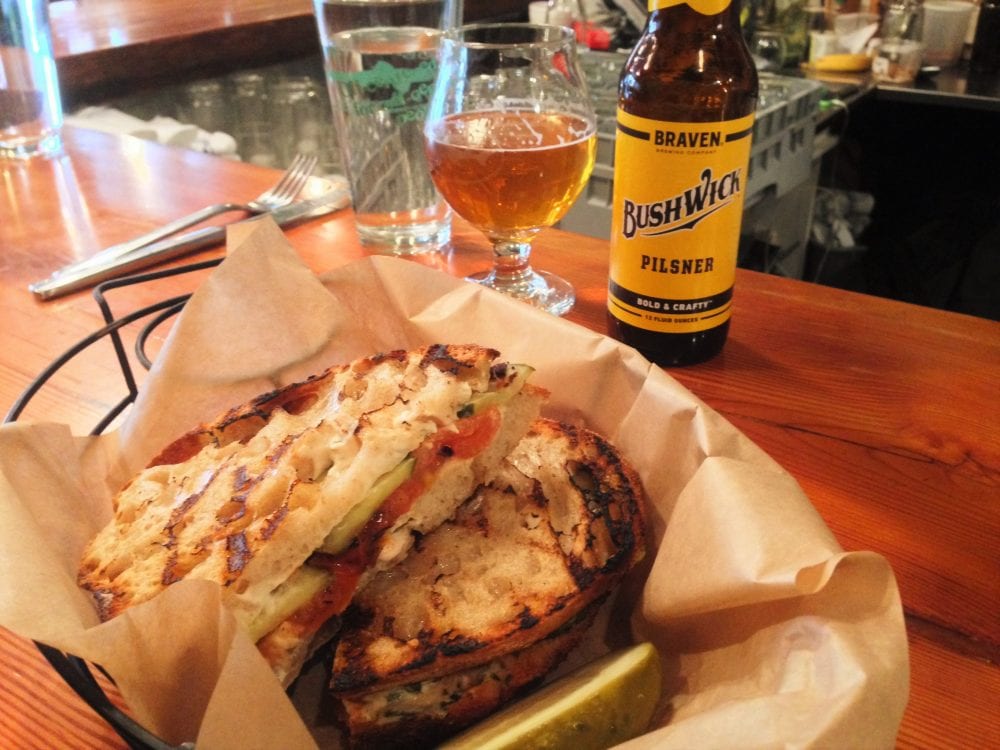 Since I was dining with friends, I was able to try two main dishes, the vegan grilled cheese sandwich and the vegan burger.

The super decadent Sourdough Grilled Cheese Sandwich is a very distant cousin to the afternoon snack your mom might have grilled up for you in a hurry as a kid. Melty, creamy herbed cashew cheese oozed from the edges of the two slices of perfectly grilled sourdough and the savory cheese was balanced with tangy pickle and tomato slices.

Pickle Shack’s vegan burger was one of the best burgers I’ve had to date. The veggie/mushroom patty was served on a dense potato bread and topped with lettuce, ketchup, and vegan mayo. It also, of course, came with a thick cut pickle wedge.

The smokey, hearty patty screamed “Backyard BBQ” and, unlike most vegan burger patties, it held its own against the bun, and didn’t fall apart as I ate it.

It’s really too bad that the The Pickle Shack closed. In my opinion, it was well worth the trip to Gowanus to eat there.

Ready for Dessert? Check out my post on Vegan Donuts in NYC.

Hehehe I have heard of Kensington - one of my best friends lived there so I spent a decent amount of time hanging out there! Never really explored the vegan scene though as it was just around when I was starting to go veg, wish I had known about those sweet potato falafels!

I ate at the Paulie Gee's in Miami recently. In fact, one of our good friends, Jason Weisberg, owns the restaurant. I was amazed at the vegan offerings and have to agree about the sausage. It was so delicious I pleaded for the recipe - to no avail!

Sherry, that's so funny. I wish I had the recipe too. I sat down with Paulie Gee when I was in Brooklyn and he said that the recipe came from one of their dishwashers who brought in some vegan sausage after Thanksgiving. I think he changed a few things but it's funny where inspiration for amazing food comes from in restaurants.

Thanks for including my video!

The pizza and falafel are calling my name! Everything looks so delicious. Great roundup!