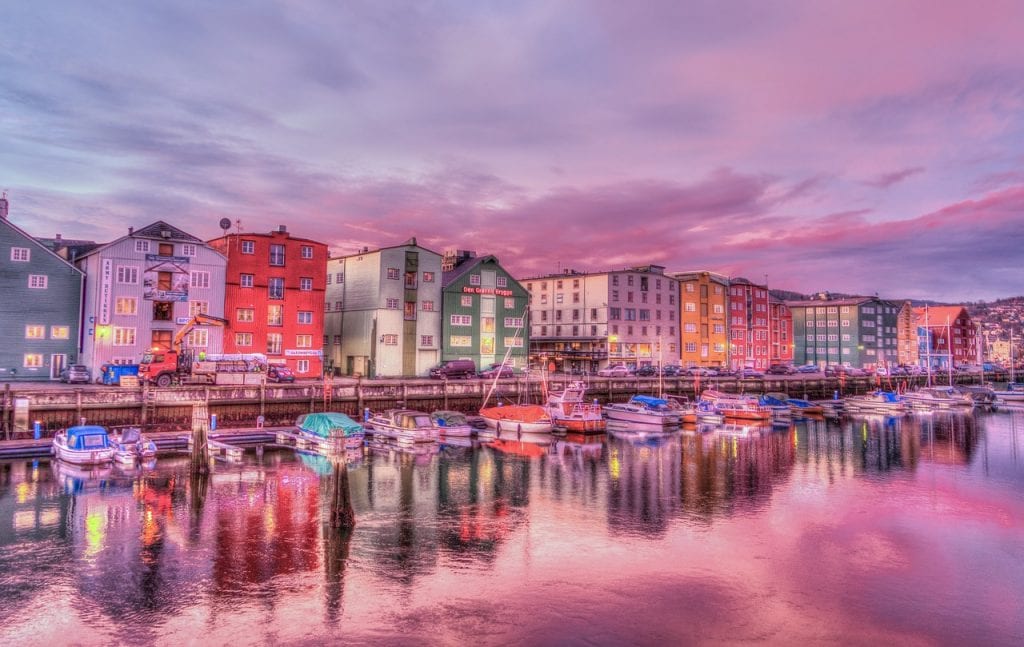 How difficult is it to travel in Scandinavia as a vegan? Our contributor Lauren, recently traveled to Denmark, Sweden, and Norway and spent a good deal of time seeking out delicious vegan food in Copenhagen, Malmo, Stockholm, and Oslo.

Here is Lauren’s tale of Vegan Travel in Scandinavia.

This new year I found myself in an all-too-familiar position: restless and newly laid off. Naturally, I decided it was time for a vacation. In Scandinavia. In January.

With nothing but an affinity for Stieg Larsson’s Millennium series influencing this decision, I packed my bags and boarded a plane, hoping that by splitting my two week trip between Copenhagen, Stockholm, and Oslo I would have plenty of time to enjoy the culture, history, and vegan food each city had to offer. 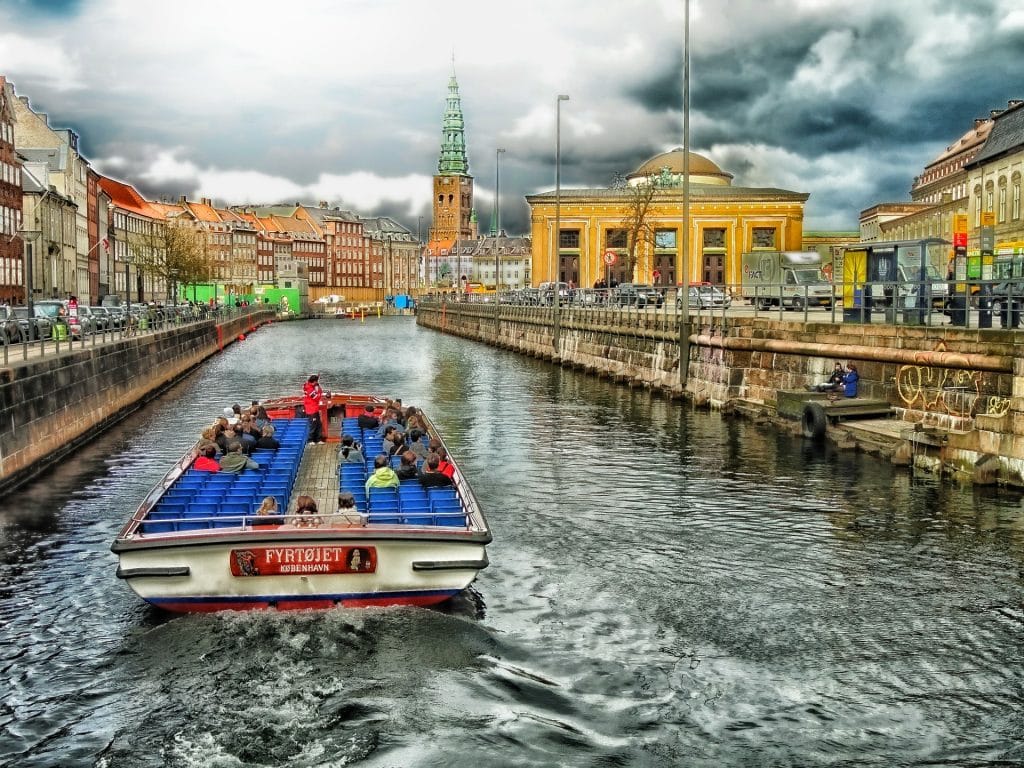 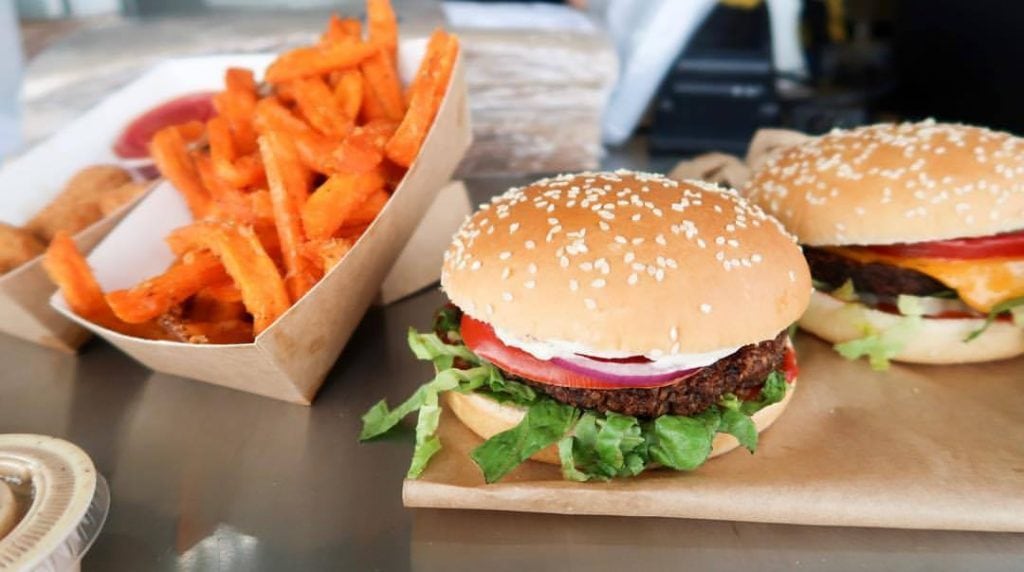 I arrived to Denmark’s capital city weary and in desperate need of a nap, but unable to check into my hostel for another two hours.

A quick check of my surroundings led me a few blocks down the street to GreenBurger, a casual dining spot based off of a local food truck. The entire place was vegan, and the Tease Burger I ordered was absolutely delicious! The staff were helpful and friendly as well, welcoming me to the city and wishing me well on my travels. 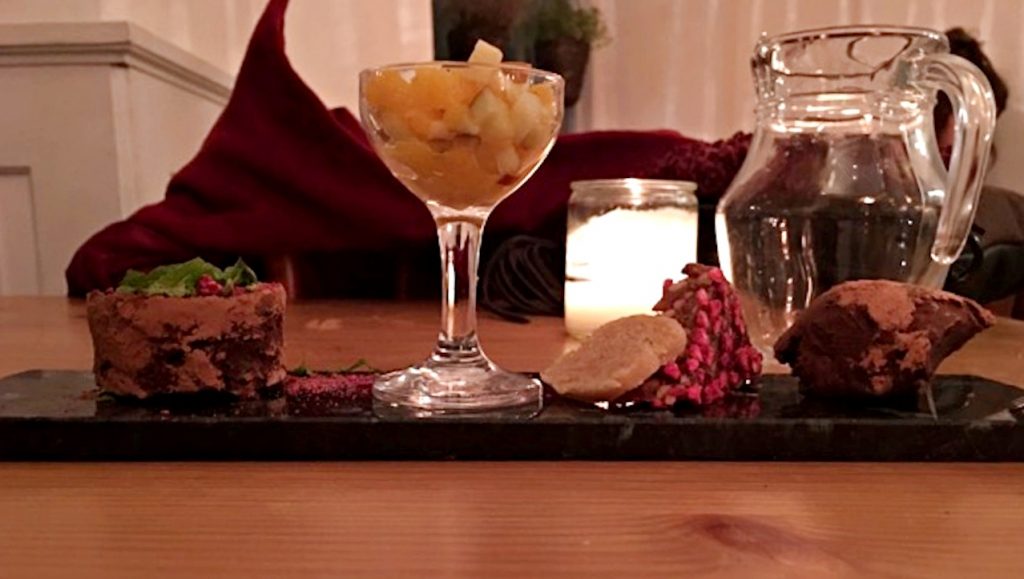 After checking in to my hostel and squeezing in a nap, I hit the pavement to explore more of Copenhagen. I ended up in a cozy restaurant called Urten in Copenhagen’s Latin quarter. The chef was vegan himself, enthusiastic about the lifestyle and his menu (which changes once a month).

My pan-fried gnocchi was so good I ended up ordering the tasting platter for dessert as well. I probably could have guessed this at the time, but in hindsight I can say that this was definitely one of the best meals I had during my trip. 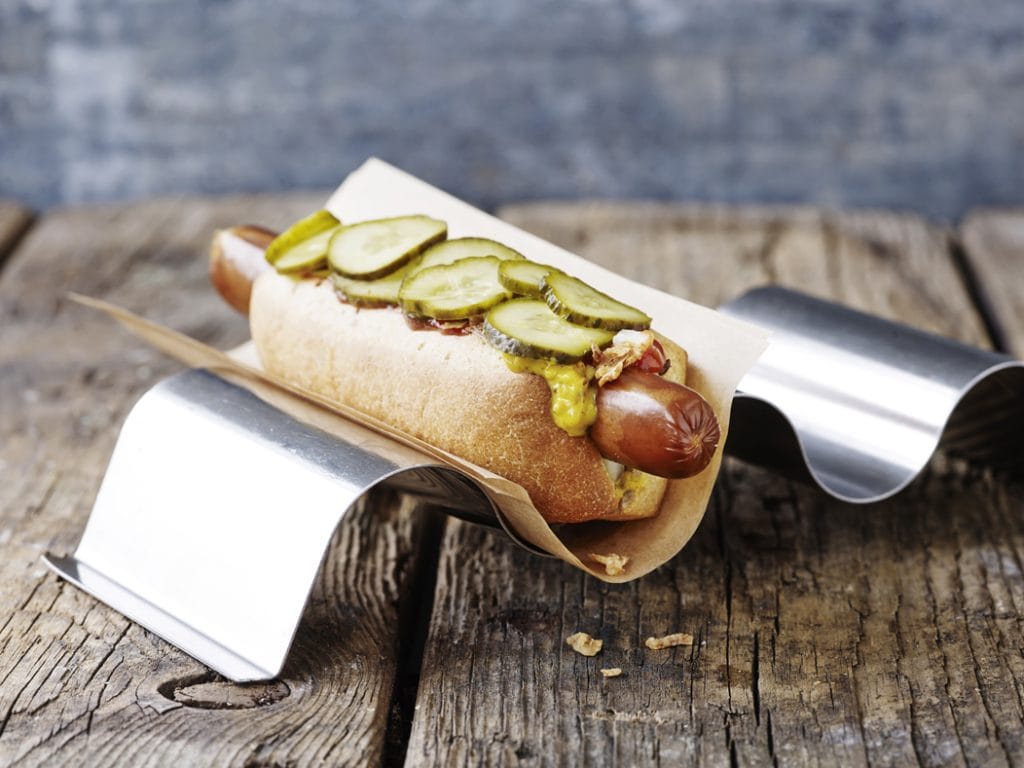 Being vegan often means planning well in advance where you’re going to eat, that way you’re sure to have options available.

This is why I never would have guessed that a Den Økologiske Pølsemand sausage cart parked outside of Rundetaarn would have a vegan tofu dog available! The employee in the cart was also knowledgeable about which toppings were and were not vegan, so I was able to get mine loaded with all of the fixings. I noticed a few different locations of this street cart throughout the city as well. 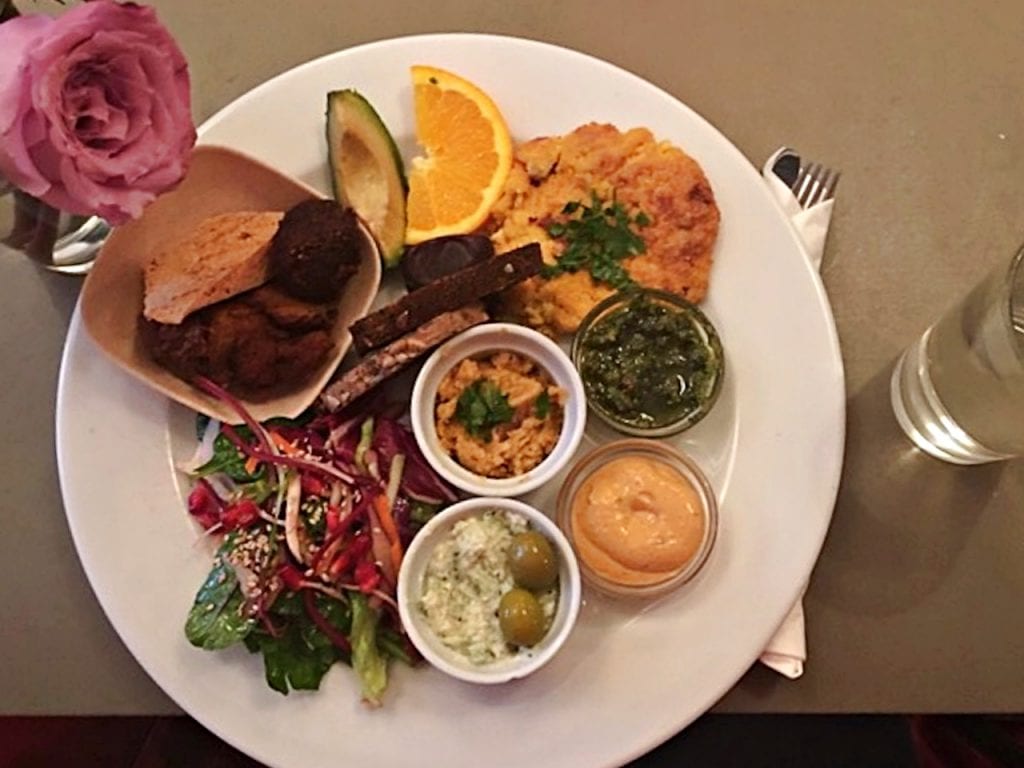 Sunday morning found me craving — what else? — brunch. Luckily, this appears to be a universal language. Café Ñ was absolutely perfect: small, cozy and entirely vegan! Although the menu was in Danish, I put in an order for ‘brunch plate’ and was not disappointed. I got a wide variety of options, all of which were tasty and plant-based. 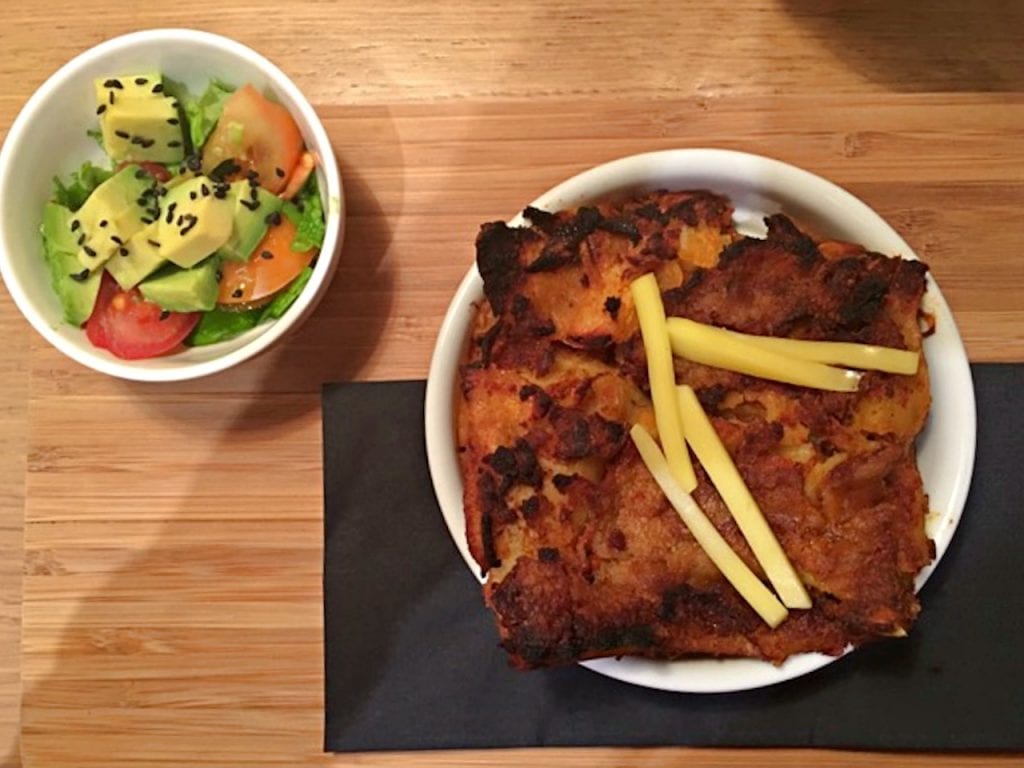 Although cozy eateries are more my style, there is no denying that vegan places have a tendency to be hip and trendy. This was the case at simpleRAW, a centrally located restaurant that serves up vegan food (not all of which is raw), juices and smoothies. The portions were small for what you pay, but truly tasty.

I got a lasagna, which came with an avocado salad, and took home a chocolate banana milkshake, all of which left me extremely satisfied. 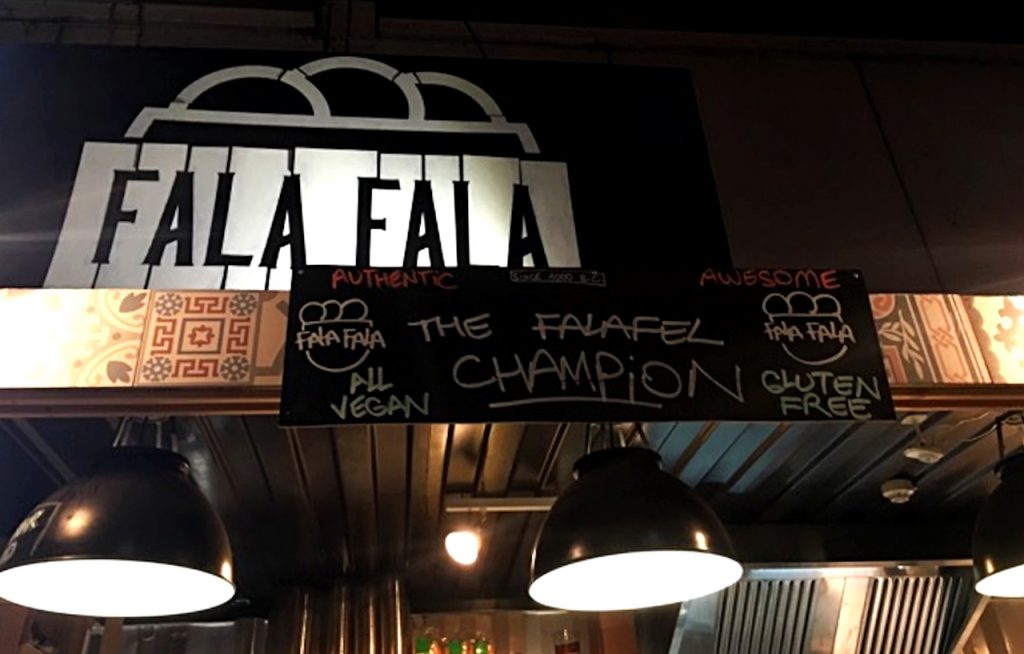 Although many locations offer vegan options, Fala Fala is the only entirely plant-based stall in the Copenhagen Street Food warehouse. They’ve been serving up high-quality falafel since 4,000 B.C. (as per their chalkboard) and have awesome french fries as well! The street food warehouse is located near the iconic Nyhavn, as well as a modern art museum, and is a great spot for a quick lunch. 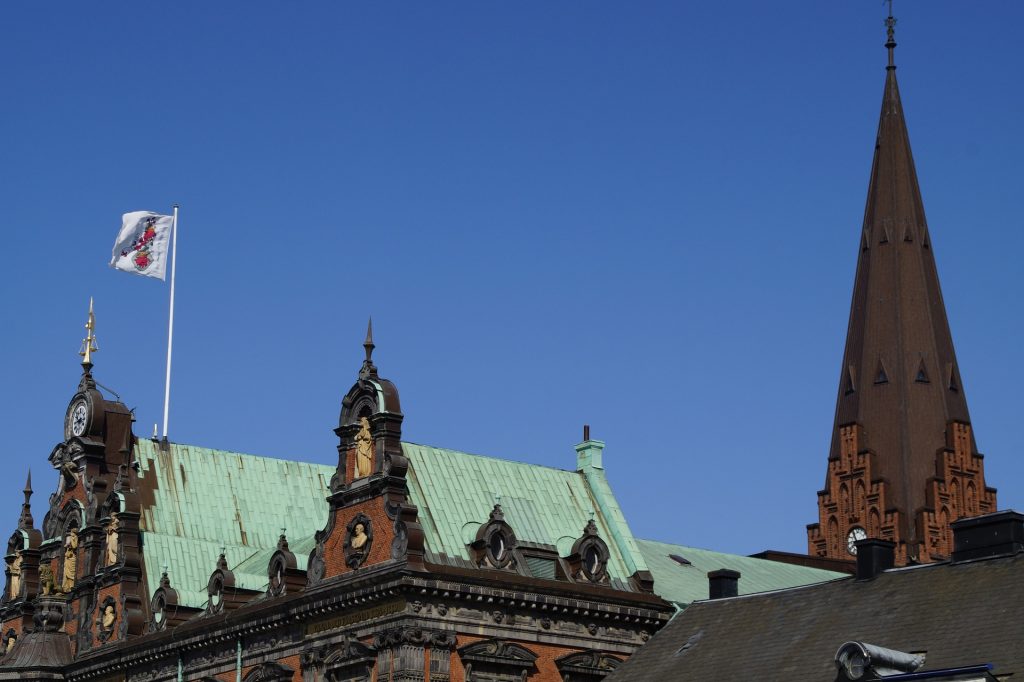 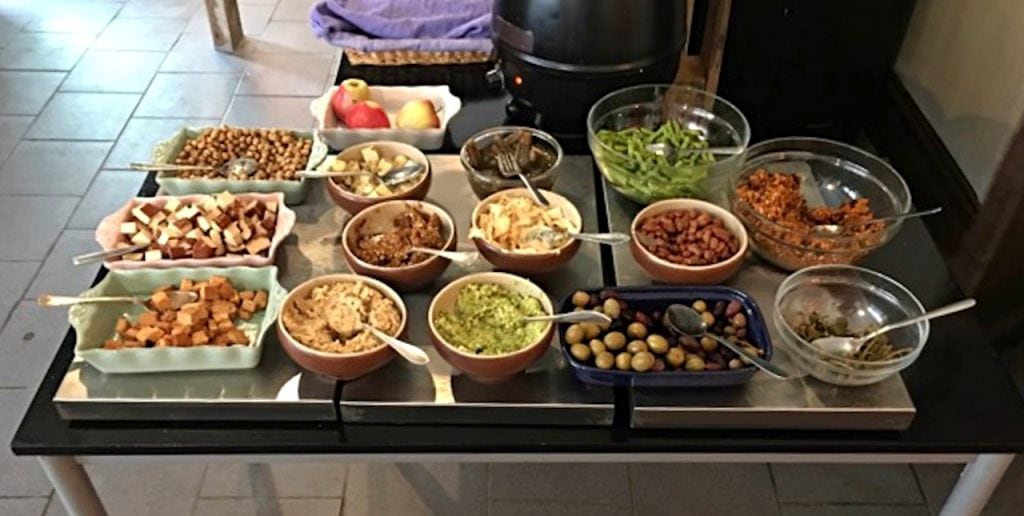 Sometimes you need a vacation from the vacation, you know? I took a day trip to Malmö, and spent my day walking around the city, and showing my appreciation for one of Sweden’s greatest culinary contributions to the world: the smorgasboard.

Kao’s is homey restaurant in Malmö with quirky furniture, a cabinet of board games to play and a delicious vegan buffet! Payment secured the works — soup, salad, main course, coffee/tea… all you can eat! 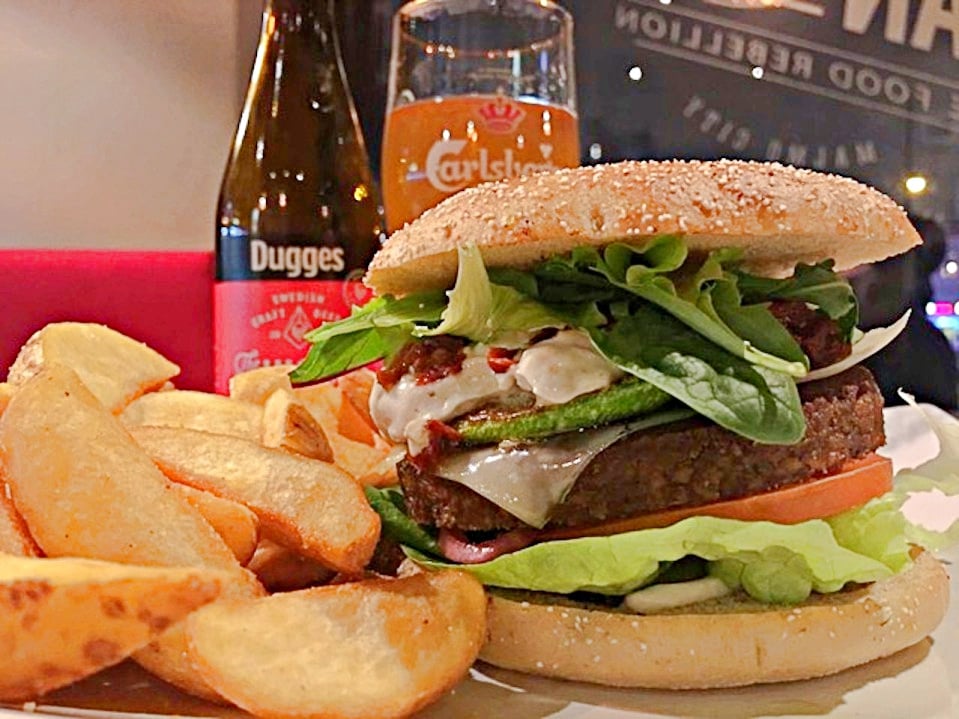 As the name would suggest, Vegan Bar is an entirely vegan bar located in the heart of Malmö. Have you booked your ticket yet? The extremely helpful staff translated the menu into English for me, and I ended up with a crazy delicious burger that had been cooked in whiskey! I know, I’m still not over it. 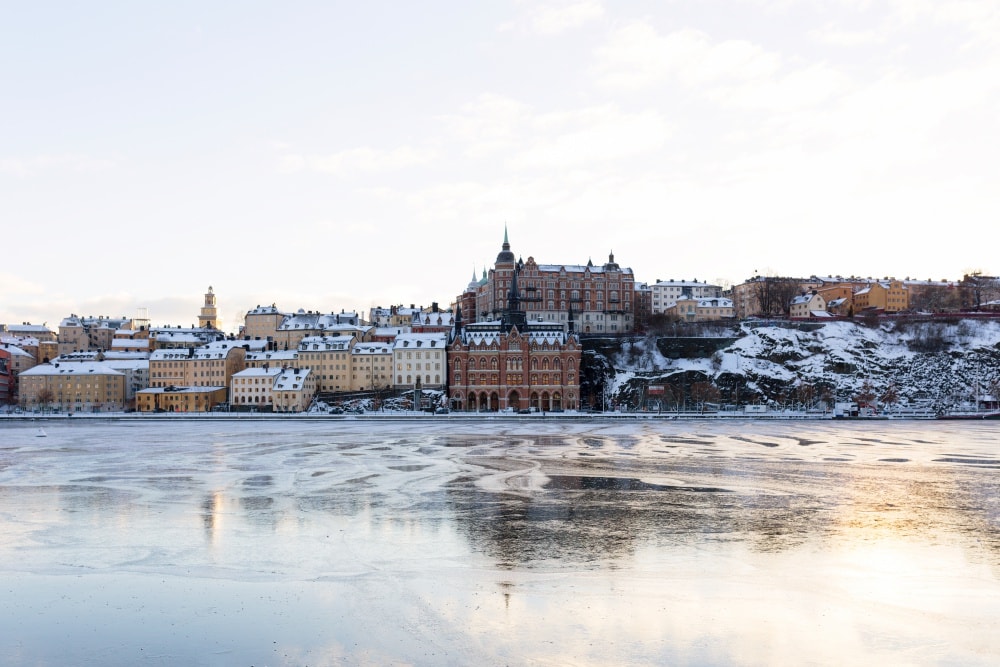 If you’re a tourist Stockholm, you visit Gamla Stan; it’s what you do! So while you’re there, make sure to pop into Hermitage, an all vegetarian restaurant right in Old Town Stockholm. The only non-vegan menu item available when I went was a pizza, but the rest of the buffet was fair game, so I naturally sampled all of it. A group of four people got turned away while I was there because the seating was so limited, so keep this in mind if you’re traveling with friends. 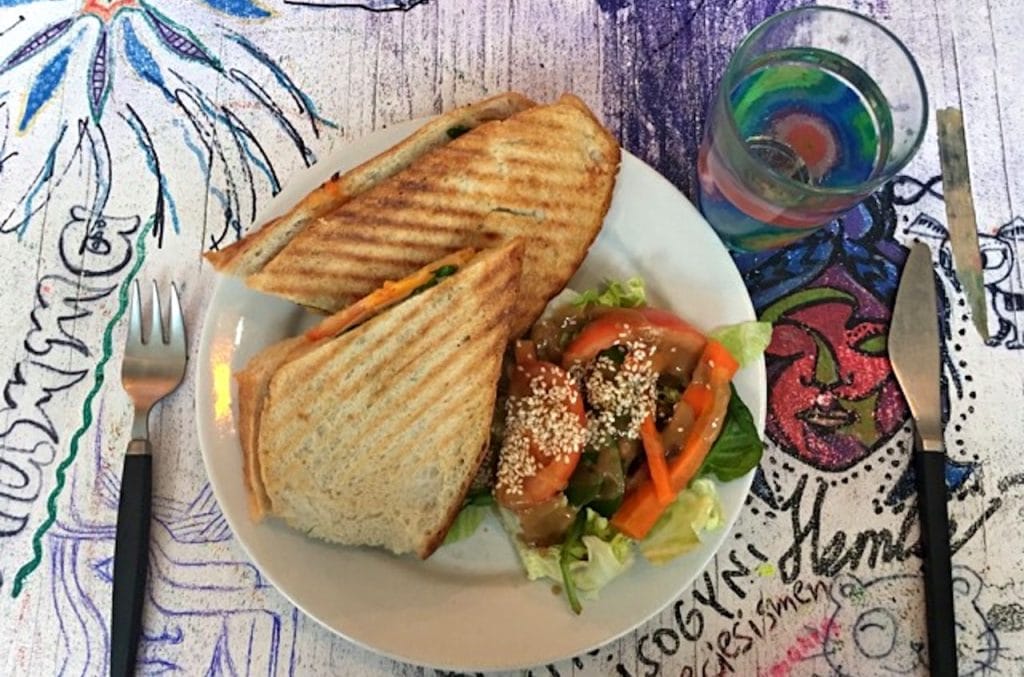 An awesome trend I noticed amongst vegetarian and vegan eateries in Scandinavia was that many of them didn’t limit their message to animals; human rights were at the center of the conversation as well. Femtopia’s philosophy about empowering all living beings — notably women and the LGBTQ+ community — set a really cool vibe for the restaurant. Not to mention their grilled cheese sandwich was completely delicious! 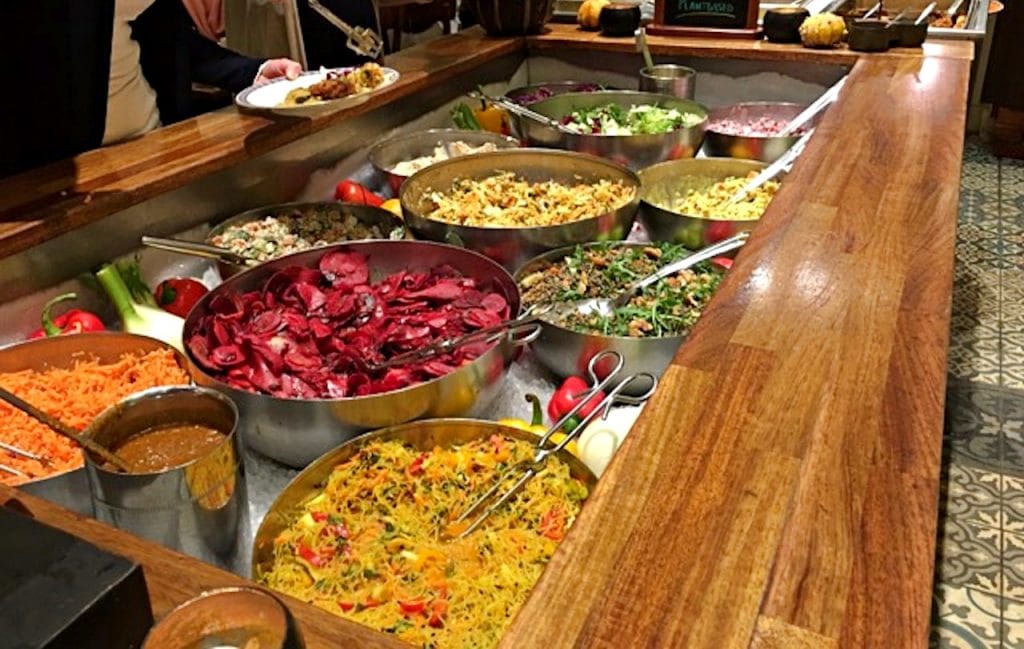 I could gush on and on about Hermans Vegetarian Restaurant and Garden Café, probably for the rest of my life. Everything on the menu sounded and looked incredible, and since it was all served buffet-style, I can confirm that it was. It was incredibly popular, probably due to its gorgeous views out across the harbor and incredible food. The main hot entrees the night I went were lasagna and shepherd’s pie, which the staff rotated as needed. I enjoyed my dinner so much, I even sprung for fika (dessert), which was a berry tart with a warmed vanilla drizzle.

Kafe 44 is, as I previously mentioned, one of those restaurants that focuses on far more than simply animal rights. With a punky vibe, this bookstore/restaurant seemed like it was a great meeting spot for activists from all backgrounds. I noticed plenty of fliers (most in Swedish) for various protests and anti-fascist movements around the shop. Oh, and their nachos were delicious!

If you’re hanging around omnivores who simply can’t take another plant-based dining experience, head on over to Pizzeria Oliven, where not all of the options are vegan but all of the vegan options are delicious. They offer a vegan cheese substitutes so you don’t have to worry about that cheeseless nonsense, but no meat alternatives so be sure to pick a pie that’s veggies only. 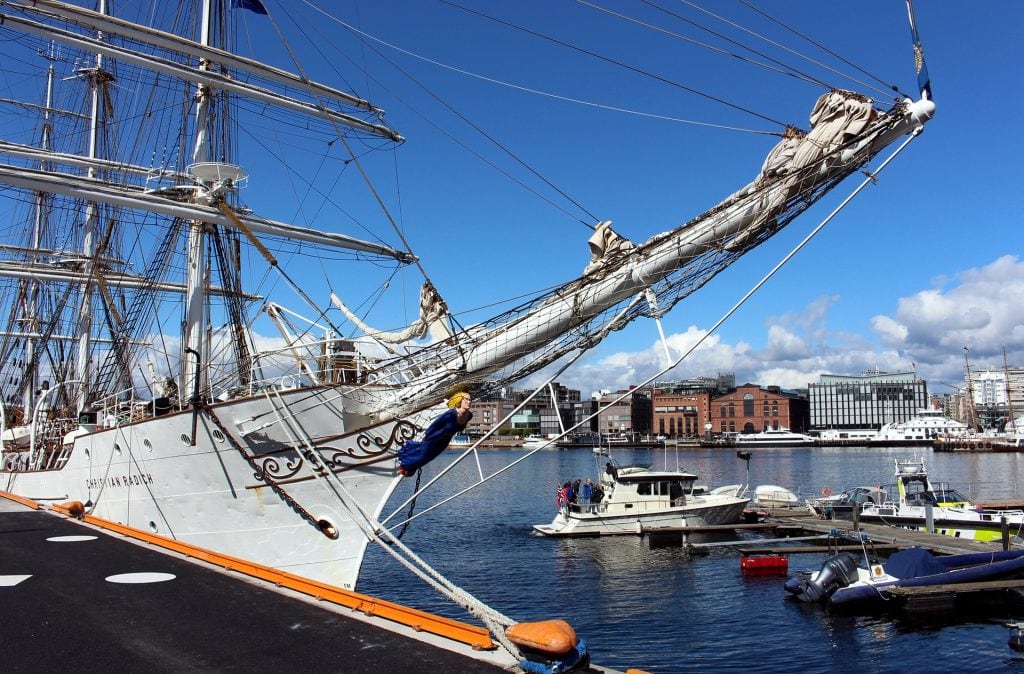 It was a snowy day in Norway, and I took refuge from the cold in the small Funky Fresh Foods café that serves as the dining facility for the Norwegian Center for Design and Architecture. There is counter service with plenty of seating and huge windows overlooking a grassy hill, perfect for people watching! 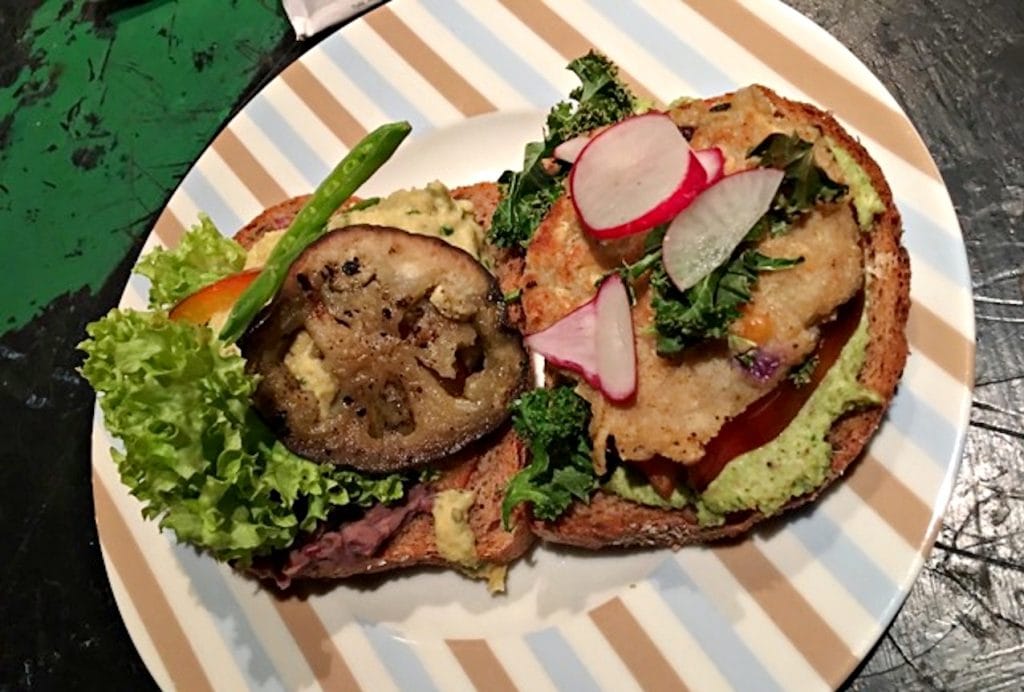 I could tell by it facade that Kafé Blitz was going to be an interesting experience. Its hardcore punk vibe was evident immediately, in both the decor and choice of music. The food was excellent and by far the cheapest meal I ate during my trip. I had two slices of toast with various spreads and toppings for a whopping 20 NOK ($2.30 USD).

Fragrance of the Heart 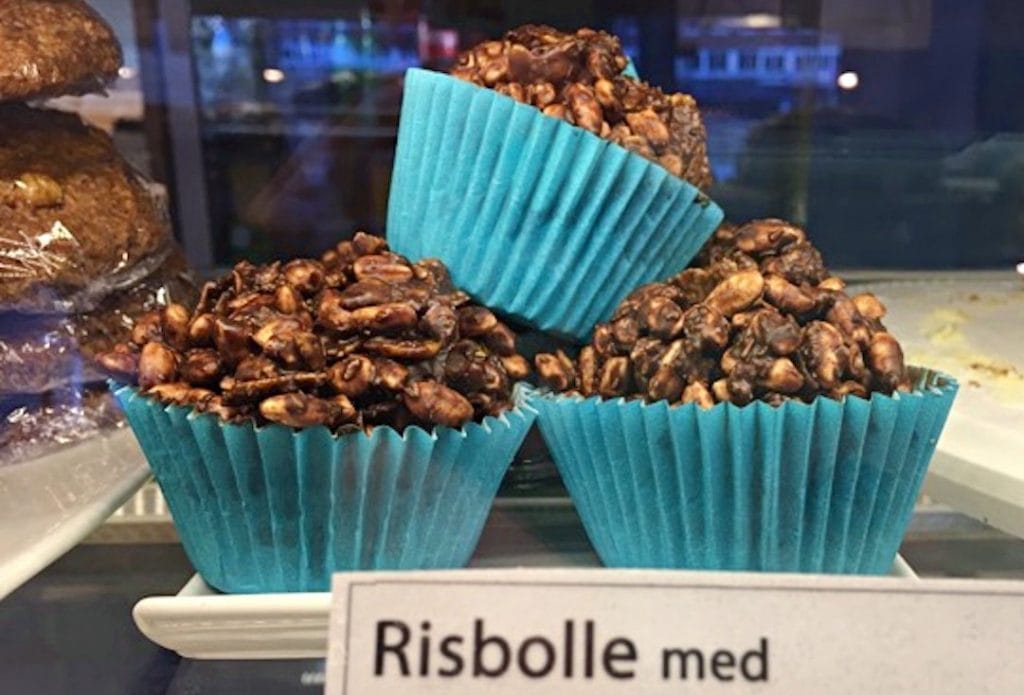 Though they recently opened a new location, I visited the original Fragrance of the Heart that is directly across the street from Oslo’s city hall. All of the vegan options were clearly labeled, and I had a slice of savory vegan pie as well as a crisped rice chocolate ball for dessert.

My time abroad was coming to an end, but I still had one last stop to make on my vegan food tour of Scandinavia. Git Bit is a fairly new, Indian/Norwegian vegan fusion restaurant that serves a wide variety of thalis and pizzas, sizzling (seriously sizzling) platters and naan breads. Since it’s so new, they couldn’t accept my international debit card (Be warned! Bring cash!), but the food was authentic and delicious.

A quick note on traveling throughout Scandinavia before signing off: there are tons of grab-n-go options! Seriously, it takes a vegan eye to notice these things, but most convenience stores (7/11 is a big chain) had clearly labeled vegan wraps or sandwiches available for purchase. These were awesome for long bus or train rides, and really great to see. I would love to see this trend take off stateside! 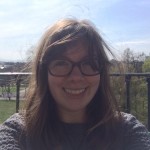 When she’s not busy traveling, you can find Lauren Russell playing pub trivia, appreciating live theater, or spending time with family and friends. She is as passionate about environmentalism and animal rights as she is about her love for Breaking Bad.

Wow, what a great food guide!! Thank you so much! This was really helpful! Cheers from Vienna Julie

Fala Fala is my favorite! Unfortunately Copenhagen Street Food is closed now, I'm still waiting to find out where I can get my Fala Fala fix fulfilled! Great list. Glad you found some tasty treats in Copenhagen and beyond. Cheers from Denmark, Erin

I recommend everyone who's traveling to Norway to download the app called "Vegan Norway". It's a free app that lists all the vegan and vegan-friendly places in the big cities, like Oslo, Bergen, Trondheim and Stavanger. There are detailed descriptions of every place, so that you know what to get, and you can display the places on a map or as a list. Places like restaurants, cafes, shops and fast-food options are displayed.

Great tip! Thanks so much for sharing that with us. :)