Yes, there are a lot of those too!

I thought it might be nice for you if I share my favorite products made right in the Czech Republic that are vegan. It seems like there has been a steady flow of new companies making some killer vegan products after all.

So, here are some of my absolute favorite Vegan Czech food and the companies that make them.

Plus I recently started a video series called American vs Czech Made Vegan Products. Check it out!

Before we dive in…here are a few other articles about the vegan scene in Prague and the Czech Republic:

Patipatti is an organic vegan gelato brand that is based in Plzeň Czech Republic. This cashew based gelato comes in tea and Asian inspired flavors including Matcha, Hojicha, Bourbon Vanilla, Miso Caramel, and Masala Chai.

This is without a doubt the best vegan ice cream I’ve had in the Czech Republic, and probably elsewhere in the world. The cashew, Brazil nut and oat base gives it an uber creamy texture. The high quality ingredients, like organic Matcha, Ceylon cinnamon, bourbon vanilla beans, and roasted Japanese hojicha tea give the gelatos beautifully intense and complex flavors. 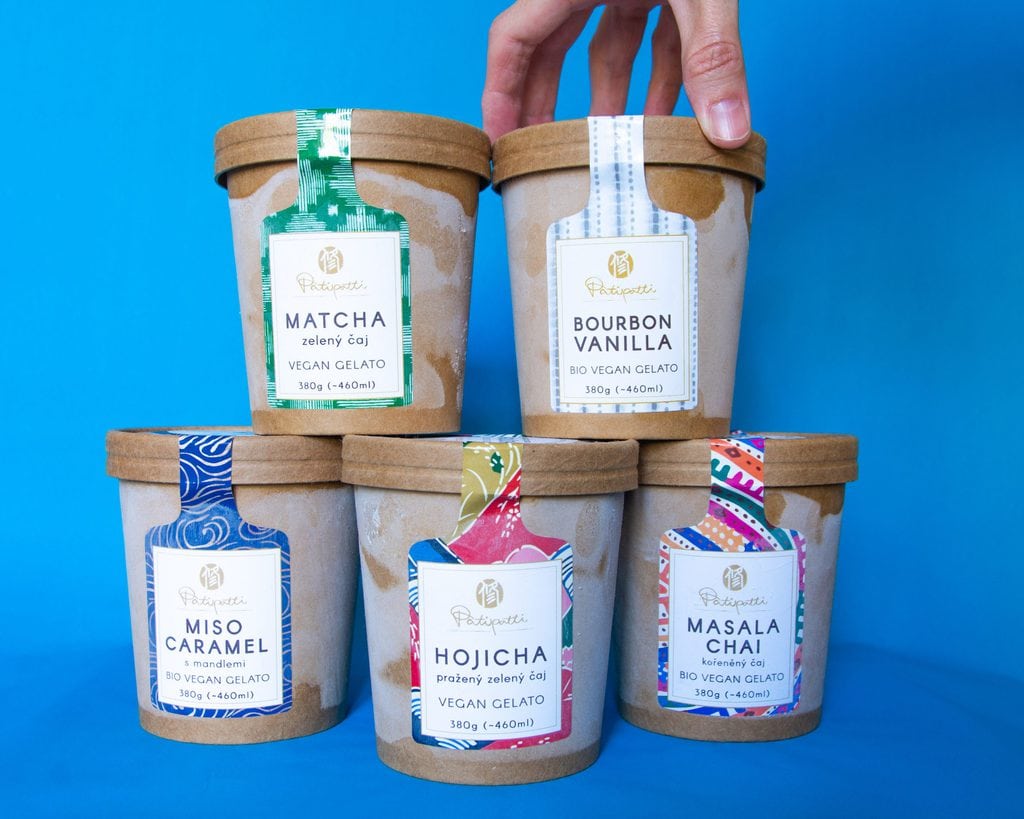 If you’re a fan of the classics then the Bourbon Vanilla is going to be your favorite. If you prefer herbal tea flavors then try the Matcha, and if you want a sweeter gelato then opt for the Miso Caramel or the Masala Chai. But honestly, you can’t go wrong with any of their flavors!

Currently the brand is sold at locations in Prague, Plzeň and Klatovy.

Disclaimer: The owners of Patipatti gave me samples of their gelato to try and review. All opinions expressed are 100% my own. 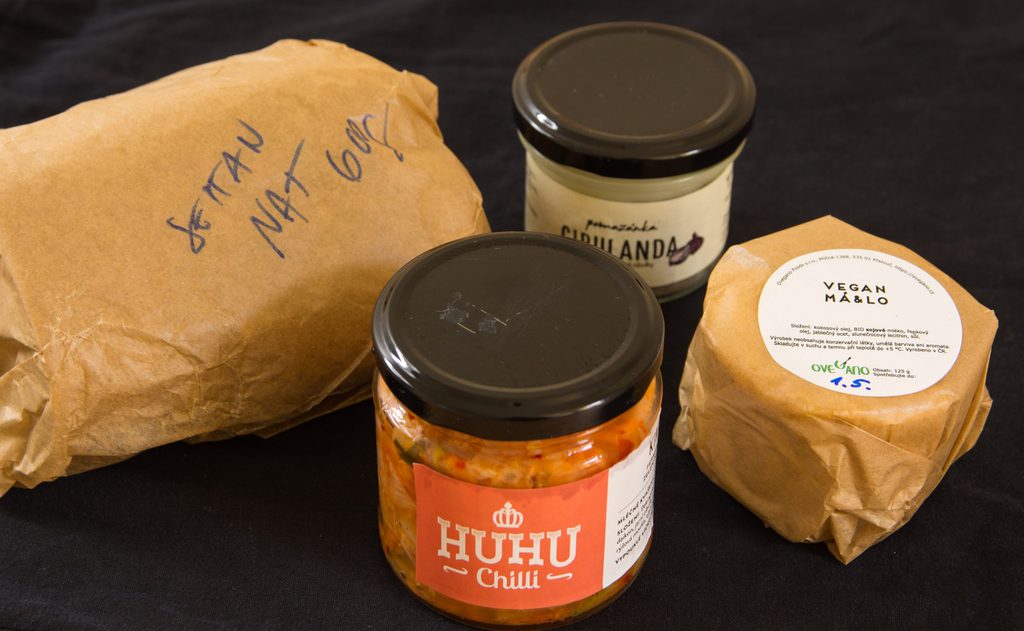 Ovegano is a Brno based vegan company that makes a wide variety of products like vegan kimchi, vegan butter, seitan, vegan spreads, and even BBQ sauce.

I only recently found out about the company, although I did eat at a restaurant they had in Brno a few years ago, and boy am I super happy to add them to my list of favorites.

Their vegan butter is probably the best I’ve ever had. It’s super creamy, salty, and a bit tangy. I highly recommend it. Additionally, their onion and mushroom spread is incredibly tasty and the perfect addition to a vegan cheese board. Finally, their kimchi and homemade seitan are both solid products that I’m sure I’ll buy again and again.

If you want to know more about these products, check out the video tasting I filmed.

You can get Ovegano products from their website. Rohlik also has a very limited selection.

Their cashew cheese is fresh, super creamy, and incredibly delicious. They have seven different flavors; my favorites are the a la provance and the smoked flavor. Both have the texture of fresh goats cheese, and are delicately flavored. I almost always have one of them in my refrigerator.

They have also started making a rice milk cheese which is super firm in texture. I find it to be a good Parmesan cheese replacement, as it grates nicely and tastes good melted.

You can get them on Rohlik, Puro Shop, or at Forrest Bistro.

If you’re like me, you may have seen endless Youtube “what I ate in a day” videos from vegans and wondered – “where do they get that super creamy nut butter that just glides right off the spoon”. Every single nut butter I’ve bought is so thick it’s even a little hard to get out of the jar.

Well, Šufánek’s cashew butter is a dream. Uber thick and creamy, but super spreadable. Plus, it tastes amazing!

I just discovered this brand but can’t wait to try their other nut butters.

You can find Šufánek at most health food stores around Prague, including GOFRESH, or the vegan grocery store Ekobchod.

These vegan sausages are to die for. So smokey (and spicy if you get that option), so meaty, so delicious. If you aren’t grossed out by vegan products that taste like the real thing, then this sausage is for you!

It’s an excellent option for sandwiches, cheese boards, or just as a snack on crackers or baguette. Sometimes I even chop it up, heat it in a skillet, add vegan cheese, and put it in a tortilla for a mock-chorizo taco.

You can get them from Rohlik, Dobra Priroda, and Herbio (in Plzen).

I think this is the very first vegan Czech made brand I heard about. Nemléko translates as “no milk” so as you’d imagine they have plant based milk alternatives, yogurt, and even ice cream.

I’m don’t really like their yoghurt but their plant based milks are delicious, especially the poppy flavor.

I hope to one day try their ice cream too, so I can let you know how it is.

Nemléko is sold in a lot of bio and vegan shops in Prague, including World Vegan, GOFRESH, and on Rohlik or Kosik. You can also order their products from their website, which is also the only place you can currently get their ice cream.

Spak is a Czech condiment company. Yes, it might sound strange to talk about condiments, but since I want to support local suppliers as much as possible, I’m throwing this one in here.

Spak has a vegan line of products including mayo, tartare sauce, and salad dressings. I actually didn’t realize this was a Czech brand until I started research for this article, but I’ve been buying their mayo for years now and can confirm it’s a quality product.

You can get Spak’s vegan mayo, tartare sauce, and vegan thousand islands dressing from Rohlik.

What is Your Favorite Vegan Czech Food?

I will most certainly be adding products to this list as I discover them. Please leave a comment below and let me know what your favorites are or what you want me to make a tasting video for!