NOTE: As of January 2020 this vegan cooking class in Chiang Mai is still on offer.

Thailand is a country known for its delicious cuisine. Thai people embrace the art of cooking with relish and zest. No matter where you go in Thailand you are not far from the smell of a cooked meal, be it a street cart, a food stall, or a restaurant. The resulting pangs of hunger never really dissipate, even after a hearty lunch or dinner. Thai food, like a good book, keeps you wanting more.

The country, like most in southeast Asia, is relatively inexpensive. You can get Pad Thai on the street for about $1.50 and a meal in a restaurant costs little more, negating the need to cook while traveling on a budget. But what happens after one leaves Thailand? I can only imagine the empty feeling and empty stomach I’ll have when I can no longer satisfy a craving for sweet and spicy red curry.

So before I left Thailand, I decided to take a cooking class. Luckily I found the best vegan cooking class in Chiang Mai Thailand. 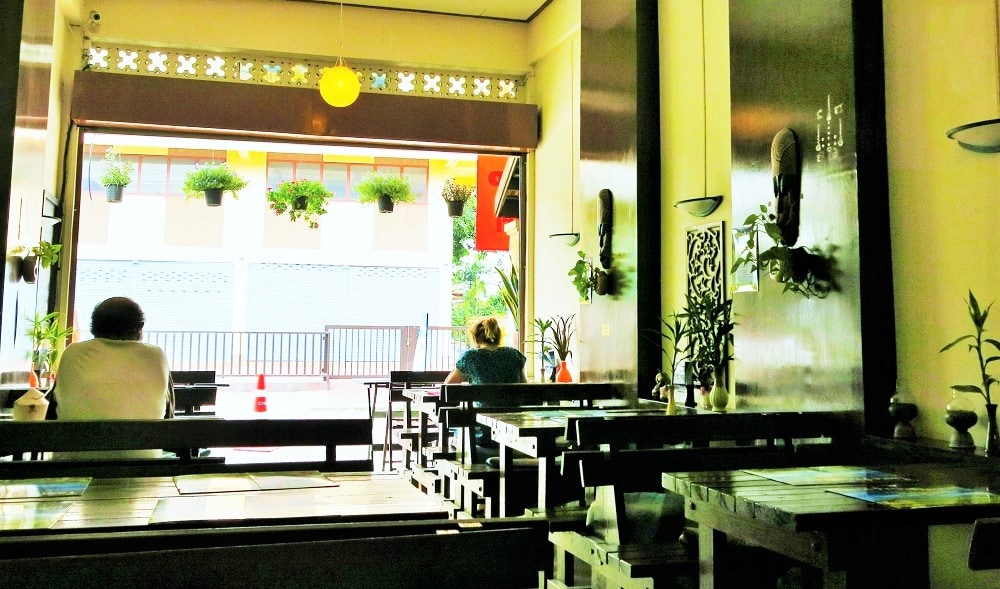 ​Taste From Heaven is a vegetarian restaurant in Chiang Mai that offers vegetarian and vegan cooking classes for 1,000 Thai baht (about $30.00 USD). Students choose five traditional Thai dishes to learn how to cook from Thai chefs. 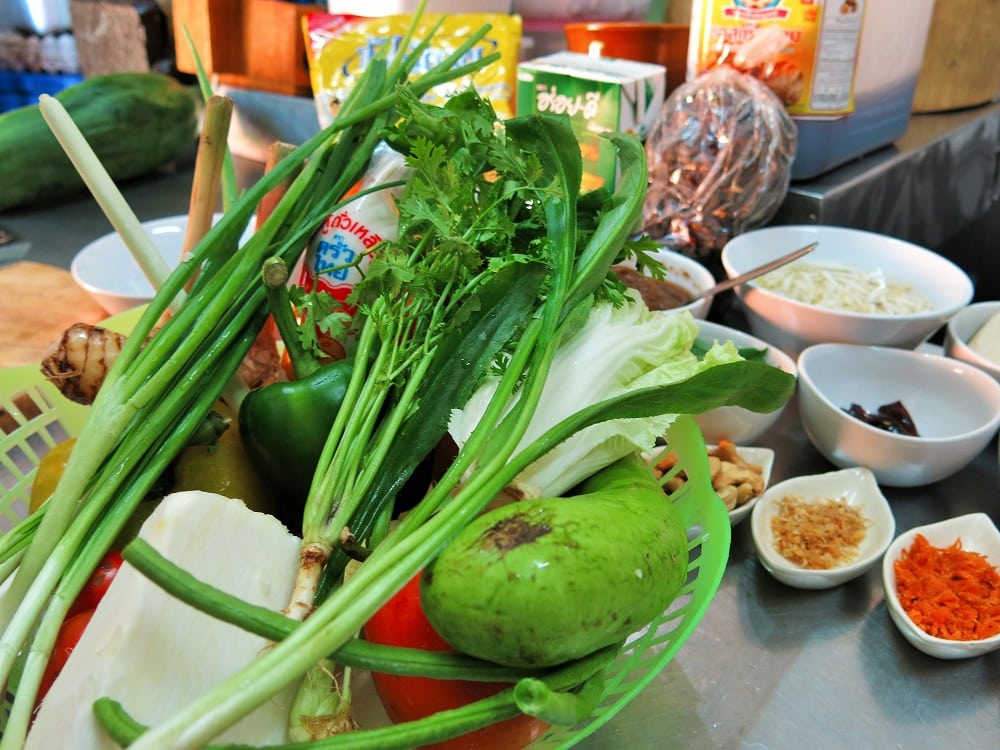 My instructors, Golf and Pawn, would teach me not only how to cook Pad Thai, Red Coconut Curry, Clear Broth Soup, Cashew Nut Stir Fry, and Green Papaya Salad, but they’d also educate me about some traditional Thai cooking ingredients.

Pawn draped me in an apron when I entered the kitchen, and we started a game which consisted of her pointing to the ingredients and me fumbling to name each of them. The first item of inspection looked like a strangely shaped giant green gourd and I was stumped. Pawn smiled politely and told me it was a green papaya. I had eaten papaya a million times but only in the sliced, skinless, pink version served up at super markets and in fruit salads at restaurants. 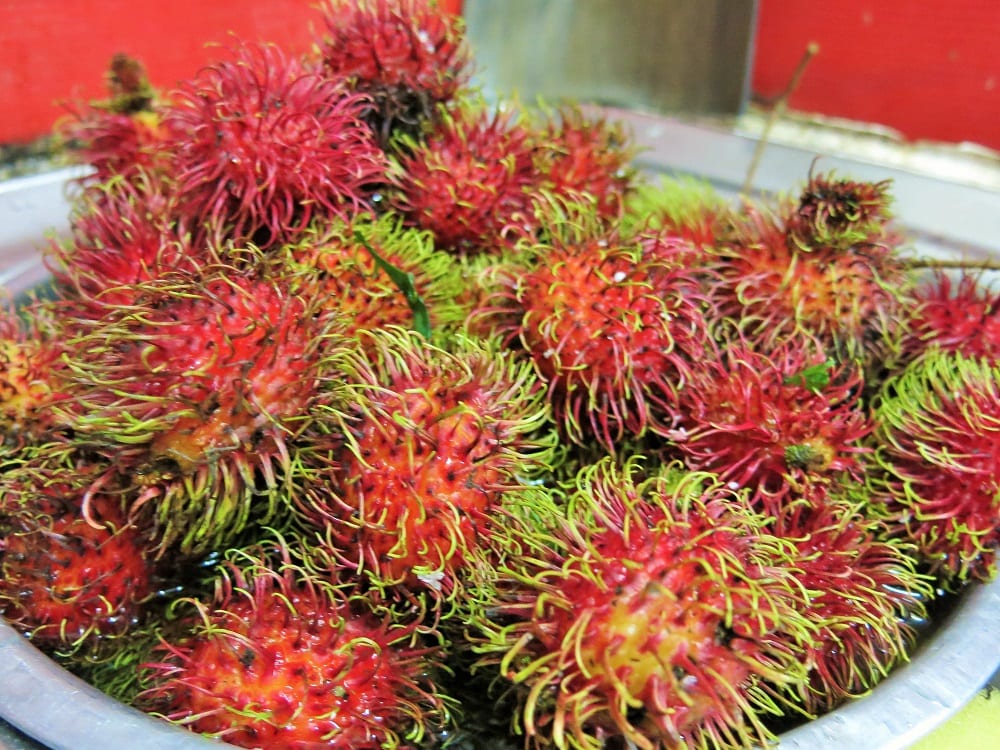 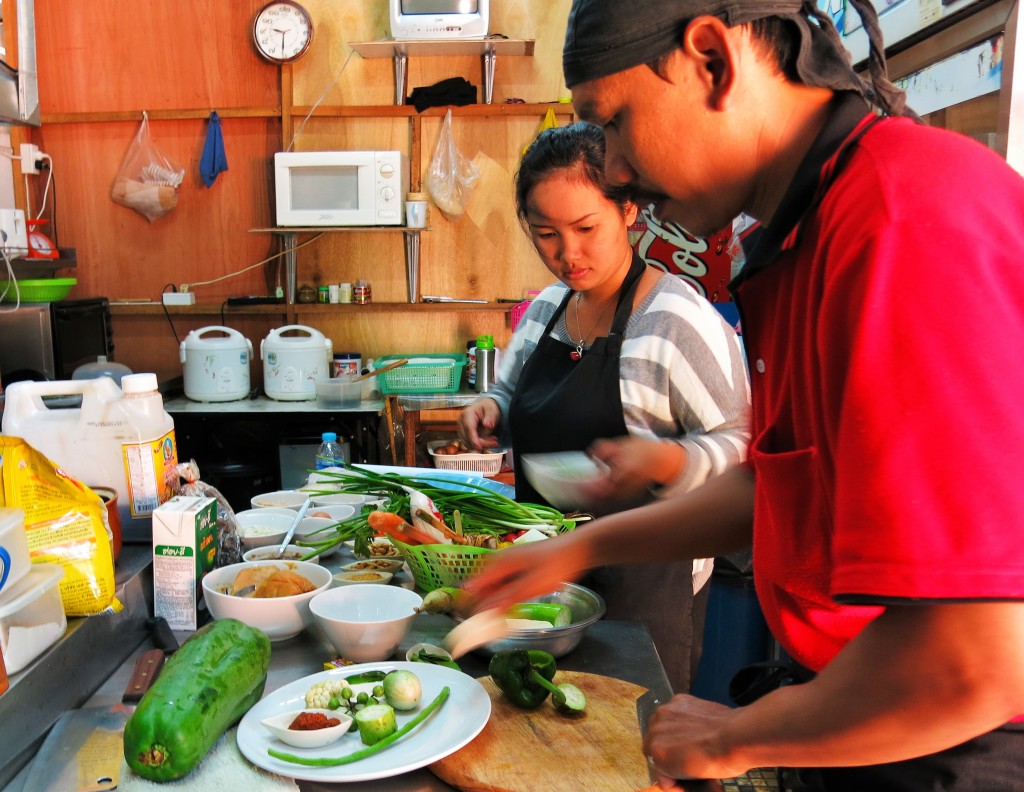 I would later learn that familiarizing myself with the foreign ingredients would be the only challenge I faced in learning to cook Thai food. Each dish was simple and fast to make. 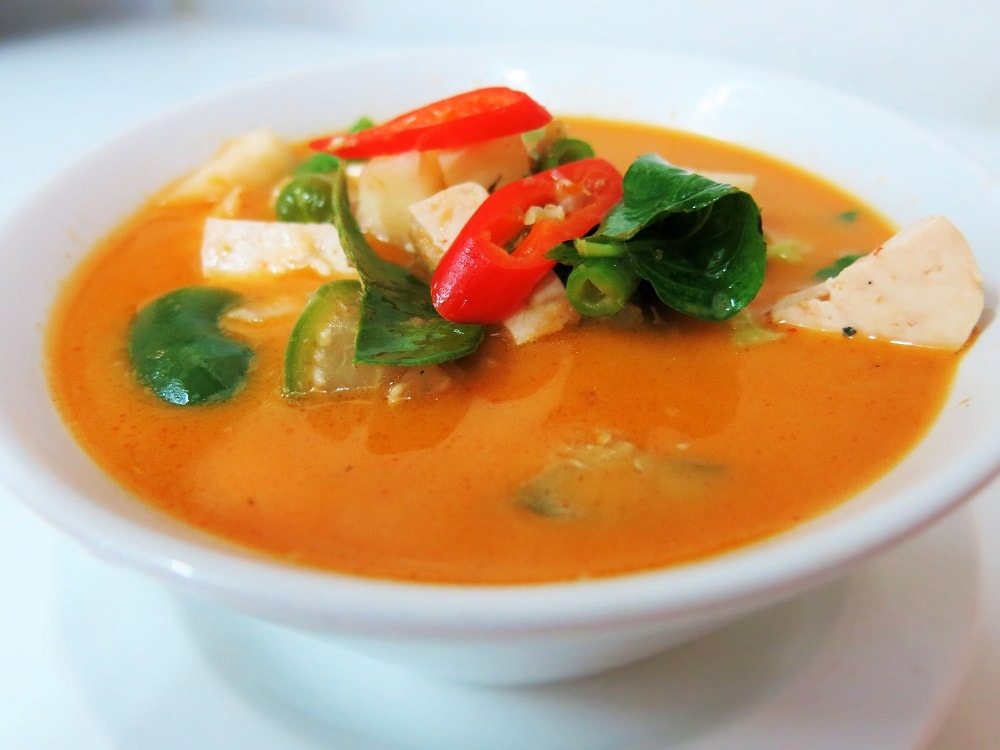 The vegan Thai Red Curry, which we cooked in minutes, simply consisted of frying curry paste and mushroom bouillon in hot oil until it melted together, adding the coconut milk and water, bringing it to a boil, and throwing in vegetables, kaffir leaves and tofu, cooking for about five minutes, and finishing off with mushroom powder, sugar, spicy chilies, and basil leaves.

The Vegan Thai Clear Soup recipe was even easier. We started by frying garlic in oil, then boiling water, mushroom bouillon, mushroom powder, soy sauce, and pepper. Tofu and vegetables were added at the end and we let it all cook for about five minutes total. The soup was finished with fried garlic. It was probably one of the most simple dishes I’ve ever made. 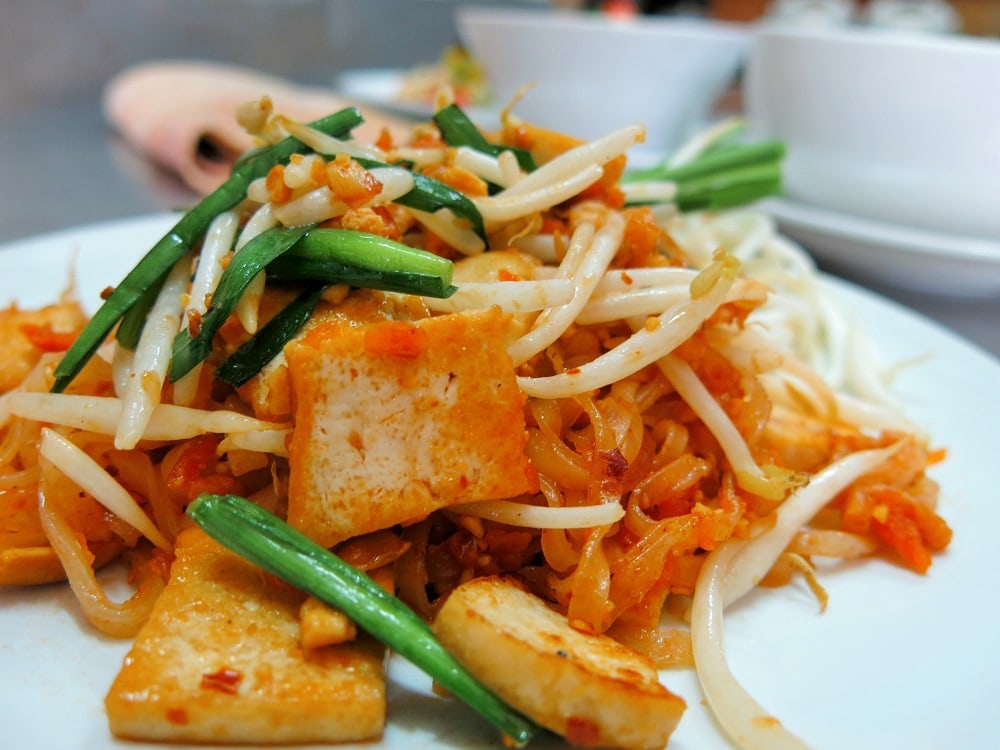 For the Vegan Cashew Stir Fry we sautéed garlic in a pan with oil, added deep fried tofu, peppers, onions, and water. Cooked it all for one or two minutes and seasoned to taste. 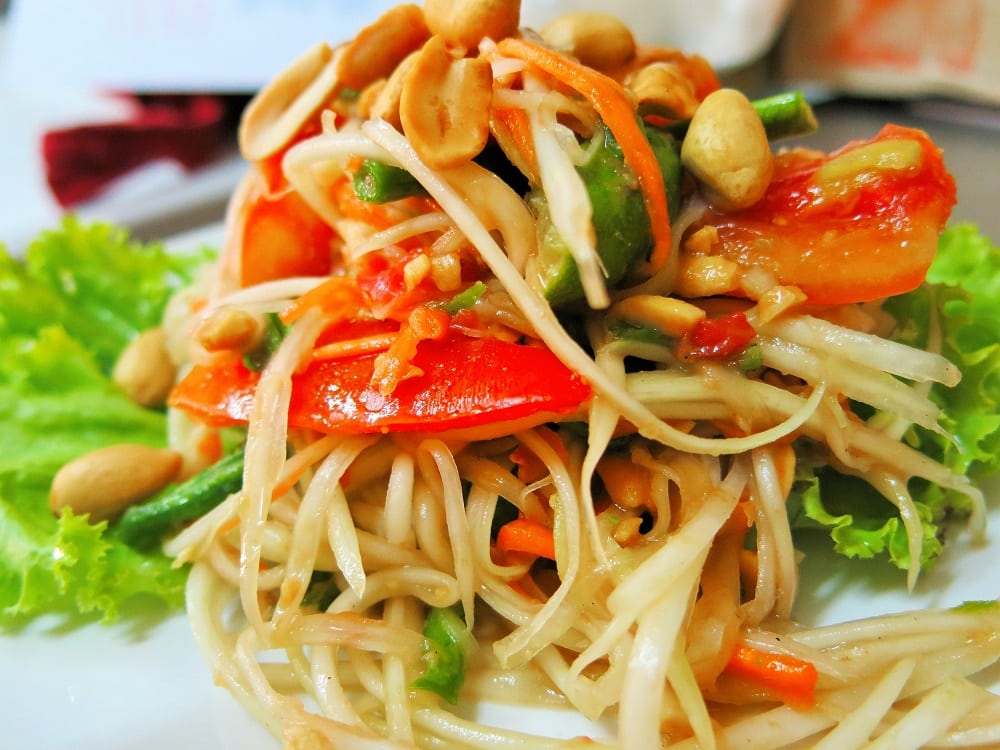 The most involved recipe to make was the Vegan Green Papaya Salad, but it was also the most fun. The recipe called for the use of a mortar and pestle a fourth of the size of my body!

After peeling the skin of a large green papaya I was given a special vegetable peeler with ridges that would shave away finely julienned pieces of papaya.

Then the fun started. We added hot chilies and garlic to the mortar and banged away at it with the giant pestle. Then we added chopped string beans and roasted peanuts and pounded them until everything was lightly crushed.

Next we threw in tomato, green papaya and carrots and mixed and lightly banged the ingredients until the mixture was bruised and juicy. For the last step we squeezed in the juice from an eighth of a lime and threw it in with with mushroom powder, tamarind sauce, and palm sugar and give it all one last light pounding and mixed everything together. 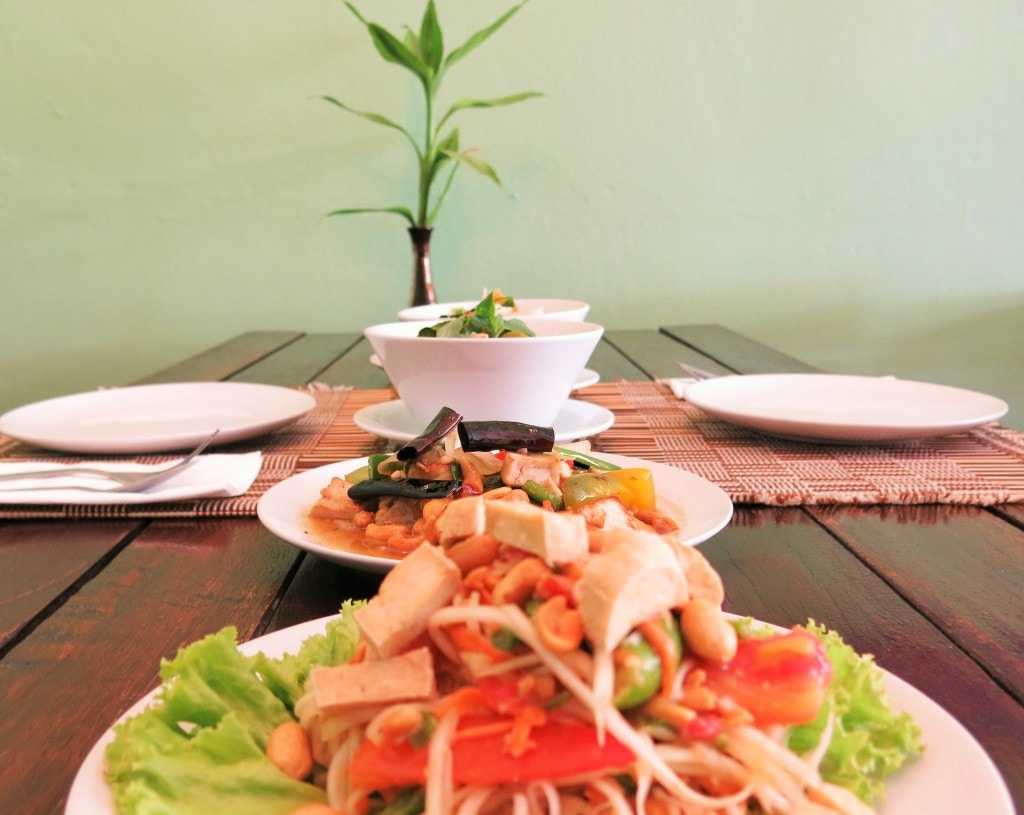 Once the class was over I had learned how to create five delicious vegan versions of Thai dishes. Doing so expelled some of the mystery around cooking this type of cuisine, and meant I could easily recreate delicious vegan Thai food in my own kitchen. 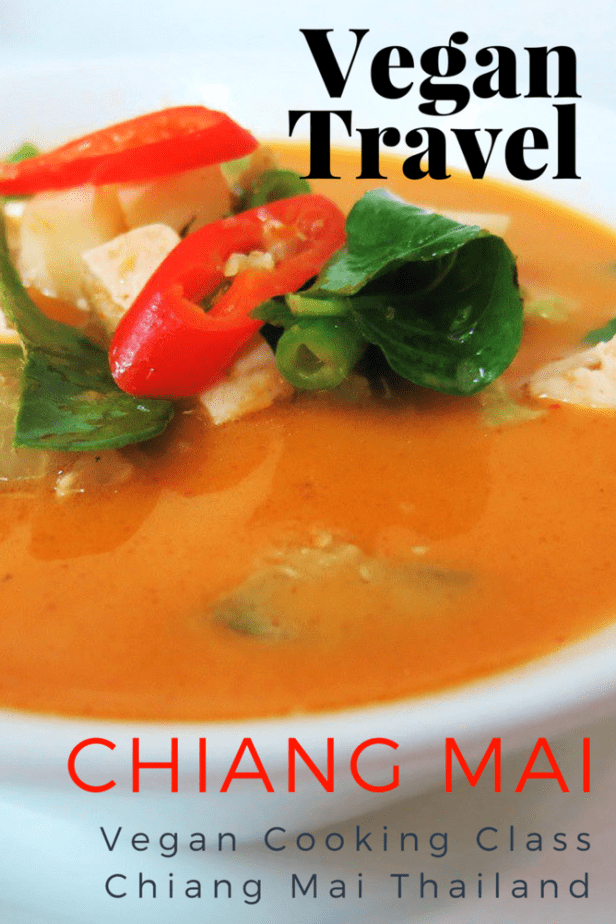 I've just contacted them and unfortunately they informed they stopped doing the classes a while ago.. Thanks!

Thanks for the info. Seems they start and stop the classes. Maybe it's seasonal, maybe right now it's a covid thing. Dunno. :)

I took this class today based on your recommendation. It was fabulous!! Pawn was an awesome instructor. The food we made was the best food we've eaten in Thailand. Thank you!

Hi Charlie, I'm so happy to hear that! Thank you for letting me know. :D

Hey Veggie Visa! Just wanted to let you know I signed up for the cooking class today (so it’s still going ?). SO excited! Thanks for the helpful post ?

Oh WOW!! Thanks so much for letting me know. Have a great time! :)

It's funny how you mention how quick these dishes were to make. We had exactly the same experience, only problem wwas when I tried to cook a Green Curry at home later on it really didn't work out the same haha. There was stuff all over the place, the wok hissing and in the end I finished my curry in a big old mess. Think we might need to hit up a couple of extra classes to perfect our Thai cooking.

Haha! Yes, it's true, having the restaurant do all the prep work for you does make a difference. You just have to learn the art of mise en place and clean as you go. ;) What did you end up cooking by the way? Red Curry?

heyy, I'm planing to go to Chiang Mai, too. I didn't really get if the cooking class was at "Taste of Heaven"or you only saw the flyer there!? (maybe my english is too bad!? ;) ) Do you have a Link or E-Mai-Adresse for the cooking classes?

And in general, do you have some suggestions what to do and/or where to go in Thailand as a vegan?

Hi Ronja, I apologize for my very late reply. I only saw your comment today! My reply is probably not helpful to you at all but yes the cooking class was at the restaurant "Taste From Heaven". Here is their website: http://taste-from-heaven.com/Taste_From_Heaven/Cookery_School.html