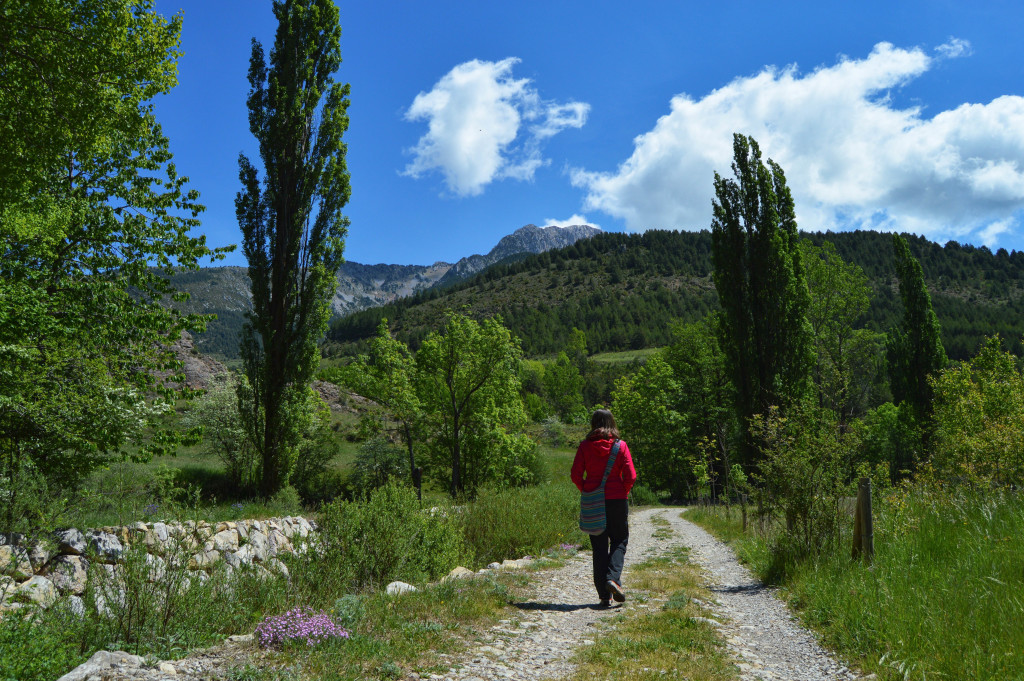 Michael and I recently spent five days in Spain following in the footsteps of a religious sect, called the Cathars or The Good Men, whose origins trace back to the Byzantine empire, and whose existence ended tragically and brutally in the 13th and 14th centuries.

The sect and their some-what vegan, some-what feminist, progressive philosophies inspired us to hike 90 kilometers of the trail through Catalonia, named the Cami Dels Bons Homes (Path of the Good Men), they used to flee from persecution in France.

Here to see some of the incredible vegan dishes I enjoyed during my time in Catalonia and on the Cami dels Bons Homes that were inspired by the Cathars.

NOTE: To read more about my connection to the Cathars and some of their fascinating history, click here.

Niu Nou is a slow food restaurant that specializes in traditional Cathar cuisine.  My dining experience was an excellent introduction to the vegan dishes of the Good Men and Women.  I had the chance to dine at Niu Nou the day after I first learned about the Cathars on a trip to Baga.  This meal solidified my interest in the Cathars and our decision to hike the Cami dels Bons Homes. Who says you can’t get amazing vegan food in Spain? 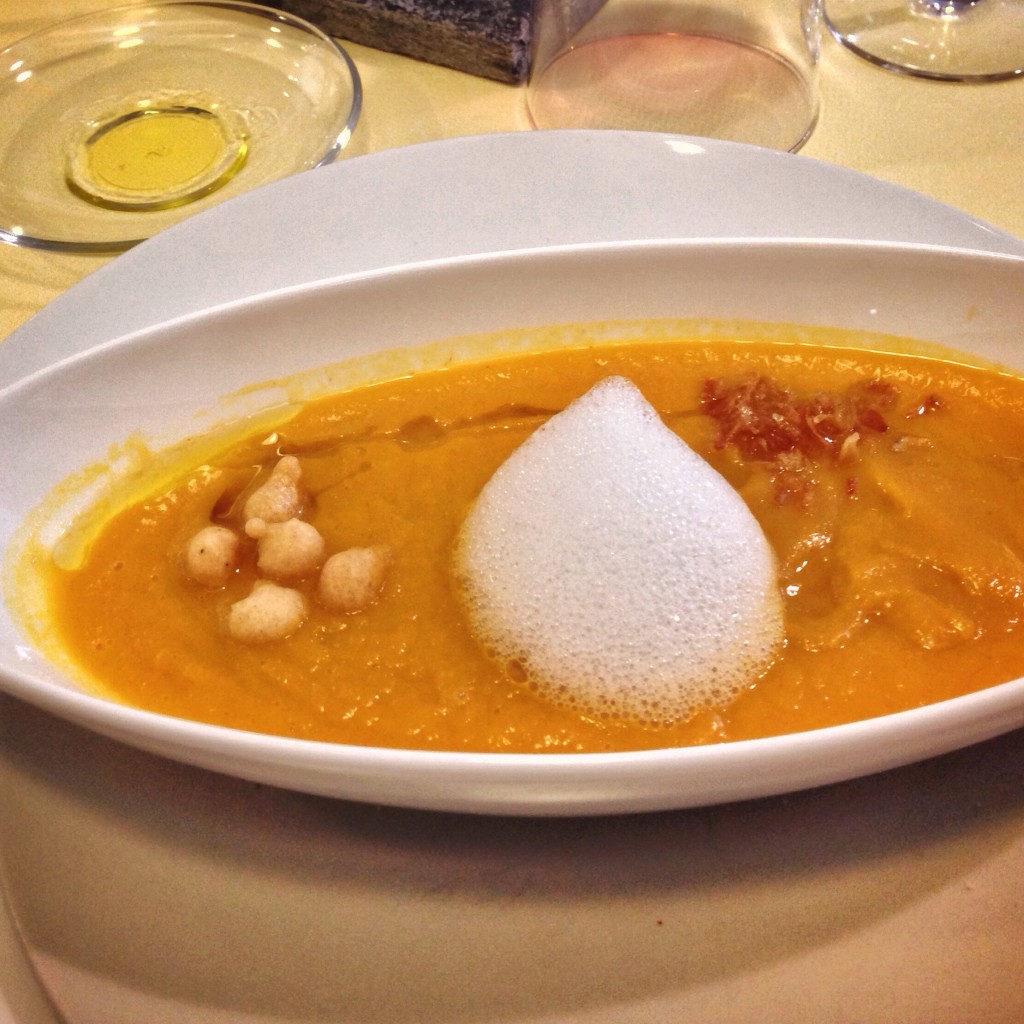 This soup was so good that when I finished scooping out as much as I could I had an intense urge to lick the bowl.  It was a superbly executed and well spiced dish with a creamy, smooth carrot base topped with crispy chickpeas, and sweet coconut foam. 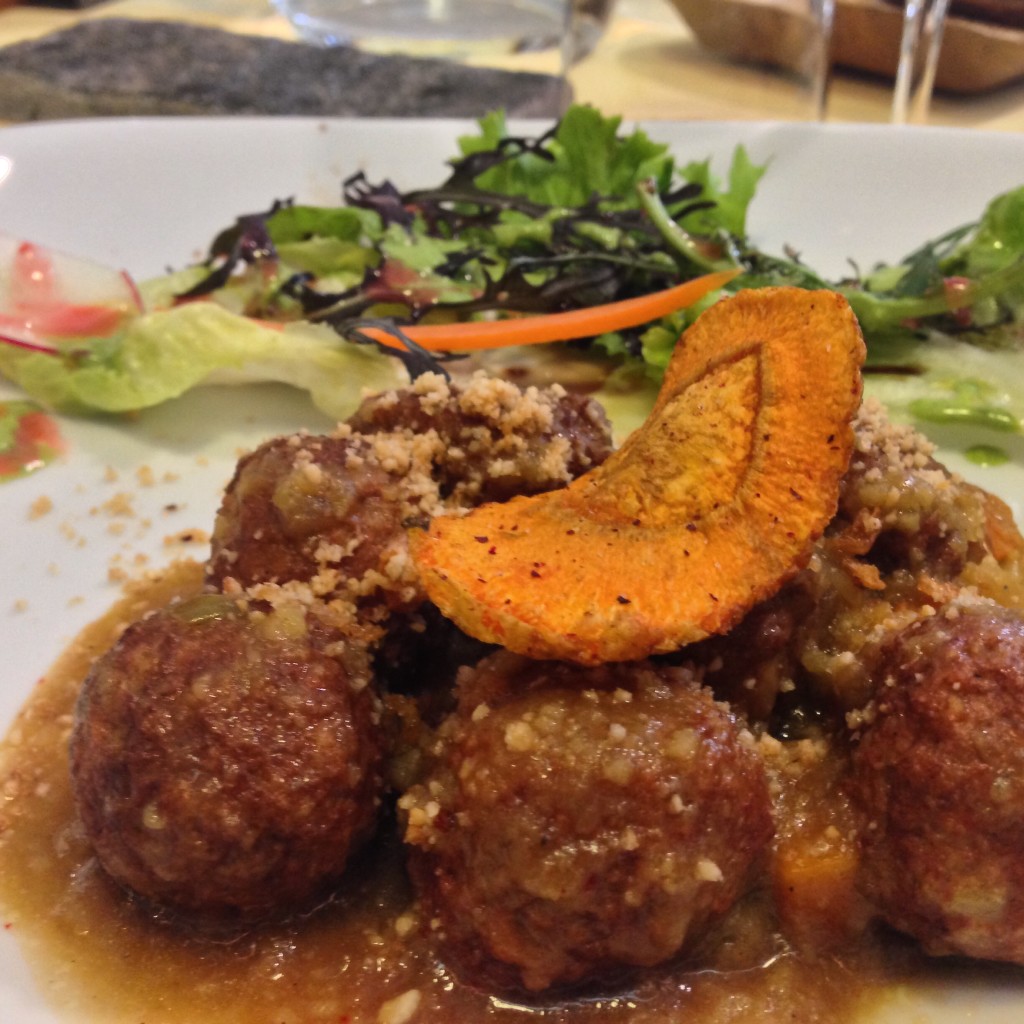 Since giving up animal flesh several years ago, I’ve never had a dish that so closely resembles meat. The texture, flavor, and unctuous qualities of the dish were so similar to meat that if I had not been assured several times that it was in fact vegan, I would have stopped eating it out of disbelief.  Needless to say, I loved these vegan meatballs! 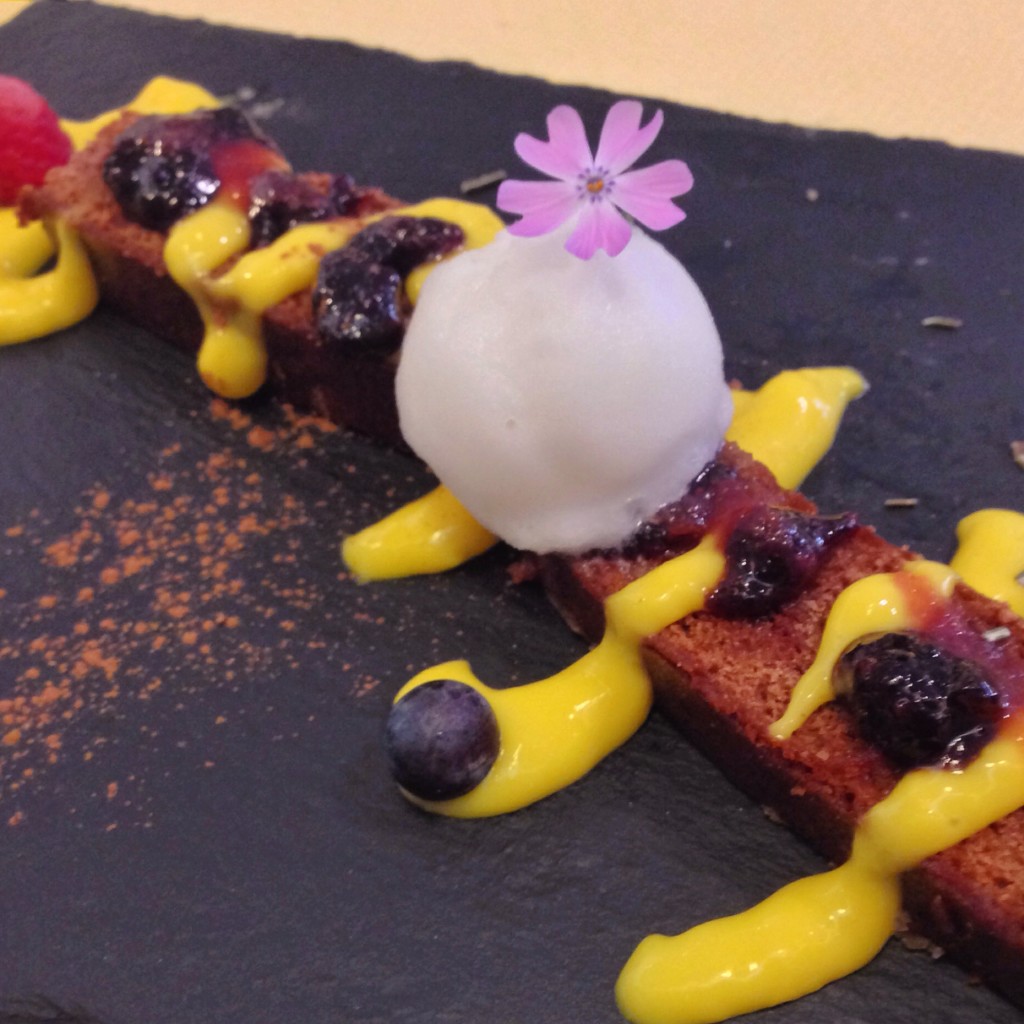 If you’re a traveling vegan you know finding dessert is a real treat and this vegan spice cake was no exception.  The delicate spices of the cake were complemented by a creamy saffron sauce and balanced with a sweet floral sorbet.  I could have eaten seven of these.

The First Days on the Cami

We spent our first two days at the Cerdanya Resort in Prullans, Spain.  The hotel was opened in 1947 and has been in the same family for generations. The staff went out of their way to prepare hearty vegan meals to keep me fueled for the hikes we went on.  From their huge dinner and breakfast buffets, to the picnic meals, to the hearty custom meals, everything was fantastic.  They even have a traditional Cathar Dinner every Friday night! 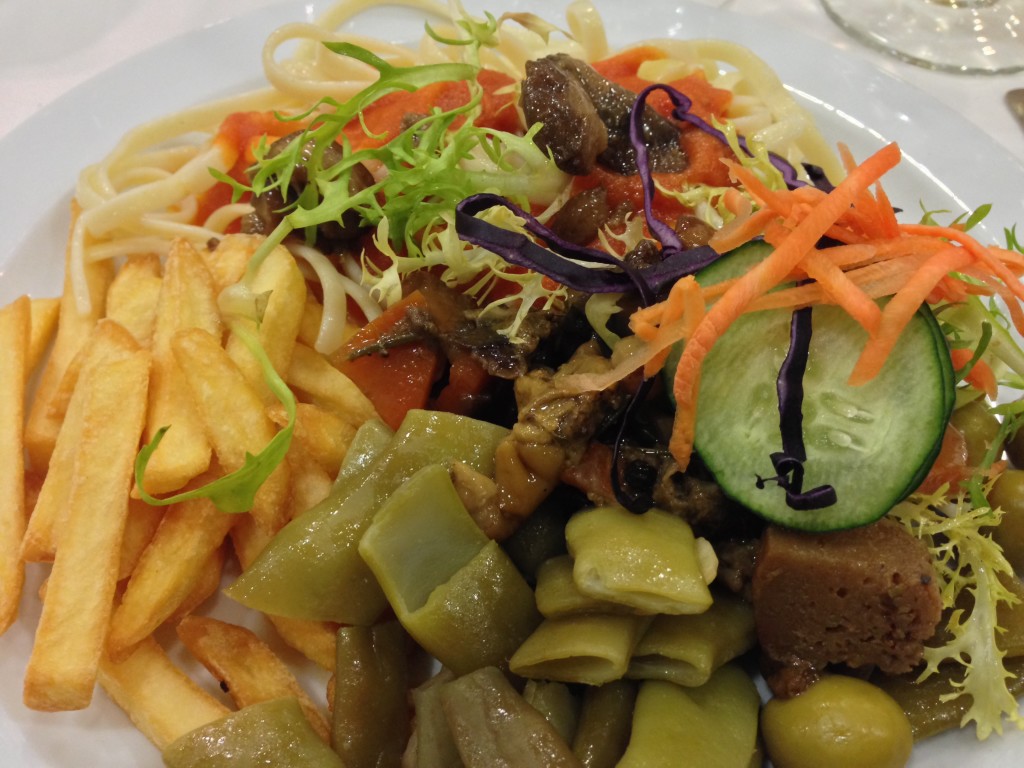 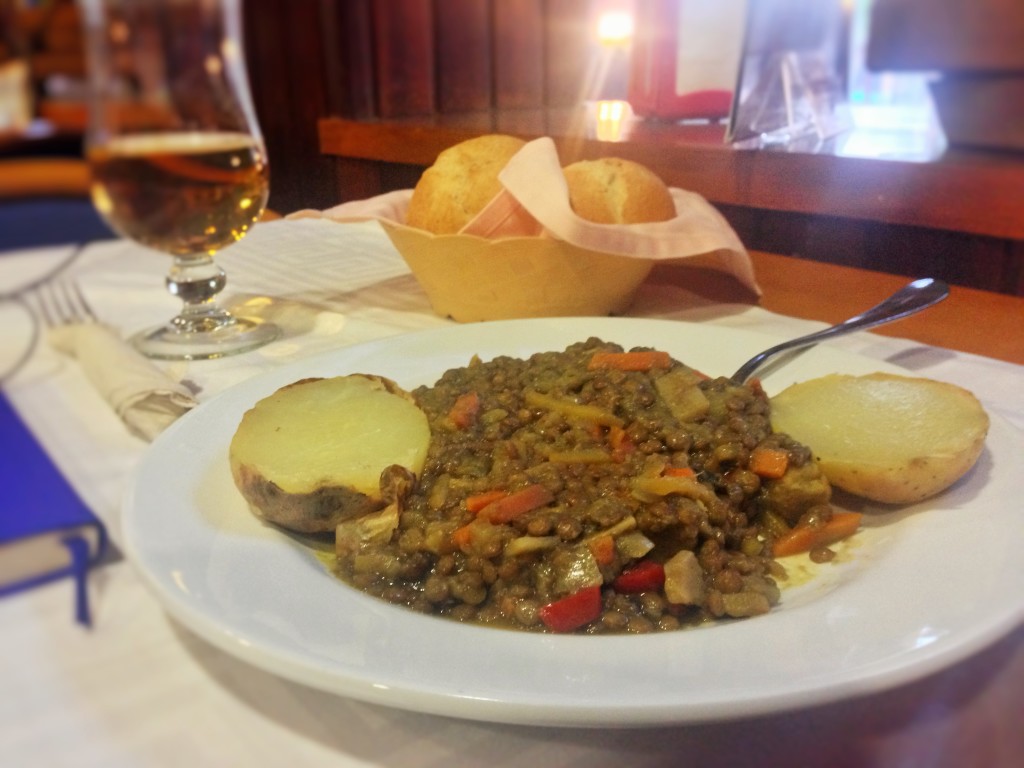 Day two of our hike ended at Moli del Caso with an incredible five star meal.   Molí del Casó is a beautifully restored mill that uses solar energy, has organic gardens with herbs and produce, and offers a peaceful and relaxing setting to rest in.

The owner and chef, Conchita, prepared a lovely five course meal for us that night, the perfect ending to an intense day of hiking. 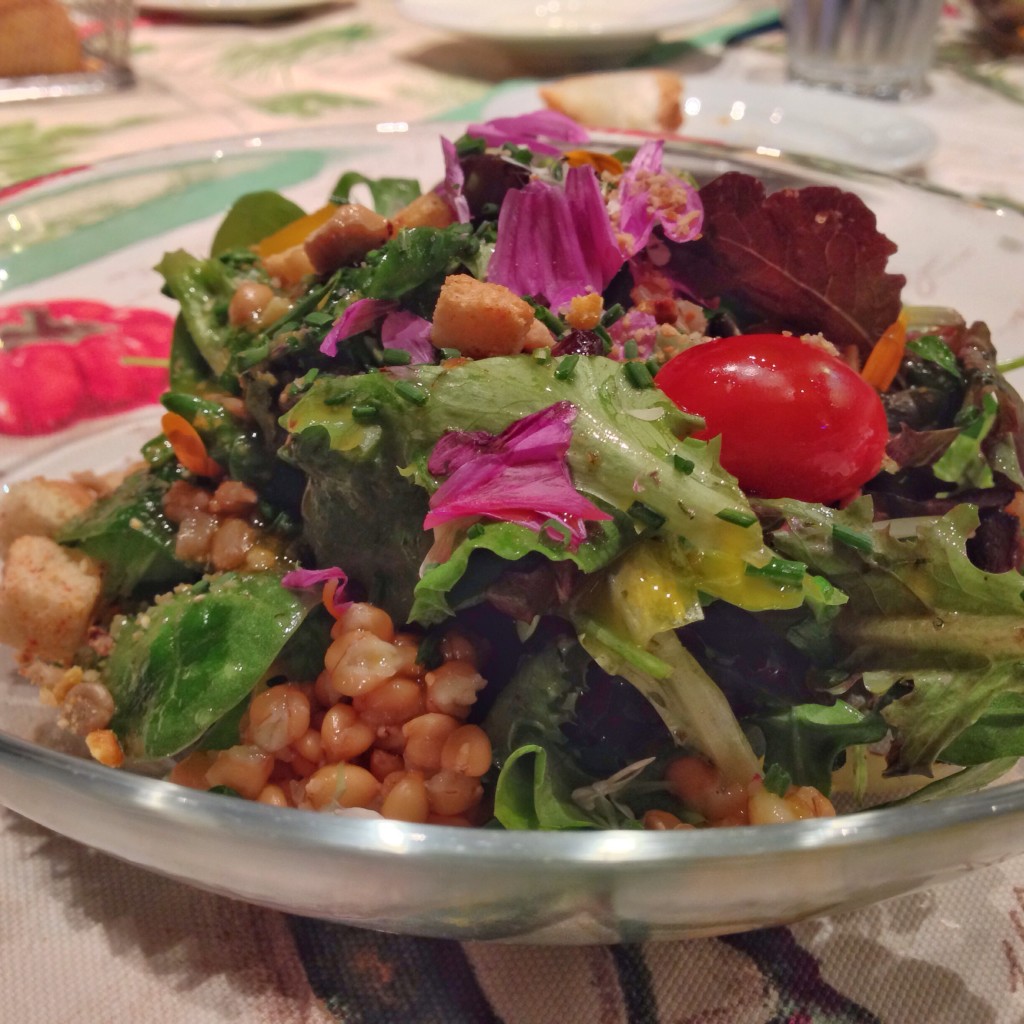 Never before has a salad been so satisfying.  I don’t even really like salad but I would never pass up the chance to eat this one again.  It was chocked full of creamy chickpeas, ripe red tomatoes, nutty sunflower seeds, tinder organic lettuce, edible flowers, and tossed with a tangy vinaigrette. 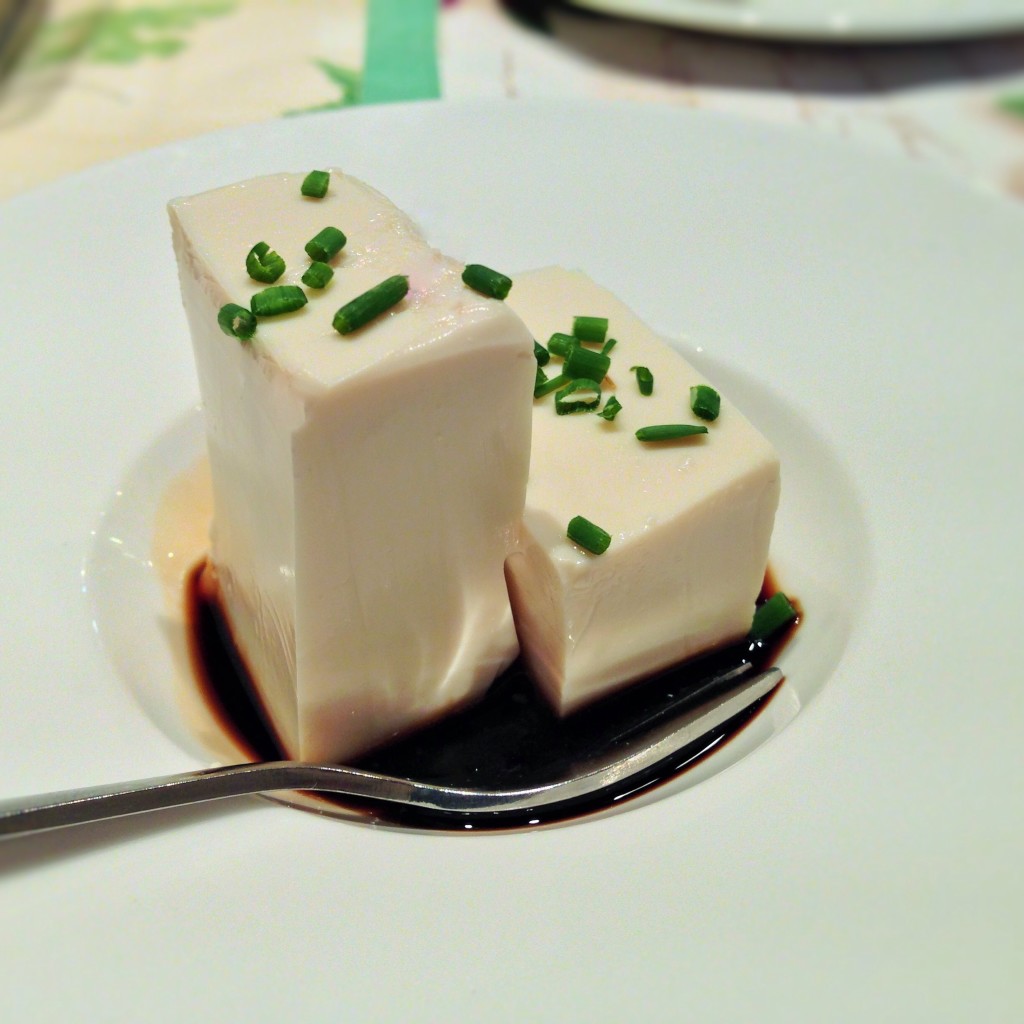 Silky tofu towers bathing in a pool of soy sauce and topped with tender chives.  Who could say no? 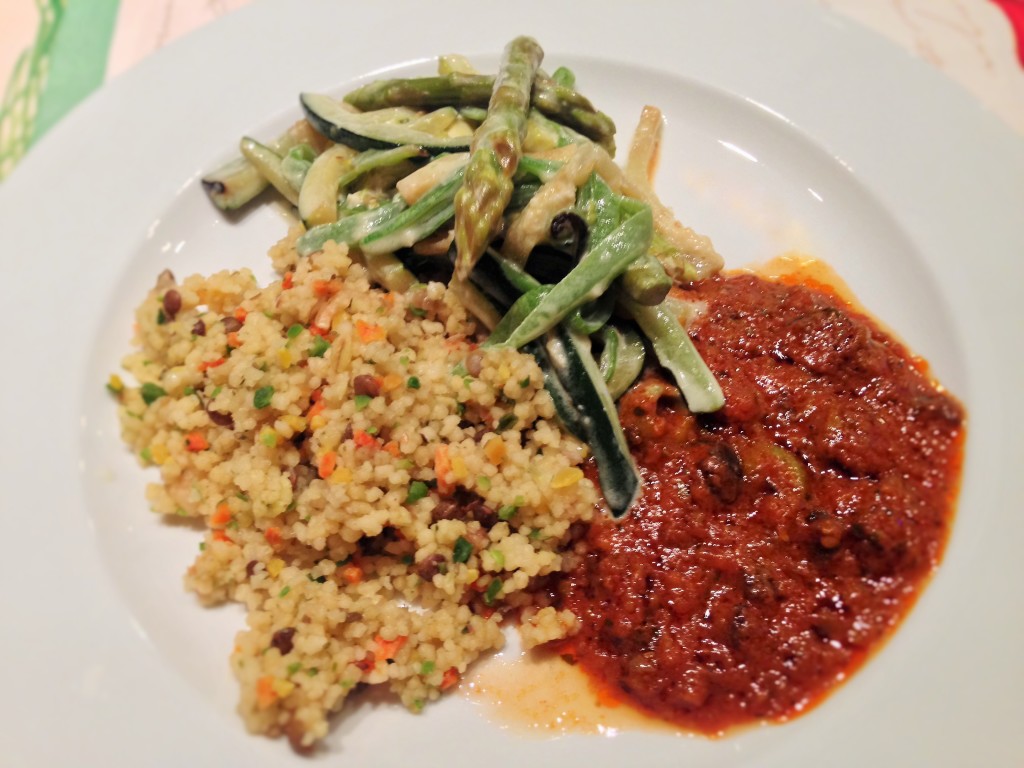 Couscous with Vegetables and Lentils

This dish was the most hearty of the five.  It was a well composed trio consisting of light and fluffy couscous, crispy green veggies, and hearty lentils in a rich tomato sauce. 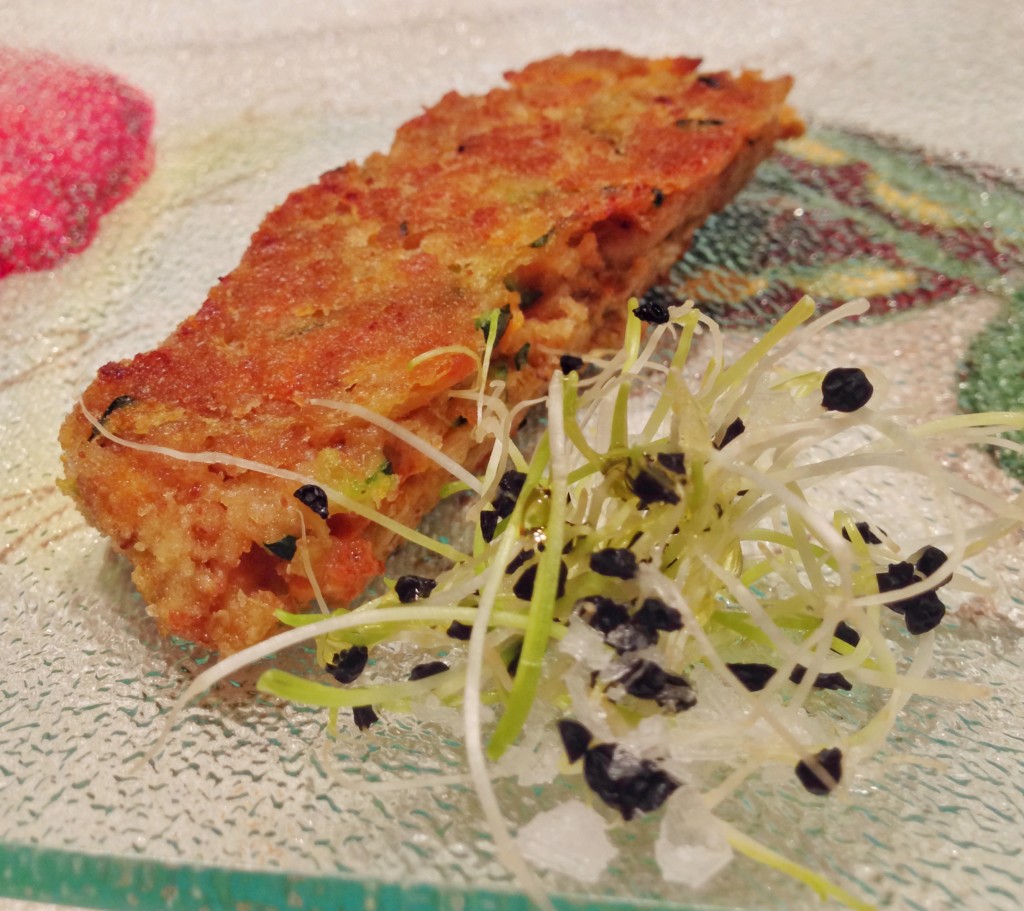 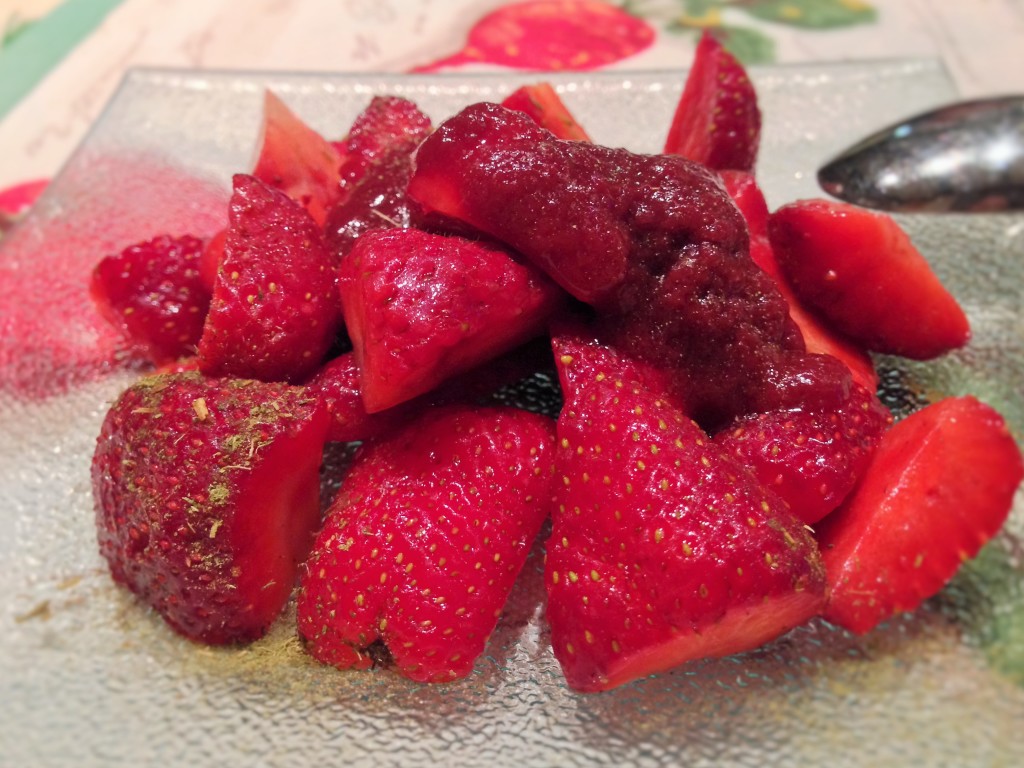 Part of what I love about reconnecting with nature is that everything seems to taste better. These berries were no exception. They were juicy, sweet, perfectly ripe…and gone in about 30 seconds.

We spent a few nights at Hostal Cal Francisco in Gosol, Spain.  The hostal is located right next to the Cami dels Bons Homes trail and is a three minute walk from the town center, making it the most convenient accommodation in town.

Teresa, the hostal’s hospitable and gracious host, made sure I never went hungry.  She prepared several special vegan meals for me including spinach tortellini in tomato sauce, a huge picnic lunch with a lovely eggplant sandwich for our hike, and a three course meal with Pan Con Tomate (toasted bread rubbed with fresh garlic and crushed tomato, drizzled with olive oil and salt), white asparagus, and oil blanched bell pepper, eggplant, and onions. 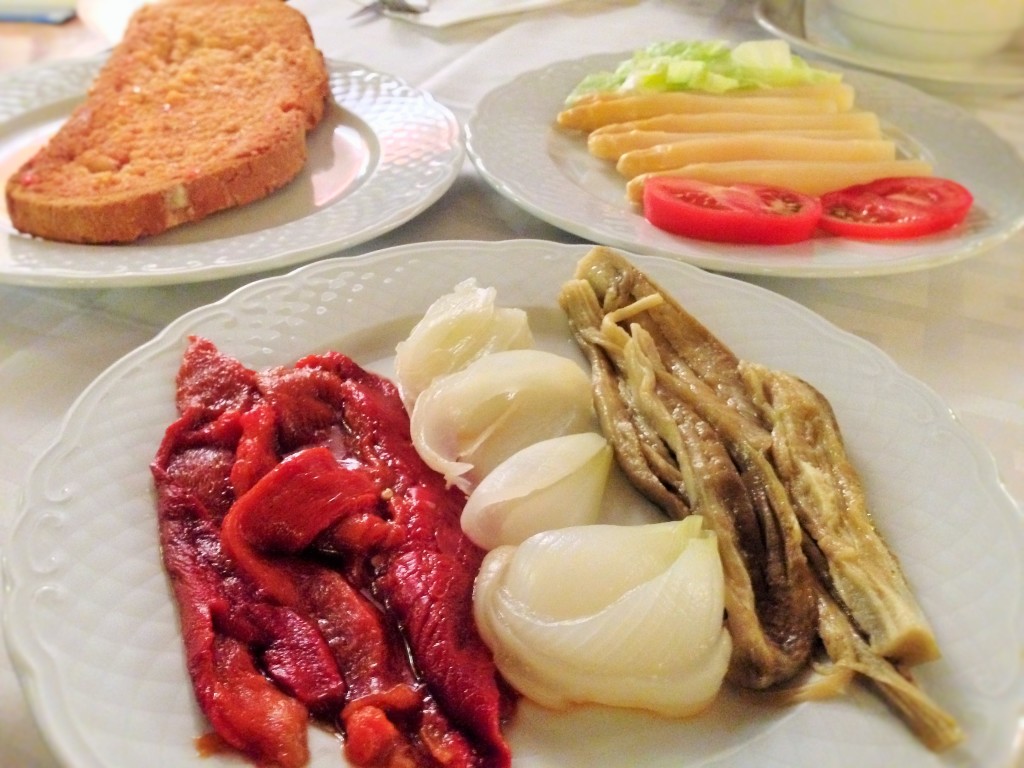 Cal Barbut is a small mountain hotel whose history dates back to the 18th century and is run by a wonderful Dane named Charlotte.

We arrived at Cal Barbut after what could have very well been the most intense day of hiking we experienced on the Cami dels Bons Homes.  Thankfully Charlotte had laid out a feast for us to enjoy in the private apartment we spent the evening in.  It included a delicately flavored, rich, and creamy Carrot Soup, a hearty and filling Ratatouille with Pasta, nuts, fruit, wine, beer, and dessert wine.  It was the best possible meal I could have imagined to end our time on the Cami. 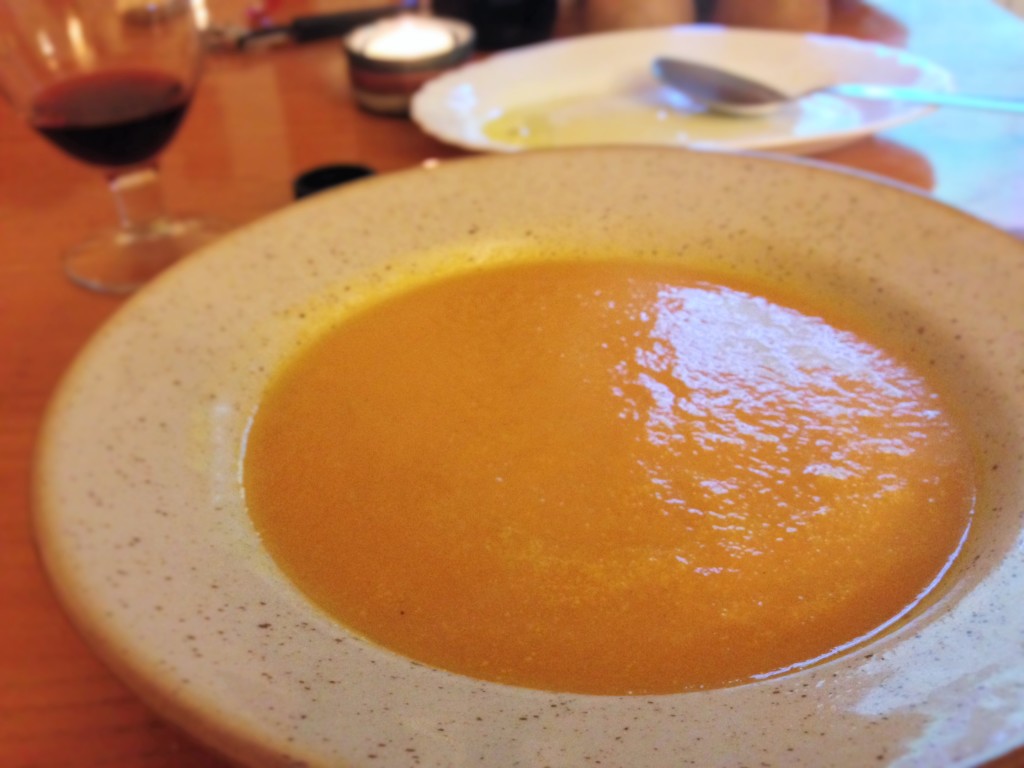 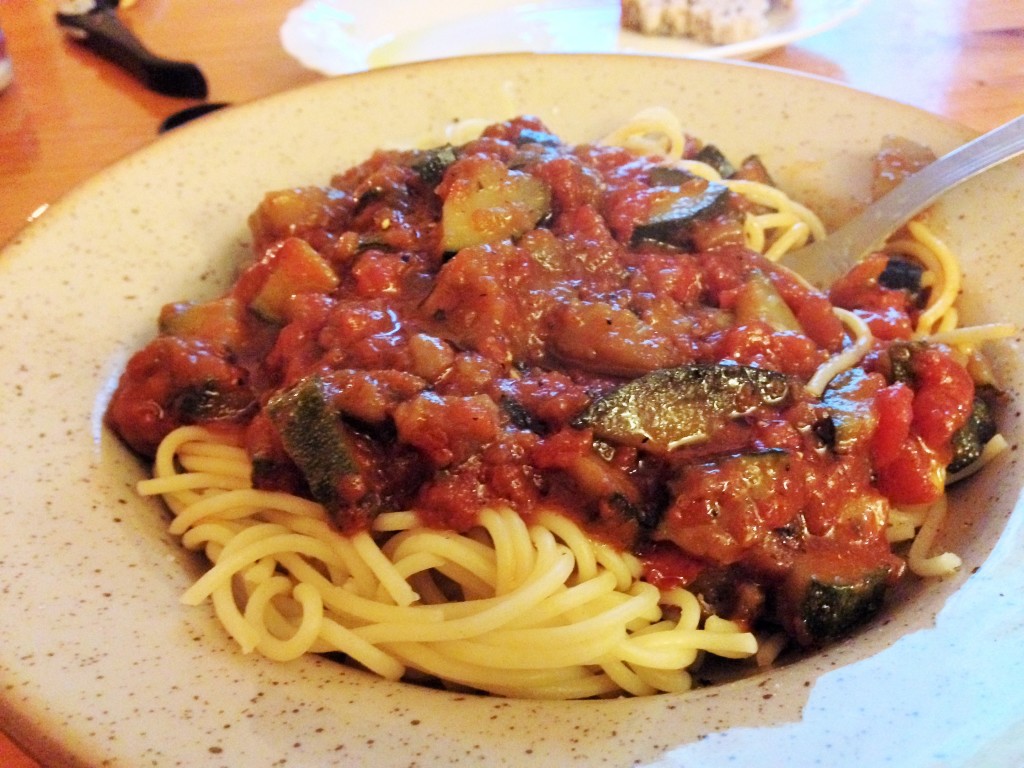 DISCLAIMER: The Cami dels Bons Homes Regulatory Counsel was kind enough to organize our five day hike, much of our transportation, accommodations, and meals. We are immensely grateful for their partnership. All thoughts and opinions are our own and formed without any prior agreement of a favorable review.

This sounds like a heavenly journey. It's also an inspiration to vegans everywhere.

Sounds like an amazing trip with such vegan friendly food! Think I might just add this trip to my bucket list... The perfect mix of seeing the beauty of Spain, learning about its rich culture and history and not to mention eating all that great vegan food!

I REALLY hope you do get to do this one day. I know you'd love it. :D