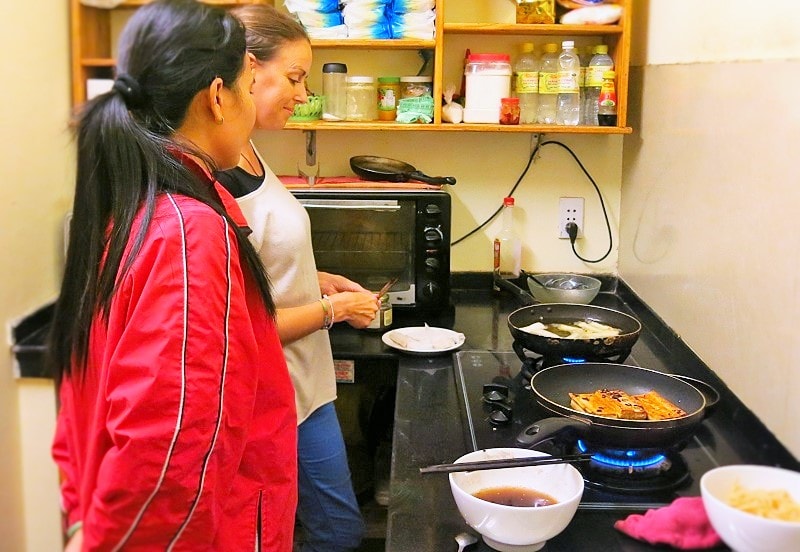 It’s a dish shrouded in secrecy. In fact, the noodles that give the dish its name are only made by one family in Hoi An, the recipe known only to them.

Even the water used is special; it comes from an ancient Cham well, a remnant of a kingdom whose rule ended in the 18th century. As soon as our host at Loc Phat Homestay – Villa, Linh, mention Cao Lau I knew I had to try it. The noodles were easy enough to obtain, the family that makes them supplies them to local businesses and restaurants. The issue, however, was that as a rule the dish contains pork and there are no exceptions. Lucky for me, Linh was willing to break the rules and teach me a vegan version of Cao lau along with a few other traditional Vietnamese dishes. 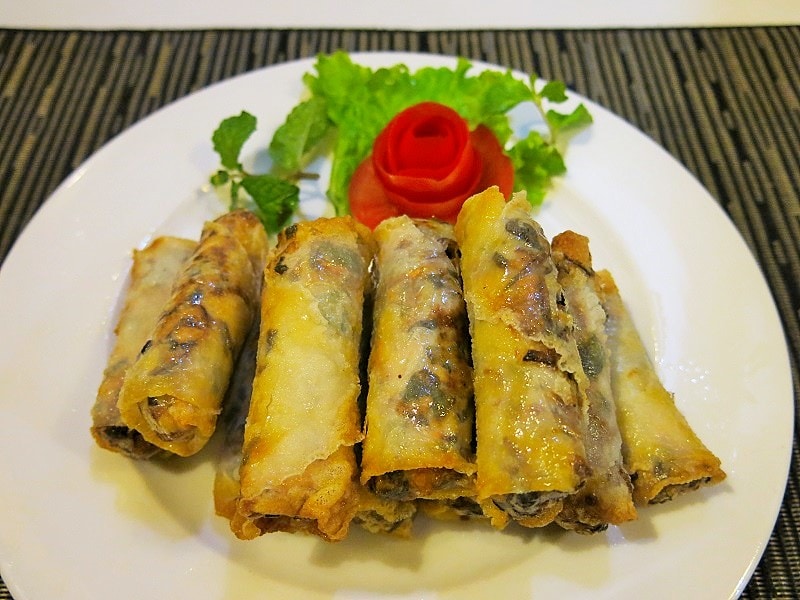 Our eggless, fish-sauce-free spring rolls were delicious rice paper filled pockets of tofu, mushroom, carrot, spring onion, and taro root. After mixing the ingredients together, Linh told me that there is a technique to rolling the spring rolls. She demonstrated by placing a square of rice paper wrapper on a plate in a position so it resembles a diamond. She plopped down a tablespoon of the mixture near the bottom point, wrapped the point over the mixture and rolled it up once, wrapped the left point of the rice paper in then the right, and rolled everything up one more time. The secret to rolling Vietnamese spring rolls lies in the next step. You must tuck the edges of each side in and then make one final roll to close the package. My first attempt led me to realize that Linh has probably been making these spring rolls for most of her life and once we filled the plate it was obvious which rolls were hers and which were mine. Linh explained that although many western visitors tend to eat spring rolls often when in Vietnam, for Vietnamese they are reserved for special occasions. We then added the spring rolls to hot oil and left them to fry over medium heat while we prepared the other two dishes. 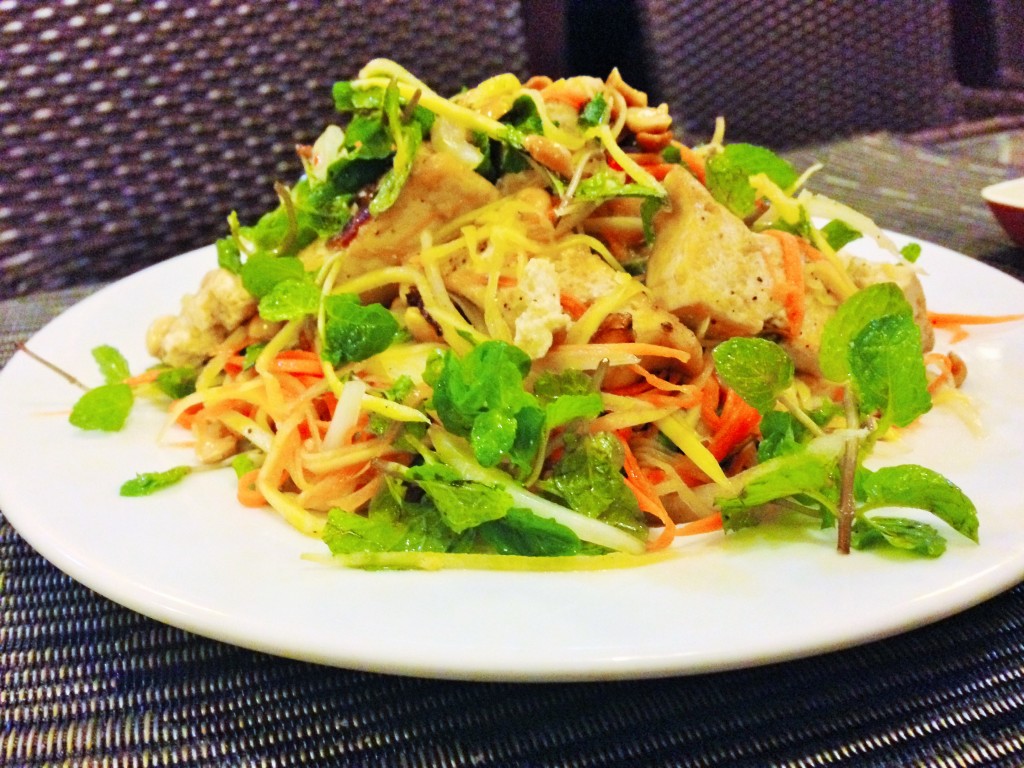 Similar to Thailand’s Green Papaya Salad, the Vietnamese version uses green mango and typically contains shrimp. Instead we marinated and fried tofu as the replacement. We then grated the mango, onions, and carrots and combined everything with a homemade ginger, chili, and soy sauce dressing. Topped the mixture with the tofu, some peanuts, and bean sprouts and set it aside. 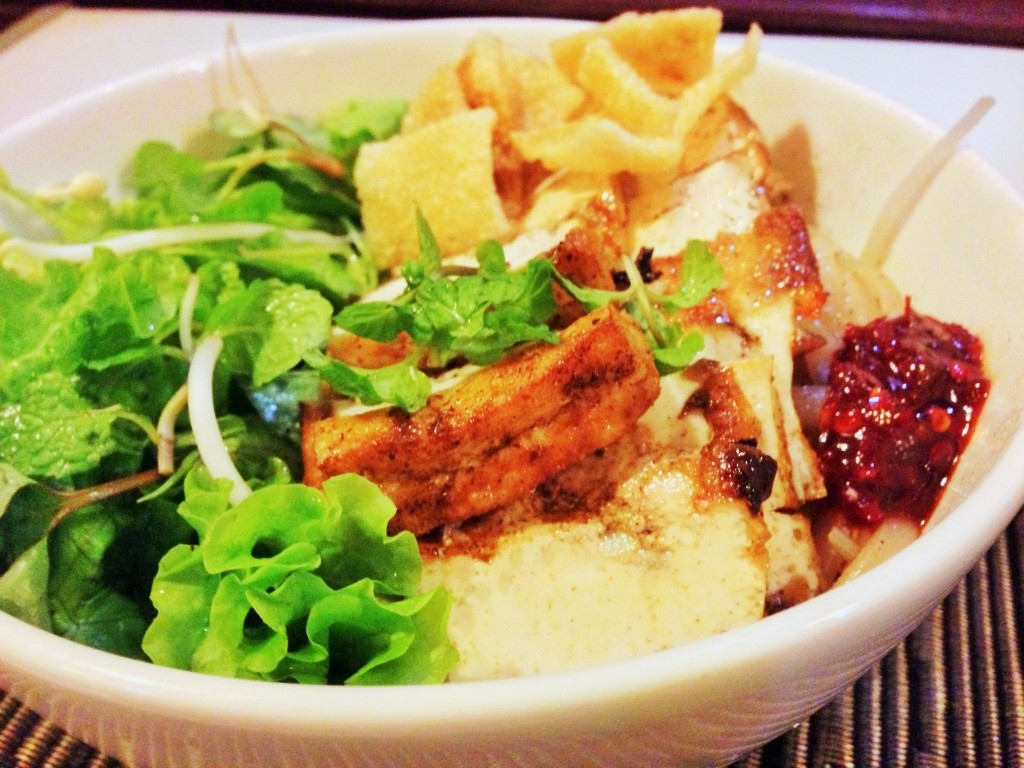 ​What makes Cao Lau unique, aside from the noodles, is the use of Chinese Five Spice and cinnamon in the marinade for the tofu. After marinating the tofu for about 15 minutes we fried it on low heat for 15 minutes on each side, sliced it on a diagonal, and set aside for later. We added water to the pan along with the remaining marinade and boiled it. Noodles and bean sprouts were added and boiled for about a minute and the dish was ready. It was served in a bowl with lettuce and topped with the sliced tofu and some fried croutons made from the same dough the Cao Lau is made from.

Linh mentioned a number of times over the course of making the dish that it always contains pork and that we are are altering the recipe only because I am vegan. I think she might have been trying to convince me to try the real version or perhaps she felt like I was missing out because of my chosen lifestyle. However, the end result was utterly and fully satisfying and not for one moment while I was slurping it down did I long for anything else. The cinnamon and five spice flavored tofu instantly conjured memories of holiday seasons past. The lettuce added a crunchy and fresh flavor and the noodles had a wonderfully chewy texture, like perfectly al dente pasta.

​The mango salad was spicy, refreshing, and full flavored. The spring rolls, which are much smaller than their Thai cousin, were tiny treats bursting with flavor and accompanied with soy sauce and sliced spicy chili peppers for dipping. We, of course, prepared too much food and even though everything was delicious and Michael joined me to share the meal we could not finish everything.

Often times when traveling as a vegan I’m not able to try local dishes because of the ingredients that are used. So, being able to not only sample these dishes but also learning to make them and see how simple and easy they are to prepare was a huge treat. I feel lucky to have had a private cooking lesson with Linh at Loc Phat Homestay – Villa and can’t wait to cook these dishes when I’m craving a little taste of Vietnam.

Coming from a non-vegan Vietnamese myself, I think is is so awesome!! I always try and tell my veggie friends how veggie friendly Vietnamese cuisine can be. My aunt is vegetarian and she cooks this stuff all the time! :) thanks for sharing.

Thank you for sharing that! I'm so happy you liked the article. There was so much great vegan and vegetarian food in Vietnam. We loved it.